About a month ago, I posted about how I use a Nikon 300mm f:2.8 manual camera lens with a Mod 3C night vision for taking images with my phone.  The typical way of connecting the lens to the NVD is to use a Nikon to C-mount adapter.  But I discovered a less expensive mechanism that is also more versatile.  I find myself using it much more often than the Nikon adapter.

For this system, I found an Ebay off-brand Nikon F mount to M42 (same as TT or T2) male thread adapter that has a short optical path of about 8mm.  Then I apply a ScopeStuff C-mount to M42 adapter that screws directly into the NVD (Night Vision Device).  Changing camera lenses with this system is just like changing them on a camera body; push a release button and twist the F-mount lens.  Here is a photo of the lens attached to the NVD and the iPhone attached to the NVD. 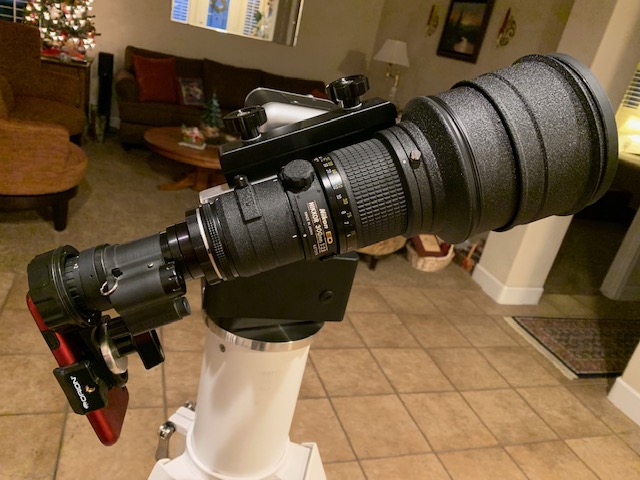 You can see a series of photos taken with this system, including the Pelican, N.A., Heart, California, IC 1318B (associated with Gamma Cygni), Soul and Gamma Cygni Nebulae here: 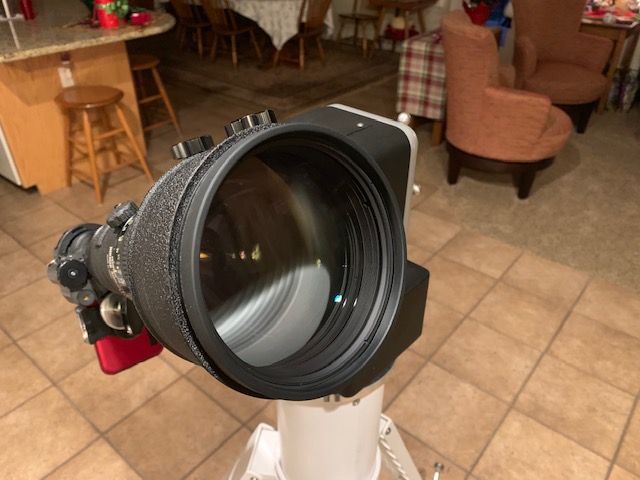 The ONLY drawback is that it cannot use a diagonal... so it is a straight through, neck craning, trifocal experience for its 70 yr. old user!  But it's hard to argue with the photo results it produces.

Now, I said that the adapter I cobbled together was more versatile.  Using another ScopeStuff adapter called a filter capture ring, I am able to place an IR or H-a filter very close to the C-mount connection at the NVD.  This close connection prevents vignetting and so far, I have not seen any sign of band-shift... both a big plus when taking photos in H-a.

I also use this adapter to make the camera lens a small, potent scope... using a diagonal!  I read an article a few years ago about a "proof of concept" using a .965" diagonal mounted to a rear lens cap on camera lenses.  So I set about making a system that does perform very well.  I used a generic .965 diagonal body, removing the nose and eyepiece holder.  The eyepiece holder side of the diagonal has C-mount threads.  The barrel/nose side has some odd metric thread.  I removed the barrel/nose, and parted it off near the base where it screws into the diagonal then took it to a machine shop to have it threaded to match the threads on my old Pentax .965" Ortho eyepieces, sans their barrel.  To change eyepieces, I must unscrew it from the diagonal to then screw in another.  This is more time consuming than dropping an eyepiece into a diagonal, but it works OK and makes a very secure system. 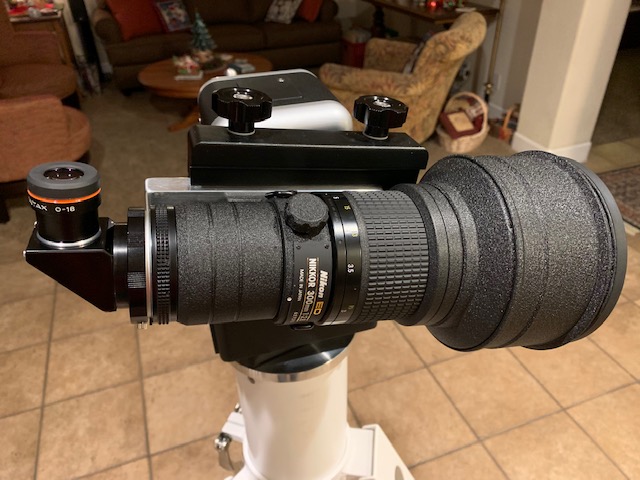 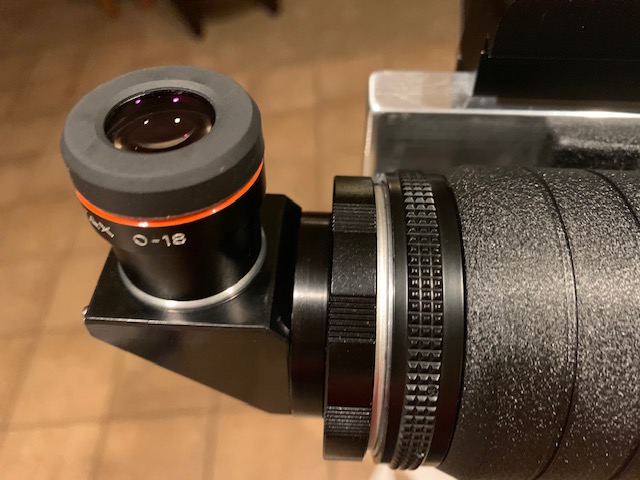 How's the image?  It is excellent.  I made and attached a Vixen size dovetail for the lens to mount on my AZ Pro for GoTo, but it also fits a light CF tripod with a small alt/az mount that I made.  So it is providing some excellent low to mid-power views.  I have used the 18mm eyepiece and I have tried but not really used 6 & 7mm eyepieces.  They all perform well.  I have also used a Nikon 1.4x teleconverter with the lens and diagonal assembly which extends the reach of this tiny telescope.  With the 7 & 18mm eyepieces and the 1.4x teleconverter, magnification can range from 16x to 60x.

I've always thought it is a benefit when our tools can do double or triple duty.  If you are interested in making one of your old, manual camera lenses into a more useful bit of astro kit, but you don't have the means to make the parts, there is a Kenko adapter that will turn your camera lens into a spotting scope... the only downside is a non-changeable 10mm eyepiece... but they are made to mount to all major brand camera lenses.  Here's a link to the Nikon model:

Ray - what a nifty setup! Is that a tracking mount - I can’t tell what it is and how is the lens attached to mount?

Your photos are terrific. I have a 300mm f/4.5 that I use hand-held. I have neck and spine issues and it would kill me in trying to look straight thru at various angles.

Yes, straight through for observing is not a good option for my age group or for those with neck or spine injuries... looking at zenith is worst.

The mount it is attached to is an iOptron AZ Pro, that is attached to a portable pier I built several years ago.  It's very stout and allows the AZ Pro to reach its maximum suggested payload of 30+ lbs.

The Nikon 300 lens has a mounting foot with a 1/4"x20tpi threaded hole for mounting to a standard tripod.  I drilled and tapped a second hole in the foot then attached a Vixen size dovetail that I made from solid 1/2" thick aluminum. 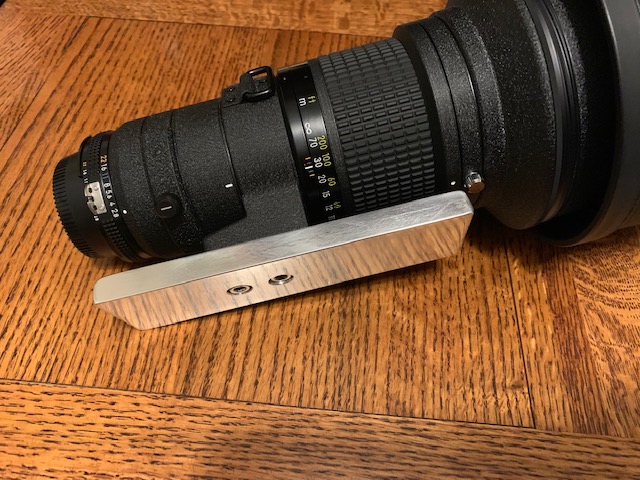 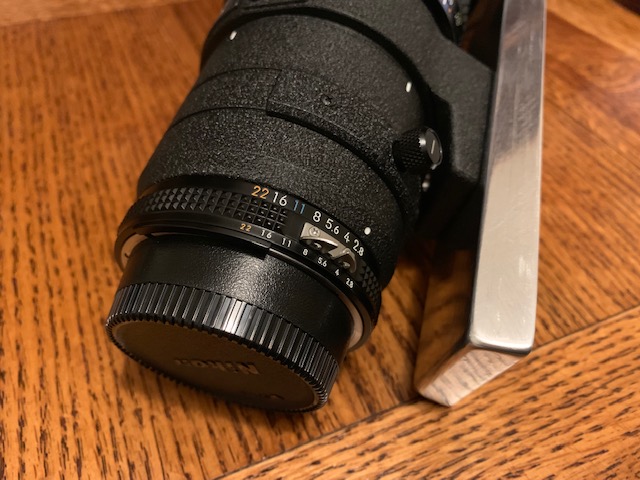 Very nice, thanks for sharing. A couple evenings ago I used my PVS-7 with a 135mm Pentax telephoto lens, and I see how a longer fl lens could be a handy tool. I previously looked into 300mm Pentax telephoto lenses, but then I took another route, and using what I have in house (my small classics telescopes collection), I came up with a somewhat similar setup to yours. The telescope is Vixen-made and of rather good quality for its design. If I did not have it, I would be looking for a 300 mm tele lens too.


Also tagged with one or more of these keywords: NV, refractor, astrophotography