I would like to clear one thing on this, I have finally measured the diameter of the 127mm Mak Cass and it is NOT undersized. The optical surface of the primary is 129mm in diameter. Having measured this I can assure that all our Mak primaries are larger then their listed apertures.

When folks mention under-sized mirrors, I don't think they mean their mirrors are sub-127mm, I think they mean the mirror isn't large enough to capture the divergent rays from the meniscus, and therefore the (Synta) scopes' functional aperture is reduced to 118mm.

I remeasured this again and the primary is 132mm in diameter. Caliper was off and needed to be reset.

I remeasured this again and the primary is 132mm in diameter. Caliper was off and needed to be reset.

That's good to know. So what accounts for the 118mm operating aperture for Synta 127's that people, including myself, have observed with the flashlight test?

That's good to know. So what accounts for the 118mm operating aperture for Synta 127's that people, including myself, have observed with the flashlight test?

In my case, and after extensive testing with lasers and the moon with the older version of the Orion 150 MCT bought on closeout just prior to their disappearance from the market, the vignetting was on the secondary baffle. Kind of ironic as some folks would say the "cheap" baffle was inadequate. Turns out, it was too tight (so I removed it). I cannot speak for the reintroduced versions, but by all accounts the baffle system was redesigned. In a monster thread years ago, I do not recall if this was true for the 127 or not. However, I am very sure folks did not mention the secondary baffle as a problem. So, emphasis was on the primary mirror, but I am not sure if anyone actually measured them at the time. So, another source of potential vignetting is on the secondary. Again, I do not know if this is a "problem" with the 127mm. I say "problem", but the scopes are fine, actually, as is and not sure anyone will notice a small difference in aperture.

In the interest of sussing a little of this out, I removed the secondary baffle from my Orion (Synta) gray-tubed (older) 127, including the foam ring and it's glue. No difference in the flashlight aperture test before and after, with the aperture measuring 115mm before and after (mine appears to be smaller than other peoples) before and after. I didn't measure the primary diameter, but I assume mine measure 115 instead of 118 because of the bevel on the mirror...

I had mine within 2" of the paper when I did that test. I wonder if distance from the screen may cause difference in the diameter measured..

No matter, the scope is a dandy and isn't deficient to my mind at all.

I had mine within 2" of the paper when I did that test. I wonder if distance from the screen may cause difference in the diameter measured..

No matter, the scope is a dandy and isn't deficient to my mind at all.

How did you square the laser to the optical axis, especially while "panning" it across the aperture?

How did you square the laser to the optical axis, especially while "panning" it across the aperture?

I used a wooden ruler across the OTA, and a block squared to the ruler with the laser pointer flush against it. It's about as accurate as I could make the jig to square the laser pointer - not a laser collimator which are known to have some deviation. I suppose you could use a well collimated one, and there is no guarantee the laser pointer is spot on, either. So, there is some error, but work to make it (the beam) as square as possible to the jig, which in turn is square to the OTA across the front of the meniscus.

Even if there was some error, the test was consistent with others showing the reduced aperture at the baffle, including the "ruler intrusion test" by dropping it in front of the meniscus into a defocused star at the center of the FOV. It was also consistent with the flashlight test showing 5mm smaller radius (10mm diameter) of the effective aperture. And a few other tests, such as observing the moon as it crossed the low power FOV and began to shine on the outside of the secondary baffle. 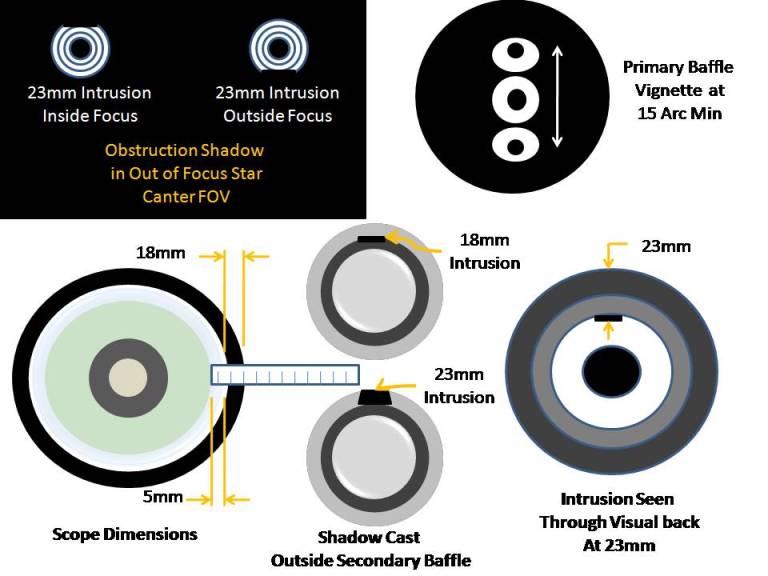 Just getting back to your original post, there are currently two perfect 'double stars' that are visible and are always interesting and useful for viewing the Airy discs and first ring.  If my memory serves me correctly, the diameter of the visible Airy disc in seconds of a degree, is 120 divided by the telescope's diameter in mm's. (Dawes limit)  This can be  confirmed when you view the discs of a double star as you can then directly compare the disk diameters to the known separation in seconds of a degree.

Castor in Gemini is a fairly bright double of 1.6M and consists of a 1.9M and 3M pair that are currently separated by 5.25".  Although not a test for a 127mm Mak, it is a great double star to view the Airy discs and first ring components of two close 'in focus' star images at the same time.  In my SW 127mm Mak, I see the Airy disc and one brightish ring around each of the two stars.  Very close examination reveals a very faint second ring.

At the other extreme, is the double star Orion 52 that is 5.3M and consists of two 6M stars separated by 1" that is a bit of a test for the 127mm Mak and the sky conditions.  In my Mak I can see this double as two very close/touching Airy discs with a single faint 'oval' ring around both stars.  At this magnitude and separation, the rings are not really bright enough to be seen between the two Airy discs.  Depending upon the sky conditions this double star can be a bit difficult for a 127mm scope but last night the two discs were obvious and this was confirmed by checking the current position angle of the pair at 220 degrees.

For viewing these doubles, I was using pairs of 6.4mm and 9.7mm Meade eyepieces and a Celestron binoviewer through my SW 127mm Mak.  You should probably use a no longer than a 12mm to 13mm eyepiece in a 127mm Mak in order to begin to be able to see the disk and ring clearly. They are much easier to see in my shorter 9.7mm and 6.4mm eyepieces.  The sketch in Post 11 is a perfect 'illustration' of what you should be seeing on a good night.

Hopefully you are having clear skies and can view these two contrasting double stars and their respective Airy discs and first rings.