There now exist a new impact crater on the farside of the Moon, where the DSLWP-B microsatellite was responsible. Below, possibly the last image recorded by the microsatellite at 13:24 UT, showing a view of an over-exposed Earth.

I suspect LRO will eventually do a search for the impact in future periods when it is generally over the target area. 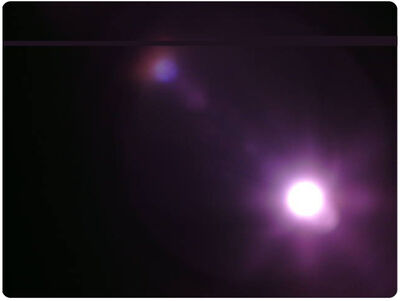 As of 7 August 2019, both Lander and Rover have no powered down again at end of lunar day 8. The rover is believed to have travelled some 33 metres during the period, bringing the total distance so far to date to some 271 metres. Below, a northwest view from CLEP, while the wonderful map is that from Prof. Phil Stooke. 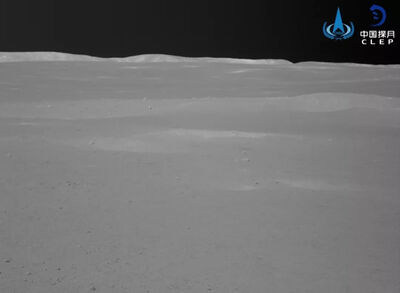 Lunar day 9 begun on Saturday 24 August, 2019 for both the Lander and Yutu 2 Rover. Top view below shows some tracks taken during Lunar day 8, while the bottom image shows some small boulders in impact craters. 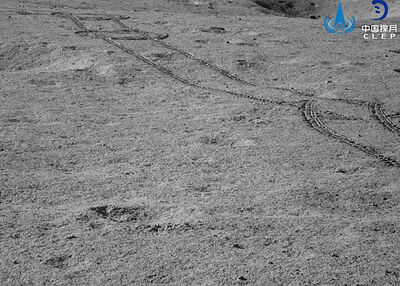 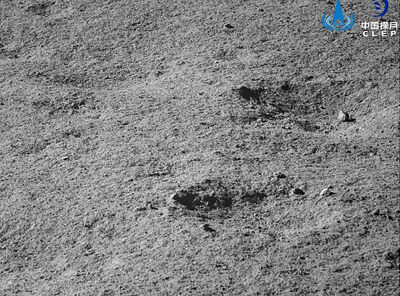 Btw, roughly two weeks ago, the VNIS (Visual Near Infrared Spectrometer) instrument detected what was titled as a 'gel-like' substance in a small crater. As the  first observations weren't satisfactory, the engineers took a second view, and the two bottom images below show the result. It's been suggested that it might be just impact-melt due to a small meteorite that initially caused the crater, else, it is volcanic glass dolloped in to the crater from some other source (note, the red lines are just target, positional points to show where the melt/glass lies). 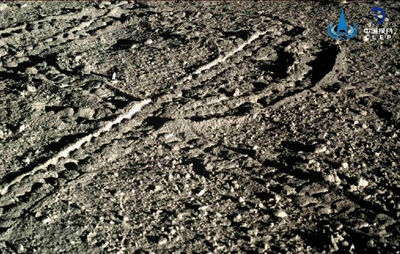 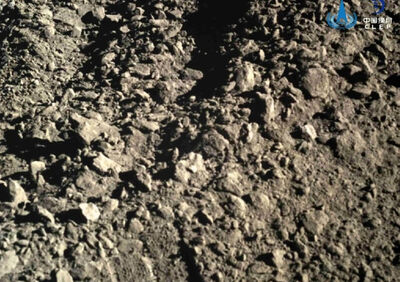 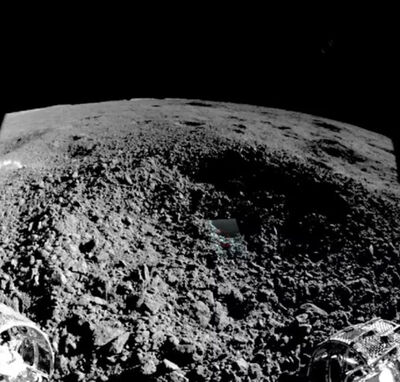 The below image shows the back-track that the Yutu-2 Rover had to make (because its initial observational data wasn't satisfactory), before finally progressing on to a second observation (mentioned above). The so-called 'gel-like' substance (impact-melt/volcanic glass) is approximately at near top of image.

Second image below: more detail on the possible, centred region

My take is that the "gel-like substance" is meant to describe "vitreous" and it's either from volcanic or impact-melt processes.

Bill, it really is open to interpretation! For those of us who don't know the Chinese language (Google-lized in part above), let alone the geological processes, it can sometimes be mis-leading, but your guess, as well as the China engineers' guess, is just as good/possible/plausible if applicable, I don't know

While it appears that the rover travelled very little in recent lunar days, a camera onboard took a closer look at the so-called 'gel-like substance found in a small crater.

The images below were taken by Yutu 2 after roving some 290 metres. What's nice about the tracks in the mid-foreground, however, is how busy they get as they approached the small impact crater (on right), which contains the possible impact-glass substance.

Compare, also, the impact debris near the crater to other, similarly-sized craters nearby and in the distance, where such debris (with exception to what looks like a smaller crater off to the left of image) is missing. A sign, perhaps, that the impact crater (with the impact-glass) is certainly younger than those others nearby. 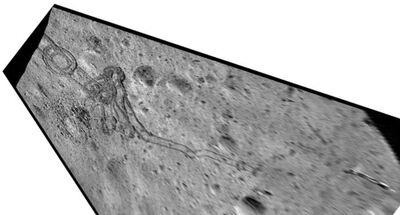 The most interesting photo I've seen from this endeavour, complete with storyline.

Brian, thanks, and I love seeing the Lander in the distance, as well as Yutu 2's distant tracks.

Is it too cheeky to suggest that the Chang-e 4 landing location, and then the Rover's rove direction was lucky to have stumbled upon such a relatively fresh-looking (though small), impact crater? I think so!

PS. Due to CN's image-upload limitations (sigh), there is a much closer view of the same here.

Brian, thanks, and I love seeing the Lander in the distance, as well as Yutu 2's distant tracks.

Due to CN's image-upload limitations (sigh), there is a much closer view of the same here.

Thanks for that link John and wow!  Must be false colour on the camera because I see patchy areas of thin rusty browns across a landscape of green when I can't say I can detect colour on the moon. Perhaps with more experience...

The lander in the background is a great tie in and the background right of that crests and shows the farther hills in a much softer or muted way. Spectacular photo really.

Yeah, Brian, I was wondering also if such 'rusty' colourations were indeed actual.

I did, in the past, saturate such views (intensify the colours of previous Yutu 2 surface images beyond normal colour parameters that we're used to), which, in effect, intensified the lunar surface colours of track and features.

But in the end, came to the conclusion that it might just be an onboard camera calibration issue-of-sorts. But, don't quote me on that, as you could still be right on the whole surface colouration issue.

There is talk that a camera onboard the rover may be experiencing some sensor damage, where 'lines' (below highlighted) are showing up in two recent images taken. They might be a bit hard to see in the below attached, however, this link shows them somewhat closer.

Lunar day 11 ends with both the Lander and Yutu 2 Rover having powering down to maintain heat for components and instruments ahead of the cold temperatures for the next approximate two weeks.

While the rover travelled some 5.1 metres on day 10 last (hinting that there might have been something wrong with it), those fears are allayed for now, as during day 11, it travelled some 28.85 metres.

Overall to date, the rover has travelled 318.6 metres on the crater's floor, and now is said to lie 218.11 metres approximately northwest of the lander.

Below, another track image. 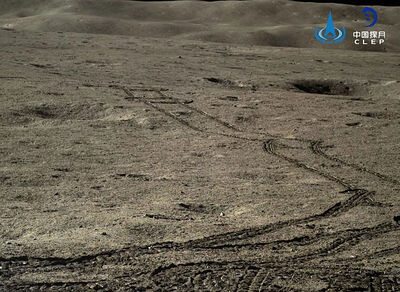 Looks like LRO has located the impact site of the DSLWP-B (Longjiang-2) spacecraft, after it crashed some four months ago on to the lunar surface. The LRO article says it all, so will avoid repetition.

While both the Lander and Rover are roughly midway through lunar day 12 below on the surface, the QueQiao communications satellite currently in an L2 orbit overhead at the farside of the moon has started one of its onboard scientific instruments, called the Netherlands-China Low Frequency Explorer (NCLE).

NCLE, essentially, is a radio telescope, and besides doing tasks of, say, mapping the radio sky, detection of solar storms etc.,, the instrument will also be able to look back at early signals from the Big Bang.

As Marc Klein Wolt, managing director of the Radboud Radio Lab and leader of the Dutch team, says "The moon night is ours, now".

Image below shows one of three antennas that unfolded to collect such week radio signals. On first attempt, the unfolding process progressed smoothly, but difficulties later set in. This doesn't mean the end of use for the instrument as some data was collected, so the science team decided to retract the antennas for another unfolding attempt at a later point in time.

An article here on IEEE Spectrum by Andrew Jones about the NCLE instrument (as the illustration below isn't credited, assume IEEE Spectrum)

Below, the latest Yutu 2 travel map updated by Prof. Stooke.

What is the motive to the selected travel direction?

The motive: might be a cross between avoiding the least amount of hazards that the rover could get stuck in (see post 43 ); the least amount of doughnut manoeuvres to be done; and finally features of interest like fresh impacted soil, rocks and craters to go to for further inspection...etc.

PS. The above map seems to overshoot in my browser, so I hope you are seeing appropriately better to suit your screen size (I tried reloading up a smaller version, but it still seems to be way too enlarged, so sorry).

Thanks for the motive factors John. Your image does overshoot in my browser as well, better than being clipped I think.

These days, all we're really seeing mostly is track images, so perhaps the engineers will stay on track (pardon the pun) towards that crater southwards. I estimate it would take about 2 to 3 more lunar days (that is, roughly another 48 to 60 earth days), so fingers crossed, if they consider it. However, that said, again hazards and other features of interest might dictate another direction.