The telescope has an interesting history, it was purchased by the MacMilan planetarium in Vancouver, Canada in the early '80's I believe

I was a volunteer at the Gordon Southam Observatory in Vancouver for a few years, and spent many nights with this scope, often by myself.

I had my best view of Mars during the 1988 opposition through this instrument.

Congratulations on finding it, and restoring it to what it should be.

I was a volunteer at the Gordon Southam Observatory in Vancouver for a few years, and spent many nights with this scope, often by myself.

I had my best view of Mars during the 1988 opposition through this instrument.

Congratulations on finding it, and restoring it to what it should be.

Steve, great to hear from you! I've heard from others who have used the telescope; Gary Seronik, Ken Hweit-White, Roberto Abraham and Dan Collier. I'm encouraging all, and now you, to send me any history details, images and stories of the telescope's time in Vancouver. My personal contact is peter at ceravolo dot com.

@Peter: are you redefining "Grab 'n go" with that pump truck?

@Peter: are you redefining "Grab 'n go" with that pump truck?

Yes! The Zeiss Coudé, the ultimate in transportability! 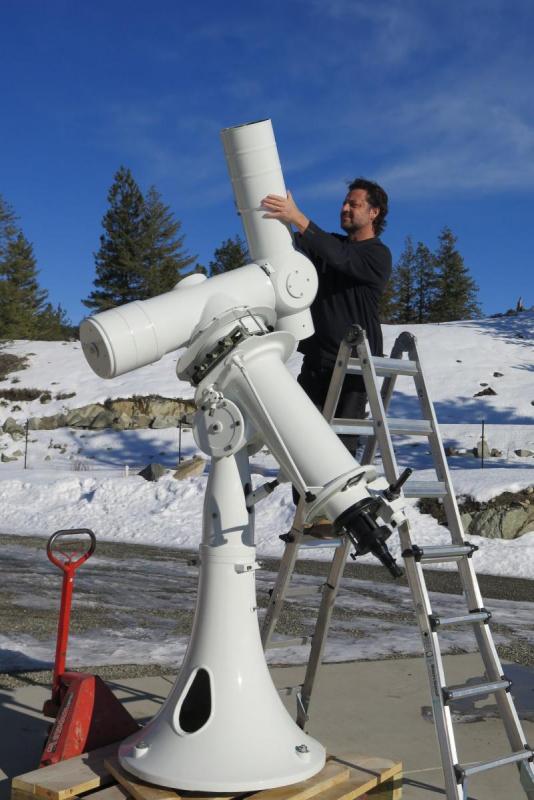 What a beautiful Job!  To dismantle, refurbish, paint, reassemble and get it to work is a very significant accomplishment for such a complex instrument.  In addition to being a renowned “glass pusher”, you can add a “skilled historic telescope restorer” to your resume.

However, I thought this was a scope you didn’t need a ladder to use.

The one part of reassembly I was not looking forward to was installing the big RA counterweight.

With all other parts I did a practice assembly, making sure things fit. I let my guard down with the mother off all counterweights. I had my buddy Ed, (who helped with initial disassembly) come on over to help. We hoisted the thing in place only to discover that it didn't quite fit, it was wedged in place at an odd angle. There was a lip that got painted that caused the interference. The other complication was that the holes did not all line up!

Here is a picture of the weight prior to initial disassembly, the outer countersunk holes that look equally spaced in fact are not, some are out by 3mm in spacing! I was not amused. 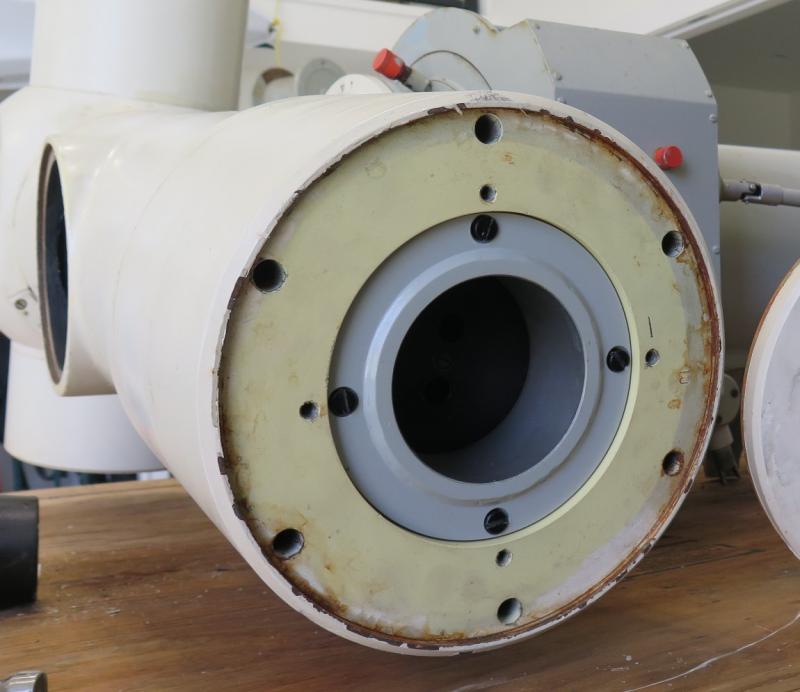 Once the weight was wedged on it required some effort to extract: 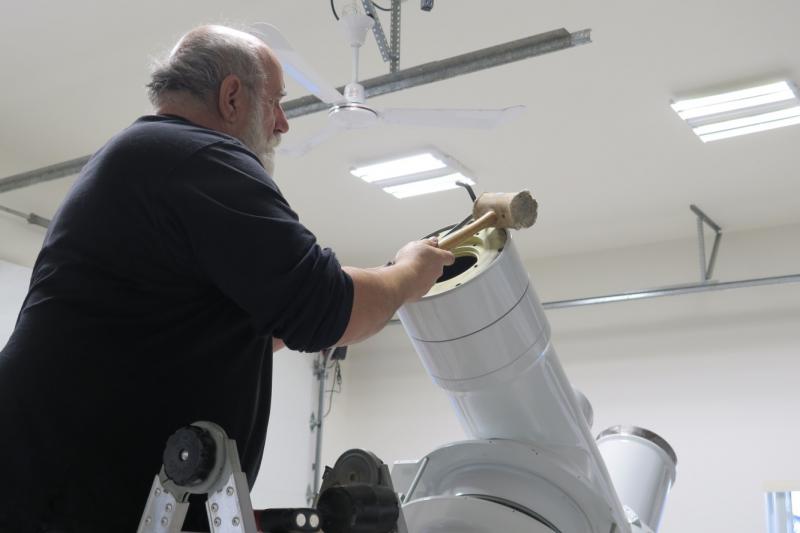 After we worked the weight loose I decided to also remove the counterweight extension tube to determine the preferred orientation. After the layer of paint on the mating lip was removed we tested the fit on the work bench and placed tape markers to set orientation and reinstalled. All that messign around damaged the paint job, but it was expected that this would happen, many paint touch ups are planned. 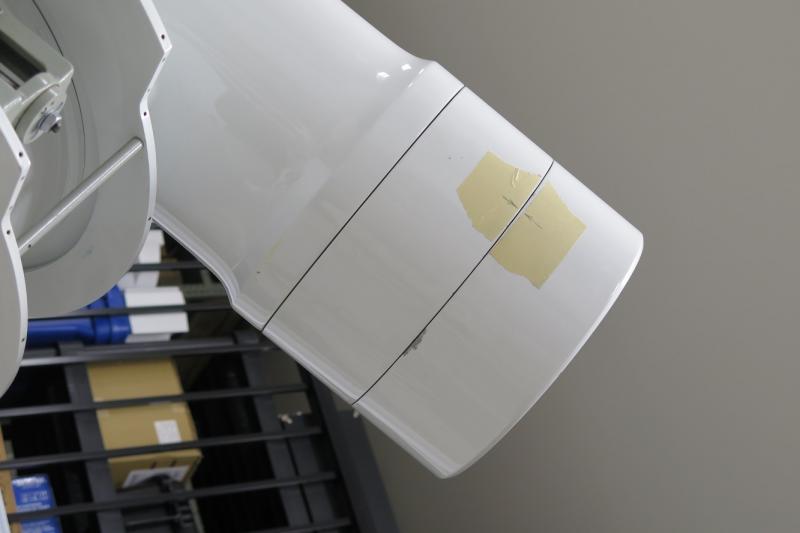 The Zeiss Coudé is an interesting instrument, some difficult components are super precisely machined, while simple things like bolt hole spacing is not. This is the third of fourth component that has exhibited preferential orientation when there is no reason for it. I would imagine they had indexing heads in the mills when these holes were drilled...

I've got a feeling that every instrument will be different.

The Zeiss lens cell is a two component, quite elaborate, affair of precision screws and spherical surfaces and washers that prevent binding when tilt angles are large.

The amusing thing is that, given the Coudé mount components precision machining, I've demonstrated one could have simply bolted the lens cell to the end of the OTA and realized good alignment!

The tall posts in the image, as far as I can tell, are for lifting the actual lens cell off the adjustable plate that bolts to the OTA. 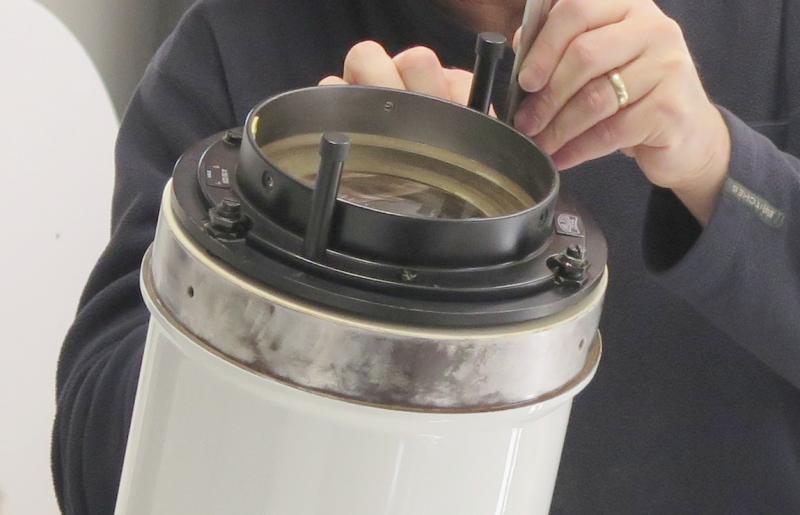 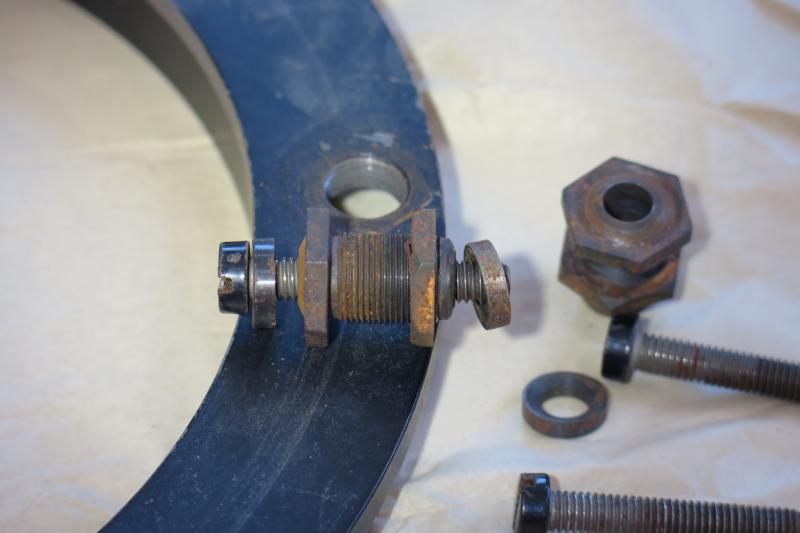 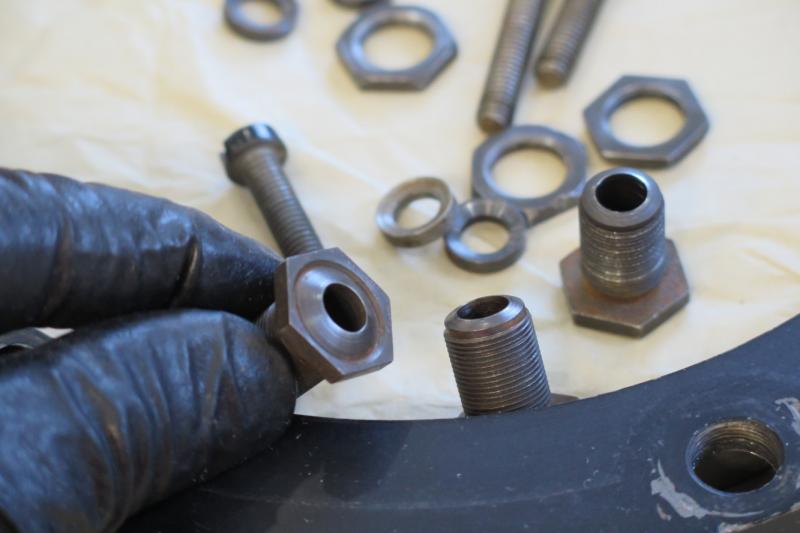 Even the side of the tilt plate has a rounded edge to prevent binding. 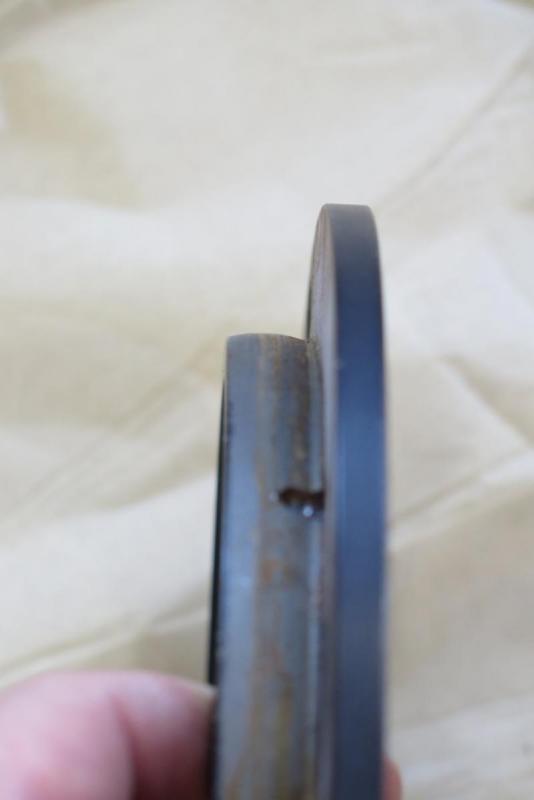 Peter: the short explanation is a mentality I have seen much more in hightech: "only make those parts precise that need to be precise." I vividly remember that I once designed a construction that was bolted against another surface very precisely. Because play due to the coarseness of the matching surfaces of about 500mm2 was not permitted, I proposed to grind and hone them. This was permitted. However, during the reviews, we changed this to three small areas of perhaps 25mm2 each. Why? Milling was relatively cheap, but grinding and honing wasn't thus this was a way to reduce costs while keeping the same functionality.

Same most likely also applies to this Zeiss telescope. A counterweight doesn't require precision and it is not important quality wise if you have to rotate it till all the bolts fit in there. The worm gears for example are, thus the worm gear housing is made very sophisticated.

I found this PDF which you might find interesting, includes some diagrams of the Zeiss Coude 150mm refractor. Judging by the URL, it may be for one installed somewhere in Brazil:

Interesting but that is about the Zeiss West Zeiss Coudé.

I like the west Zeiss design from an observer point of view. Having the option of the eyepiece at the north end of the polar axis removes the observer and other heat sources from their location under the objective.

This non optimal observer position in the east Zeiss has figured into the design of the observatory. I'll post some details on that later.

You may recall the optical tests I conducted on the objective indicated the presence of astigmatism. One can see it in the Rochi test below, an asymmetry in the Ronchi fringes. And stress is visible under cross Polaroids. 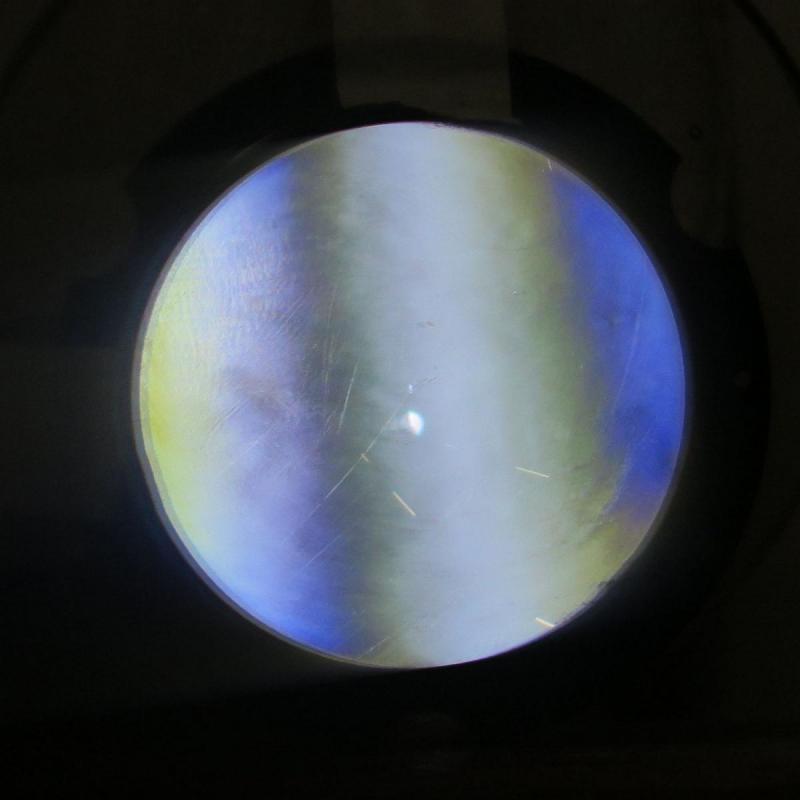 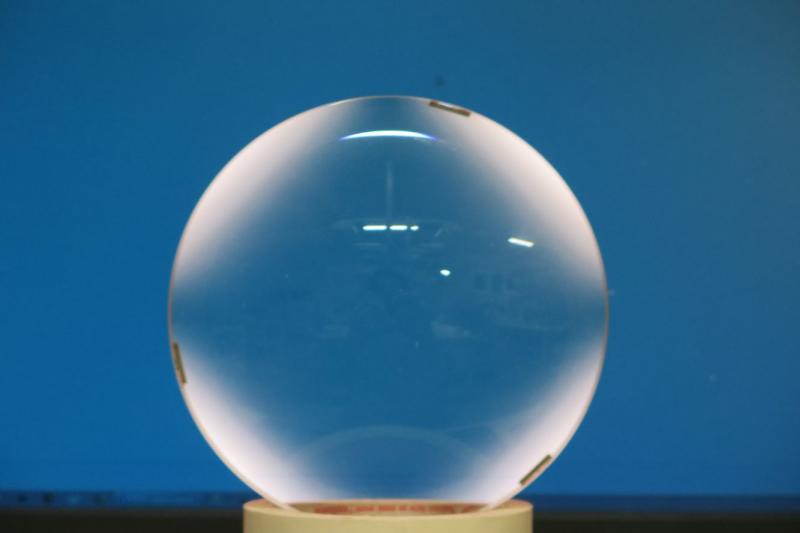 I would expect to see the effects of the distortion in the star images. I did not, at least so far.

Last night the seeing was much better. At 190x I was able to easily discern the airy disk and diffraction rings. There was no sign of astigmatism. I usually do this test by racking the star in and out of focus, looking for elongation in the slightly defocused image. But this was hard to do as the focuser was stiff in the cold and the heavy scope was flexing the wooden skid it was screwed to, causing the star to wander all over the field as I focused.

Overall I'm quite happy with the optics, and the collimation.

But the real, super critical, test will come when the seeing is near perfect (it does happen on this mountain occasionally) and the scope is bolted to the concrete pier.