Very nice looking scope congrats to you all. It's nice to see that these new AT115's are going back to the appearance of the older models like my original AT130

There is an auto focus solution from Moonlight focusers. They will send you a motor and an installation kit. You replace the AT115 EDT finder bracket with a Moonlight provided bracket and the stepper motor attaches to that. You also remove the large focus knob from one side of the focuser to  slip on the Moonlight shaft. It's a bit difficult to install due to tight access for some of the mounting screws but I did it this morning and it appears to work fine. Have not tried it in the field yet however...John

Edit: You also have to get the Moonlight output shaft to be coaxial with the focus shaft. So you need to keep everything loose and gradually tighten the various allen screws while jiggling the parts and feeling for binding. Takes some trial and error but it all lined up in the end.

Loving the silver back-end (IIRC I voted for silver in the straw poll several months ago).  Really interested to see pics of the new AT 150mm CC (wrong forum, I know).

Clear Skies (hey, someday they have to clear!)

Well...here it is all balanced out and perched on the new CEM60EC waiting for tonight's Lunar Eclipse which also happens to be first light! Can't believe the clouds have actually parted and the sky is blue...but it will be cold tonight...lows in the upper teens..I know that is nothing for some of you, but for me it's....brrrrrrr

Wow, John, you are ON it! Making me look like a slacker for sure. It'll be a while before mine is operational. I haven't even ordered the Moonlight yet.

Looking forward to that first light!

Well...here it is all balanced out and perched on the new CEM60EC waiting for tonight's Lunar Eclipse which also happens to be first light! Can't believe the clouds have actually parted and the sky is blue..

Ya, go ahead and rub it in !!!!   It was supposed to be clear blue skies all day and "partly cloudy" as the evening wore on, but it's been been completely overcast since dawn.

First light on the AT115EDT happened last night! The lens appears to be excellent! I could see no signs of CA on the Moon or around stars. The Moon had no color fringing anywhere around the edges. Stars focused to nice points but the seeing was on the poor side so it was hard to fully judge the in-focus view. The collimation was dead on with perfectly concentric diffraction rings that collapsed equally to a point when focused. No sign of any astigmatism or pinched optics (I was worried about the cold weather but it had no noticeable effect on the mirror cell). So I’m very pleased with the optics. However my focuser needs some adjustment. The motion is smooth but the internal tension is  set too high and there is an uneven feel when racking in and out. I’m hoping Astronomics can provide some instructions on how to adjust the focuser. To summarize…optics appear excellent but the focuser needs some TLC. I attached a quick shot of the Moon during mid Umbral portion. Full Eclipse images are still in work.

Posted in imaging forum but thought I'd put it here as well as an AT115EDT sample...

Ok John, it's time to update your scope listing.   And I believe you are really going to like the AT 115.   Mine has proven to be a fine performer.

Astro-Tech has a winner on their hands with the 115 / 130 triplets.  Lots of quality and great views for an easy price for those who can't or don't

want to pay for the high end scopes (TEC, AP, Tak, CFF, etc.)   The value level on these scopes is just great.   Enjoy your new scope. 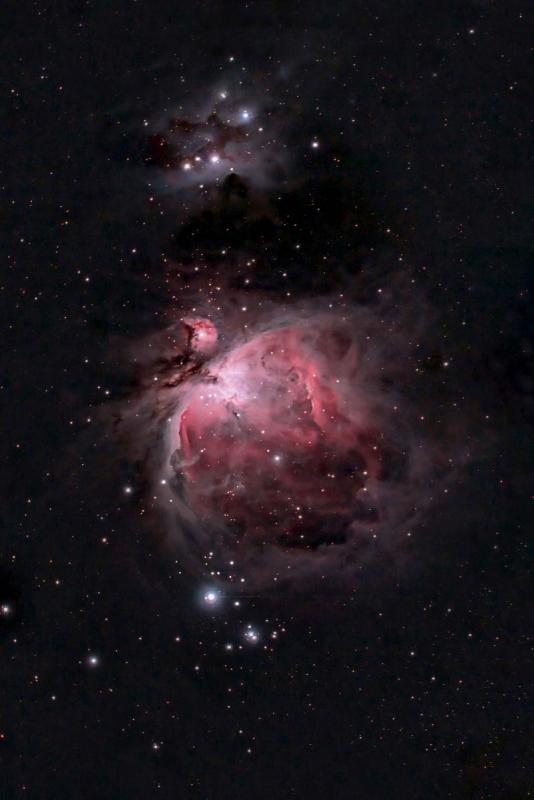 Don't mean to hijack but I loved my AT115. It was the perfect focal length for many objects and the optics were great.  Now I love my AT130.  These Astro Tech refractors are the best bang for the buck there is.  If I didn't already own an AT102, I would jump on the waiting list for the 92. That scope with the case and the extra tuning is a gem.

Is there just a small percentage of people who bought these AT-115's with the Gray Focusers?
This seems like an excellent upgrade to any 4" refractor especially with its new look but no one is talking about them?

A year later, do people still own these and are happy using them?

AFAIK the 115 has been on back order for most of 2019 (I ordered in April), with a big batch arriving around the time you posted. I'm not sure if there were any batches before that with the grey focuser... it's possible this batch was the first.

Mine is out of the box and mounted on a Losmandy AZ8 waiting for the clouds to clear. If they haven't cleared by the weekend I'll have it out on the deck looking at wildlife for first light. If the weather doesn't change drastically I might have to set up an artificial star so I can do a bit of winter observing.

I was very close to changing my order from an AT115 to an AT92 but glad I stayed with the 115 - seems like a much better complement for the 72mm and 80mm I already have. Balanced out on the AZ8 with a 1.25" diagonal and 24mm eyepiece it's still light enough that I can carry scope+mount outside together, although I would probably take them out separately just for the ease.

The 115 is my first triplet (also the first triplet I have lifted or attempted to mount) so it was a bit of a shock when I picked it up and the front end wanted to stay in the box. I know it sounds dumb but I never realized glass was so heavy.