Inconsistency between Pocket Atlas and SkySafari

Published references can simply contain errors. Back in the late '80s or mid-'90s I sent in some corrections to the Peterson Field Guide to the Stars and Planets; if I remember, there was a misidentified illustration of a constellation from an antique atlas, a prominent double star that wasn't charted as such, and I think a couple of other minor glitches. I would have to dig into my storage and see if I still even have that edition. It was still about the best possible compact reference for me at the time.

Mystery solved!  Kunitzsch and Smart, A Dictionary of Modern Star Names, explain that Atik or Atiq is the name of an ASTERISM, "the collarbone of the Pleiades" (?), comprising both omicron and zeta.

Their book is well respected, but as a linguist I couldn't help noticing that their pronunciations are goofy.  They use the symbol "ŭ" (which they define as the vowel in "much") for nearly all occurrences of the letter A, including the first syllable of Algol and the second syllable of Mirfak (which makes a dirty word if pronounced their way).

I think they were missing the concept of schwa (unaccented mid vowel, not the same as short U) but even granting them that, they're overusing it.

This is what someone else posted from A Dictionary of Modern Star Names:

ο Atik: Applied in recent times (also to ζ Per) from an abbreviation of the ind-A name atiq al-thurayya, "the collarbone of the Pleiades," for ο and ζ Per, after their location in the ind-A asterism here. (see β Cass).

First off, what does ind-A mean?  It's mentioned as a name and then an asterism.  Is that "code" for Arabic?

Second, how does a collarbone, or a shoulder relate to the Pleiades?  I believe this is a description of the location of the star or stars in relation to the Pleiades from Ptolemy that was translated as atiq al-thurayya and then abbreviated as Atik.

Fourth, this still dosen't explain why many modern atlas show ζ Per as Atik.  But given my wild imaginings above, it might suggest an answer.  Especially if we take into account the "recent times" comment from A Dictionary...  If Ptolemy really meant both stars to be the collarbone, this was likely well known to contemporaries and a number of later atlas creators.  At some point though, a decision was made to assign the translated/abbreviated Arabic name to one or the other of these stars.  I believe it was the Arabic astronomer Ulug Beg who placed Atik on ο Per on the globe that he used.  Later on down the road others felt that ζ Per made more sense (perhaps because it is brighter than ο, or because it's closer to the Pleiades).

If in fact something like this is close to what actually happened, then there is no error.  It all depends on who you chose to listen to...

I took Ind-A to mean Indo-Arabic, Arabic as spoken in India or transmitting Indian culture, but I don't have the book handy.  The asterism is just a pair of stars north of the Pleiades; I have no idea why they were called a collarbone.  But it does seem to be the case that the name pertained to the pair of stars.  Stellarium uses the name Atik for both stars.

If what you say is correct, and Ind-A = Indo-Arabic, and what I've said about the "collarbone" being a description of these stars in (perpendicular) relation to the Pleiades is correct, the quote from Kunitzsch and Smart is not totally correct.  They are saying the name and the asterism are both Indo-Arabic.  Atiq al-thurayya is very likely Ind-A, but the asterism is very likely from Ptolemy (if he used "collarbone" in the Almagest to describe these stars).  I don't read Latin, so I can't say for sure if Ptolemy used that term to describe both stars (if he did, then he pretty much invented the "collarbone of the Pleiades" asterism).  But it does seem that when Ptolemy's description was translated to Ind-A, the name was used to describe both stars, and then (abbreviated to Atik) assigned to ο Per.

I will look in Ptolemy (who wrote in Greek).  There is a translation of Ptolemy in the Britannica Great Books, also.  Can't get to it right away, though.

According to John Pratt's summary of Ptolemy's star catalog (http://www.johnpratt...lemy_stars.html), Ptolemy calls these stars the left heel and left foot of Taurus.  Presumably the "collarbone of the Pleiades" asterism is Indo-Arabic as the star name book indicates.

I think your right Michael.  I found this when I did an explicit search for "collarbone of the Pleiades" 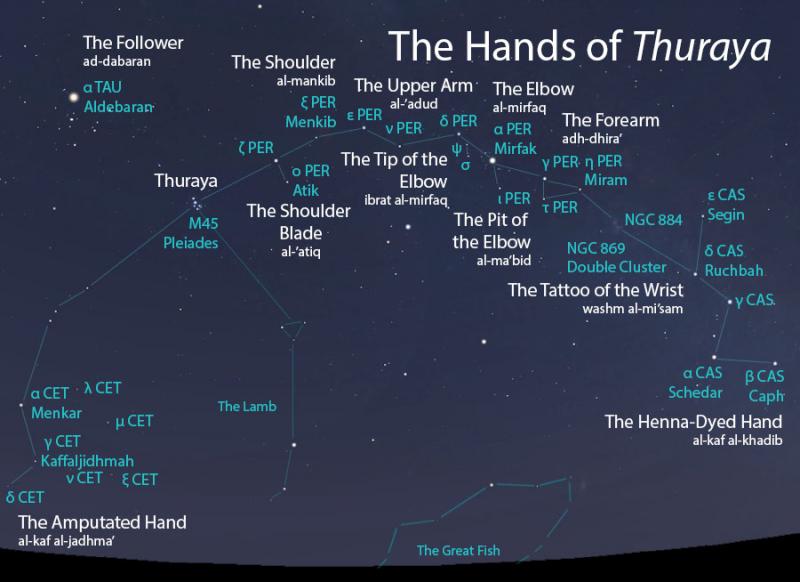 From an article by Danielle Adams:  http://onesky.arizon...of-the-heavens/

The name atiq al-thurayya specifically includes Pleiades = Thuraya, and the asterism pretty cleary shows that the collarbone includes both ζ Per and ο Per.