One image, many catalogs

Not the most interesting image visually, but it was a fun one to research nevertheless.

This area first caught my eye because of the line of open clusters and the variety of catalogs that that these clusters are recorded in. It was a good opportunity for me to learn about these catalogs. Also, there are a couple bright nebulae (Sharpless 168 and 169) in the area. So, my first few subs were oriented to capture the clusters along with the Sharpless nebulae. However, my first Ha subs revealed half of a bright circular object that wasn't shown on my planetarium program. It turned out to be Abell 85. So I changed the picture orientation slightly, choosing to capture all of Abell 85 at the expense of losing the Sharpless objects.
With that background, here is a brief description of the DSOs in the image.

For the Open Clusters, they (mostly) form a line from the top middle of the picture down to the lower right. They are spaced farly uniformly apart. Starting at the top:

There is one more open cluster in the picture, although it is basically impossible to find without a detailed star chart. It is Frolov 1. The book "Star Clusters and How to Observe Them" by Mark Allison describes Frolov 1 as "a tiny, curious little group of 4 or 5 stars visible in a 4" telescope, although a larger instrument will display several more members and reveal some of the fainter background stars. Located just under 3 deg North West of beta Cassiopeiae, the cluster itself is sparse and the brightest member only magnitude 10.6, so the overall appearance is subtle." It has a visual magnitude of 9.2. With the aid of a star chart, I believe that I see the four+ stars that make up the cluster, but I'm not certain.

One last item of interest is a few stars from the Cool Galactic Carbon Stars catalog, compiled by C. B. Stephenson. These stars tend to be very deep red and not particularly bright.

If I had a slightly wider field of view, I could have included the clusters Stock 17 and Czernik 1.

All told, around a dozen DSO catalogs represented in the small slice of space. There are hundreds of other catalogs, but I found this an interesting learning exercise nevertheless.

Fantastic image with a lot going on. I really like it.

The technical card mentions 10 minute RGB's but only (well a lot of them) 2 minute luminance?

That's a great image and, in my opinion, actually quite interesting visually.  Thank you for the detailed write-up concerning the features and all those catalogs.

I had the same question as Dan about the shorter luminance frames.

Also, in your "B" version you say it's "Ha minus the red".  Could you explain that in more detail, please?  I'm not understanding this yet.  Thanks!

Thanks Ben. The "Ha minus red" image is actually a side effect of the PixInsight workflow that I use to combine Ha into the RGB image. I got this recipe off of one of the internet tutorials, but I don't recall which one. I find that I like the results much better than the NBRGBCombination script, although it may be due to pilot error on my part.

The whole Ha combine process involves four steps. The first step is to extract the red channel from the RGB image using the ChannelExtraction process. I don't have that interim image available, but my guess is that it looks like the red master, which was this: 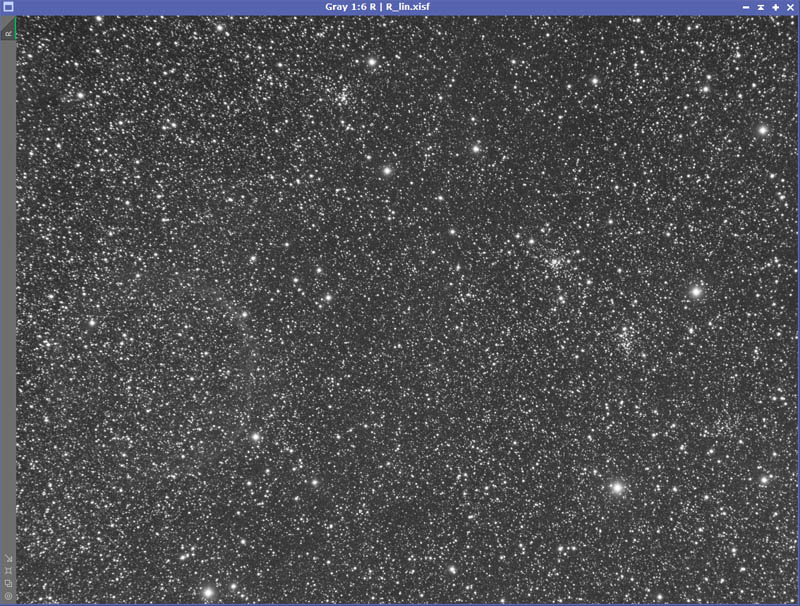 The next step is to use PixelMath to do the subtraction. When you open the PixelMath process, check the "Use a single RGB/K expression" box, then enter the following formula in the RGB/K box:

where Ha is the window name of the Ha master (change as needed), RGB_R is the window name of the extracted red channel from the RGB image (again, change as needed), and the numbers 60 and 5 represent the bandwidth of my Red and Ha filters (60mm and 5mm, respectively). You would also change those values to match your filters' bandpass. With the "create new image" box checked on the PixelMath process, I apply the process to the Ha image. 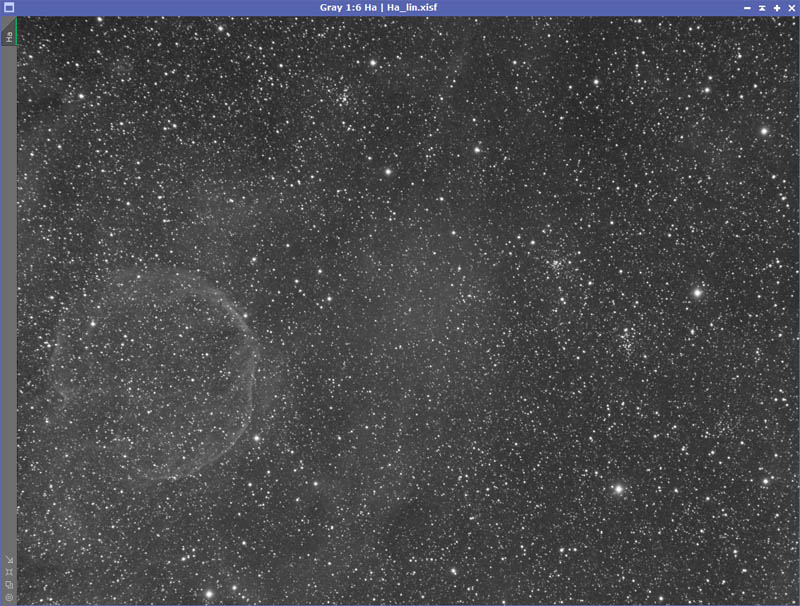 The "Ha minus red" image: 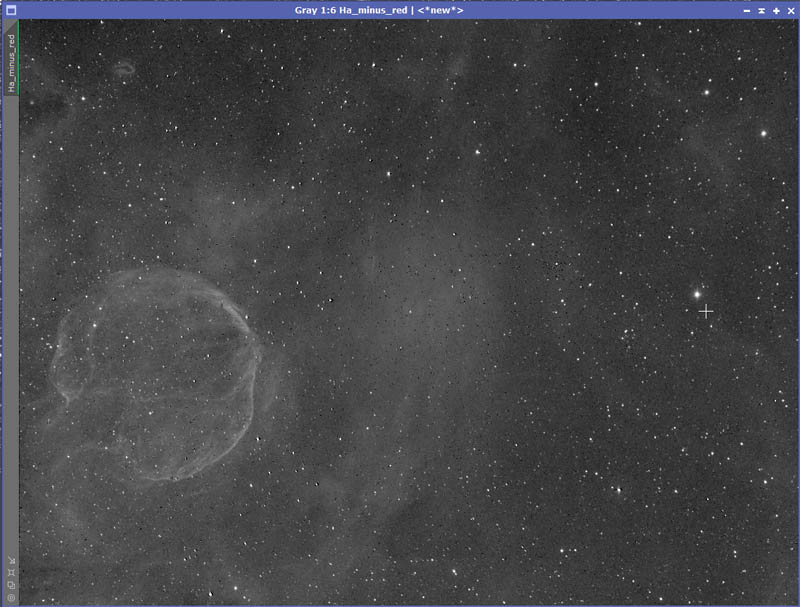 That is my "B" image on Astrobin. Only the brightest stars should be visible in newly created image (which will not look like much except for the Ha areas). If too many stars are visible, then kill the new window, adjust the R_bandwidth (60 in the equation above) to a lower value, then reapply.

Just to complete the description of my Ha combination workflow, the third step is another PixelMath step. I enter the following values:

Leave the “Replace target image” box checked (hidden in the minimized Destination section in the screenshot above), then apply the process to the RGB image. To add more or less Ha enhancement, undo the process, adjust the BoostFactor (more to enhance the Ha, less to reduce it), then reapply the PixelMath process.

The fourth (and last) step is to do another background neutralization on the new RGB image (now an HaRGB image). I create a small preview in a background that doesn’t have any stars or DSOs. Then launch the BackgroundNeutralization process, select the preview as the Reference image, and apply it to the RGB image.

More info than you bargained for, but hopefully this is somewhat useful.

BTW, if you want to remove stars completely, you can try this: https://www.lightvor...s.html#Section3

There are probably other ways of doing that as well. That was not my goal here; I was just looking to enhance the RGB image with some Ha.

Thanks for the explanation, Dave.  That's the level of detail I was interested in.

That's a beautiful image! Love the star field and the colors. Thank you for the detailed annotation of the DSOs.

I have been using a very similar approach for narrowband and RGB combination and like it a lot. The same idea can be applied to luminance and Ha combination. The advantage of this PixelMath technique compared to NBRGBCombination script is that: (1) you see the intermediate Ha image with red continuum excluded and can really fine tune the ratio of Ha to R for optimal enhancement of the Ha signal; (2) you can tune Ha-Red combination for chrominance and Ha-Lum combination for luminance independently and to taste.

Great image and very thorough research on the field.

I was also imaging that same field a couple of months ago.

I just went for the clusters rather than trying to capture the additional hydrogen alpha emissions in the field as well.

Revision B is an annotated version.

Thanks everyone for your comments. Dean, I like your image, it isn't as busy as mine, so it shows off the clusters nicely. For example, Frolov 1 is more readily visible in your image than in mine.

I will definitely have to visit that area again next summer using the h-alpha filter.  I wasn't aware of Abell 85.