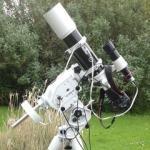 The device has to be defined/connected to INDI, i.e., the computer running indiserver.  The needed module is indi_joystick.  That one does, e.g., detect my Thrustmaster Gamepad GP XID.

How/where are you starting indiverser?

Yeah, I gathered this from various google searches. I've tried poking about in INDI and Tools and can't obviously see how I define the gamepad device.

I assume I click Tools > Devices.   And then where? Device Manager? Custom Drivers?

My Mac knows the gamepad is connected.

Ah! OK. I now see I have to select both my telescope and joystick drivers.

Having tried this I've hit the problem that the indi_joystick driver "was not found".

I get the message : "Please make sure the package that provides the indi_joystick binary is installed"

How do I do that?

Good you found it.  So I assume you're starting indiserver locally on the mac.

I don't have one though, so I can only guess.  On Linux indi_joystick is part of the standard indi installation.  I don't know where yours is coming from.  Either there are separate packages for this on the site where you got it from, or its a driver that is too much tied to the linux kernel and not supported on Mac.  Would be a question for the Mac guys in the INDI forum.

Thanks.  Odd thing is I can select joystick when selecting devices.  But your right, maybe I should join up to the INDI forum and ask there.

Response on the INDI forum is that joystick support is limited to Linux only.

Ekos/INDI supports the Canon 450D just fine. I use it on a 2011 MacBook Pro (El Capitan) with no problems. I also run it all wirelessly with a Raspberry Pi3 with Stellarmate OS at the mount.

Hello Tim. What method do you use to focus your Canon 450D?

Answering my own question on focusing ...... I always used to focus using live view with the telescope pointing at a bright star.  Being 5m from the computer, and not having a remote focuser, it was just easier to focus at the scope in this way.

I've now installed a SkyWatcher autofocuser* on my Evostar 80ED and with a 5m extension cable I can now manually focus using the focus module in EKOS. It works quite well.

* I think I'm right in saying the automatic focus is not possible in EKOS using the SW Autofocuser. Is that right?

All the details here:

But I just remark this driver is unfortunately not include in INDIGO.

I not notice before because I always compile the INDI drivers from source and in this case Eqmod work fine but this is probably a bit difficult to start.

So the best option is to install the last Kstars 3.0 that include recent INDI drivers:

You can start with Kstars as it is a very powerful software with everything integrated, then look if you need one of the other software I mention above.

Just as an update to my progress with KStars, and by way of a thanks to Patrick Chevalley and others who helped me ages ago at the top of this thread, I can report:

At last  I have had some time in August to get KStars/EKOS/INDI installed and configured.  It's working quite well despite a few silly hiccups on  the way.

I succeeded to polar align using the polar alignment routine and use plate solving to sync the mount, both using my guide camera. I have to say I was greatly impressed with plate solving.

KSTARS seems to work quite well with my Canon 450D.  Unfortunately I didn't manage to get a good imaging session because I was dogged with poor skies.

The one remaining thing is to get guiding working. I had a few goes at it, but the patches of clear sky were so intermittent I didn't manage to set it up and test it properly.   So that's my next task.

Again .... Thanks so much for your help.

* I think I'm right in saying the automatic focus is not possible in EKOS using the SW Autofocuser. Is that right?

I'm afraid you're right there.  There isn't even a way to connect a computer to the unit, is it?

If you're looking for a bigger (and more expensive

) solution I can definitely recommend the ZWO EAF, which is nicely supported in INDI.

Good luck on your next steps!

I'm afraid you're right there.  There isn't even a way to connect a computer to the unit, is it?

If you're looking for a bigger (and more expensive

) solution I can definitely recommend the ZWO EAF, which is nicely supported in INDI.

Good luck on your next steps!

.... And I believe the HitecAstro DC Focus controller which serves as an 'interface' between a SW autofocuser and a PC is only compatable with ASCOM and not INDI.

But anyway, as reported above, the SW autofocuser and long cable method works quite well. Quite nice to use something that's not computer driven actually. :-)