From an article I found:

But states have been busy passing legislation in the wake of the Supreme Court’s June 2018 “South Dakota vs Wayfair” ruling, and eBay has added to the list of states for which it said it must collect sales tax.

“Based on applicable tax laws, eBay will calculate, collect, and remit sales tax on behalf of sellers for items shipped to customers in the following states,” it wrote on its help pages, and listed the following 8 states along with the dates it would comply: Minnesota, Washington, Iowa, Connecticut, New Jersey, Alabama, Oklahoma, and Pennsylvania."

I doubt it will be long before all states with a sales tax will be on board.

another RV6.  Everyone has one for sale. This one with a moonlite focuser.  That should be a nice upgrade.  Never liked the focuser on mine.   From our friend Agustus.

IMHO it would have been nicer left unmolested.  It was a sweet survivor.

Me, either.  Do local Goodwill stores charge state sales tax?

Goodwill and other charity stores don't charge sales tax in their brick and mortar stores because they are non-profit.

Outside of antique and thrift stores ( who charge sales tax if for profit), used stuff was pretty much bought party to party in person (like on Craigslist). Probably most regularly held swap meets in CA make vendors fill out a form with their resale number for taxes. One that I used to sell at would wave it if you only sold 3 times a year. Also, companies that run estate sales collect sales tax. That said, some of those probably do what swap meet sellers do, just build it into the price. It's legal to do, but technically it is supposed to be disclosed someway at point of purchase.

There are NO absolutes in discussions of sales tax.  Sales tax is both a state and local tax and laws regarding them are highly varied.  The supreme court case that is bringing about sales tax being charged for out of state purchases is a bit nuanced regarding what companies must collect sales tax for out of state transactions (has to do with size of their annual sales IIRC).

IMHO it would have been nicer left unmolested.  It was a sweet survivor.

The friction-fit drawtube was basically stuck and the rack & pinion was wobbly, not to mention the lack of any kind of set screw. The finderscope provided such dim images that it was difficult to tell where I was.

I don't think the Moonlite ruins the aesthetic of the scope in the slightest, and you could easily get an original finder to put back on or even re-install the original focuser.

Say it is not so.  On used gear?  Never heard of charging tax on used gear.

If you buy something used from a ‘brick-and-morter’ consignment store they charge sales tax. Same with used books at a bookstore.

Meanwhile        Perhaps  sales tax on used stuff on ebay  etc is inevitable as spending policy makers search fertile areas for revenue......will ebay and other online  etc sellers  like Amazon  just add the sales tax on like one might add  a 3 percent paypal?   who knows?

Let me tell you how it will be

If you drive a car, I'll tax the street,
If you try to sit, I'll tax your seat.

If you get too cold I'll tax the heat,
If you take a walk, I'll tax your feet.

I would say that is a bit high for an empty box.

Roger that    point well taken Thanks

Has an upgraded finder, motofocus, counterweight bar, piggyback mount, and in the original trunk. No images of the optics.

I feel the orbit is a good deal if the objective is sound.
I also really like the way the finder mounts. I would love a set of rings like those for my tasco.

Those Obit finder brackets are quite different that what is found on a Sears 6339a, etc scopes.  I like them too.

I feel the orbit is a good deal if the objective is sound.
I also really like the way the finder mounts. I would love a set of rings like those for my tasco.

I have made a few pairs of finder rings that wrap around the main tube, I have one pair left for a 60mm. 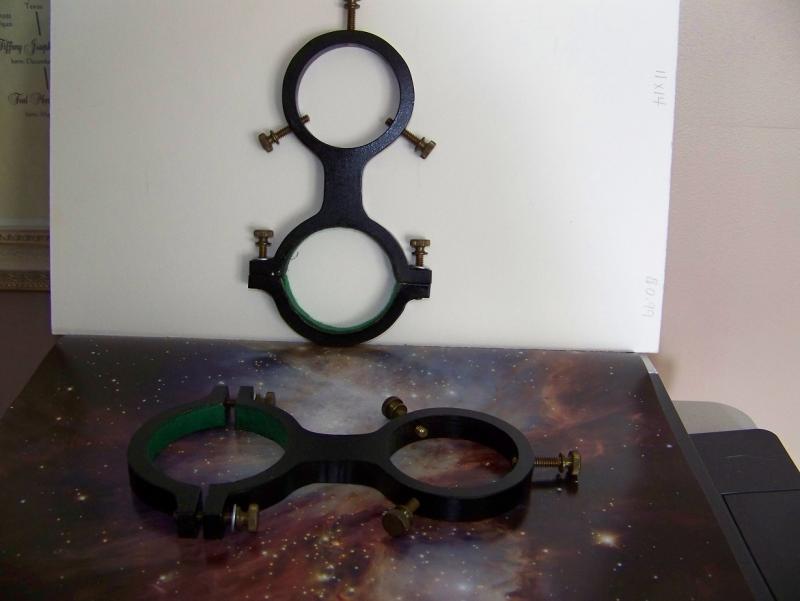 Uncommon Celestron tangent coupler for C8 here on CN. Not to be confused with a tangent arm.

The bottom base is curved to fit the C8, probably other Celestron 8" SCT scopes, and maybe Meade scopes. For mounting camera equipment on the OTA.

Questar Seven. Price not for the faint of heart!

Oh come now Zane,  tell us how you really feel.

Oh come now Zane,  tell us how you really feel.

Packing by a shipper could be at least $30 more.