NGC 2346 is a very difficult  planetary to observe. I worked hard on this one to sort through the confusing signals to finally figure out what it looks like. Let me say that again, "to figure out what it looks like." Only some of the detail came easy, the rest was tough and fleeting. But, I stuck with it despite wanting to give up, already...I just did not think I was going to make much of it. I was wrong. When it was all said and done, I hit wikisky to see how it was oriented in the star field. I was stunned. It all made sense. I did not want to pack it in tonight, but I had a great observation and had to get it sketched while my memory was fresh enough to make sense of my hen scratched notes.

First off, I did not find the planetary all that bright. Very easy to find, though, and obvious non star-like at low magnification. The central star was easy and prominent, spotted it right away. It had a very diffuse glow around it. That was the easy part. I tried different magnifications between 200x and 300x, both with and without the Orion Ultrablock. Detail was popping without the narrow band filter, but I hoped for more with it. So, I settled on 225x with a filter for a while and made some notes. The planetary seems pretty large-ish. It had a faint glow that extended for some distance and was a little brighter toward the center.

During the observation, I finally caught what looked like another very faint star to the west. Then I'd get a better look at one to the south. Then one to the east. I know something was going on, it looked to be knotty or had a double core, but I just could not nail it down. West, east, south? Who knows. But, I keep seeing them and really tried to decide which it was. I thought I was seeing some bifurcation of the core, but I could not tell in what direction.

Even more confusing was the appearance of some elongation to the core region to the SE-NE and then glimpsed another NW-SW. Then I was sure the elongation was east to west. Again, I just could not lock it down. I just keep seeing it, then decided it must be elongated basically east or west and the other elongations were spurious. It was a difficult and confusing observation as almost everything except the faint halo, slightly brighter core, and central star appeared spurious. I even saw some faint indistinct darkenings, I thought those must be spurious, too. But, I often see those in some galaxies, so I was not quite sure. Still, they were all over the place. The image was pretty dim, really, so I figured my eyes are playing tricks and nothing was easy to lock down. It just got confusing.

Really, I was about to give up and just call it. But, I hit it with 300x and the Ultrablock filter. At first, it really made things worse. The scene was dim and I just did not think I could make much of it. But, I was already well dark adapted and already in place with some time on this object. So, I just hung in there for a while longer. I came this far, I'll try this 300x filtered for a bit. I guess there was some improvement with the filter, the sky background was a little darker, but the image was not strikingly different. And, I pretty much saw the same things, including the east to west elongation. Then some elongation skewed in almost an 'X' shape. So, hey, something has to be happening. Then it dawned on me, I was seeing some of the fainter extensions! That explains why the seemingly spurious elongations were symmetrical and forming that 'X' shape around the core! How cool is that?

I decided the bright knot to the west was most prominent and that must be the bifurcation. Okay, so at this point, I had a bright central star, a faint halo, and a slightly EM elongated core and an "X" shape overlaid on it and a bright knot to the west. I guessed I had enough and knew enough to sketch it. Upon checking as many suitable images as I could find, turns out some show other knots to the south and east, too. So, I was both right and wrong. Right that I saw them, and now they made sense...and I was wrong there is no bifurcation I could see. My guess is the darkenings were where the halo dropped off rapidly in brightness and maybe where the hour glass pinches inward. Again, they were all over the place and I was not very sure about any of them. I left them off the sketch, but I think those features gave the impression of some indistinct darkening in the nebula.

I am not sure what else to add other than this was a difficult observation and I worked at it for about an hour (I suppose, time flies...). But, when I checked wikisky with respect the field stars, it all made sense and i was floored I made something of it, after all. I knew I had it. There is a slightly brighter star out of the FOV to the east (right) I used to focus on.

Oh, it was boxed in by several faint field stars. I think around 13 magnitude. So, I included a few of them I recall seeing. There were a lot of stars in the FOV, too. Many I left out because thre were too many to pay attention to. I also did not do a TLM estimation using the Ultrablock filter. Transparency was descent, not majestic, and probably somewhat variable. Seeing was almost perfect.

I also hit IC 418, too. My interest was to attempt to see it's reddish color. Not sure I did. Nice planetary, though. Small and bright, slightly elliptical, and with a very prominent central star(?). 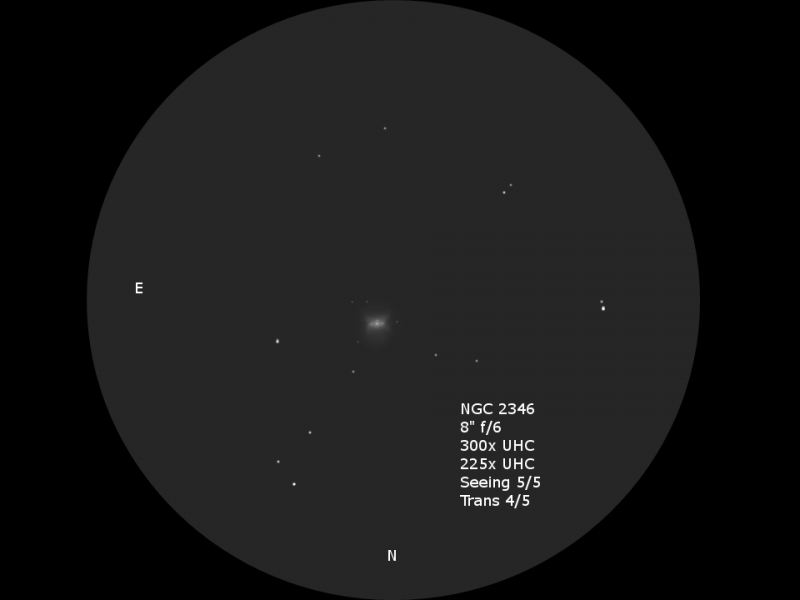 Very nice! I've not seen this one, but it's now on my list.

Very nice! I've not seen this one, but it's now on my list.

Thomas, this one went form bust to boom. I was shocked. I know you can knock it's socks off. Hard to say something so dim and fleeting is beautiful, but when you put it all together - it is beautiful. Godspeed.

Excellent observation, well done! I observed the nebula only once in AS80. At 200x and 235x I saw nothing just faint glow around central stellar brightening (probably central star).

Excellent observation, well done! I observed the nebula only once in AS80. At 200x and 235x I saw nothing just faint glow around central stellar brightening (probably central star).

That's exactly what I saw starting out, a faint glow and a central star. It is not all that bright and almost seemed hopeless. It's about the size of Jupiter and listed at about magnitude 11.9 and 20 mpsas (? which is kind of bright.) Over time detail began to emerge. But it was kind of confusing detail until I realized what it meant.

Here's a fairly close representation of the visual experience.

Here's a great observing report with an 8" scope.

Interestingly he notes the annular appearance is broken to the north (bottom in the sketch) and brighter knots NE and SW (close enough). This broken section may explain why I saw some brightening in the south (top in the sketch.) Maybe it is not a knot to the south after all, rather it's the brighter annular portion across from the darker broken section. He did not see the central star using an OIII filter. His sketch shows much more of the wings than I saw only as a large faint halo. His hour glass, though difficult, is more pronounced than my sketch. But, similar enough to call it good.

Thank you, Alexander and Tom.

Reading some observations, I did not get the blinking effect others might have reported. IC 418 definitely blinked, though. Looking straight at it, it was all but gone. Just a slight averted vision it popped back into view nicely.

One of t h e most intriguing planetary youve done.  I've known of this one and when I saw your drawing though I don't kno it by name I knew what this was.  It is an odd planetary, partially obscured and with that boxy outter envelope breaking into an "X" .  I can see how say co,pared to M57 or 2392 this one's oddness really begs for some time to unfold on its own terms. This may be my favorite of your planetary obs, granted, now with an 8".

Oh the IC planetary... yes that's a bit low in declination for me but gosh I wish to heck it wasnt. There's a few gems that low that really create latitude envy lol.  Color perception is odd isn t it?   A (fantastic) planetary like 3242 has this queer query green about it at 60x with the C6.  In a field of stars this odd green fuzzy patch rather small.   Here low power really allowed the color to sing.  Then look at that bright billowy wedge of light in M42 as the backdrop to the trapezium.  With t h e 8 the color in the wedge wavers in beautifully at 150x , even 200x. At 70x it's beautiful but more silvery appearing.  Low power for me doesnt do the wedges colorant favors.  At least for me, color needs seem to vary object to object when color is available to be perceived.

Excellent sketch and very nice read on that report.

Thank you, Frank. I can get verbose on the report side of it, but I got into the habit of relating the experience instead of the more abbreviated object descriptions we've read.

I saw this nebula tonight at 200-300x, 10" Dob, with filter. A small faint glow around a mag12 star, seems to show a double fan shape. I can see hints of its X shape. The nebula seems faint but not too much.