In praise of tiny binocs.

When observing in daylight you only have small pupils, so big binoculars are not needed usually. The smaller exit pupil of the small binoculars can sharpen the view, if you have some astigmatism.  A lesson I learnt observing the sun with a smaller refractor, compared to my much larger newt. At low magnification the newt was giving a large exit pupil, exaggerating my astigmatism.

One of the great delights of compact binoculars, and monoculars for that matter ,meaning the ones that will fit into a small pocket are that "She who sees all" cannot detect the beautiful little bug##s, even if you have spent a lot of money on one of the higher end models,D

I love my little Kowa Genesis 8x22 (true field 7.5°). These pocket binoculars are very comfortable to use (especially with the perfectly fitting additional winged eyecups I bought from Teleskop-Service a few years ago). The view is sharp across the entire 60° field.

Just got this Sans & Streiffe opera glass on the 'bay.  I liked it because it's the first opera glass I've come across that actually looks like a larger, "standard" binocular.  Low power, very wide true field though the AFOV is quite narrow.  Looking forward to trying them out on the larger objects from a dark sky location.  NGC 7000 should be amazing in them.  I can squeeze-in half of Orion.

I have better small binos, to be sure, but these have a "cute" factor going for them.  I'm expecting something similar to the tiny "KGB" field glasses I had some 20 years ago.

I need to clean and lube them, have only had a chance to try them out during daylight so-far.  Huge exit pupil that I can't fully take advantage of, but that can't be helped.  I want to compare them to my S&S 998, though the bigger bino will probably blow them out of the water, FOV included.

If all else fails, I can hang them from my rear-view mirror. 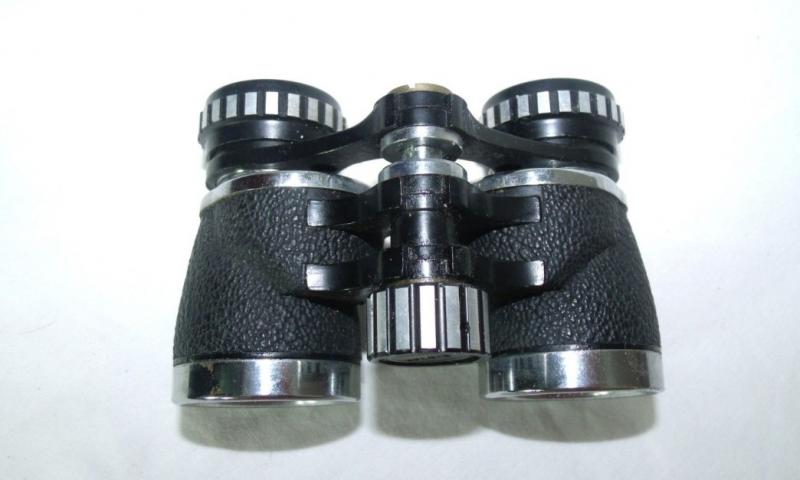 I too love the tiny guys. One of my problems is I'm cheap, so I'm relegated to finding high quality optics at thrift stores and yard sales.

I came across these little 8x22 Minoltas, 8.2 deg FoV, pretty decent image, in perfect collimation, and for all of $5.


I haven't been able to find much about them aside from coming up on auction sites, and listing for between $15 and $150. Have tried to find out what the MSRP was, but have come up empty. They are absolutely perfect for chucking in a backpack when I'm about to head out hiking.

I think they're from the 80s/90s, and made in Japan, which I'm not sure if it's a good thing or not since as I understand it, Japan was the China of 25+ years ago.

I have a pair of these that I bought back in the mid '90s for birding on hikes and while travelling. I still have them and came here to see if anyone else was still using them. I love them for compact binocs, and I use them for orienting around the night sky sometimes, as well as for grabbing off a side table when an interesting bird or jack rabbit crosses my view. If you found a pair for $5, I'm envious. I think I paid close to $200 for mine back then at a birding boutique.

I have very close-set eyes, so the minimum interpulillary distance of many binoculars is too wide for me.  Back in July, I bought a pair of Zeiss Victory 8x25s; they can adjust down to as little as 35mm.  They are perfect for me:  light, bright, very sharp, and they fit my eyes.  I'm looking forward to many years of happy traveling with them!

The Bushnell Custom Compacts were probably the classic small binocular. I still have one.

I have somewhere, two of the old Pentax compact porro prisms and they too are pretty good. I purchased a new Pentax 8X21 which is not very good. In fact I am suspicious they are not even Pentax. They came in a Pentax box but no where on the binocular is the name Pentax. Just the initialsTS. They are surprisingly well made for such mediocre optics.

I have two Fujifilms, not Fuji but Fujifilm. One is an 8X25 roof prism which claims to have phase correction. Also made in China. Optics are OK but not better than that.

The last one is a jewel. A Fujifilm Glimpz 5X21. It was $19.00. I liked it so well that I gave it to my Granddaughter and ordered another for me. They are porro prism and very light. Optics are good in fact much better than one would expect for $19. Probably equal to ones selling for $70 or so. No where on them is country of manufacture, probably China.

Also have a couple of $8-10 roofs which are actually usable but that is about all. Why use them when there are so many better ones for not much more.

While looking for my old Pentax Papilion compacts I came across an interesting binocular.

It is even smaller that the 5X21 Fujifilm.

It is a Tasco porro prism cool FX 8x21. They have Bak-4 prisms and sold for $10. I think they were once in the $35 range but when Tasco was going out of business they cleared a lot of models out.

The best thing is they aren't bad optically. Not great of course but not bad and they really are tiny.

Regarding your compact Celestron from the yard sale, was it possibly this one?

That seemed to be one of those "flash in the pan" models.

Here for a second, then gone.

Very similar in dimensions, vastly more robust in construction, and..... far inferior optically to the Celestron!

Curiosity got me going here. 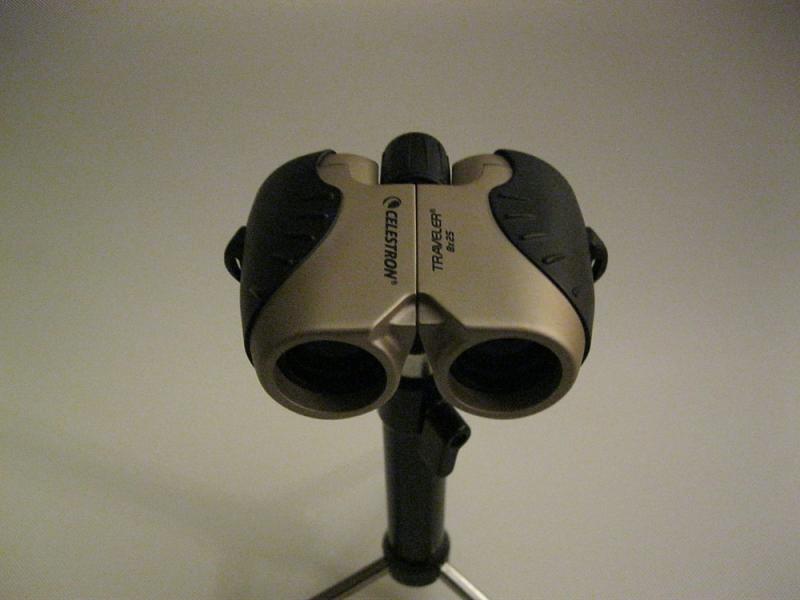 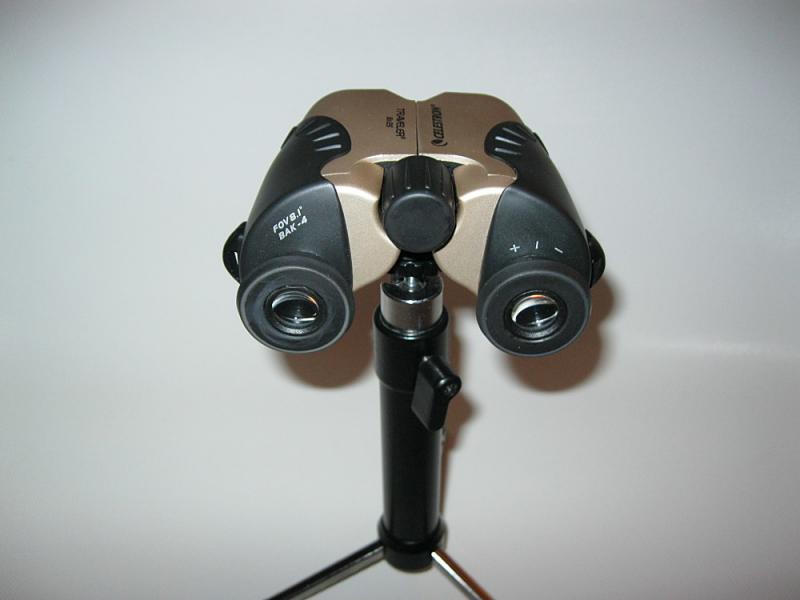 I love my little Kowa Genesis 8x22 (true field 7.5°). These pocket binoculars are very comfortable to use (especially with the perfectly fitting additional winged eyecups I bought from Teleskop-Service a few years ago). The view is sharp across the entire 60° field.

Regarding your compact Celestron from the yard sale, was it possibly this one?

That seemed to be one of those "flash in the pan" models.

Here for a second, then gone.

Very similar in dimensions, vastly more robust in construction, and..... far inferior optically to the Celestron!

Curiosity got me going here.

With the passing of time so passes much of my memory.....

That's surely the one.

But you can't just call it YELLOW... ish.

You have to be sophisticated and call it a Champagne color!

By the way, I fear that my own "grey matter" may be solidifying more than I care to admit.

That's surely the one.

But you can't just call it YELLOW... ish.

You have to be sophisticated and call it a Champagne color!

I'm not trying to mess with your "grey matter".

The one that I had, years ago, was actually a bright yellow color.

The link that I posted kinda? reminded me of the one that I had.

I shoulda kept it.

Here's my most recent tiny binocular purchase. I have two of these.

To my eyes very good to excellent optics.

I recently bought a pair of 6.5x21 Papilio's, and I adore them. But I like them much more for daytime use than for astronomy. During the day, their immense convenience, close-focus capability, long eye relief, and forgiving eye placement make them a joy to use. And very often during the day I want just a little magnification; for many purposes 6.5X will serve just as well as 10X.

At night -- what can I say, they're a little underwhelming. I'd much rather use 7x35s or something bigger. Having said that, they're way better than my 6x15 monocular -- and I've used even that tiny instrument plenty for astronomy.

I'm not trying to mess with your "grey matter".

The one that I had, years ago, was actually a bright yellow color.

The link that I posted kinda? reminded me of the one that I had.

Here's a proper yellow compact binocular, Stan. It should take you back in a couple of ways.

Leica has alway$ been out of my reach...

Mine are Pentax 8x21 UCF reverse porros. These were $140 MSRP (list price) back in the 80's. They are not  the same as the 8x21 Pentax makes today which are cheaper in cost and in performance. Mine weigh 7.5 ounces.

I think these are the UCFs the OP is referring to: 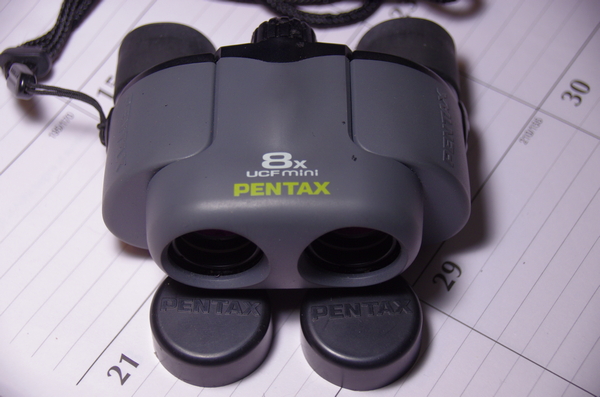 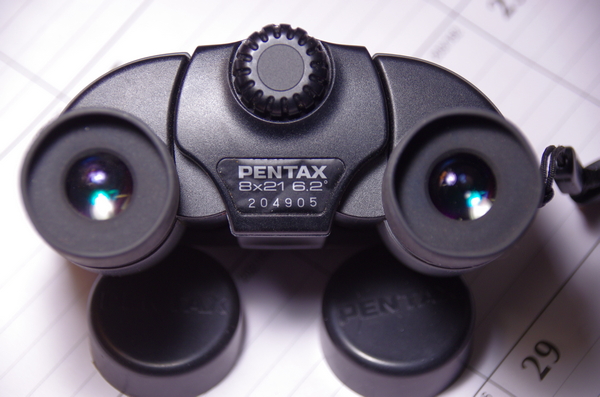 Bought them about 20 years ago, can't remember the price, and I carry them in a gear bag for work so they are always handy for a quick daytime look.

They say "Assembled in China" on the sticker.

Of course, these 8x20s were not made in China, and the views they provide are, indeed, superior to the UCFs. 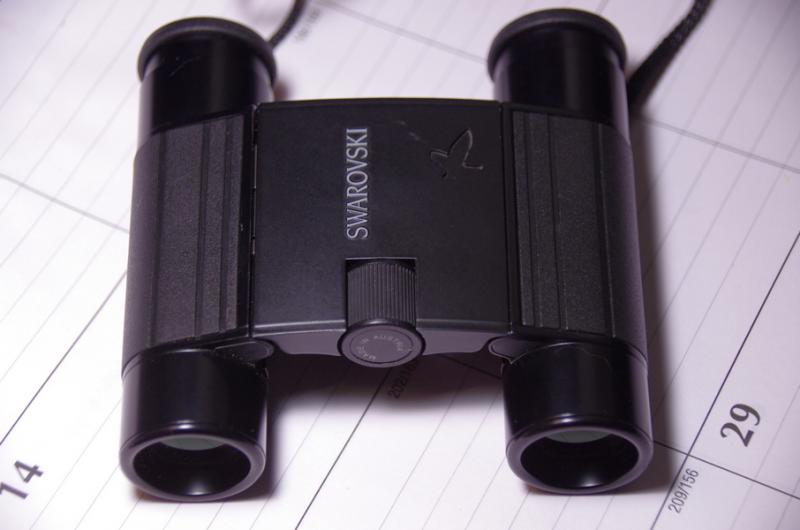 I've had them nearly the same length of time as the Pentax model.

I carry them in my DSLR bag for scouting purposes.

I have the Swarovski 8x32 el but would not consider them compact. My wife has their 8x30 cl. Now that is compact. Just the single hinge and short. I like to use them with just a wrist strap and no caps, carried in their bag.

Ounce for ounce I have found anything to beat these for quality and convenience.

I just ordered several Pentax 8X21 UCF R's from a distributor clearancing them out for 31 bucks.

These are intended for binocular eager children from 7-9 years old.

These would be used under guidance. (But not by me).

All the specs and reviews showed favorably.

Can you add any specifics regarding their inferiority as opposed to earlier models?

Being real. I'm under no illusions here. (And certainly, neither are the intended recipients).

Nakedgun, this Pentax is pretty nice. It looks like AGM binoculars ( this one: https://www.agmgloba...view/binoculars ), and even by specifications they look pretty similar. AGM 8x36B is a great model, was testing it for two weeks before giving it as a present to my uncle.

I just ordered several Pentax 8X21 UCF R's from a distributor clearancing them out for 31 bucks.

Would you be interested in sharing the clearance link?

I just ordered a Nikon Mikro 5x15, it looks like it will fit in the palm of my hand ? D.

I had one such similar miniature binocular years ago.

It was so tiny that I did not get any practical use out of it.