Your pal, Pallas...and Iris, too

I am posting this as a heads up.  The large asteroid 2 Pallas and asteroid 7 Iris are at opposition on April 6 and April 5th respectively.  Pallas has already peaked in brightness at 7.9 mag as of March 20, while Iris will peak at 9.4 magnitude.  Pallas won't dim significantly over the coming weeks, but Iris will begin dimming more rapidly at the end of April.  Pallas will reach an apparent diameter in the 0.4" range.  Stellarium's number for Iris' apparent diameter looks high so I am not posting it until I check it.

I caught 7 Iris a couple of years ago thanks to a heads up like this one when it happened to be passing close to M80.  At that time it was magnitude 9.1. 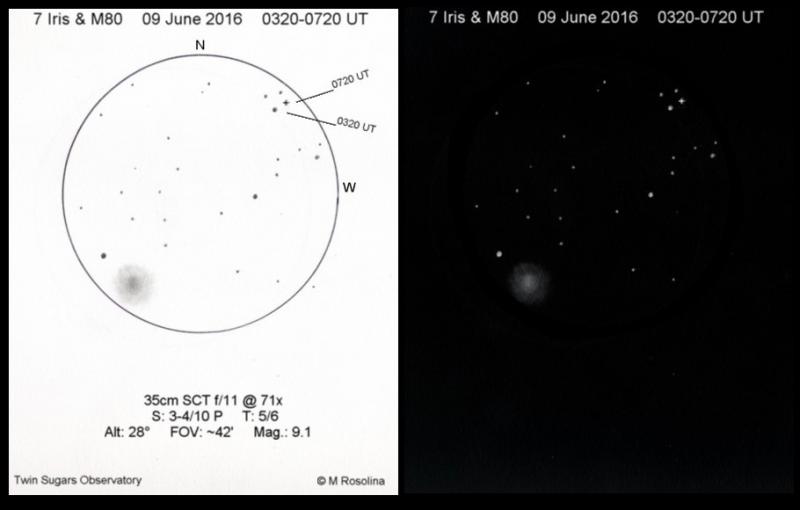 I was able to catch them both last night, through sucker holes between clouds that were not supposed to be there.  Even had the novelty of ice pellets raining down on me while observing...those weren't supposed to be there either.  It is a pretty bad night when only three targeted objects are logged and two are asteroids.  I should have followed my gut about the weather based on what I could see towards the mountains all day, and a thin band of cloud offshore in satellite view in the afternoon that looked like it might arrive that night.  My gut forecast was spot on; the models missed by a mile.

I observed Pallas first, identifying it through my 2.3x binos in averted vision through/between thin cloud. It was noticeably dimmer than the 7.1 mag star approximately to the north of it.  Switching to the 20" it appeared to have a yellow hue at 278x.  I put the seeing as somewhere between 2 and 3/10 Pickering for the 20", poor at about 2 arc seconds, so I couldn't really separate the airy disk from the diffraction rings of stars.  I did observe some subtle but consistent differences though vs. 8th mag comparison stars.  I used 357x at times which indicated Pallas was borderline non-stellar, primarily because it appeared more stable than the shattered diffraction pattern of the 8th mag stars, and there was a smoothing effect to the brighter central portion of the pattern that was absent for stars.   My calculations show a diameter of ~0.39 arc seconds, so I would need some decent seeing to resolve it.

I did not try the 2.3x binos for Iris.  It took me some time to identify the correct pattern in my 80mm finder at 16.7x.  Switching to the 20" I found it more difficult to distinguish Iris as being non-stellar than Pallas was.  The effect was more suspected than confirmed.  Iris appeared somewhat more stable than 9th mag stars, but the difference was not large and not really sufficient to identify it as an asteroid vs. distant star.  Being lower in the sky I only used 278x for it.  I had the impression that Iris appeared slightly wider than similar magnitude stars, but this was only suspected.  Doing some calculations now at home, I find the apparent diameter should be about 0.17 arc seconds.  [Stellarium is predicting 0.4" and is way off for some reason...not sure why as I cannot find the elements for Iris in the .ini files, I don't know where it is pulling its data from.]

I had a look at these last night, without the ice pellets!

At 387x in the 32” Pallas was a non-stellar disc. It appeared bright, around magnitude 8. Sky Safari 6 with the extended star database made orientating the star field and locating Pallas easy. Plus the fact everything else was stellar and Pallas appeared as a disc.

Iris looked stellar to me again at 387x. Not quite as bright as Pallas, but still easy to split from the fainter star field.

I observed Pallas in December 2017 when it was swinging through Fornax. I was in Baja California at the time where the climate is Fornax-friendly. This was my first ever sighting of this wee asteroid. Saw it with a TV85. It took several checks of the map to confirm (and I had to stop and convince hotel security that I was really looking at stars and not launching grenades). There was a lot of chatter on the two way radios that night.

When I see a number that doesn't look right, it usually pays to check it out.  The school of hard knocks has taught me that when I don't, I often get burned.

Yesterday (april 4th) was my first look at Pallas. Using stars nearby, I estimated it's magnitude at about 8,5 more or less 0,03.

Can someone confirm my observation? Estimating magnitudes is something I'm just learning to do.

Thanks for the update, sorry you couldn't get obliging weather, or seeing rather.  Iris I can't even remotely consider as it's in Corvus and that's just too way low for me to get anything like a decent Pickering number.  Pallas though, maybe - if I stay up late enough.

Looking right now at 10:00 EST. Is Pallas the starlike object very close to Muphrid? I was looking about 4 days ago and didn't see a star that close I don't think.

Wait...scratch the above question. Is Pallas the 2nd closest object to Muphrid? I didnt notice the dimmer object at 12x in the 66mm at first. Bumping up the power brought a dimmer closer object into view. I drew a picture at 100x, hopefully tomorrow it's clear enough to look again.

I drew a picture at 100x, hopefully tomorrow it's clear enough to look again.

Same here. It's the first time I'm asteroid hunting and it helped me to learn a few tricks. It's the fist time that I sketch. Having lot of fun exploring in detail a small part of the sky as oppose to the usual slewing all over the place looking for bunches of DSO.

Here's the section on asteroids from the April 2019 Celestial Calendar.

As it heads northwestward through Boötes this month, the main belt asteroid 2 Pallas shines at eighth magnitude.   The second asteroid to be discovered reaches opposition for North American observers on the night of April 9th.  On April 10th, 2 Pallas passes just two arc minutes east of the third-magnitude star Muphrid (Eta Boötis) and approximately five degrees southwest of the first-magnitude star Arcturus (Alpha Boötis).  A finder chart can be found on page 48 of the April 2019 issue of Sky & Telescope.  Asteroid 7 Iris is visible as a ninth-magnitude object as it travels northwestward through northeastern Corvus.  This main belt asteroid, which is less than half the size of 2 Pallas, reaches opposition on April 5th.  A finder chart appears on page 50 of the April 2019 issue of Sky & Telescope.  Other asteroids brighter than magnitude +11.0 reaching opposition this month include 405 Thia (magnitude +10.5) on April 20th in Hydra and 44 Nysa (magnitude +9.9) on April 25th in Virgo.  Click on http://www.asteroido.../2019_04_si.htm for information on asteroid occultations taking place this month.  See https://www.curtrenz.../asteroids.html for additional current information on a number of asteroids.

Astronomy also has opposition occurring at 9:00 p.m. on April 9th on page 39.  I've seen the April 6th date at some online sites and also in Sky & Telescope.  So which date is correct?

Same here. It's the first time I'm asteroid hunting and it helped me to learn a few tricks. It's the fist time that I sketch. Having lot of fun exploring in detail a small part of the sky as oppose to the usual slewing all over the place looking for bunches of DSO.

Due to the weather, Pallas will be long gone from that section I was looking at before a revisit. But, I'm going to revisit that spot anyway and compare the drawing.

Due to the weather, Pallas will be long gone from that section I was looking at before a revisit. But, I'm going to revisit that spot anyway and compare the drawing.

About a week ago I revisited a section where I thought I previously saw Pallas. Everything was the same. I had mistaken a star for Pallas.

Then went on and found what I thought was Pallas. The next night, the sky cleared for a few hours. I went back and in an instant realized that what I then thought was Pallas was missing! The drawing hepled to confirm my observation, this time without a doubt. I then noded the scope a few arc minutes over and there it was, a foreign objetcs in the star field according to the map.

Those observations thought me a lot about searching, sketching and even the view in my scope (Dob).

Last time I observed the asteroid was satruday night. My estimation was at  between 8 and 9 magnitude.

Astronomy also has opposition occurring at 9:00 p.m. on April 9th on page 39.  I've seen the April 6th date at some online sites and also in Sky & Telescope.  So which date is correct?

I am not sure.  I haven't done the full calculations myself and am not sure of the precise definition of opposition in this case.  "In-the-sky.org" site says that the opposition is calculated based on "NASA's DE405 planetary ephemeris."  One would assume they are using a formal definition for opposition to arrive at April 6, 2019 opposition for Pallas.  My understanding is that opposition should be when Pallas is ~180 degrees relative to the Sun as referenced to Earth on the ecliptic plane.

I don't know if this is based on some specific date oriented (J2000) position of the plane relative to Earth accounting for precession, present, or not.  And I don't how much impact this would have on specific dates.  While checking some of Stellarium's positional graphs and ephemeris I noticed that Pallas max elongation is April 6.  This also coincides with its minimum phase angle, so I would expect it to be accurate.  I don't know what the basis would be for using an April 9 or 10 date.  It might be some quirk of the orbital inclination of Pallas relative to the Earth and Sun and resulting transition to retrograde--which is given as a requirement for opposition in some definitions.