Ever owned a Classic Cassegrain?

52 replies to this topic

Never had one but I always wanted to try one. I think they are quite cool. I think a 6” would be perf!

Here is my 8" f16 Classic Cass. The mirrors were made in the Adler Mirror Shop in the 70's and the body is a carved up Dynamax.

I didn't even know that smaller Cassegrains were available.

Yeah, one of the coolest small models I had was a vintage (1980s?)  Kenko 125C, a corrected Dall-Kirkham F10 Cassegrain, that used a lens assembly in the primary mirror baffle.  It was trickier to collimate than my Tinsley 6" Cass, but easier than my Vixen VMC200L.  (These seem to show up for sale in Italy, along with the smaller 100C.)

It came with the KES EQ mount, which is between a Vixen Polaris & Super Polaris for size & weight -- very nice!  Apparently, Kenko sold a later KES version with dual axis drives, and IIRC, go-to capability.

Is the Dynamax part the one I sold you?

Just be aware that many of classic ( as in age not necessarily optical type  )  Cassegrains did not come with the correct baffling ie Caves. That greatly reduces contrast.

Also unlike a Newtonian the spacing between the secondary and the primary is critical. If not spaced correctly you will have  spherical aberration. If the design is a classic or RC type it is also very critical that the optical axis of the secondary and that of the  primary be perfectly aligned as well since both these use aspheric surfaces.If not you will get on axis coma and astigmatism that you won't be able to collimate out.

So it much more complicated in aligning them then a typical Newtonian and in my experience this why I seen so many of them that give poor performance.

I've somehow managed to wind up with 2 of these from at least 3 different sources.  The first one, the OTA is from 1965.  The owner said that the mount had been stolen out of his front yard.  I ended up with a mount from the 70s for it.  I bought an aluminum pier for it (a steel one would have been about 3x the price, believe it or not!).  I have all the bits for the drive corrector as well, just like you have here, that came with another purchase from an ebay auction.  I'm hoping to put it together very similarly to the configuration you show here.

The other is one I found at the Golden West College swap meet in Huntington Beach a few years back.  The seller is one of those who buys up contents of unpaid storage units.  He brought the mount and pier one weekend, then when I told him what to look for, subsequently brought the OTA (and a few other OTAs) and the legs at other weekends.  It's almost complete now, and will be restored to original when I can get to it!

I'm hoping, but not expecting, that at least one of these will have superb optics, though Cave DKs were infamous for being mediocre.  If mine are, I'll refigure them! 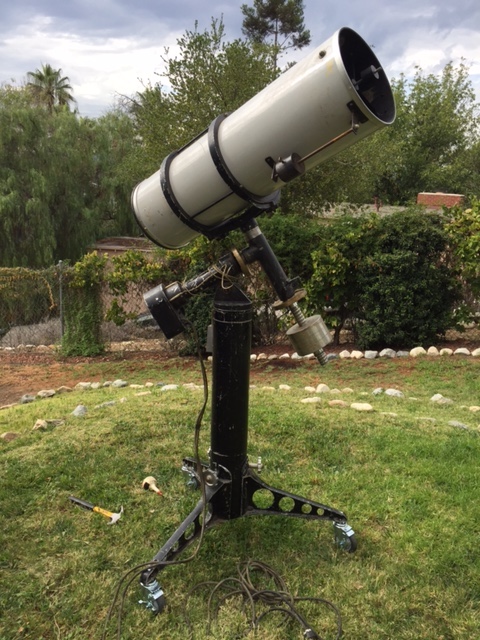 And here's the current status of the 1965 on the 70s mount and aluminum pier: 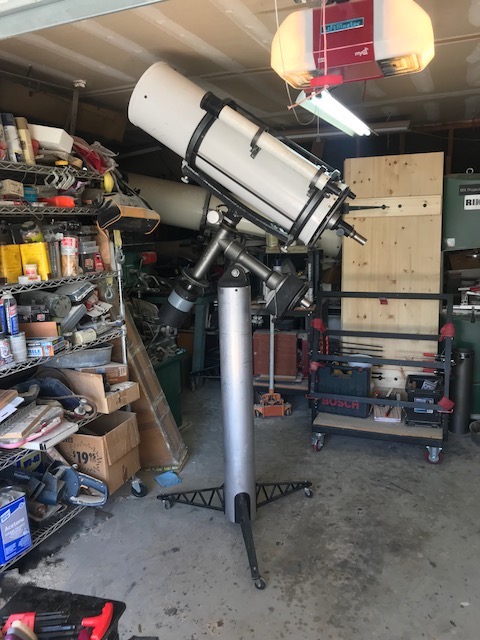 I should note that the older one, from about 1963 (has the same knob castings as the 8" I sold to Kent a couple years ago but no date anywhere), also has an aluminum pier, but it's original Cave.  The mount parts are currently flaking black (no primer), but I plan to use the Zolatone I had mixed up for Kent's 8" to repaint it (after priming!).  I'm thinking of keeping that one, of the two, because it just looks cool with the brass setting circles and is otherwise all original.  It had a tangent arm slow motion, whereas the later one has a 360 degree dec slow motion that would be easier to goto, if I were so inclined.  But I'm probably not!

I owned this OTI Cass for a number of years.  It is one of one, model number 165001, S/N INCASS65-1 built in 1965.   An absolutely unique OTI OTA originally built for MIT as part of a laser guided automatic aimpoint selection and maintenance (AuASAM) system. It is a classic cassegrain design, and came with all design and purchase correspondence between OTI and MIT. The scope has optics built to MIT specs by Cumberland, (of course the maker of Questar's optics). The primary mirror is fixed, but the backplate is adjustable, to aid in achieving focus with the 1.25" JMI focuser for visual (I added this and replaced the original bellows focuser and video C-like adapter). The tube is made of Invar, a unique iron-nickle alloy with a very low coefficent of thermal expansion. It is a thick walled tube and puts the OTA at roughly 60 pounds. Visually the optics are poor, but were recoated by the previous owner, so don't think they came that way originally.   One of my more memorable OTI collector items. 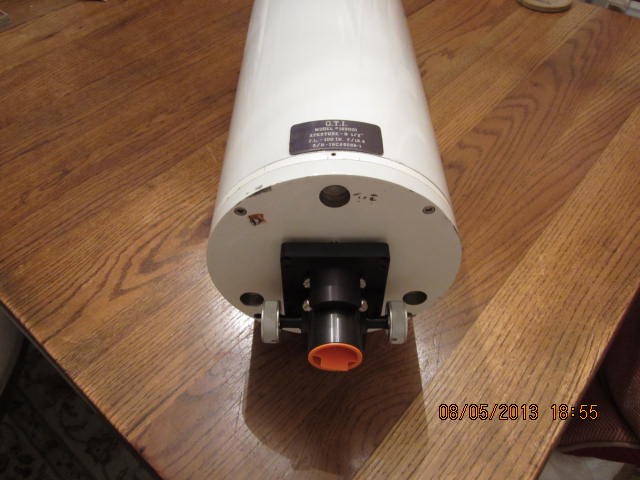 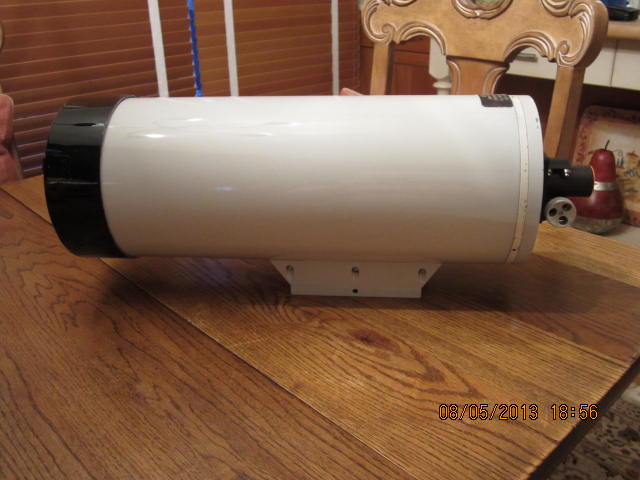 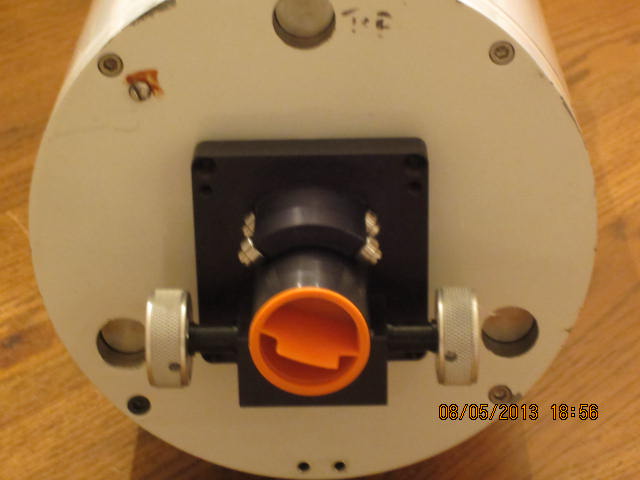 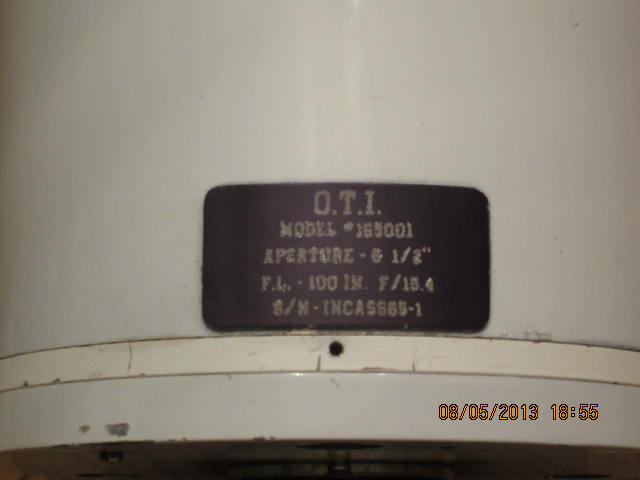 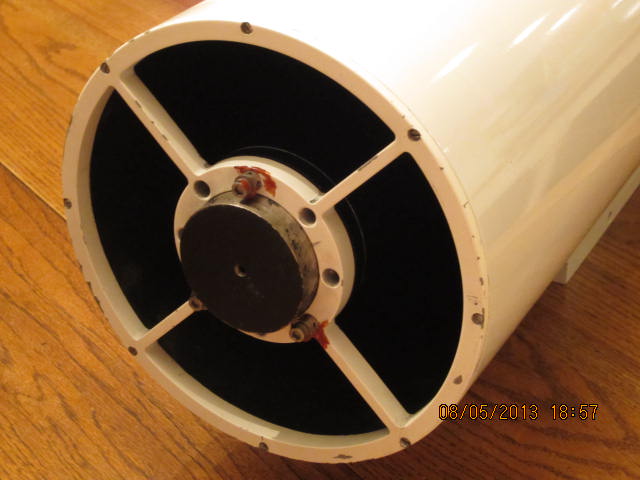 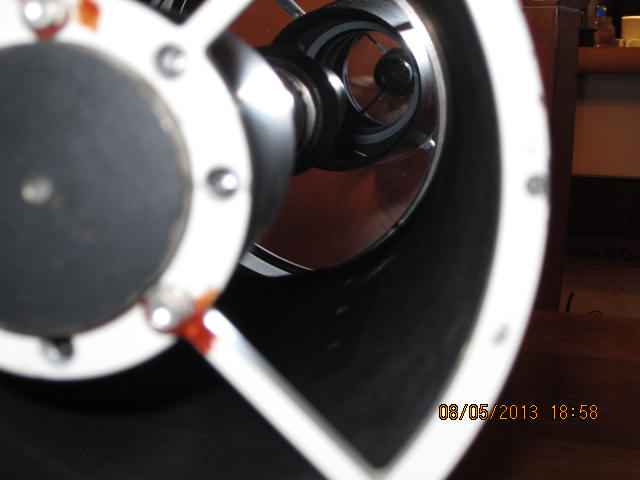 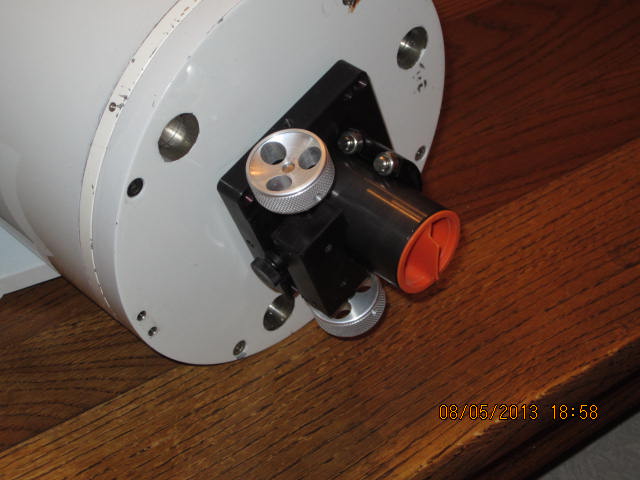 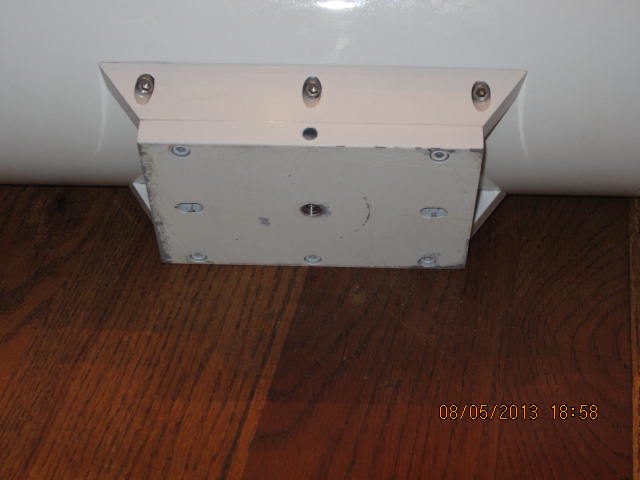 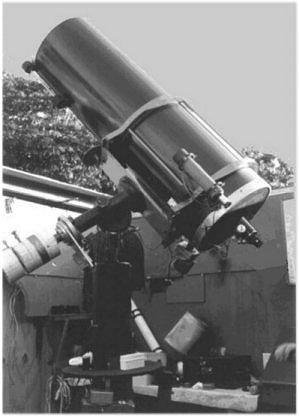 If the design is a classic or RC type it is also very critical that the optical axis of the secondary and that of the  primary be perfectly aligned as well since both these use aspheric surfaces.If not you will get on axis coma and astigmatism that you won't be able to collimate out.

The issue specifically is "coaxial" (optical centers coincide) and "co-planar" (the elements are not tilted WRT to each other). A laser pointer might align physical centers (you still have to assure they correspond to optical centers), but then you have to remove the tilt (by trial and error), and then return to optical center as well (because it may move when you change the tilt).

On an RC, it's especially delicate because the "2D" effects on the image plane, which is how it gets it's wide field. Took me many hours to learn this. And many more to understand why this had to be the case, with how an RC works.

On a parabolic/hyperbolic primary secondary, less of a problem with tilt and more with optical centers, because the SA is  largely the same within the narrow field of correction at a specific separation. Because the hyperbola of correction at that distance matches the difference "locally" around the axis, unlike with the RC case, where they intentionally diverge to give a wider field (offsetting aberrations).

On an ellipsoid/sphere DK (or, for that matter sphere/hyperboloid SCT), because the sphere is uniform in adjacency (e.g. not aspheric definition), only one element's tilt matters, and assuming optical and mechanical centers are the same, it's perpendicular and thus "no tilt". (The "relay" or "modified" DK can mess this up if someone has an offset or tilted lens (or lenses) - those I've seen try to use cheap bino/finder objectives which wreck the correctly figured primary/secondary (after going through all that trouble).

And while I'm at it,  there are "mirror lens" that have "flat" secondaries (which like newts don't matter on tilt just centering), but the lens elements in the baffle tube are extremely sensitive to tilt/centering WRT light cone - sometimes you find defects in the assembly of them (or sloppy elements). So obsessing over the "secondary" placement entirely misses the issue.

A pic would be nice, please

I'd have to scrounge, it was all never set up for the typical nice use picture.  The OTA and mount were separate deals when I bought them. I still have the 12.5" O.C OTA now, so basically busted up the O.C set up. This was never posted and done outside websites. The buyer drove interstate.  The OTA is about 64 pounds as I recall, and buyer had LaRgE refractor at full F15 was 6" or bigger also for the mount (he didn't bring it).  This was a day deal and he's doing the adaptions. I considered doubts about splitting up the OC pack but thinning and you have to admit this was a thinning. The offer treated me right.
As a result I now have two fairly matched 12.5"  F~6 vintage fiberglass white tube type newts.  I may Swayze test both mirrors side by side and go from there, no binos.

I didn't own one but used to observe with Yale's 20" classical cassegrain in the 40" dome ( The 40" was moved to Cerro Telolo). 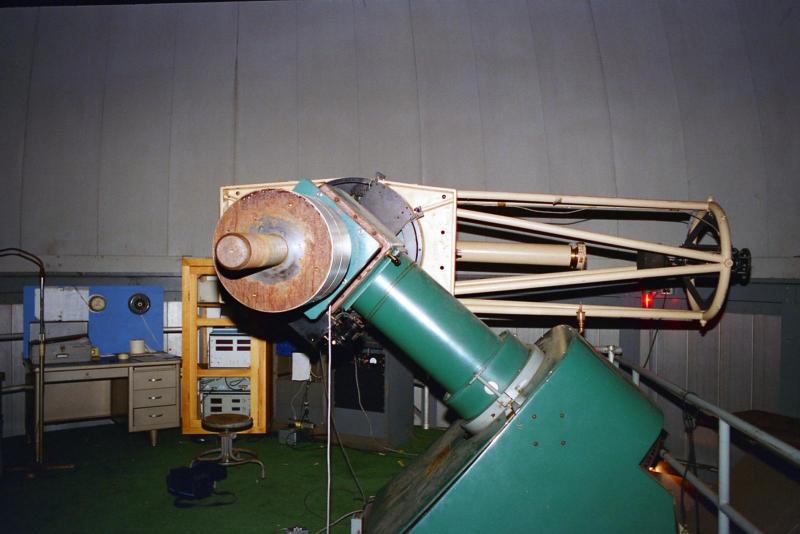 Also that floor is hydraulic and when the 40" was in service there was also a Coude' focus. Yale mainly used the 20" to test new equipment to be sent to Chile to be used on the 40" (one meter). My friend Dave J. was the observatory caretaker as well as the  head machinist at the Yale machine shop.

Here's a link to the one meter scope at CITO: 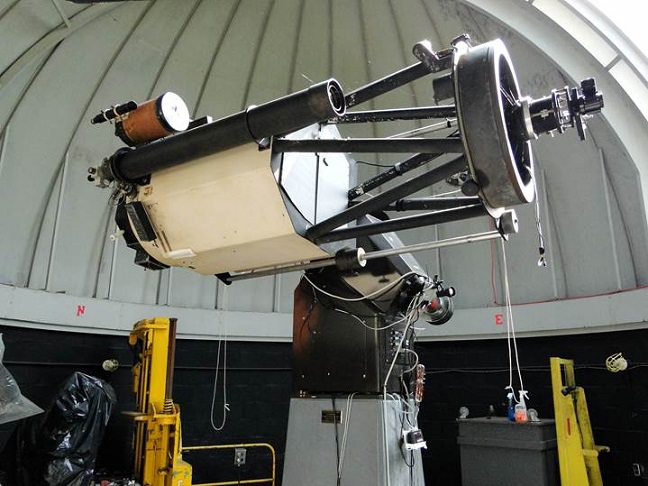 My driveway scope is an 8" f/20 classical Cassegrain.

[EDIT April 10, 2019] I thought I had a photo ready, yesterday, but I didn't.  So here is a photo of my driveway scope on my new-to-me GM-8 mount.  Unfortunately, in this photo it's only ready to go back into its cabinet.  We have clouds, AGAIN, on the Third Coast. 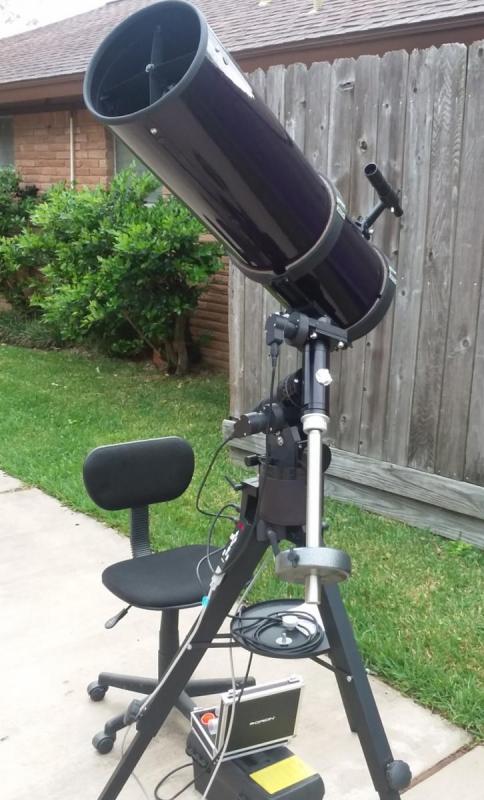 My main scope (in my observatory) is a 14" f/15 classical Cassegain.

I also have an antique Parks Hybrid, which can be configured as either a 10" f/4 Newtonian or f/15 classical Cassegrain, depending on which secondary mirror is installed.

Dave, Is that a CCD Camera and filter wheel where the secondary goes?

Never had one but I always wanted to try one. I think they are quite cool. I think a 6” would be perf!

You should resubmit your order to Astro-Tech, then.

I didn't even know that smaller Cassegrains were available. Thought they were all ATM projects (apart from the compact ones such as SCT, Mak, etc.)

For those that are curious, here's a thread that might help you scratch your itch.  Some of these scope may have even landed in the US...

Where is the cabinet where the punch cards are stored?

That is a big gun. Not gonna fit in the Vette.

Where is the cabinet where the punch cards are stored?

Probably there somewhere, the Boler and Chivens 40" was installed in 1965!


Also tagged with one or more of these keywords: cassegrain, classic