M108 is a barred spiral galaxy with loosly wound arms, inclined 75* to the line of sight. It was first documented by Mechain in February 1791, then observed by Messier a month later. In 1789, it was independently discovered by William Herschel, who added it to his catalog as HV.46. The galaxy has the maximum apparent diameter of 9 arcmin, and apparent magnitude of 10.7. Its redshift of z = 0.002328 corresponds to the recession velocity of 698 km/sec. It is estimated to lie at the distance of 45.9 million ly, and to contain about 400 billion stars, 290 globular clusters, and a supermassive black hole of 24 million solar masses in the center. The galaxy is approximately of the same size as the Milky Way. It has a relatively small and flat core, and prominent dust lanes in the disk, with few Hii regions. It is surrounded by an Hi supershell - a cloud of neutral atomic hydrogen, which extends up to 10,000 ly around the galaxy. M108 is an isolated member of the Ursa Major galaxy cluster, which is itself a member of the Virgo supercluster.

The attached image was taken with the TSAPO100Q astrograph, IEQ30pro mount, unmodified Canon 600D camera, Astronomik CLS-CCD filter, and Orion 60mm f4 SSAGpro autoguider. It is an 11% crop of a stack of 25 x 120 second exposures at ISO 1600, processed with 3x drizzle and 30 bias and dark frames. Software used was PHD2, DSS, XnView, StarTools, and Neat Image. Limiting magnitude on the original image is 18.5. 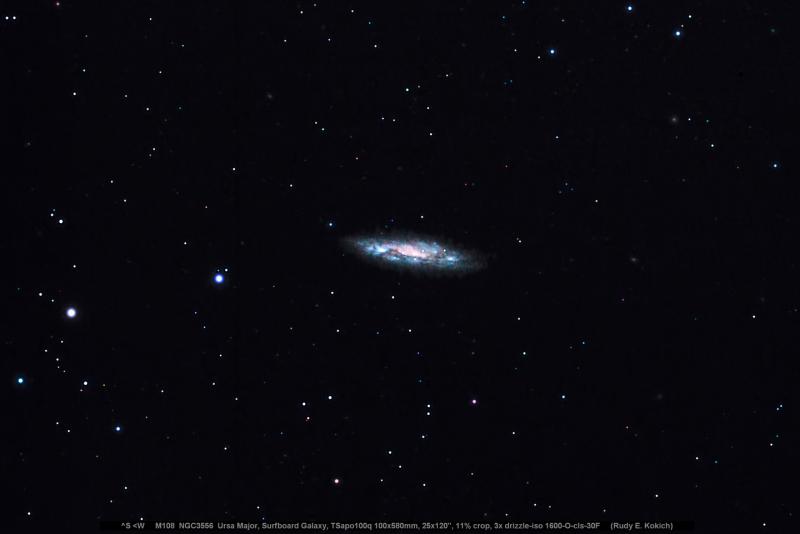 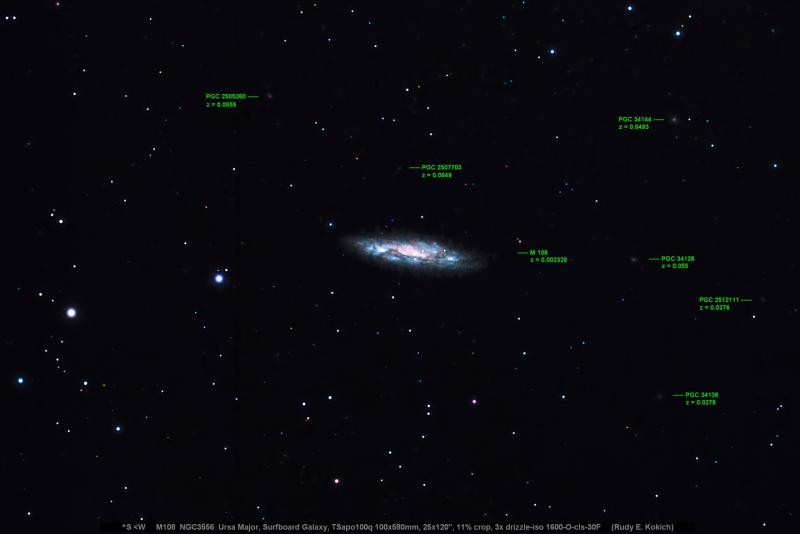 Very nice picture!  When you say 11% crop, is  that 11% of the area of the full picture? Just curious about this number.

I love the colors.   Gives me hope with my DSLR

Gipht, the crop was 1/3 of each frame side, or 1/9 of the area, or about 11% of the area. This object is really way too small for my telescope's image scale (fl 580mm), but it still came out fairly well compared to many images on the net, and even compared to the DSS2 survey taken with the 48'' Palomar astrograph:

Peter, the colors are in part due to the Astronomik cls-ccd filter which passes red and blue-green bands only - good for galaxy cores and spiral arms. In processing, green color bias usualy has to be decreased and blue bias increased.