Does anyone know if the focal reducer for this scope has threads inside to accept a 2" mounted filter? Thanks.

Does anyone know if the focal reducer for this scope has threads inside to accept a 2" mounted filter? Thanks.

Yes the filter can be threaded inside the reducer; the rear of the reducer unscrews from the optic to allow mounting of the ilter.

So my Mark II arrived today and I have been setting it up. Got the back focus sorted for the Baader UFC connected to my Nikon Z6. I'll report back on IQ when Sky's clear. But so far I cannot see any vignetting on my full frame Z6.

Meanwhile - on the dovetail, focuser and balance. The dovetail is really far forward and once a camera is attached at the right distance it's really unbalanced. I kinda want to put in a bigger dovetail but that would foul the focuser unless I either rotate the focuser to the top (works) or put in some spacers. Unless I put in a rather longer dovetail I don't see how I am every going to balance this around the DEC axis. Has anybody got a good solution? Ideally a specific longer dovetail and spacers that have the right holes? Or have people done some other trick to balance? this scope. The pic shows how far I've got moving the focuser around, so I can clearly do that, but it is not close to being balanced even with the dovetail well forward.

Starting to work on the  Mark 2. Sky is terrible and so far all I could do was take some flats. This is straight out of camera apart from a desaturation in LR and being saved as a JPG. Full frame Z6 using a flat field generator and the Baader UFC setup. Possibly the most tedious flat ever. I couldn't see much at all until I whacked up the contrast. Sensor illumination is not a problem. I looked around and discovered that Testar in Australia had measured the corners on the Mark 1 at -3.5%.

More progress with the Mark 2 triplet...

An ADM 7in universal V(ixen) series dovetail showed up and I have attached that, and as others have found a longer dovetail makes the rig balance easily. For now I have moved the focuser to the top but I might put some spacers in to restore it to the bottom. I'm right handed so having the fine-tuning knob on the right might help.

With the sky at 90% cloud I thought I'd kick off the first part of my slightly crazy experiment to try the large Riccardi flattener and reducer on it. I have these for an APM 107/700 so was curious to see how far I could get.

If you take off the standard reducer there is an M63 female thread at the end of the OTA. From M63 you can go to M68 and then to M82 which allows either the reducer or the flattener to be attached. So that works. With the flattener, shown in the picture, it easily illuminates full frame, and with most of my spacers removed I can focus to infinity in the middle with the rig as shown, and it is sharp to maybe 3/4 the width of a crop sensor with the gear shown. That's after an hour of fiddling with spacing and taking random pictures of distant trees. So I have not come close to achieving flatness across full frame, but after a quick play I reckon I'd be fine with something like the ASI533 with some more work on spacing. I'll fiddle with this some more when I get time. I just emailed Riccardi to ask him what sort of spacing to try. It's going to be tight - not sure if a DSLR will work as I'm getting ever closer to my mirrorless flange. I'll also try it without any flattener it to see if being a triplet makes it more usable without any correction.

Ive been following your last few posts on this, have you got any test images you can share yet.

i see you didnt buy the matched redcuer, ive had my finger hovering over the buy button on this scope but cant decide wetherr to get it with the matched redcuer or Just get the scope and try with my existing TS RED279 reducer. Or just go all out and get a Redcat51, though not having a proper focuser puts me off the redcat.

I did buy the matched reducer and it works great. The weather has been atrocious and I’ve only been photographing distant trees while checking the Backfocus spacing on my custom Baader connection to my Z6. I think I got that sorted yesterday and just need a decent night. Sharpstar confirmed the flattener Backfocus data was unchanged in working with the Mark 2 so I am using 110mm from the 63mm thread on the reducer, so targeting 94mm plus 1/3 filter thickness to the flange of my Z6 that has a flange sensor distance of 16mm.

I’ve had less luck with the experiment with the Riccardi flattener. I think it is fine with a much smaller sensor, but I have yet to get a flat field to DX edges. I emailed Riccardi and he was kind enough to run a quick simulation of the Model 1 pure flattener on a generic 335mm. He was not able to get anywhere near full frame focus, though this was done without details of the triplet. I might keep fiddling to see if I can a crop sensor ok to the edges! I think that flattener is really targeted at longer focal lengths so I’ll put it back on its main home of the 700.

I’ll do star photos as soon as I can.

Leemajors: if you already own the ts 279 and you use a crop sensor then it might be worth a go buying it without the standard reducer. That 279 I understand illuminates around 30mm diagonal but the Sharpstar one is bright to corners of full frame. If that 30 is enough you might save about £200. If it doesn’t work so well or you go full frame you can always get the reducer later.

Thanks for the info, have you got a single frame taken with the matched reducer you could share with me? All images I’ve seen with the older doublet version have a cross shape on stars in the corners, was hoping the triplet would be better.
I’m using an Atik 383 which is 22.5mm diagonal.
Cheers
Lee

As soon as I get a clear night. I’m just as curious to see how the triplet fares. My diagonal is 44mm so I’ll try a do some crops at various sizes:

Lee, this is a single jpeg taken with the original 61edph and dedicated reducer, using a nikon d5600 (APSc). Corner stars are a little out of round but I didn't put any effort into spacing since images look fine on a computer screen. 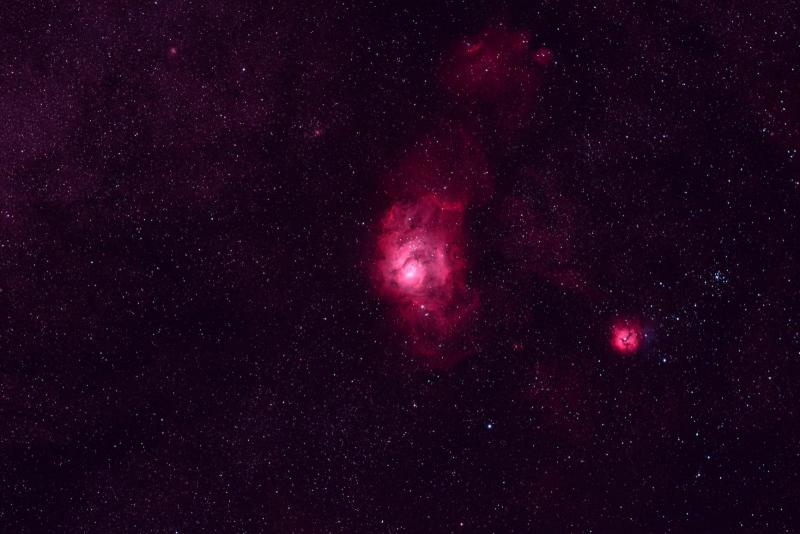 So did you sell the original version to get the triplet? The pic is a bit too small to see the star shapes, be interestijg how the new one compares. 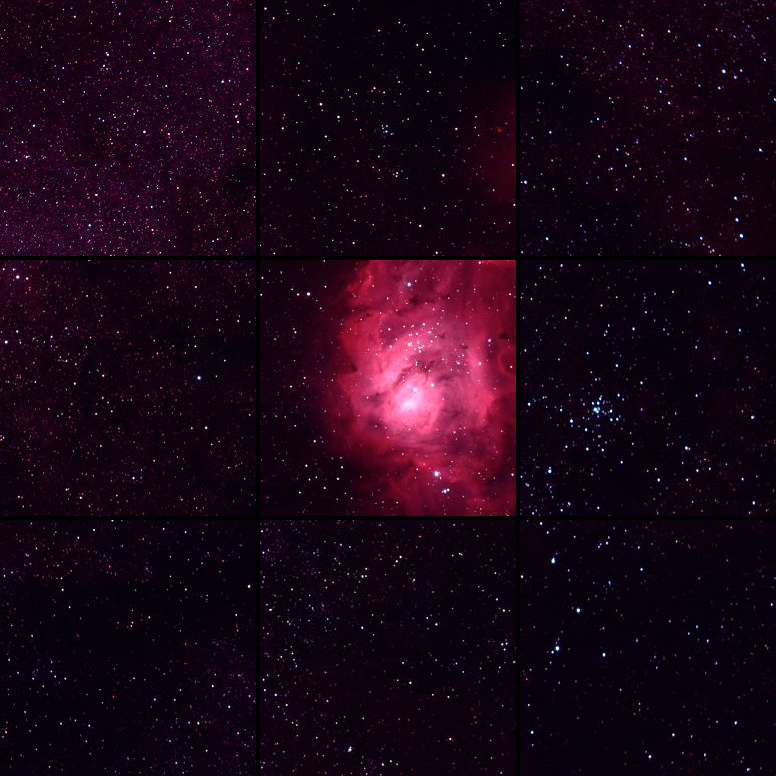 I have sold the scope but only to concentrate on other focal lengths, most recently imaging PN and galaxies with the 150ED. I've also bought a Samyang 135mm which I haven't used yet (not enough clear nights).

Do these Sharpstars accept APS-C sized DSLR's? I've looked at a few and only see the FF/FR for full-frame cameras.

Yes. You just put the crop DSLR on the end of the reducer the same way you would a full frame one. Nothing changes, except that image quality and vignetting are typically higher and lower respectively to the corners of a crop sensor.  People put smaller sensors on telescopes all the time for extra reach and/or to get out of the region where image quality is compromised by falloff and coma etc. So I could swap my Z6 for a Z50 with the same adapters, or a full Canon could be replaced by a APS-C one.

If on the other hand you are looking for a higher power reducer that squeezes the light into a smaller space to lower exposure times, Sharpstar don't make one. It is possible that one of the 0.63 - 0.67 made for some other triplet might work. Someone who has one would have to test it and report!

Did you manage to get any tests this week, we've had a couple of clear nights in Kent.

Not so fortunate in Oxfordshire. Next few nights looking promising fhough.

OK, so here are some star field shots and corner crops. This was June 21 so I had to wait till about midnight for dark sky and I stupidly did not think I would need a dew shield, so no nice nebulosity stacks. This is a single shot on a Nikon Z6, straight out of camera but with a 100% exposure boost on 60s at ISP1600. Note that I had the Altair QuadBand filter on it as I was hoping to do a nebula, but as I said I messed up that bit. This filter rather harshly exposes any differential focusing of red and blue. I've put on a longer ADM dovetail with risers to allow me to keep the focuser in the lower place - I'm right handed so the fine tuning knob is back where I need it. On a Skyguider Pro with PA done with ipolar. At 60s and about 275mm I cam confident I did not have trailing at all with no guiding,

First my working config of the scope for these shots: new dovetail and Baader UFC configured to connect to flattener at intermediate 63mm thread and to Nikon Z6 at the back. It's targeting 94.3mm from the M63 thread to the sensor. Just a reminder that this is the new EDPH triplet 61EDPH II and these are taken with the standard reducer that comes with the scope.

Next single shot SOC except for 1.0 exposure boost in Apple Photos. Very happy again with illumination into the corners. This is a single shot with no flat to correct it.

100% crop of top right of 24x24mm square crop of original shot. My usual approach is to frame my photos on this square and either shoot the square or full frame. I think the square corners are fine, and even the distortion at the edge of full frame is OK. APS-C or DX is not a problem at all. The fringing is evident, but has been emphasised by this filter.

Not the most sensible thing to try some proper imaging at latitude 51N around midsummer. The wind got up as well, so this is just 8x180s with 3 darks and no flats. Altair QuadBand filter, unmodded Nikon Z6 on a Skyguider Pro. But I am really impressed with the illumination into the corners. This is uncropped 36x24mm full frame.

thanks for those shots, the stars look a little triangular in the full frame corners but ok in the 24mm square corners.

Must admit I was expecting it to be perfect on full frame, though I only have a 22.5mm diagonal ccd so would be ok by the look of it.