The May 2019 Challenge is now open. The target is NGC 4565 The Needle Galaxy. To reduce the number of stickies, please submit your entry to this thread.

To increase participation over such a diverse group, the winner will be selected by random drawing. Please feel free to start a thread requesting guidance on your entry prior to submitting it, the whole purpose of this challenge is to learn and compare on a common target. Entries must be submitted by midnight eastern time on May 31, and I will try to announce the winner early in May. Note: If I am late announcing, gently nudge one of the moderators in a private note, it helps wink.gif

THIS IS NOT A SUBMISSION:

But nostalgic comparison/indication of what we had to put up with four decades ago! The scope was my trusty old Newtonian Cave Astrola 12.5-inch F/6. Kodak TP2415 film, H-hypered, single 120min exposure, ~hand guided~ That was about as much as we could squeeze out of Deep Sky Imagery, back in those days!

NGC4565 is my favorite galaxy! I'm looking forward to enjoying the entries... sure they will be magnificent!   Tom

I'll chip in with my effort. Shot from Crumlin, Northern Ireland, at the end of March.

Stack in APP, and processed in PS. 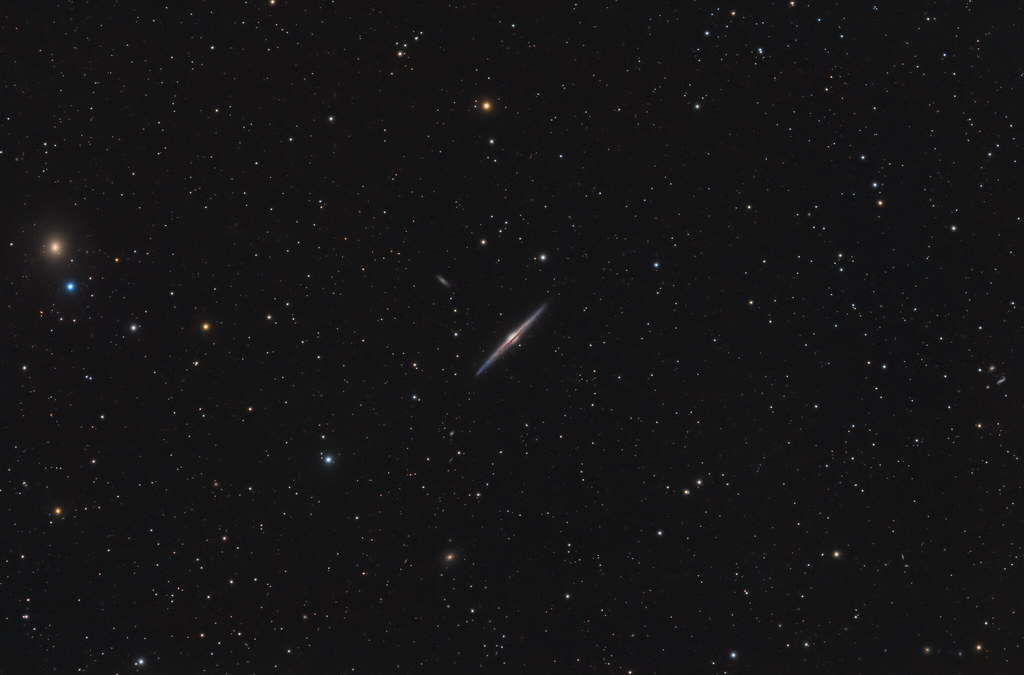 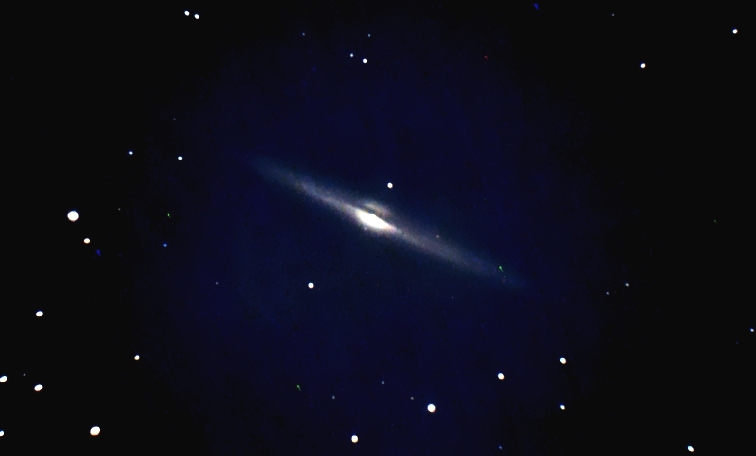 I shot this image of NGC 4565 The Needle Galaxy last Thursday night. I posted it on CN several days later.

The sky conditions were as good as it gets in south Mississippi. Seeing was fair and transparency was good. Moon wasn’t due to rise until about 2 a.m.

Processed with DSS and Startools 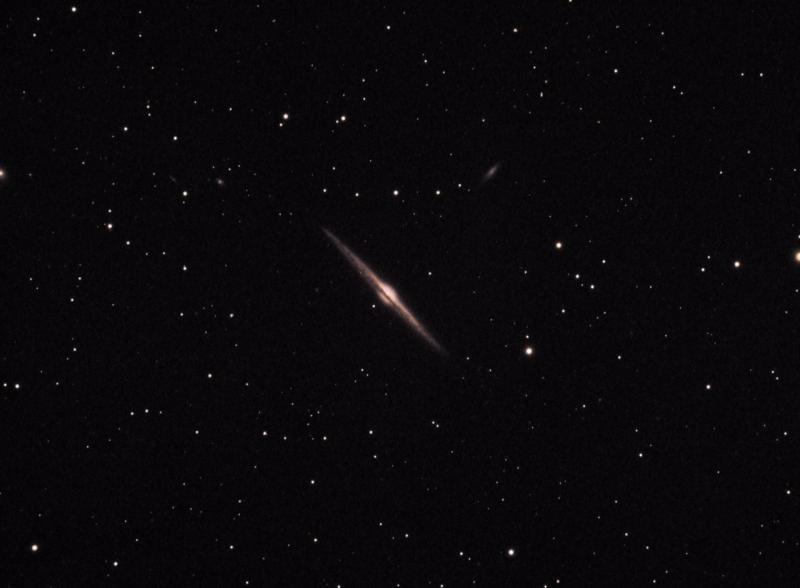 The Needle Galaxy is definitely in this field with Melotte 111 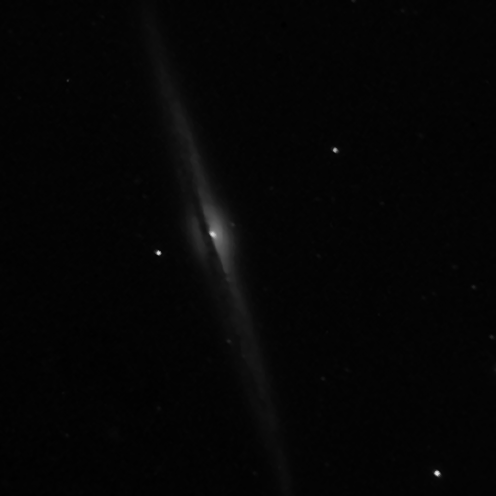 Been planing this run once it was announced.  The night before I tried my luck at auto guiding with PHD2 and the z-filed Arduino controller I've been building.  I took a 5 minute exposure and came out with a nearly round star. I was pleased.

Tonight I started around 6pm reading others' star hop to ngc 4565.  I found my own way once in the filed. I aimed a 20mm eyepiece at Melotte 111 and studied my sky charts.  I kept going back to my charts and starting over from a clearly recognizable part of Melotte 111.   I knew I should be right on it but could not see it.  I thought my scope and eyepiece could not resolve it.  Then my eye or the sky opened up, because it came to view.   I quickly locked up the mount and rushed to get the tracking going.

My telescope has a slide focus and I had to change out a section of the tube to make it shorter, get the DSI on it, and move the sled to the 13th hash marking to get it to near focus.  In Envisage I had short 1-4 exposures to get it framed. I used the Magic Eye focus to get it as close as I could. I thought about rotating the DSI to frame it different. I should have.   I ended up missing the tip of the galaxy on one side, and I really wanted to try to capture 4565A.  Next time!

Started up PHD2 - I had to delete and retrain the calibration for tracking.  This made me have to re-frame again.  I tried a few 30 second tests.  Looked ok.  Did a 2 minute shot and was not mad at it.   Set envisage to save all uncombined images and let it go at 2 minutes a pop. My goal was an hour.  I sat back, listened to music, drink coffee, and used a monocular to get a little visual in.  Started my darks the same way in the software as my lights.   After 21 I was too cold and wet to continue.

Stacking went quick.  I did not load all 30 images and 90% in DSS dropped the count to 26.  Took it into photoshop and had to de-interlace for some reason.  A few quick hits of the levels and curves for processing.  Tony's Astro Actions > Noise Filter.  Cropped it square to frame it center.  Resized untill it saved at 500k to upload here.

I've been dealing with this thing all day, i'm now tired and will play with data another time.  But i'm happy with what I have now.

Taken May 3rd, 2019. Less than an hour into imaging had to do a meridian flip, so I had to deal with the burst from the sensor on both sides of the image. Thin cloud cover ended my session at under two hours. 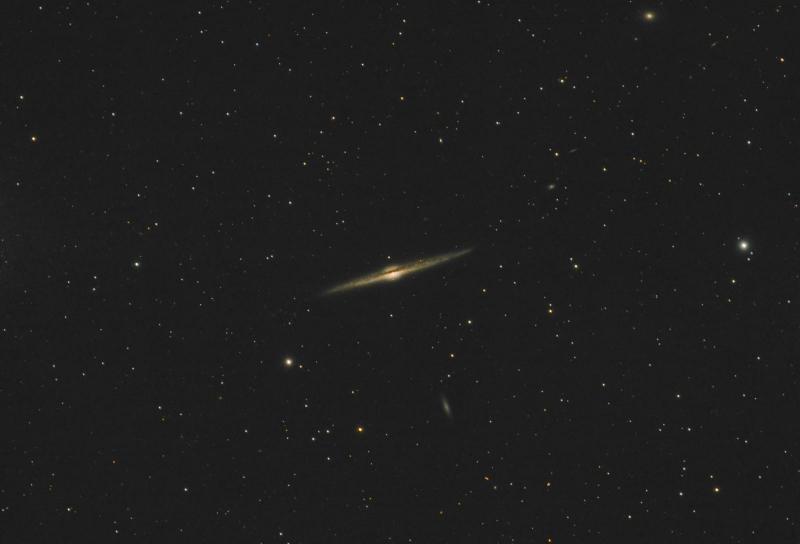 Last night was a clear night, so I took the opportunity to image the Needle galaxy, NGC 4565, from my backyard. Here is my rendition of this cute little gem: 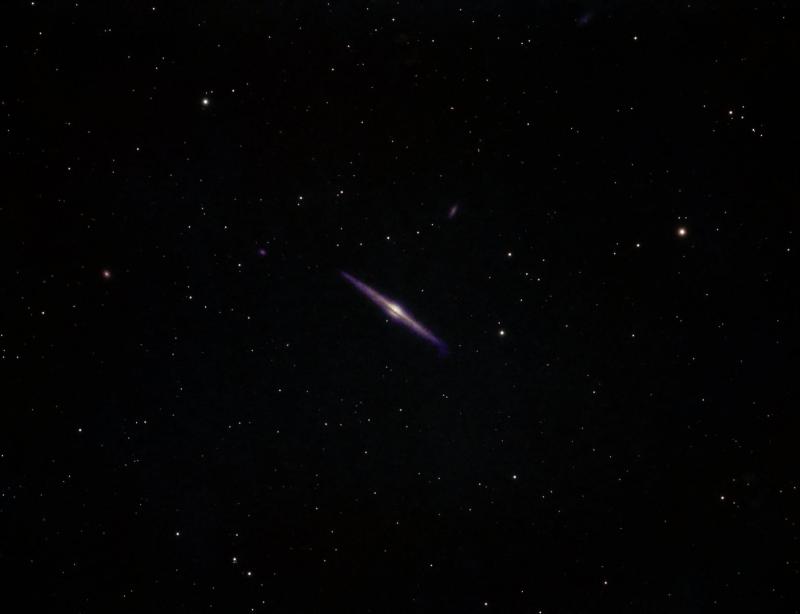 No laptop while capturing & no guiding or dithering. Used the old standby intervalometer for capture.

OTA : Stellarvue 105 triplet with an SV Field flattener - no guiding, no filter

Place of capture - my backyard in S. Texas.

62x60s subs.  This was a frustrating night.  I had my first dew encounter of the year and was not ready for it.  Then, I had guiding issues that made me toss out 14 of the 60 second subs.  I think I have a bad gear tooth on my ZEQ25, but I don't have enough knowledge yet to verify that.  I'll have to get the logs together and post them for help later.  I am also using DSS, and I think that I am going to move up to Pixinsight here at the end of the month.  Also, I am terrible at focusing and will be throwing money at the problem here, also at the end of the month.

My M13 stuff I got this same evening are going to be amazing; seeing got better, guiding got better and I banged on the focusing for about 15 minuted to get something not terrible.  I'll be spending some time on that later this week with the incoming clouds and doom.

I'm happy with the telescope, the camera, the mount and the guiding set up.  I'm now in the "learn to make it all work together" phase.

had to do a meridian flip, so I had to deal with the burst from the sensor on both sides of the image.

Did you take darks? They should match the image frame, not the orientation.

Did you take darks? They should match the image frame, not the orientation.

Yes I took darks and flats. I have been having trouble calibrating the starburst pattern from the sensor out of my images. The darks match the frame as you have stated, but when it doesn't calibrate out of the frame completely it leaves the pattern on both sides of the stacked image (because of the flip).

Integrated image with STF applied. The starburst is worse on the lefthand side, more frames taken after the flip than before the flip. 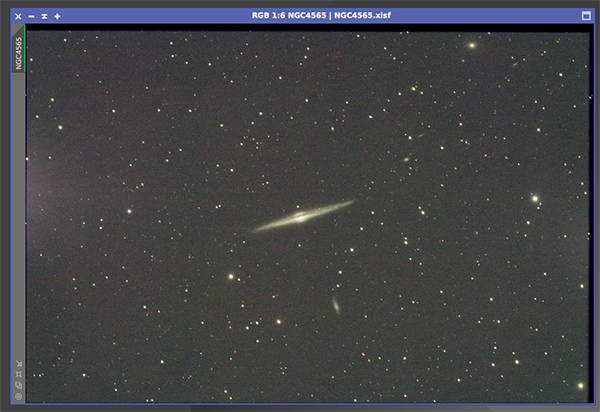 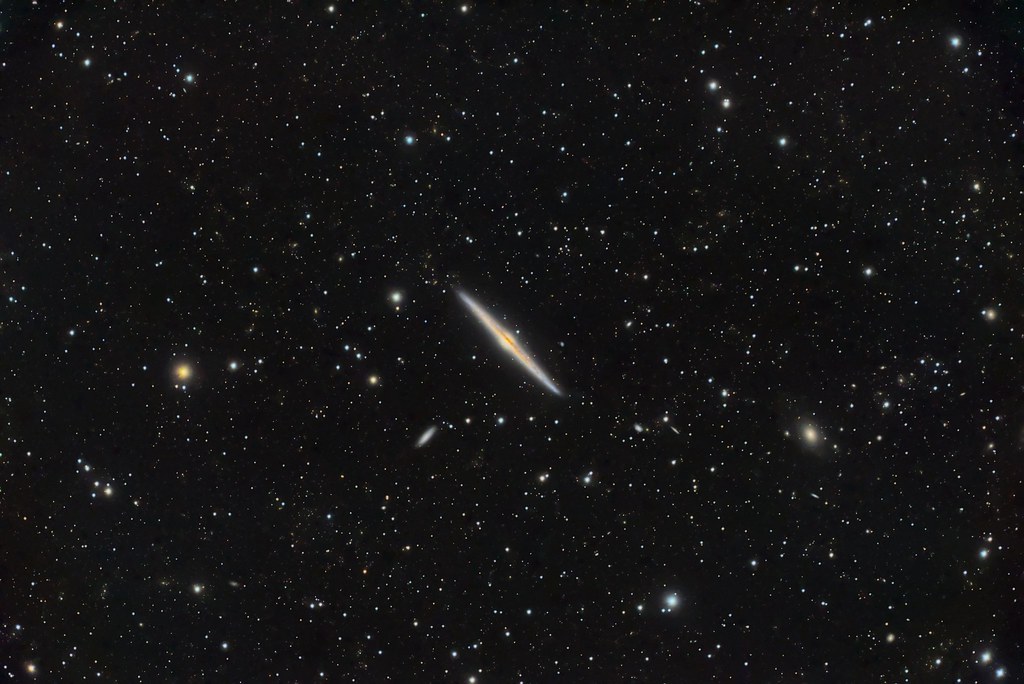 That is a good image!  How well does the ZEQ25 handle an OTA that heavy? I've been toying with the idea of using the same setup over here to get more light gathering for my ASI071.

Yes I took darks and flats. I have been having trouble calibrating the starburst pattern from the sensor out of my images. The darks match the frame as you have stated, but when it doesn't calibrate out of the frame completely it leaves the pattern on both sides of the stacked image (because of the flip).

Integrated image with STF applied. The starburst is worse on the lefthand side, more frames taken after the flip than before the flip.

I’m not familiar with that sensor. On my QHY163m/asi1600, we have to take dark flats as well. Maybe that would help you. I hope you get it solved. Too many frustrating events in this hobby.

Last night was beautiful and clear here which is a rarity, so I decided to give this one a go from my Bortle 7.5 suburban back yard. I was hoping to get about 3 hours of data but due to my laptop BSOD'thing me two times during the sequence, and what I am assuming is mirror flexure as the RC-8 tracks near zenith, I only ended up with 12 keeper subs for a total of 72 min of time :/. Oh well... lessons learned. Also, might be time to research OAG that will work with a DSLR... oh it never ends.

Captured in APT when my laptop wasn't crashing on me, Guided with PHD2, Stacked in DSS, processed in Startools, and refined in Lightroom CC.

The Needle Galaxy (NGC 4565) in the constellation Coma Berenices. A great example of a galaxy viewed edge-on. This is a color composite made from a total of 10 hours of LRGB data taken this past weekend from the @la.astronomical.society dark sky site. Stacked in Nebulosity and processed in PixInsight (AGOptical 10”iDK, 10Micron GM2000 HPS II mount, ZWO ASI 1600mm-cool at -25C)

Acquisition details and better quality image available by clicking on the small image:

You guys seem to be in a similar LP zone as me at Bortle 7-8 (borderline between Red & White). You both seem to have a very similar DSLR like mine, a modded D5300. I use my SV triplet at f7 and use 200 ISO as standard and no filter for galaxies. With my 90 sec subs, I am at 25% away from left on the histogram. So, with a similar LP and assuming ~200 ISO as the minimum recommended ISO, how do you guys manage to get much longer exposures without clipping brighter stars? Are your scopes a lot slower, or is there something I am missing when imaging?

BTW - both of you have shared wonderful renditions. Thanks in advance for any help ...... Anil