Since M87 is in the news with the dramatic image of its black hole, and since I've never observed it with my fast 25 inch F2.6, I devoted a few nights to observing.

First, the galactic cirrus or Integrated Flux Nebulae is surprising in that a band goes directly across the galaxy, making the galaxy's faintest outer regions look extended. I see a broader arc just beyond the galaxy and a faint finger just under the galaxy (in the inverted telescopic view).

Secondly, the black hole's jet is quite the observing challenge. The first night was hopeless because seeing was not good enough. The last night seeing improved to where the stars would sharpen nicely for a few seconds then fuzz out again. Trying to see the jet consisted of watching the stars for sharpening then settling in to catch a second or two glimpse before it all fuzzed out again. The jet appeared quite faint and dark gray in color. Quite surprisingly, I saw it disconnected from the galaxy's nucleus. I found proper magnification to be key: too much magnification resulted in no observation presumably because even during the sharp periods, the jet was too fuzzy, and too low of magnification made the jet just too small to see. 320x worked but slightly higher and slightly lower magnifications were not successful. I managed to see the jet several times; this is indeed a difficult observation at the limit of possibility that took me a couple of nights to succeed.

To relax, I scanned the broad area, delighting in every single field of view filled with many galaxies of different morphologies. Richest Field Galaxy Observing at its best! 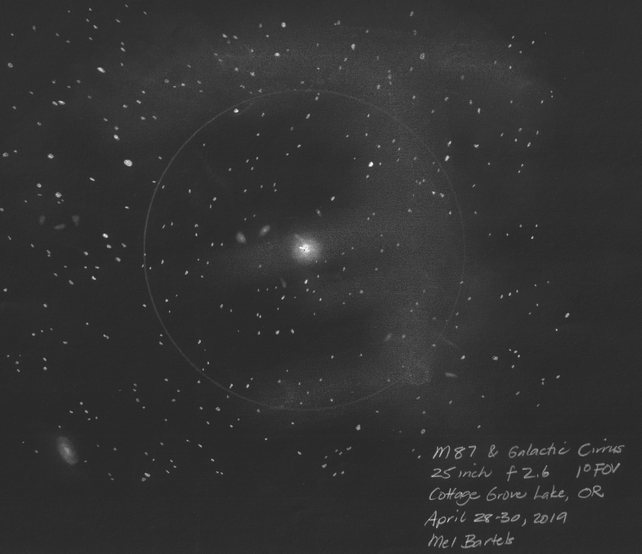 I'm happy that you had a successful night out. There are many times that I wished I lived someplace where the sky is dark enough to have a big dob and see the things that you can see.

Your sketching is excellent!

I have problems drawing stick men!

Really beautiful sketches. I didn't not know it was possible to see the jet with amateur telescopes, even though yours is a very big one!

Thank you for sharing this observation and sketches. Very intriguing!

Superb! Well, I never looked for that before, but will most certainly have to give it a try. I like the near-impossible stuff, and have a big scope and pretty dark skies!    Tom

I did not expect that the jet can be really seen. Great observation!

A confirmation of the great observation of Mels:

I'm really glad you're adding more information to my curiosity on the latest scientific achievement. Great sketches and observations, the galactic cirrus is really amazing

these are outstanding observations

congratulations .I love these sketches .And I don´t know that this is visible .But my scopes are much much more smaller than yours

Superb work Mel!  Thanks for sharing this with the community.

Those sketches are wonderful!

Mel, I would not have thought this was visible with an amateur (ok a big one!) scope. This is impressive and has myself wanting to observe it. Wondering now if the 25” both you and Bertrand observed the jet with (with perseverance) would be the smallest aperture to pull out the details. And also is this a changing phenomenon, or static in our short lifespan.

Cindy, every time I've ever stated a 'minimum aperture', I've been wrong!

So for aperture, that makes 25", 25" and 24" for the low end. I would be surprised if these were the only observations.

I think that good seeing with magnification then observing skill and time at the eyepiece are key. Aperture might not be the dominant limiting factor here.

Beautiful sketches, under the right conditions it's amazing what a large scope can do.