Is STARLINK going to impact astrophotography?

What will be the life span of those satellites in space before they burn in the atmosphere?

I guess its time to sell all my AP gear, burn down my recently built observatory .... should make a nice deposit on buying another Cabo 35 offshore short fishing boat ....

I had a feeling that they can't paint the satellite as black that it would hardly be seen anymore because I suspected the solar irradiance to heat the satellite too much to be working properly. In this case they'd need larg(er?) radiators to emit the absorbed energy again. But the additional radiator area would render the blackened satellite core body ineffective concerning hiding the whole satellite from view as they'd work as sunlight reflectors again. Would be an interesting study how large blackened(!) radiators would need to be in order to emit all the absorbed visual wavelengths in the thermal infrared. I leave that to someone who had a radiation heat transfer lecture in college. I assume it wouldn't work, besides creating a community of angry ground-based IR astronomers

Ultimate solution: restrict the Starlink constellation to about as many satellites as the other planned constellations, or better force the companies to only create a single constellation with the individual companies having a share on the satellites and the customers decides from which company they want online access. This strategy works for all power plants feeding their electricity into the electric grid and the end consumer can decide from which producer they want their electricity and bill from. Why shouldn't it work for space online access.

"There is no question that the entire world is entitled to be connected to the internet…. So it's going to happen."

This infuriates me. Internet connectivity is NOT an entitlement!!!!!!!!!!!!!!

Even if we did, he'd probably just toke a blunt and shrug.

It appears that the FCC has broken the law, making room for a law suit.

Perhaps that would wake up Musk...

Luckily DSS took care of them with no noticeable artifacts.

Looks like scratches on your negatives from pulling the strip through the enlarger....

Could we start a grass-roots movement to have them painted flat black?   Or are there thermal issues?

Actually after some initial response to this horrible condition the second batch launched did indeed have what they 'thought' reduced the reflection off them making them more black. But the change is only noticeable when someone does an in-depth photo forensics comparison into it (which everyone here is capable of in their sleep). In theory they 'claim' they are looking into better solutions (my guess is better filters on their EMail and other sources so the problem vanishes to them - Morons!). I'm thinking that what we will have to resort to in the very near future is using deep learning methods to find and remove, ala content aware fill like reconstructions, on each plate. Not the best solution and kinda causes other major issues (coughItsBadSciencecough) but it could be the route we get stuck with in the future when there are THOUSANDS of them up there!

All this complaining needs to be directed into the FCC dockets approving these launches as well as raising this issue with your congressional office (in parallel with political donations). Additional issues to bring up are public safety (asteroid avoidance) and the fact that it makes Space Commands more difficult to differentiate between possible satellite threats from foreign actors. I also would think cellular and land based internet providers would support this issue for purely shellfish reasons.

Last week I took another video of units from the first launch (May 2019) in final orbit (530 km): https://youtu.be/MLFA1JnRIeA

My estimate of peak magnitude is m3.5 to m4, easily visible to the naked eye, fading to m5 then m6 as they go away to East (sunrise). They are still lit at the zenith with the Sun at -22°, therefore visible on half the sky, in dark night after astronomical twilight (Sun at -18°).

We will see how the "darksat" behaves once in its final orbit, but I'm afraid it won't make a huge difference...

Luckily DSS took care of them with no noticeable artifacts.

Those are going east-west in Orion. Not starlink/oneweb/anything in an inclined orbit.

Last week I took another video of units from the first launch (May 2019) in final orbit (530 km): https://youtu.be/MLFA1JnRIeA

My estimate of peak magnitude is m3.5 to m4, easily visible to the naked eye, fading to m5 then m6 as they go away to East (sunrise). They are still lit at the zenith with the Sun at -22°, therefore visible on half the sky, in dark night after astronomical twilight (Sun at -18°).

We will see how the "darksat" behaves once in its final orbit, but I'm afraid it won't make a huge difference...

Which is exactly what the geometry of the problem would predict. Yes, things will suck at higher latitudes.

thanks for joining this discussion and showing us your latest video. You are doing great work. Just ventilating our gut-feeling about this network is of course quite subjective, but people like you make the difference by actually doing measurements and showing that indeed (for the moment) there is not much difference between a painted and not-painted satellite!

Those are going east-west in Orion. Not starlink/oneweb/anything in an inclined orbit.

What other satellites are in groups? All the more reason we don’t need more garbage up there.

What other satellites are in groups? All the more reason we don’t need more garbage up there.

Geostationary/geosynchronous satellites, with the ones particularly close together being shared slots. They've been there for decades already.

In edition 73 of Amateur Astrophotography Magazine an exhaustive article is published on pp.12-23 by Stefano Gallozzi, Marco Scardia and Michele Maris, three Italian astronomers. It discusses the various mega-sv-constellations, their impact on science, and shows how the US government can be held accountable for the damage done, based on several international conventions and treaties. Hopefully someone with enough influence (and finances) will pick up the glove thrown here, so that this will not become the next CFC, carbon fuel emission, or plastic disaster to deal with for future generations....

PS today I have been in contact with Stefano Gallozzi and given him the link to Theirry's recording of the 'darksat'.

So apparently SpaceX is going to SpinOff Starlink as a different business. I can't think SpaceX is very aware of how Financially exposed Starlink will be to Lawsuits and is trying to protect itself. I can't think how a Class Action lawsuit is not already in the works.

On the other hand, I heard in some local media that any or at least quite a few relatively influencial entity, like states and large organisations, would be cautious with criticism because any critics might well backfire once said entity tries to do something similar. And, thus, any fears that nothing substantial concerning downscaling of those constellation fleet plans happens are not ill-founded.

*Put in swear word* ... I can't stand the mere thought of not experiencing any colourful dusks anymore in the future without numberous cliterings of annoying internet-satellites.

Interesting breakdown with simulations of what our skies may look like in the near future...

Any news as to whether any entity has already raised objection against SpaceX? In two weeks it will be too late.

Nope, the only lawsuit in combination with Starlink concerns Subaru... :-(

In the meanwhile Gallozzi has added links to Thierry Legault's video on the Astronomer's Appeal Page (scroll down to the first video).

The letter by him and his colleagues does get plenty attention: https://www.popularm...spacex-lawsuit/

They also made it to Le Monde, the French national newspaper: https://www.lemonde....e-astronomique/

New wide field footage Saturday morning, a group at final altitude (550 km), including Darksat, passing near zenith at astronomical twilight. Darksat is one of the brightest, at mag 2.5!!! 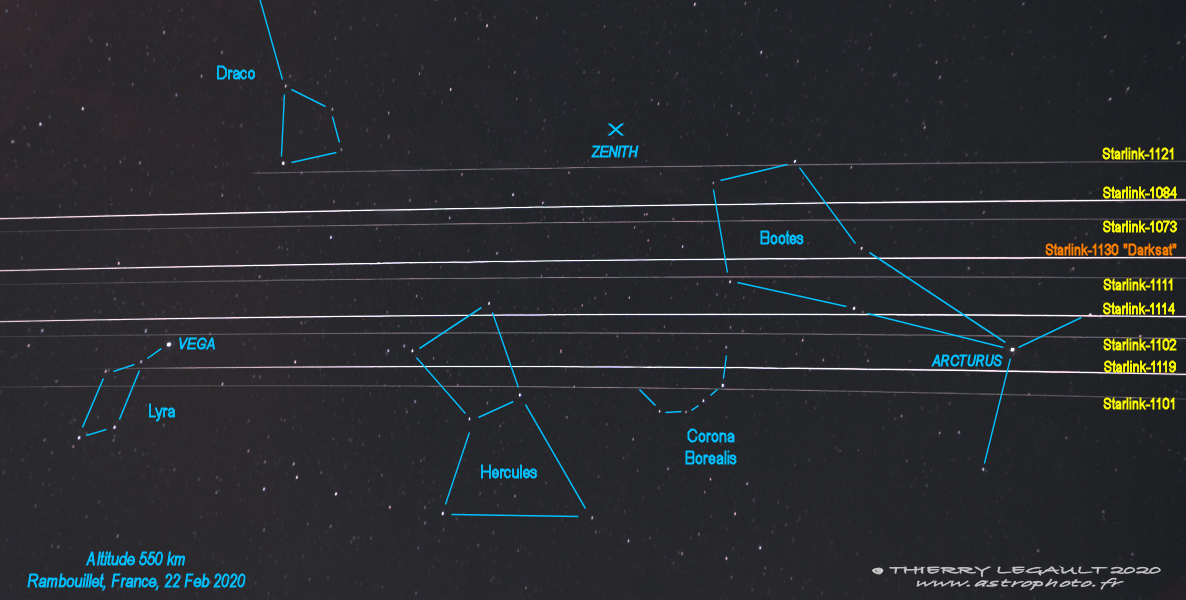 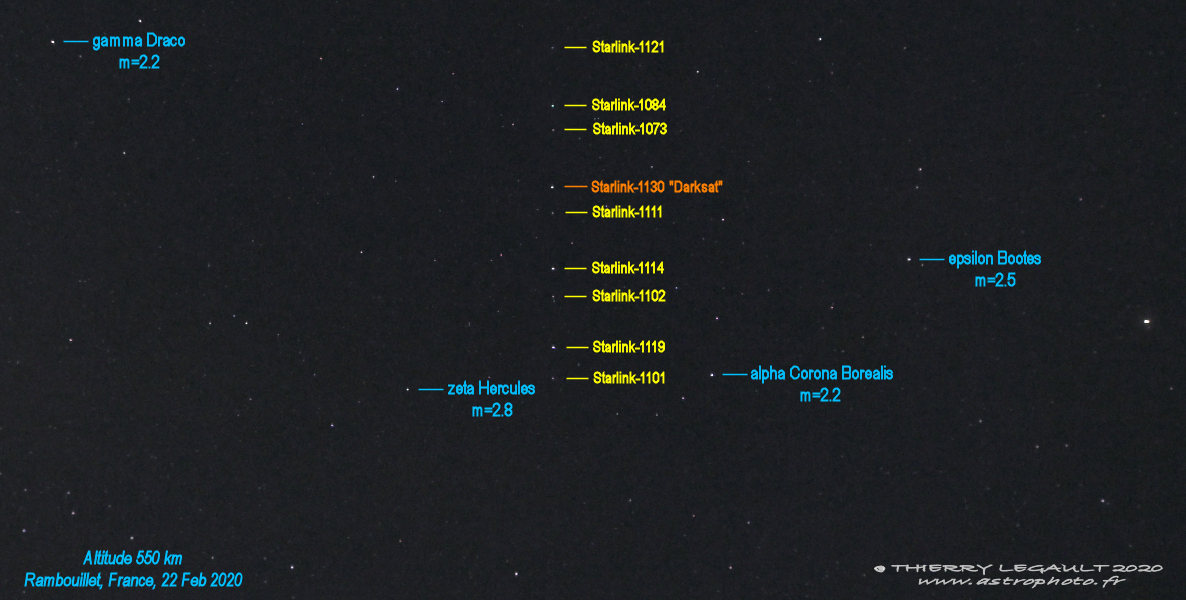 Just after I filmed a passage at low altitude of a close chain from a recent launch, all were brighter than the stars of the big dipper!