Starlink satellites: There goes the neighborhood

I will offer an addendum to this, after some furthe consideration.  I've been approaching this in the midset of a polar (or near polar) orbit, akin to the Iridium Satellites. However, the initial batch is at 53Deg inclination. I cant find anything about the full constellation layout, where the 1200km satellite shell will be. The first 2 prototypes went to 97 deg, but thats likely due to the ride share they went up on, more then operational use case.

Satellites in this area, particlary in the norther sky during summer months, will have a longer visibility window, even lasting through the night for various rings.  I still challenge how bright they will be, especially the ones at 1200km. The current craft up there are slated to be around magnitude 5-7, the light falls off quick (inverse square of distance) and gives the 1200km shell a much lower magnitude.  Couple that with improved albedo in the design shop, their physical size, and the narrow FOV of a telescope.....its all going to be ok.

I dunno. I think it's going to be a problem. Someone already caught a bunch of em in a single frame...and it's pretty darn nasty!!!

These are not your average satellite trails. These are BRIGHT!!!! Now compound 60 into 12000...and then, compound it even more with multiple players tossing more junk up there...tens of thousands, hundreds of thousands...

Someone also noted the likely improbability that albedo could be lowered, and that there are reasons satellites are bright and highly reflective. A high albedo means low reflectivity, which means higher absorption of energy from the sun. If that is an issue, I don't foresee the albedo of these things getting any lower...

Someone already caught a bunch of em in a single frame.

Image was taken May 25 (48 hours after launch), when they are still low (440km deployment --> 550km opertation).  Wait for them to get up where they belong.  It was also noted by spacex that the solar panels were not oriented in the proper direction at the time all these crazy images came out.

As of this afternoon, the 60 satellites are spread out into 3 clumps, the angular distance from the first to the last is almost 180 degrees.   I'd love to see one of this "interference" shots taken anytime in the last 48hrs, or over the next weekend.  I will be out looking too...provided my weather cooperates.

Might not be a truly "albedo" fix in the true sense of the word. but you can engineer the facets and walls to reflect light away, or even 'rolling' the craft a few degrees if need be.  Its a relative albedo fix.

We are going to look back at this sometime in the future, when I am not probably around and say what the heck were we thinking?  We were so primitive back then.

More stuff in space with little or no regulation is not a good idea.

Who owns space where they can tell others what to do up there? There is a treaty

There goes the neighborhood indeed!

I have correlated this swarm of satellite trails that messed up one of my frames last night to the Starlink Group.  This is a calibrated and stretched 120s exposure of M101 at 1.37"/px (2x2 binning) using a red filter.  I used the CalSky website to verify that these blasted little satellites tracked across my skies over a 45 minute period or so, with the leader passing N of M101 and the trailer passing S, and this frame was taken during that time interval.  I also correlated the direction of these trails with the paths of the little buggers almost exactly.  These are almost assuredly some of the satellites in the middle of the swarm. 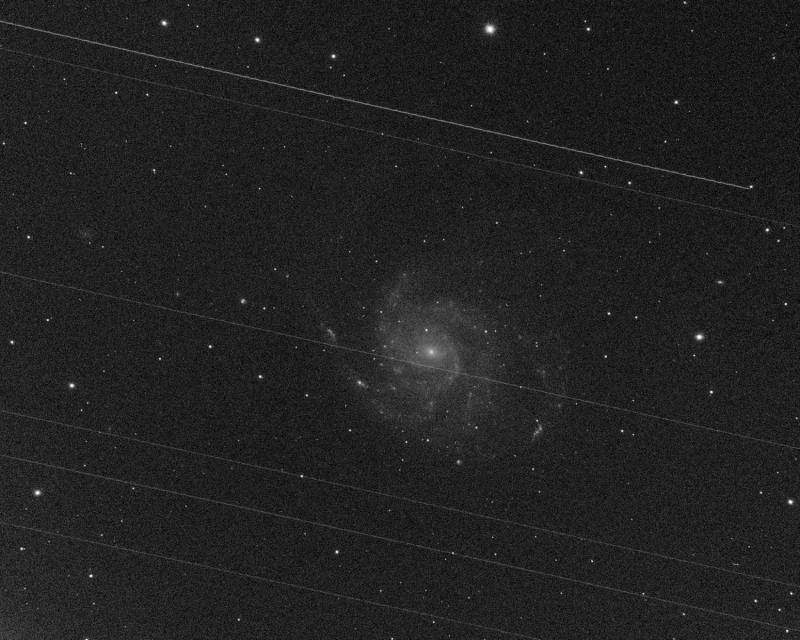 So, I guess with plans to launch many more of these, we can expect this sort of thing to happen more often.

I came across a quote from Elon Musk about what little impact all these satellites will have on astronomy:

"There are already 4900 satellites in orbit, which people notice ~0% of the time. Starlink won’t be seen by anyone unless looking very carefully & will have ~0% impact on advancements in astronomy. We need to move telelscopes [sic] to orbit anyway. Atmospheric attenuation is terrible."

Yes, if I had the kind of money that Elon Musk has, I'd launch my telescopes and camera into orbit to get above this terrible atmosphere!  But I don't, so I'll need to shoot through his growing constellation ... Furthermore, some of us do indeed notice those satellites and they have an accumulative impact on our endeavors ...

I can't even do a 3 minute PA using a Pole Master without 5-6 satellites passing through it's frame in just 3 mintutes. I can't shoot M42 or the Horsehead with even more geosynch sats showing up.

This is not something new.

My darksite  happens to be nearly under the northern range of DIA's approach/departure flight path. There are always 20-50 planes visible all night long, not like a satellite.

I've never tossed a single sub because of them, or a dozen satellite trails, mixed in.

That's what Kappa Sigma is made for.

In addition to a whole slew of pixel rejection methods, PI's ImageIntegration process also has a relatively new Large-Scale Pixel Rejection section that helps remove (reject) satellite trails like this if they aren't too egregious.  That frame I posted will probably still be usable.

How bright are the stars in the background?

The satellites haven't fully separated yet, so I can see why folks are still getting multiple streaks in the same sub.  The Heavens Above site has these around 6th magnitude, but in your photo they look much fainter.  I know that the star at the top of the photo is SAO 28988, and it's 8.0 mag.

How bright are the stars in the background?

The satellites haven't fully separated yet, so I can see why folks are still getting multiple streaks in the same sub.  The Heavens Above site has these around 6th magnitude, but in your photo they look much fainter.  I know that the star at the top of the photo is SAO 28988, and it's 8.0 mag.

Keep in mind that this was a frame taken using my R filter.  Also, the brightness of satellite trails is very much a function of its own reflectivity as well as the position of the sun.  And then there's the usual atmospheric attenuation, my local seeing conditions, etc.  If the pass had occurred at another time I may not have even seen the trails.

I’m just going to sell my refractor and move exclusively to long FL/small FOV imaging of the tiny things. I almost never get a satellite trail when imaging with the SCT. I suspect I can deal with a few per session.

Awhile back we visually saw the 3 that failed in the first group or 60. There was 5 of us out at a dark site observing and we watched 3 objects slowly move across M11 the Wild Duck cluster. They where easy to see with a scope or binoculars and took a good 5 minutes or so to cross M11. You could not see them without a scope or binoculars. M11 was in the south eastern sky a number of hours after sunset. At the time we did not know what we where looking at, it took some research the next day to find out.

Elon Musk and SpaceX are now planning to put up 42,000 of these buggers. Google and Yahoo want to put up their fleets too. I think the ones that fail like these are going to be the real problem. SpaceX says the orbits of these 3 will decay and they will burn up in about a year.

I had some StarLink train of satellites fly through some of my subs - fortunately I took enough it didn't affect the final image - https://www.youtube....h?v=Sj-zcccPgrQ

I had some StarLink train of satellites fly through some of my subs - fortunately I took enough it didn't affect the final image - https://www.youtube....h?v=Sj-zcccPgrQ

Likely not StarLink satellites. As Dave noted, the belt and sword of Orion are the playground of geosynchronous satellites. The length of the streaks strongly suggests geosyncs as well.

Nothing new as such I guess, but a good summary nevertheless.