The June 2019 Challenge is now open. The target is M106. To reduce the number of stickies, please submit your entry to this thread.

To increase participation over such a diverse group, the winner will be selected by random drawing. Please feel free to start a thread requesting guidance on your entry prior to submitting it, the whole purpose of this challenge is to learn and compare on a common target. Entries must be submitted by midnight eastern time on June 30, and I will try to announce the winner early in July. Note: If I am late announcing, gently nudge one of the moderators in a private note, it helps

This is a wonderful choice. I had imaged it on 13th of April 2019. So, here is my image, cropped to meet CN's size restricions, but still showing 3 other Edge-on galaxies. M106 is the larger galaxy at bottom right. Even though M106 was relatively small in my image, it still showed a lot of the turmoil that is happening close to the center of the galaxy : 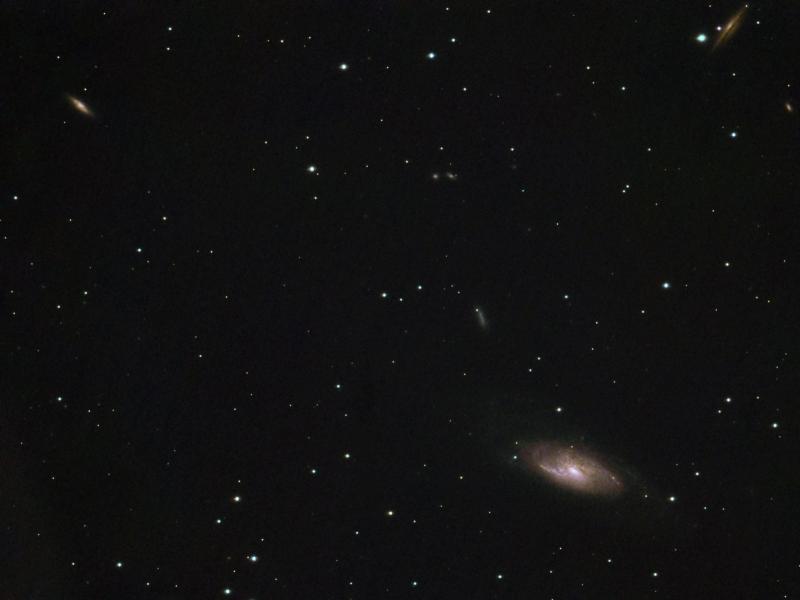 My capture details are:

Took all calibration frames (bias, darks and flats) for intergration in APP,

Since M106 (bottom right) was rather small, I am taking the liberty of showing a deep crop of the same image to show M106 better : 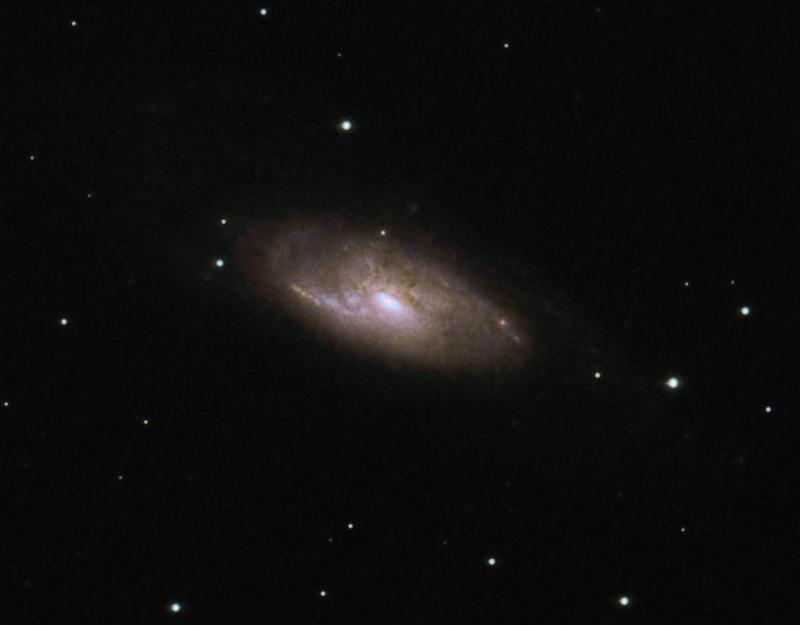 Other notes: Moon was half lit and there were upto 25 mph wind gusts which resulted in somewhat odd shaped stars. Hope others have much better renditions of this little beauty! Cheers ..... Anil

The ASI071MC Pro and my STV 102 combine for  an image scale of 1.4" per pixel.  Not exactly galaxy killer territory.  This  is 69 x 2 minutes and was taken last night  at 200 gain at -5C with just darks and flats. Stacked in DSS. Developed in Star Tools and Gimp.  The CEM60 mount was autoguided. 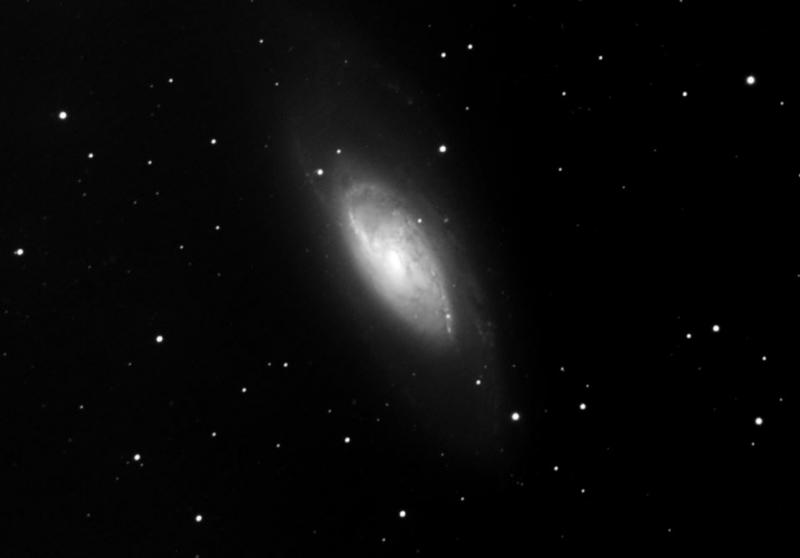 Thanks! I do recall, with a combination of dread and pride... that an ~all-nighter~ back then meant about three images, comprising six or more hours of "hand-guiding" and hoping a cloud, hiccough or distraction would not ruin the entire effort. And then leaving for work before dawn, not having slept! As with accomplished contributors here, I got my technique down by... practice, practice, practice! That image of M106 is the 242nd Deep Sky exposure that I collected with that scope... comprising well over 600 hours of hand-guiding. By then, I pretty much had quelled all the addressable bugs/trolls/gremlins involving equipment and technique. No coincidence, my heroes are the likes of William, John and Caroline Herschel, Messier, Burnhams (both), Hubble, Secchi, Dobson, Levy... myriad others. Aside: The original works of Copernicus, Galileo, Brahe... read that stuff --- those guys were absolute genius maniacs! We often imagine them as lightweights, by modern standards... just not so... if anything, we ~moderns~ have an immense legacy supporting our modest efforts.

I guess that's why I do mostly visual now-a-days and enjoy admiring the images that you all share here!    Tom

Processing was with Nebulosity (gradient removal, grayCstoration) and Gimp (curves)

The small thin galaxy off to the right side of M106 is NGC 4248 (mag 12.5) and appears to be a companion galaxy to M106.  They are both about 23 million light years distant.   Definitely, a tip of the hat to all those who imaged galaxies like this on film manually guided back in the day!

Probably because you don't debayer your files after preprocessing and before alignment. 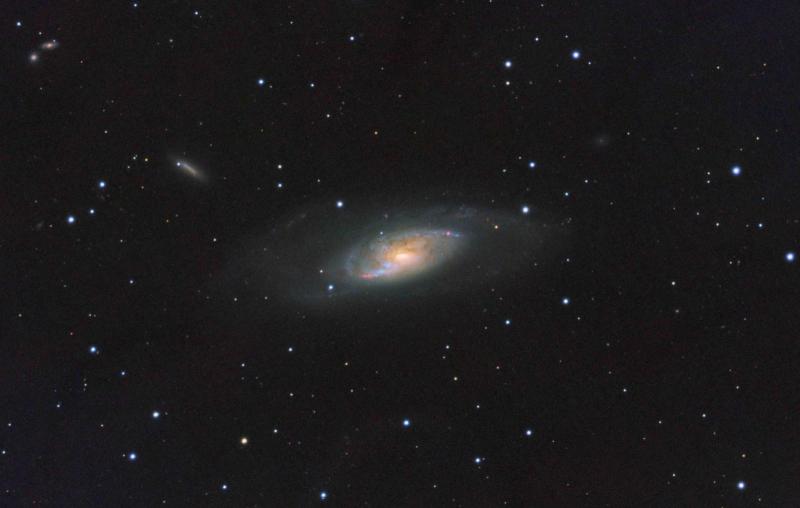 I was hoping to get more time on this, but it looks like that's not going to happen.  Click on the small image for acquisition details. 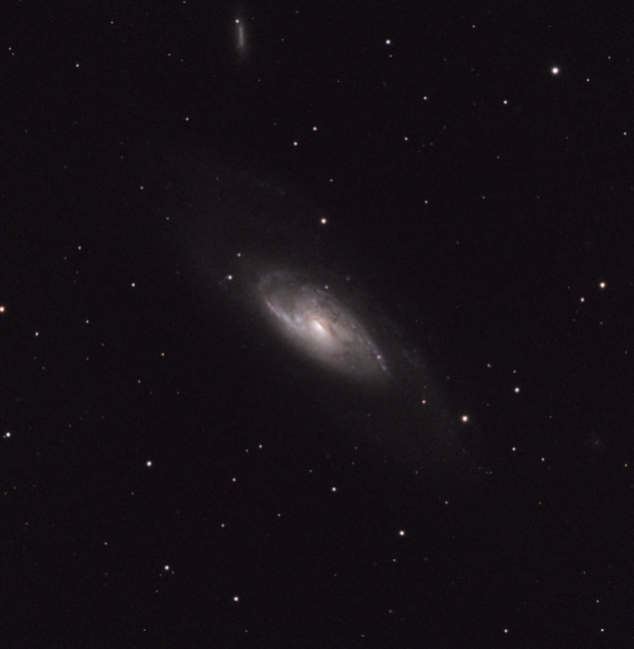 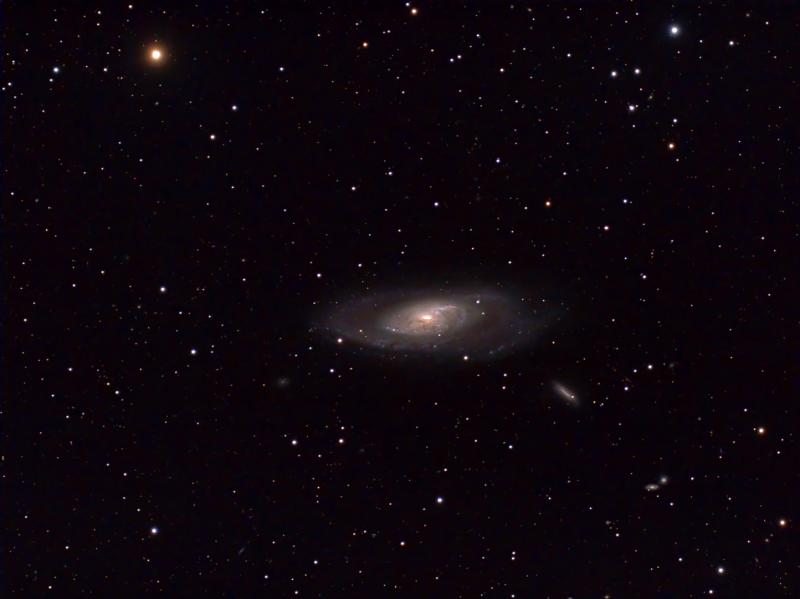 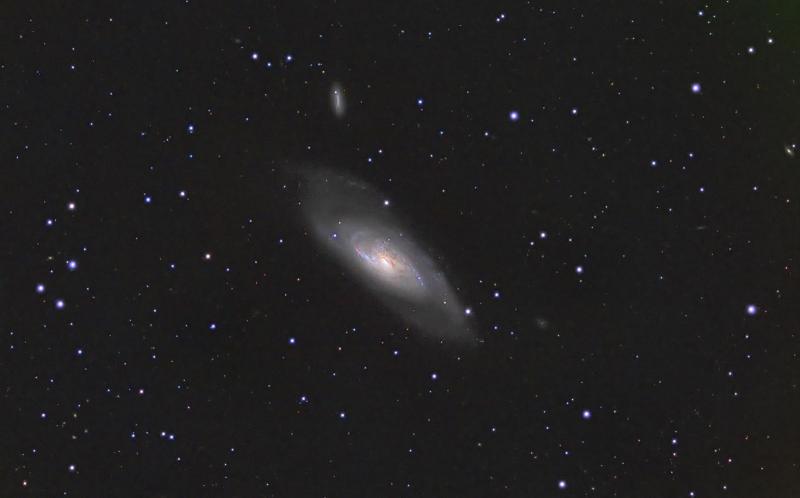 This was first time using MureDenoise in PI and it left an unusual "weave" pattern that I have since learned to avoid. (Always more to learn with PI!)

Last night 6-8-19 was my very first night of imaging ever!  I got this and M101.  I had actually been imaging M101 and I was on the forums looking for some help when I noticed the imaging challenge and wanted to take part! Unfortunately I can't seem to get more color in M106, I think with the 183mm I need to take longer exposures I've read.  Super excited to finally start my journey into astrophotography, It only took 20 years after I got my first telescope!

(I have a SharpCap License used for Polar Alignment, Asicap just seemed easier for imaging at the time.)

10 Flats ( taken at 50ms with the histogram showing 30k. Used a tshirt and daylight)

9 Darks taken after imaging using all the same settings. 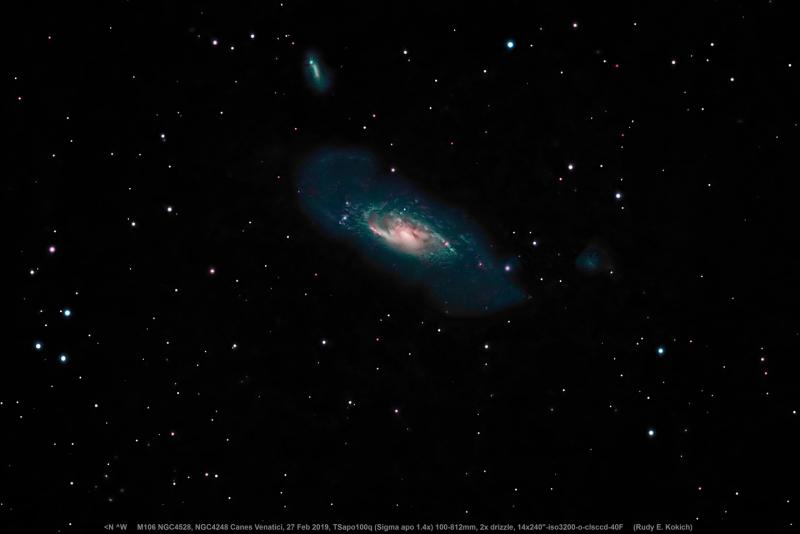 This is an LRGB image of M106. I wanted to include NGC4217, an interesting edge-on spiral galaxy in the same frame. NGC4217 is a possible companion galaxy of M106. My goal was to maintain some of the color in the surrounding stars and also provide some detail in the core of M106. With the short nights and a limited western horizon, my integration time is short. 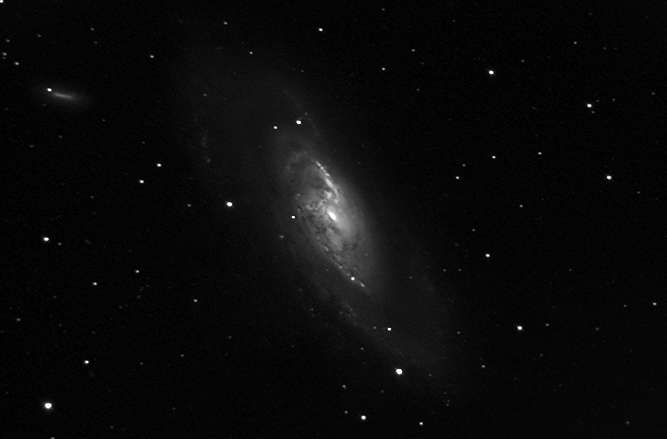 The wireless adapter on the mount locked up and lost connection so the target drifted some.  It would not reconnect with a reboot of things.  Thinking it was caused by me messing with the handset to the window laptop.  Ran things off of an iPad using SkyPortal.

Processed in Nebulosity with 41 flats and 20 darks.  There is some lines of noise that start getting pretty bad if I try to get more detail out.  I am improving but doing something(s) wrong still as if I add bias frames the signal goes to zero.

Best I could manage this month.

So this is a widefield shot. M106 appears as little more than a smudge.... The two bright stars on the right of image are Alioth & Phad 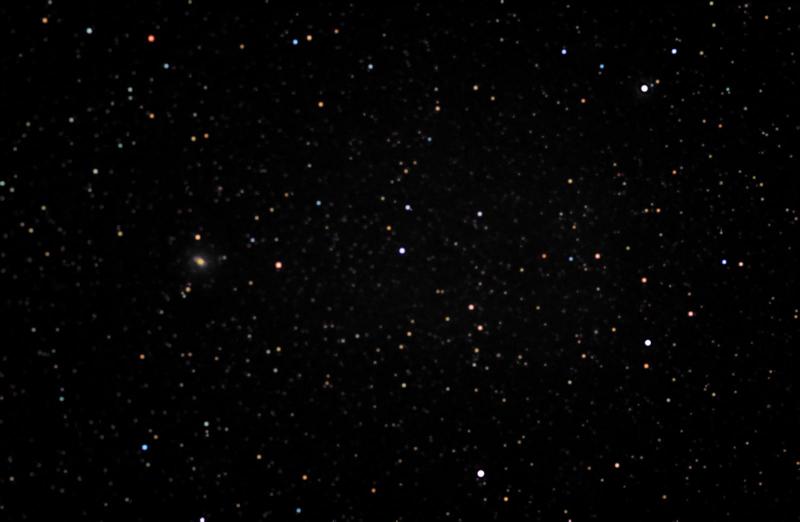 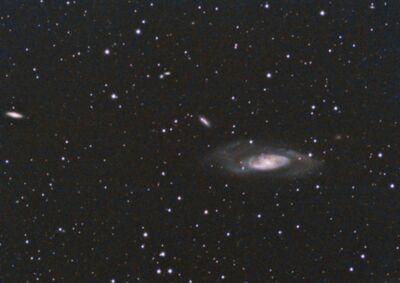 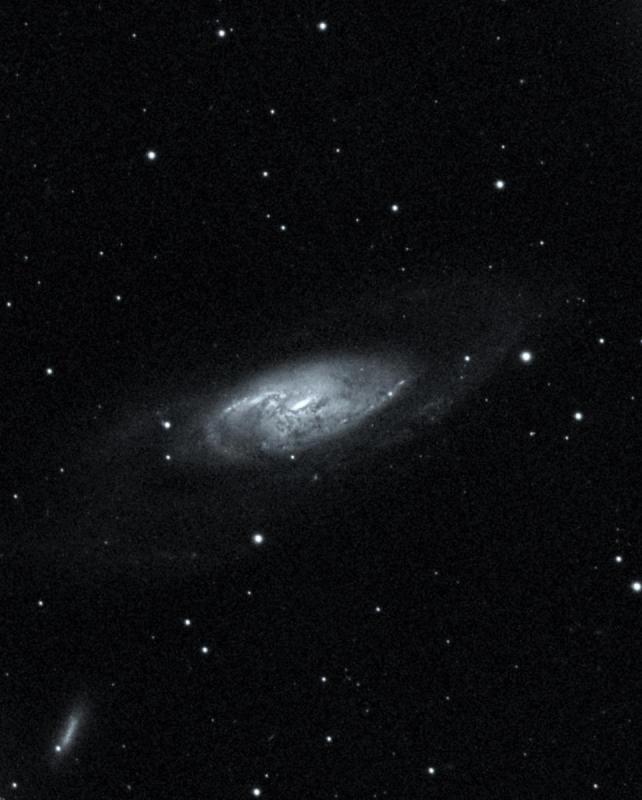 Taken the morning of June 8th from Boerne , Texas with QHY183M and ES127-FCD100 on CGX mount with Orion 60mm guide scope and QHY5III290 .  Only 25 minutes of total exposure ; but my very first attempt at guiding ; I had some technical difficulties ; I promise to do better next time .

So, this has been a month of frustration, and therein, learning, both in terms of technique and potential upgrades to my current equipment.  Thanks to all those who have pitched in their comments and ideas.

Below is the result of 4 nights combined imaging, each with a different emphasis in trying to get a better set of subs, and each limited by either or both weather (poor seeing and transparency) and technical issues (flakey intervalometer).  Normally, one wouldn't mash such data together by simply putting each night into a tab in DSS and pushing "Go", but I neither have the skills nor probably the software to process them separately for subsequent merging.  A challenge for myself next month, assuming the new imaging target won't be so, um, time challenging, is to try APP instead of DSS+ST.  The "problem" this month has been that, as messy as this has been, adding each additional night's data has improved the resulting image.  So, this is surely not the best that can be done with the data, but still better than what I'd get otherwise.

Sub Exposures varied from 30 seconds to 2 minutes; three nights without and one night with an Astronomik UHC filter.  One night was at a really dark site (until the Moon came up), somewhat sabotaged by a flakey intervalometer which shortened the maximum sub exposure times to 30 seconds each, and a nasty breeze that pushed the AVX and PHD2's ability to keep stars round.  Total image integration time 4 hours 34 minutes, 43 seconds, which is a personal record.

Stacked in DSS, processed with StarTools.  The image here is about a 50% crop, due to the wildly varied alignment from one night to the next.  I'm rather impressed that DSS was actually able to make sense out of the lot.  On the final night I finally got Plate Solving to work, so at least that issue has been more or less solved for future imaging.

Acquired with SGP, processed with PixInsight as LRGB and final tweaking with Photoshop.

From my backyard with Bortle 5 skies.