I do not know what to make of some folks. Who on Earth would throw this telescope into the neighborhood dumpster?

There has to be a story there. Was it an angry act against somebody...or merely cleaning the garage of the "toys" of a child long-gone?

Possibly, a tool of a hobby that never went anywhere; a Twinkie who never had to work very hard? I dunno.

Whatever the background, I do not understand why anyone would throw a scientific instrument like this away. It could have been donated any number of ways.

Or sold. This was in a wealthy neighborhood.

My apprentice happened to be dumping his trash when a man pulled up to the facility and proceeded to throw this 8" Meade LX-50 OTA, wedge, and tripod into the dumpster. It landed "soft" as shown by the only damage...a very mild dent on the tube.

It is amazing; there is not a scratch on the corrector, the drive works, nothing looks abused/used at all, the primary is pristine.

Yep, the collimation is off. I just roughed that in via set of Bobs Knobs...indoors. Too early to say how good the optics are (!)...but I know that it works.

How lucky am I that my apprentice was there??????

I am extremely lucky, and I am VERY appreciative of that..very.

But we see plenty of valuables being thrown away around here. It makes me sick. A couple of years ago I saw a guy throwing away a pristine, high-$$$ couch away. I asked him "wow, that's a really NICE couch. Is there anything wrong with it?" His reply...."the wife doesn't like it, do you want it?"....I replied by motioning towards my sedan...too small to haul it.

I will value somebody's "trash" whilst never understanding the extreme wastefulness.

Societal Critique over....HUZZAH!!!! I have a cool new scope for...ummm...nothing! 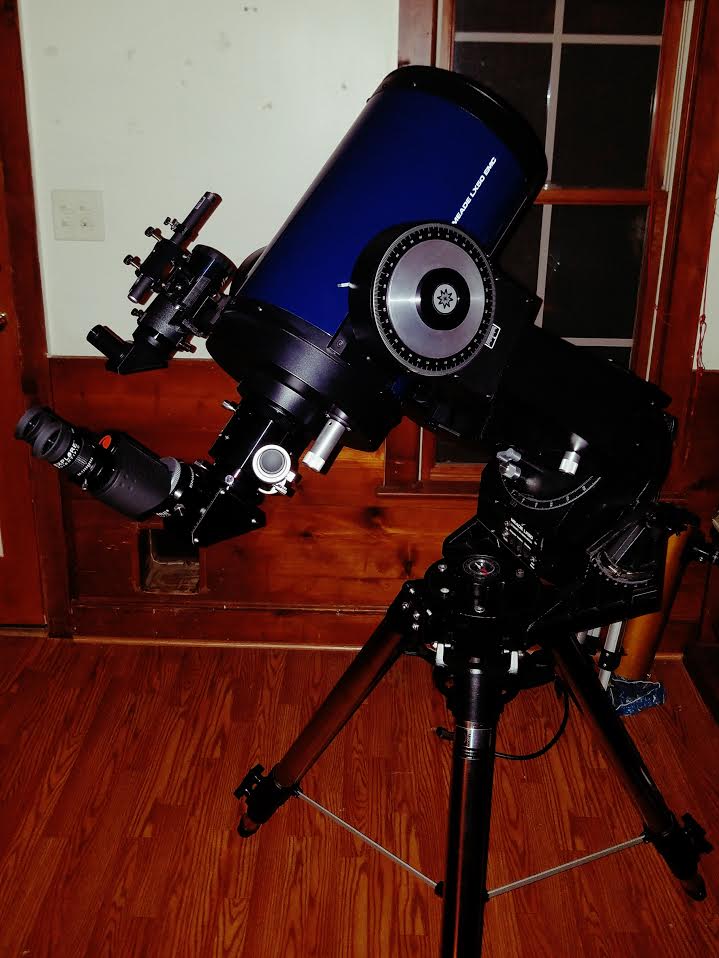 Did it come with that focuser??

Did it come with that focuser??

No, it was the raw scope, original finder (lousy but pristine), wedge, and tripod. Everything else you see adds up to approx $300 of used gear including the binoviewer, ES 70 20mm eyepieces, 7x50 RACI finder, green laser finder, brackets for the finders, GSO focuser, Meade compass for the scope base. All used accessories total right at $300...plus $50 for the used ES diagonal (as new)

OP:  "I do not understand why anyone would throw a scientific instrument like this away. It could have been donated any number of ways.

Reply:  “Think of how stupid the average person is, and realize half of them are stupider than that.”

From the looks of it you got lucky when it landed, no parts were broken..

Congratz on a good find..

I believe your key words here are "wealthy neighborhood".

"I've grown tired of looking at that thing
.. Rubbish! Take it away! Be gone with it! If I desire again, I shall buy new, and better!

Guess I need to roll through the rich hoods on garbage day.. nice find!

Sounds like your apprentice was lucky. How’d you end up with it?

Nice find for sure! And being a freebie makes the rose smell all the sweeter. I’ve been prompt to do a dumpster dive or two over the years. It is crazy what people (and businesses) pitch!

Darned fortunate to be there at the time. A shame the scope couldn't have been spared the toss....

If you're going to dumpster dive, the "Up-Scale" neighborhoods are where to go; quite a few members of the "More Money Than Sense (or conscience) Club.

With that kind of luck, YOU need to play the PowerBall Lottery... lol

Sounds like your apprentice was lucky. How’d you end up with it?

He gave it to me in trade!

Not saying that this is the case since it is amazing the things that do get tossed.  However there might be a possibility that it wasn't legally acquired by the person who tossed it.

In my area, items that could be useful to someone are lined up near the dumpster for people to retrieve.  If not claimed by the end of the day, into the dumpster they go.

One man's trash is another man's .....  Glad you rescued that poor thing.