Description: M74 as I saw it through my 16-inch at 225x from Cherry Springs Dark Sky Park in Pennsylvania on the 29th of December, 2010. A digital drawing. This is my submission to this month's contest: AR 1176 in H-Alpha. It was very active with some small but bright proms and and a nice filament. My submission is of my recent sketch of the Eta Carina Nebula done using my 17.5" dob from my home in Sydney Australia. I had posted this sketch earlier this month in the sketching forum.

This was by far my most challenging sketch to undertake. It is also my most satisfying one.

That it was done under the light polluted skies of Sydney makes me wonder what a repeat undertaking from a dark site will reveal additionally.

The supermassive star that lends its name to the nebula, Eta Carina, is the bright, reddish star approximately in the centre of the sketch. This is my submission of a sketch of M13 - the Great Hercules Cluster. The drawing was made in Negev desert, while I was observing with my 8" Newtonian.
Sky transparancy was excellent (~6.8m), and M13 showed rich detail - including star streaks and dark filaments. Among them the famous "propeller" could be easily spotted (slightly right from the cluster's center in this sketch).

I sketched this image of M57 during the memorial day weekend, from my backyard observatory here in Cologne, N.J.
Was using my meade 16" lightbridge. Over the course of the evening used various eyepieces with the max. being 609X and combined to render this image. On August 2everything seemed to be right. The weather was absolutely great, the Sun was more active than I've seen so far this year and the seeing was above average. A good day to try sketching a full-disk h-alpha sun for the first time instead of an isolated prominence. First I made a blank disk with a soft white pastel. I took the sketch outside and filled in all the details I could see through the eyepiece of my 70mm solar telescope with white and black pastel pencils. All regions were very active, especially the middle one: it changed its shape within minutes. Sometimes little bright flare-like brightenings appeared and disappeared 2 minutes later. A wonderful sight! It took me one hour (from 08.00 UT - 09.00 UT) to complete the drawing. I scanned the (black&white) sketch and gave it a reddish color with Photoshop.

Sketch made from my backyard in Deventer, The Netherlands.

Here's my sketch of NGC 6946 and NGC 6939 in a wide field of view. I've been working on it for almost a month, using every spare minute I have during my observing sessions to record stars in this big field or the colors of individual members as well. There's a few that have been depicted there from what I've taken so far. By the way...I certainly do apologize for the mis-spelled "Las Vegas", as I must have not been paying close attention to my spelling at such a late hour as when I was creating the template. Sketch of M34 open star cluster, which was observed from moderately dark location with 8" newtonian. Usually being a binocular target for me - I realized that cluster is quite striking at moderately sized instrument and a wide field eyepiece (2.2 degrees field of view in this case)

This October New Moon saw me attend for the first time the Ice In Space Astro Camp at Lostock, New South Wales, Australia. The forecast threatened thunderstorms, but as luck would have it, the clouds parted to give us a great view of the sky. Thunderstorms did happen, but we only saw the glow of the flash of lightening from a massive storm system that lay behind a ridge.

My first sketch of the night was of 47 Tuc (NGC 104). This massive globular cluster is considered to be the remnant core of a galaxy long ago swallowed up by our Milky Way. There are two other such galaxy core remnants, Omega Centauri & M2.

The view of 47 Tuc through my 17.5â€ is nothing but astounding. At 125X the whole FOV is filled with countless stars. Its core is very compact and extremely bright, and the reach of the remaining ball of stars is impossible to determine its limits. Transparency was a little lacking, but you take what you get sometimes.

For once I added a FOV ring around the subject. My customary ringless sketch lacked a little something with this one as the field doesnâ€™t extend to the edge of the page, the excessive blank black caused a lack of context. The FOV ring this time I feel gives that context to the sketch with only a small amount of extraneous stars lying just outside the ring.

An interesting comparison is between 47 Tuc and Omega Centauri, the two largest globular clusters in the sky. Omegaâ€™s core is larger in apparent size, while 47â€™s is much more compact and intense. This makes for an easier pick-up of â€˜fingerprintâ€™ patterns within Omega, while these patterns are much more subtle and even fickle in 47 Tuc. Still, these differences make for their distinct & unique qualities.

This was a challenge to sketch faithfully. As most of the stars in this cluster are actually quite faint on their own, it became more of a matter of attempting to lay down an impression of the collective features. The patchy â€˜mini clustersâ€™ around the perimeter, the suggested arcs and lines, and the distinct three â€˜darkâ€™ spots on the core, one of which is more of a bar that lies above two of the spots.

I hope you enjoy this sketch.

After careful plans to observe, photograph and sketch the total lunar Eclipse of Dec 10th 2011 in the Portland city center, fog formed late, so plans to relocate were rushed at the last minutes as we drove fast from the city to the Columbia River Gorge Crown Point Oregon Vista House, yet to find a hundred people, photographers, etc, most were ensconced in their cars with engines running, while Gorge east winds gusted to 60 mph with 25 degrees F.

So I set up my Celestron Nexstar 5i telescope anyway, huddled into the wind-shielded side of the Vista House with a few brave other photographers. I made quick mental notes of the image at medium power through the telescope and began to photograph crudely as the wind buffeted the scope and my Sony NEX5 camera poised high and teetering on its tripod over the telescope eyepiece. I made a few photographs for reference and some visual mental observations and notes were taken. I have possibly observed over two dozen total eclipses to date since my mid teens years; photographing perhaps a dozen of those events but this was the first sketch. I noted the very slight turquoise-blue fringe on the sunlit edge just after totality, as they predicted and rendered it slightly to the sketch.

Much in post preparation was then later made in the past week at home to produce this accurate large technical documentary dry pastel sketch onto 19" X 25" black Strathmore pastel paper completed today, December 19th 2011. As the foreground ambience seemed as partly visual and incidental to the whole scene, I decided to add in the nostalgic gas street lamps that slightly reflected the Vista House behind, also slightly showing the moons image on its windows and the streetlight lantern glass, causing several repeated reverse reflections. I made this pastel sketch of crater Copernicus from my backyard in Deventer, The Netherlands. It was very cold (15,8F) but the seeing was pretty good. I observed from 18.00UT till 19.00UT. Sketch is made with white pastel on black paper. The telescope I used was my old 3" f/16 Polarex/Unitron refractor.

cloudbuster
Double Cluster
Equipment - 10" dobsonian on a tracking platform with Pentax xw 20mm eyepiece, giving a 60x magnification and 1.17° field of view.
The cluster was sketched during two nights on August 23/24 in a total of 5,5 hrs from my yellow zone in Almere (The Netherlands).
I used 4 black fine liners of different size on white paper and digitally polished some of the brighter stars while giving six others their red color.
This is the original (inverted) field sketch. 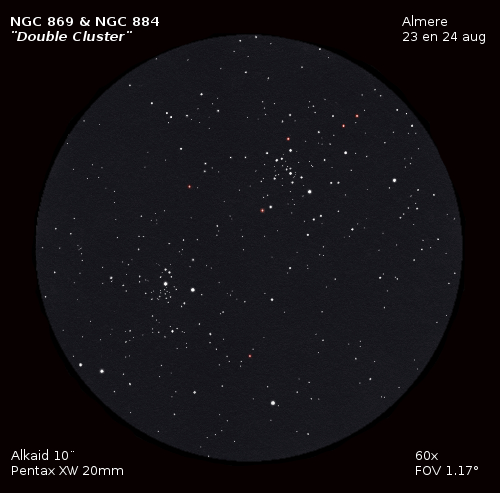 The sketch was made on the 25th of August at around 21:35UTC (time to complete was probably around 2 hours). The location was Pejo in the Italian Dolomites at an elevation of 2000m and a stunning SQM of 21.5. I used my 18" f/5 Otte BinoDob with a couple of 22mm Naglers (104x) and Baader OIII filters, sketching with normal pencil on white paper and then inverting and elaborating the sketch on the PC. 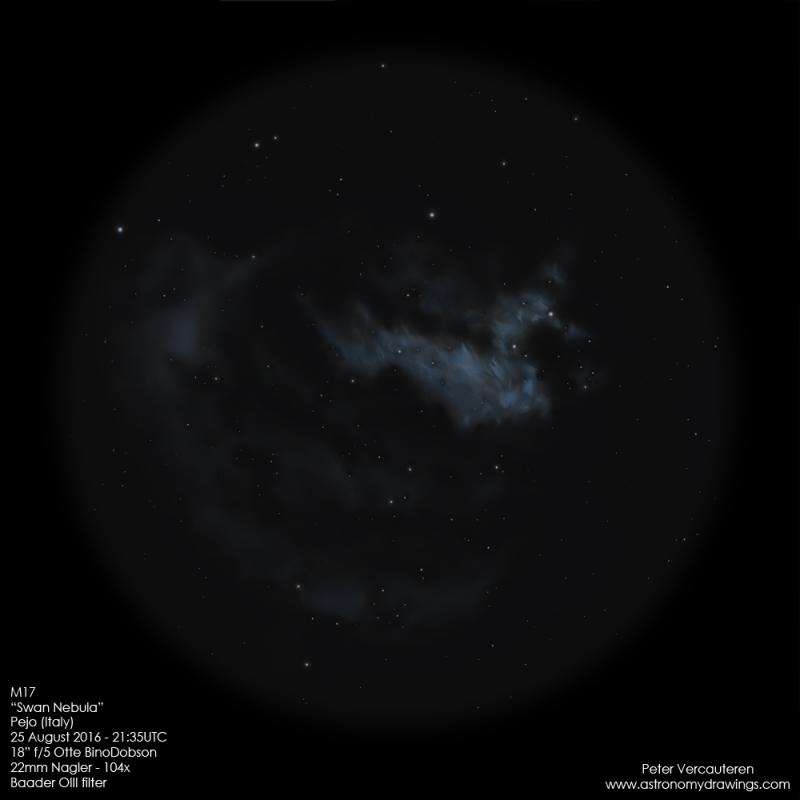 I would like to take part with my sketch of M24 cloud, in Sagittarius. I used my 22x100 binoculars and it took me about an hour to make the whole sketch (then a bit more to edit with Gimp2), with black pencil over white paper. 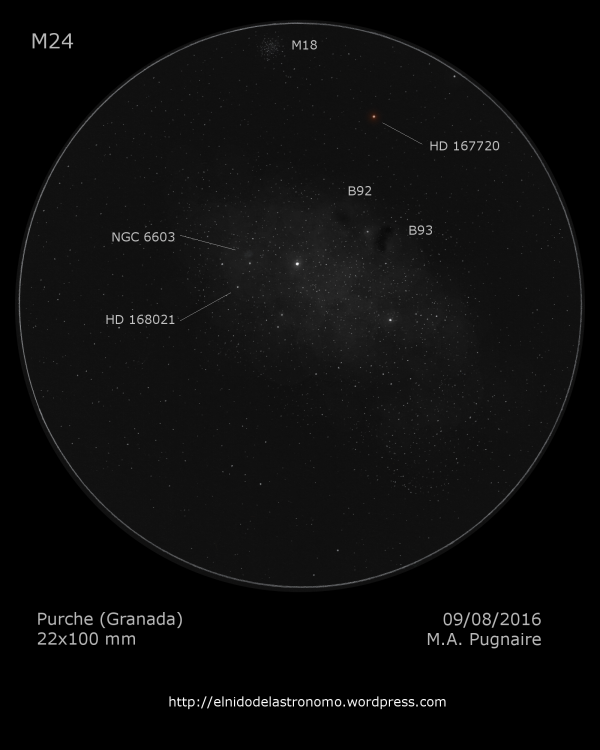 Here is the sketch of Plato on the waning moon that I did on November 22nd from Sarasota Florida.  I used a Skywatcher 90mm Mak-Cass with a Televue 9mm lens.  The sketch was done on Artagain black sketch paper, Conte white and black pastel crayons and pencils and some white charcoal.  I used a cell phone camera and then created the black oval mask using Gimp.  I am posting the labelled version of this sketch.  The labels were also added using Gimp.  What a sight!  Unfortunately the next two nights/ mornings were clouded out or I would have done more early morning observing. 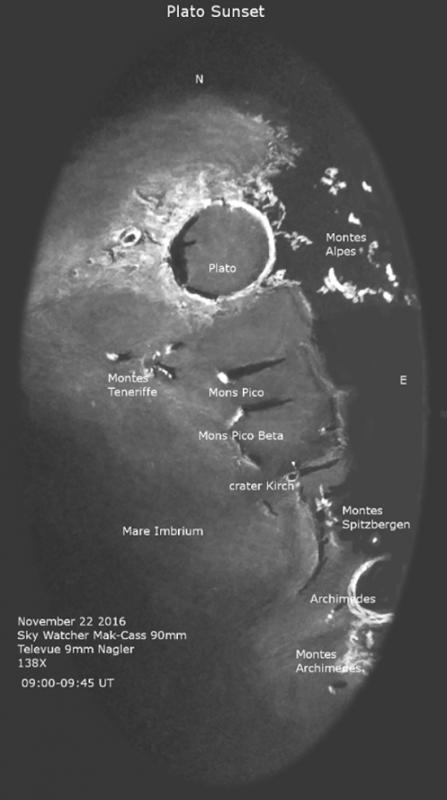 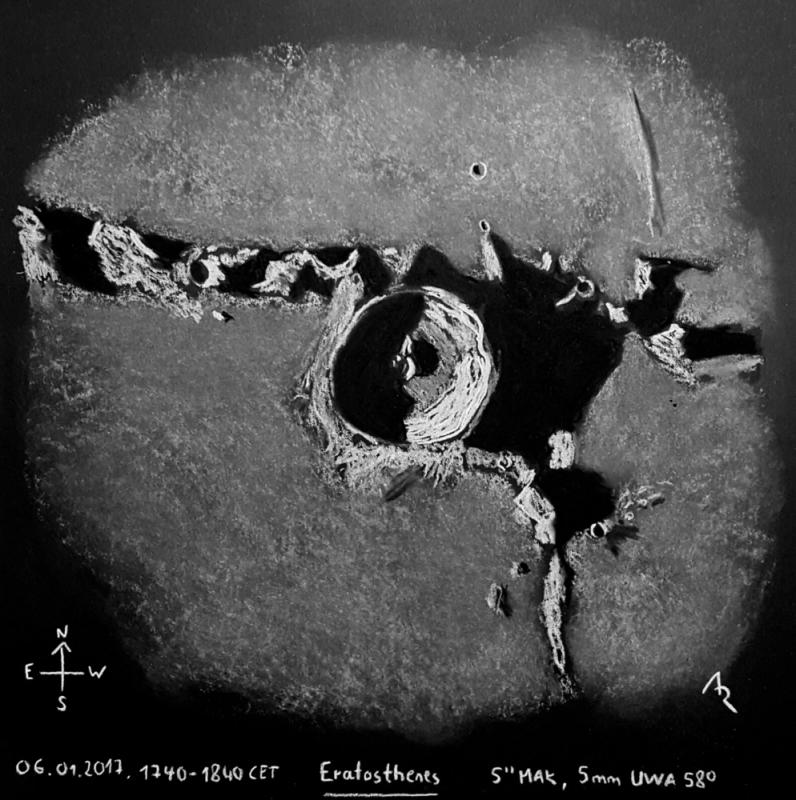 Eratosthenes is about 58km in diameter and is located at the western end of the Apennines. On the sketch you can see as well the western rim of the low crater Stadius (SE of Eratosthenes) and the craters Eratosthenes C and Wolff B. 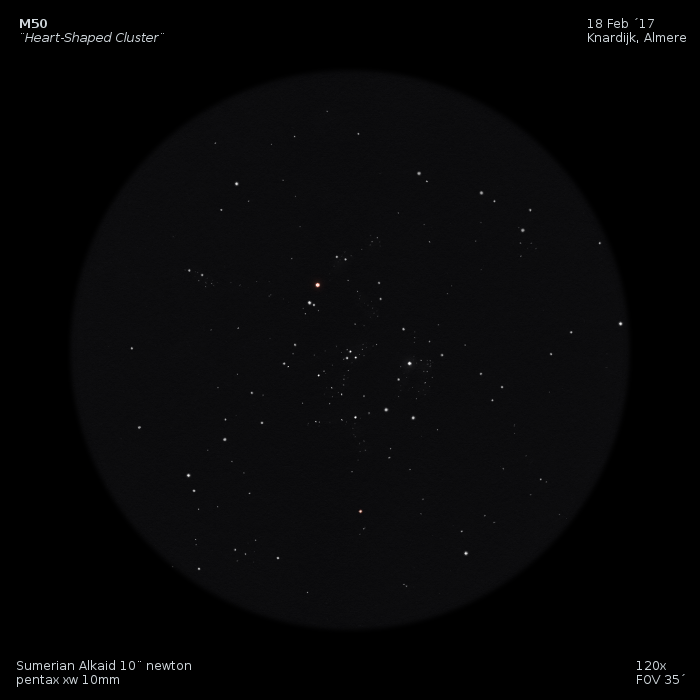 It was sketched at my semi-dark site 15 minutes from home and it took me some 2,5 hrs at the eyepiece. Afterwards, the sketch was inverted and digitally enhanced in GIMP2.

I used a 10" newton on a tracking platform with 10mm eyepiece, giving a 120x magnification and 35' FOV. Materials used are a set of black fineliners and a 2H pencil on white paper.