A pair of RAO 50/500 scopes with different mounts.  Th EQ is really neat, but the geared alt-az is much easier to use.

I had a second SkyRover that was labelled RAO and is now in the hands of a great CN'er.

I have one of those!  It was my first scope, too.

Sunspots through Baader film with the Unitron 105.  This was five years ago when there were sunspots.

And the Transit of Mercury through the same scope.

I have several including a really unusual Zeiss in wood case with beautiful eyepiece turret and a Nikon with a truly wonderful lens. I'll post photos later.

Great idea for a thread Rolo!

I was going to post in this last night, but needed sleep. (and some 'mo better pictures)

All 3 of my 50mm's are finderscopes (technically still a telescope though...

) and I can see some faint fuzzies with 'em on darker nights. Never really kept track of what... just used 'em for findin' things. I need to do some better observations with them.

Celestron (Vixen) 8x50 Convertible Right angle. I bought this as New-Old Stock, and it's very nice, comes with an extension tube for straight-through viewing.... rear helical focuser takes965 Accessories. The diagonal is a very fine Japan made Prism. Air spaced objective. Just for fun one time I used my 6mm Pentax Ortho with it.... dim, but stars were reasonably sharp. The supplied eyepiece has very thin wire crosshairs, and sometimes in my relatively dark skies.... I have a heck of a time seeing them.

Tried to use 1.25 stuff with it, but that was a no-go due to lack of focus travel - in case anyone wonders. 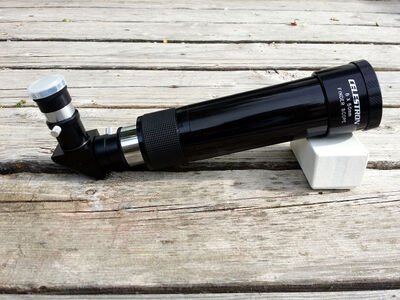 Continuing on to Finder #2:

I also have a thread here in the classic's trying to find the Maker of this guy.

I bought this little guy from Joe (aka) Starbird here on CN classifieds, around a week or two ago. Honestly - (and some might find this controversial- but) I was looking for some parts for my ATM 50mm finder, but it was soon realized that this is no ordinary Finder..... as I was informed by Joe, this is a straight-through but also correct image. Noting that, we discussed things.... and I decided knowing that feature, and however odd it may be -  it would not get hacked for parts and I would be thrilled to use it as-is.

And, I really do like the Correct-Image after using it a few times. No more mental gymnastics with my charts or tablet view. Stars are sharp and bright (caught 3 of Jupiter's moons a few evenings ago) This will be a handy daytime monocular also.... very cool! No, it's not getting hacked.... nor is it for sale.

Even with only being able to use it a handful of nights, I can already tell that this will probably become my most used finderscope in the lot.

And the reticle is illuminated and similar to the older Celestron 8X50 Polaris Finderscope that was seen on the C8's. That will help a great deal in my darker skies.

Oh, and I Borrowed the illuminator from my old Meade 12mm Astrometric EP and it fits perfect. Sweet!

And a Big Thumbs Up to Joe. Great dude btw! 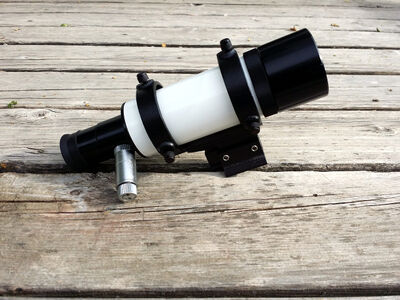 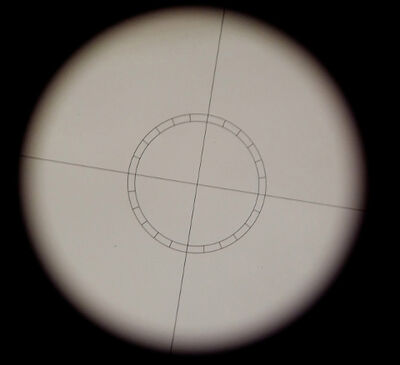 This project started - partly because I liked the Celestron 8x50 so much, I wanted to try to build something similar.... but one that could use more modern 1.25 eyepieces, and also be RACI.

Using a similar tube, I used an old 50mm objective lens from a broken set of Tasco bino's that I had in my junk box. Once tube length was figured out... I cut it, and had a 2" to 1.25" visual back turned down to fit the I.D. of the tube. I figured this would work fairly well...and it did to a point. Higher power ep's showed that the bino objective was no bueno, with very comet-like stars as magnification increased. Back to the drawing board I went, and dug out the original air-spaced objective that had a small clamchip.

No worries, I'll just roll with it.

Since I originally JB welded the visual back in, the tube was again cut. Now using a 48mm to T-thread adapter, and some filing... and some more JB weld I was back in business. (sorry- forgot to take pics of that process)

Since the original objective had a longer F/L, I can simply use varying lengths of T-thread spacers and not run out of focus (to an extent)

This whole project is not complete... but pretty close. Diagonal is a AMICI WO unit with helical focus.

Now it's razor sharp from 26mm down to 6mm. There is a very slight spike from the AMICI prism, but it's very dim... and I don't mind.

Sure - I could have just bought a RACI one, but what's the fun in that?!

(there is also an ocular Sasquatch in this photo)

A few pics of when I started messin' around with it - until today. 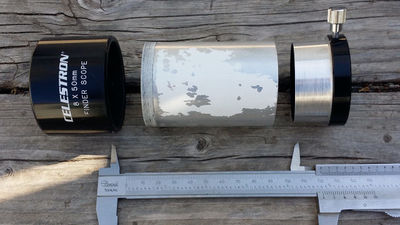 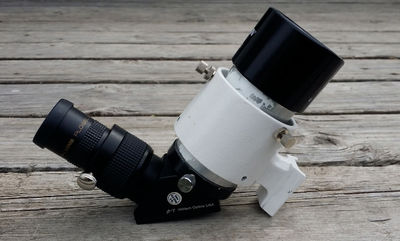 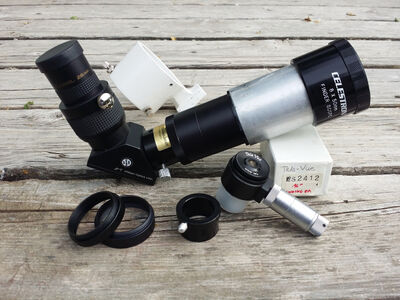 Of course he’s staring at the sun with it.

I have done some observing with telescopes in that size range ... here are links to my web site:

They don't get much smaller than this little tike...the 6.5 x 30 Tecnar (Swift) Satellite Telescope.  I've only had it out once, but it gave reasonably nice star images for what it is.

I have a little Swift 838. Purchased it from another CN'r, Chuck Faranda. Great guy.

I've only had it out a time or two. I'm hoping that the elements are out of order or flipped. The performance was a little underwhelming. I know that is completely contrary to their rep, so I'm sure that there is something that needs addressed.

This thread motivated me to look into it again. So, it's set up in the family room for use tonight. 😊

I'm still amazed when I think back on the Tasco 4vte I got for Christmas when I was 6 or 7.  I used that thing pretty brutally.  Took it apart and put it back together so many times that the threads on the tube were stripped.  Gave it away around 1980.

Then found a mint version in the same original box on ebay many years ago.  I think I paid $20 for it.  I've only used it one evening, to set it on a table and look at Jupiter with it.  I was surprised how sharp it was.  Still have it, but keep it for sentimental reasons but don't use it.

Then there's the Asahi that I picked up at the swap meet for $2.  needed penetrating oil and some advice and wood clamps from Chuck to get it apart for cleaning.  Very sharp optics.

Then, I have this odd Goto - I think 40 or 50mm - that's on a stand looking like a satellite tracker scope.  There's some missing gizmo on the side of the focuser assembly that I've never figured out what was there.  I'll have to dig for photos of it.  I posted about it years ago, but got no replies as to what it was.

There sure are a bunch of pretty little scopes here, thanks for posting all the photos!! 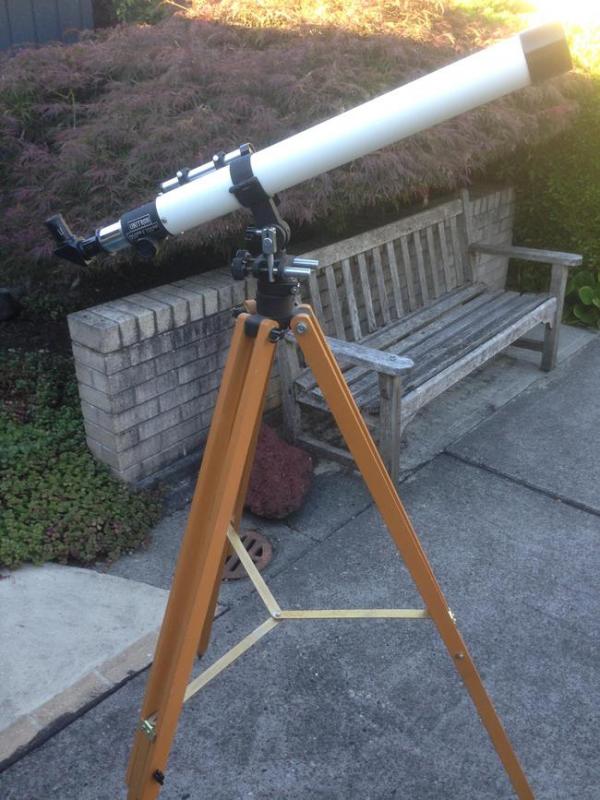 Lunita, my Unitron 105. I love her so. Exclusively for Lunar observation, sometimes a planet or two. 50mm f/14. Now this is a long achro for an old guy--one handed set-up!

I would like to keep this topic on 50mm or smaller refractors and 3" or smaller Newtonians and Maks.I've only had a couple of tiny classics like the Tak FC50(which I still own), Meade's 50mm x 600mm model 155 and that Tal 65mm Newtonian.

What type of observations have you done with yours? Lunar, planetary deep space? My little FC50 surprises me every time I use it (which isn't much). With some patience and careful observing I have seen considerable detail on Jupiter including the GRS. The moon goes without saying, tons of detail there and some of the brighter M objects from my light polluted skies. Have you ever taken yours to a dark site?

That 50 TAK would be welcome at my house any day!


Is the jury still out, or did they come back with a verdict of, "Guilty of being optically awesome."?

one of my favorite little scopes. What a wide field it covers also. 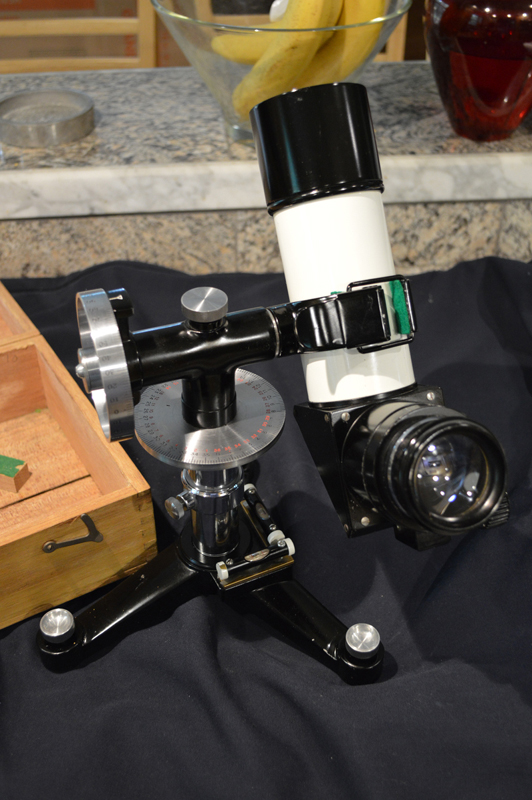 The smallest Bushnell in blue & silver, the Observer.  Optics are very good for a spotter.

Another fine 30x40 spotter with very nice optics.  Jupiter from 1956.  Pay no attention to the guy on baritone saxophone in the photo.

ROLO!!!  As mentioned, my Swift 838 was underwhelming.  Thanks to your thread I was motivated to fiddle with it today.  Boy!!!  I am glad I did.  The elements WERE flipped, so an EASY fix.  Well, not as easy as I hoped, because I knocked the spacers off, and nearly lost one.  I had a to "tri-sect" a circle to properly place them again, but it was worth it.  The Newton Rings were centered, but not perfectly.  Still such an amazing change.

I have been missing out.  Such a tiny scope, but big performance.  I am actually pretty shocked and impressed.  It took 175x on Jupiter AND Saturn.  Saturn was really low, but it still looked outstanding, especially considering the "tiny classic".

I would have eventually gotten around to it, but this thread definitely set me ahead.

So, what I have observed, is the moon, Jupiter, and Saturn.  I spent a few minutes on an orangish star just a click or two down and over to the west of Jupiter.  Nice tight pin-point, and both sides of focus looked identical.  Looking forward to more.

Here are a few pictures of the scope, mount, and tripod.  Not sure if the paint on the mount is original, and/or if the legs/hardware are either.  The paint on the hub and CW look a little suspect to me.  The OTA itself is in pretty nice shape.  Probably should re-grease the focuser, but everything is pretty smooth as it is.  It was definitely nice tonight.

Do I see Bushnell or Shrine Manon, RAO, Unitron x 2, another RAO, SPI, more Bushnells that are flying low, TAL, Tasco, and Monolux?