Update: India's Chandrayaan 2 mission to the Moon was expected to launch today this 14 July, 2019, however, 56 minutes into the launch countdown, a technical snag in the fuel conductor was reported. So, for now, the countdown is on hold. ISRO are reporting that a future launch date will be announced, so if you'd like to stay up-to-date, there is an ISRO Twitter link.

While ISRO isn't giving much to the public about the problem that delayed the launch, the next launch attempt will be this Monday 22 July, 2019 at 2.43 pm IST. There is another launch window at the end of July 29/30, 2019, and also another window in September 2019.

India's Chandrayaan 2 lunar mission to the Moon has successfully launched today, 22 July 2019 (at 0913 GMT) from its space centre in Sriharikota, near the Bay of Bengal.

Already having separated from its launcher's second stage and now in Earth orbit, Chandrayaan 2 is expected to touchdown somewhere within the near region of the lunar South Pole some time in early September 2019.

The mission includes both a lander and rover (also with an orbiter overhead), and all three include various research instruments (13 of Indian, 1 of NASA) used in areas, for example: looking for water and minerals signatures, and the study of moonquakes and possible future landing sites...amongst other activities. The orbiter has eight instruments onboard, the lander with four (including the NASA instrument), while the rover has the remaining two.

On touchdown, the solar-powered rover will off-load from the lander after some four hours or so, where it will then mainly rove around the surface during lunar day-long (14 earth days) stints. Note, just like the Chang'e 4 rover setup, the Chandrayaan 2 rover (named as Pragyan) might have to power-down for a couple of earth days (temperature purchases on the electronics), during when the high sun is overhead. However, given that its location is in the far 70-degrees south on the lunar surface, perhaps, such power-down options can be shortened? 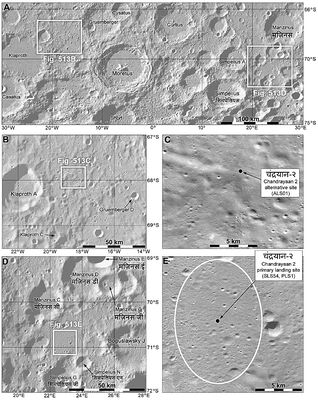 this is good news

It'll be awesome to see what new pictures they come up with from the south pole. I wonder how illuminated is the pole in terms of solar power for the rover (I'm assuming the rover is solar powered, please correct me if incorrect).

Thanks, Gustav...and congratulations on the new Moderator position.

Yes, the rover, as well as the lander, are solar-powered, and you're correct, illumination of such will slightly be shorter given their expected southern -70.00 degrees location. I'd expect (and don't quote me on this) that the ISRO engineers have inputted this into their equations/code and onboard electronics.

The long, lunar day (14 earth days) stints that the Chandrayaan 2 rover (Pragyan) is expected to undergo near/below the 70.0s degree South Pole environment, will be different. The southerly periodic lighting conditions, let alone the temperatures changes, may affect the amount of days that the rover can rove (the various powering down/up periods might be shorter due to less illumination on the solar panels, but then, that said, will the slight temperature changes involved during such shorter periods, allow longer day explorations).

A milestone: the fourth orbit-raising manoeuvre of Chandrayaan 2 occurred today, 2 August 2019, where in the next few days, 6 August, it will finally go to the Moon. 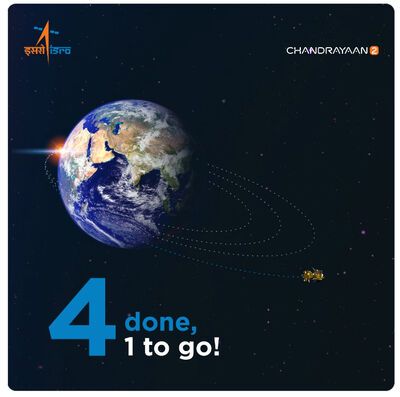 Below, some earth views taken by Chandrayaan 2 on the 3 August 2019. As the spacecraft's trans-lunar injection (Wikipedia explanation) is expected to occur on 14 August, 2019, I suspect the views will be quite different...some moon shots, hopefully will follow over the then next few days, if cameras are pointing in that direction. 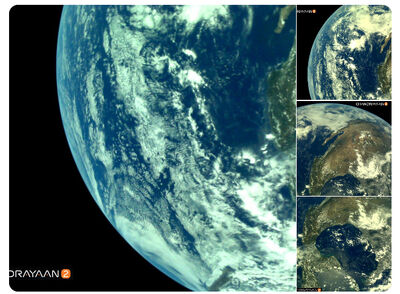 Chandrayann 2 will now begin further orbital manoeuvres; preparing it particularly above the south pole region of the Moon (some 100 km above the lunar surface), for landing on the lunar surface sometime in early September 2019 (Sept 6 to 8). A rover attached to the lander will then separate hours later - assuming all goes well.

Below, Chadrayaan-2's first shot of the lunar surface of the Farside...looks very nice indeed (that's the Orientale Basin to the top right). 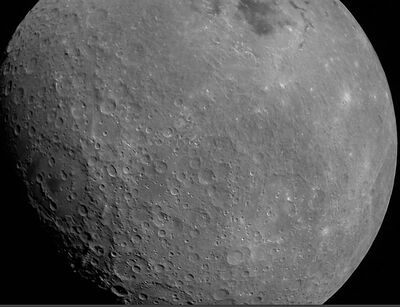 Below, Chadrayaan-2's first shot of the lunar surface of the Farside...looks very nice indeed (that's the Orientale Basin to the top right).

Thanks, highfnum...and you're correct as it was the fifth and final orbit manoeuvre that occurred at 18:21 India Standard Time Sept 2019; achieving an 119 km x 127 km orbit around the Moon.

Today, 2 Sept, 2019, separation of Vikram (with the Pragyan Rover onboard) from the Chandrayaan-2 Orbiter was a success. The rest of manoeuvres up to 7 Sept, as you mention, will, hopefully, be history for India (and the World).

Below, the lighting conditions of the Simpelius-Manzinus region (Simpelius N and Manzinus C are approximately at centre), where, fingers crossed, all will go well with the landing operations to occur tomorrow, 6 Sept, 2019, round 6.0 pm UTC. Note, locations and times may vary significantly over the intervening period, so take all of the above as hearsay, not, official.

Anyone watching the live stream

Yeah, watched it live....but it looks like something went wrong during the 'fine-braking' phase at altitude 2.1 km. Hopefully, the orbiter will return some further data...in the near future.

as of this moment does not look good

Didn't see the stream. What happened?