signal lost about 2km above surface

Being that close to the Pole, I'd suspect that LRO will be imaging the site soon enough. And the spacecraft had telemetry up to the end.

"A steeper inclination than the planned trajectory indicates some failure propulsion along without a downlink signal. I am afraid that Vikram has not landed as planned, softly. The last info from the panel was that its altitude was 1 km above the surface at 59 m/s (an acceptable landing speed must not be greater than 15 m/s)."

A disappointing result to be sure.  As Bill indicates above, the problems appear to extend beyond a simple loss of communication, with the final trajectory of the spacecraft deviating from the programmed decent plan before the loss of communication.  On the one hand, this highlights the difficulty of pulling this type of mission off, but on the other hand, it seems like these sorts of problems are exactly the sort that would be worked out during years of extensive ground testing of the propulsion system, and performing actual computer controlled landings at a test site.

The Moon is a harsh Mistress. Look at the number of kerfuffles we (and others) have had getting to just the Moon.

India Just Found Its Lost Vikram Lander on the Moon, Still No Signal

India is a poor country do they need such space programs.

ISRO says the Lander is tilted on the surface, which means if the Antennas aren't in a good position to point at the Orbiter (orbiting overhead) or at the Ground Station on Earth, communications won't be possible. Still, the Orbiter is there with several scientific instruments onboard; including a super camera for imaging the surface. So, if the Lander doesn't work in the end, the Chandrayaan-2 mission isn't over yet. View of the Lander on the surface taken by the Orbiter camera is due to be released soon (one can't blame ISRO for not releasing them sooner than expected, as one never knows what might be pulled out of the lunar, lander exploration bag).

Below, an update from the Dwingeloo radioscopes (in Holland, where I've visited...simply superb), showing the approximate line-of-sight velocities during the descent of the Lander, at the last stages.

As is usual, such charts can be confusing, however, note on the left the vertical line-of-sight of the actual Lander in metres per seconds (allowing us to view the velocity changes of the Lander over time), the progressing horizontal time at bottom (in increments of 0.5 sec intervals), the 'peak' point where the Lander follows an expected decrease in velocity towards the surface.

However, note the unusual 'squiggle' near approaching the 20:20 time mark (bottom right), where signal loss occurred. That 'squiggle' data is what it is all about, of what occurred at that point. 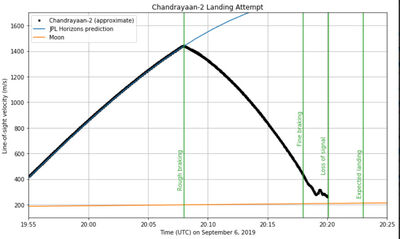 I've heard that it did land "incognito". We'll see what develops on this saga.

They did not released photo taken by orbiter can not believe simply without proof.

I'll assume, Suryaputhra...they will eventually release it. Btw, the image is of a thermal type, so it won't be like your average, photo-type one that we're all used to viewing through the likes of, say, LRO (unless, they release a view from their normal, visual camera in the meantime).

And mentioning LRO, it will be in an approximate position over the impact?/hard-landing? site round 17 Sept, 2019, so hopefully, they might get a shot of it in before ISRO releases theirs. But timing is essential, as the terminator is closing in on the site: below, a rough animation from 12:00 noon UTC on the 17th Sept to 12:00 noon UTC on the 18th, so LRO will need to be on the mark (note, librational effects have been removed, simply for visualization). The below area will be in better sunlight views over the following months, so, you never know if LRO will wait (let alone the Chanrayaan-2 Orbiter) to take shots then.

The site, if indeed that is the actual site, is approximately at centre of animation...at Manzinus D.

Latest news: The Vikram Lander is in one piece, not in pieces, non-communicable, but not on its four legs, while tilted (lying on its side). No worries, as this part of the mission was just to last some 14 earth days (half a lunar day) anyways, so the Orbiter part of the mission will now take precedence. 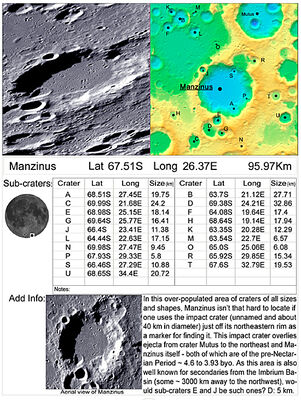 A YouTube video explaining what happened during the Chandrayaan landing sequence.  No "Official" information yet.

Approaching lunar night-time within the next few days (posted 17 Sept 2019), any communication of the Vikram Lander will eventually decrease, as it doesn't have heater units to counteract the extreme temperature (minus-150 to minus 180-degrees Celsius) changes on the lunar surface.

In effect, the exploration surface part of Chandrayaan-2 is over, while the Orbiter is still open to surprise: to produce images of the impact/hard-landing site, and then other areas of interest totally un-related.

I had heard that LROC was going to be in position to image the Vikram arrival site on 16 Sept '19, but I've not seen anything yet, even at the LROC website. I'm sure we'll see something online this week.

As John says, the Sun is setting at this polar site, and we won't see anything til Sunrise in 14 days.

"As scheduled, NASA’s Lunar Reconnaissance Orbiter Camera (LROC) on Sept. 17  imaged the intended lunar south pole landing site for India’s Chandrayaan-2 Vikram lander, but long shadows in the area may be obscuring the silent lunar explorer. It was near dusk as the region prepares to transition from a two-week lunar day to and equally long lunar night, so shadows covered much of the region and Vikram may not be in the LROC’s field of view, NASA said Sept. ..."

The landing site seems to be between Manzinus C and Simpelius N, as identified here (YouTube link).

Below, just a broader view perspective of the site (just to give one's bearings).

Thank you-- that puts what is known into perspective.

Sorry, Suryaputhra...can't offer anything new at my end.

Below 1: an update on the possible Vikram site (thanks again, to Phil Stooke).

Below 2: yes, time t pull out those goggles. 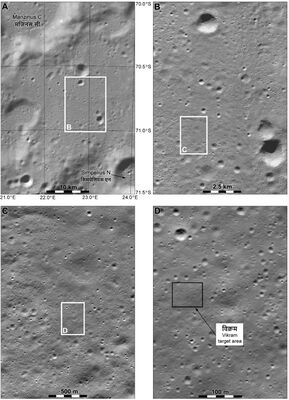 Using the blink-comparator technique in comparing LROC images (before and after) of the possible Vikram impact (rectangle) site, the below 'U-like' feature showed up just southwest of it. Second image shows a much higher rez view (it looks a bit busy, so perhaps small craters and undulations might be responsible for the U-like effect).
John Moore

John, that is incredibly diligent. I used the oldold-fashioned "look for something different/mangled" and was getting googley-eyed!
I like the blink comparator approach. You may have found something, but I wonder if it isn't an artifact of the lighting direction being 90deg different on the two photos?
Good work.