Has anyone Protostar flocked the inside of their C11 OTA?

Has anyone used Protostar Flockboard non-adhesive flocking to flock the inside of their C11 tubes?  If so did you go with one continuous sheet or two sheets?  Any noticeable difference in contrast, background sky darkness or scatter seen at the eyepiece vs stock?

I may be removing the corrector to clean it and service my secondary housing and thought it would be an ideal time to flock it if there is a tangible benefit.  I don't plan to touch the central baffle, only flock the inside of the tube. My tube is carbon fiber so I wonder if cool down will be affected with the flockboard in place vs stock CF.

Thoughts, recommendations or experiences are all welcome.

I’m very wary of scopes that are not in original condition - I have seen scopes that have been futzed with, the result being frankly worse, not better, despite the intentions of the person who did it.

Secondly IMHO flocking the inside of an OTA is a misguided fad that won’t achieve much. For starters it assumes stray light reaching the focal plane is coming from the walls, which is unlikely and can be demonstrated by pointing the scope at the moon and looking inside the corrector at what parts are brightly lit. These will be the end of the central baffle, and the secondary mirror cell and baffle.

If you are really determined to futz with these a coat of Black 3.0 will be better and more easily applied than flocking.

Lastly it ignores an effective alternative solution - adding a decent dewcap, which provers an effective baffle against stray light - without modifying or opening the OTA.

1) Use a flocked dew shield. It blocks stray light from entering your scope, and keeps dew at bay for a while. This is a mandatory step for all SCT owners.

2) Flock your primary baffle tube, but only if it appears shiny when looking up it from the bottom of your scope. Some people claim good results from this, though I can't remember C11 owners complaining about shiny baffle tubes. Complaints usually center on 6" and smaller SCTs and Maks.

I did.  The good news: it looks really cool when you're done.  The OTA looks really black and mirror looks like it's floating in a void.  The bad news: it doesn't really help with contrast.  Of course, that could also be good news in that it means that Celestron designed the baffles correctly.  One other thing to consider, is to flock the inside of the primary baffle.  First, double check that the ID of the primary baffle with the flocking won't be smaller than the field stop of your longest/ widest eye piece, otherwise you'll introduce vignetting.

Flocking the inside of the baffle may result in the flocking constructing the light cone to the eyepiece, which is bad as this also causes diffraction and scattering. Have seen this with a couple of maks where it had to be removed for this reason.

A coat of Black 3.0 has negligible thickness and is just as effective.

Good feedback from everyone thank you.  I currently have a flocked dew shield which may be enough. BTW, the protostar flockboard isn't difficult to install based on the videos and its worlds easier than painting the insides which is a mess I would certainly want to avoid.  It is a roll without adhesive under tension that then just expands into place like a tightly rolled up magazine would open up on its own.  The only thing that might be an issue for a flush fit are some of the screws that protrude into the tube which i might have to make holes for complicating the install a bit. Hmmm...

I've used protostar flocking (the self adhesive type but not with the backing peeled off) to flock the central baffle of my C90 and SW127 MCT's when I had them.  The difference with the C90 was huge as it had a very shiny inner baffle which resulted in all sorts of horrible reflections on bright stars. The SW127 wasn't as improved as its central baffle wasn't nearly as shiny from the factory.  I don't think the C11's central baffle needs flocking based on looking through it but perhaps flocking that in conjunction with the flocked dew shield together would be a good alternative.

I’m very wary of scopes that are not in original condition - I have seen scopes that have been futzed with, the result being frankly worse, not better, despite the intentions of the person who did it.

I too would never buy a used SCT that had been flocked, as you never know if the scope had been put back together properly.

interesting comments on being concerned if the OTA has been put back together correctly.  Are you all that concerned there are that many hacks out there not knowing what they are doing?

Yes have seen a few.

A genuine upgrade like the focusser I put on mine is fair enough when done properly - and still have the original parts.

But to see a nice premium scope hacked in some way that actually makes it worse, not better, is not uncommon.

What’s even sadder is permanent damage to the optics such as chips, scratches and sleeks on primary / secondary mirrors and correctors through careless handling, or the optics are mis-rotated, or worse, have been badly strained by some hamfisted type not knowing how to assemble it correctly.

Then there are things like cats where someone has disassembled the focussing parts but failed to reassemble it correctly and left a part out, or even broken it.

Or cats where the central baffle is distorted or bent because someone has tried to get it off and failed.

Or the primary is misaligned so badly i can only guess the scope was dropped.

Many issues may not be evident without the opportunity to see the scope and try it.

Even simple things like the cosmetic condition speak volumes about the care or lack of it - dents in the tube, broken screws, screwheads that have been hopelessly burred, things bent or dropped.

There are quite a few aspects

I've not flocked my C11, but I did make a dew shield out of foam rubber that is quite long. Not only does it work great as a dew shield but it also keeps stray light away from the corrector.

When I use the dew shield I can see a marked increase in contrast. Cost about $8 in materials and an afternoon of my time cutting and gluing.

Before flocking you might try this and see if it helps. Of course, YMMV. Good luck. 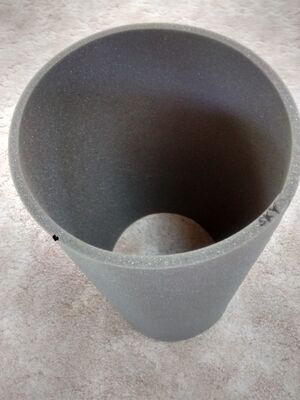 
Also tagged with one or more of these keywords: SCT, catadioptric, cassegrain, Celestron, DIY, observing, optics