I'm really enjoying the use of binocular telescopes and have recently started using some higher magnifications just for grins. These are being used in a light polluted driveway.

The little 80mm asymmetrical will do 67X well, the 127mm asymmetrical has been up to 117X so far. Last night I was out with the RB-66 at 275X. Saturn, Jupiter and the Double Double were very cool. All this is with cheap eyepieces so I'll soon be looking for some good options in the 3-4mm range. I've got a BH 24-8 zoom with 2.25 Barlow and the smartest thing might just be to pick up a second. If you know some good pairs please recommend them.

My next build was going to be another asymmetrical using two 102ED F/7.5 objectives but after last night I may go to a 10" F/6 reflector bino and then later do an 80mm ED or APO as a companion. The 80mm would have the portability and be great for widefield and might occasionally let me get up near 200X. It is going to have to really handy though to push the RB-66 out of the line up. Going from 31X at 2.1 degrees to 275X is nothing to complain about.

I have no optical experience and do pretty much everything by intuition, trial and error with strong emphasis on the third component. I'd be happy to benefit from the knowledge of those with pertinent experience, theoretical or practical.

The only way I have found so far to merge the image in a binocular telescope is to have the two individual fields of view be asymmetrical. For example once I've aligned the scopes to merge the image Polaris appears about 10' right of center in left tube's FOV and about 10' left of center in the right tube's FOV. This seems to be reasonably consistent in the three binoscopes I have access to. This is accomplished in each scope by slightly converging the physical axis of two individually collimated tubes. I just point the two tubes in slightly. Using this method I've been able to achieve comfortable merging from 13X up to 275X so far.

The result is often, but not always, an apparent field stop that looks like the old TV rendition of someone looking through binoculars, a figure 8 on its side, sometimes wider, sometimes narrower. It works but if there is a way to improve my optical train I'm all ears.

Initially I thought I just need to get Polaris centered in both tubes and stick my eyes to the eyepieces to see a merged image. For most people this probably is all there is to it. The more I thought about it though it occurred to me that to get a star in the same place in the two fields of view and have the small degree of convergence of the two lines of sight I seem to need would require the eyepieces to be separated by some huge distance. Even a small fraction of a degree at near infinity is a long distance. So a permanent fix may not be in the cards. Easy adjustability and an elongated field stop may be the best solution. I'm hoping someone can tell me I'm wrong, not a new experience for me.

I don't think this would be an issue for most people. I suspect I have optical or neural issue. My wife would definitely go with some form of brain defect but in my defense my right eye has always been significantly weaker. I notice I tend to rotate or tilt my head so the stronger left eye is forward and/or higher. Every thing I see includes the left side of my nose. At any rate I struggle with merging. I've recently read a little about adult strabismus, whether real or quackery I can not say. Back in my non politically correct youth they just told me I had lazy eye which seemed of a piece with the rest of me.

I do want to say even if there is no better solution the results I get now are still wonderful.

Thanks in advance for any thoughts and for any eyepiece recommendations.

not sure I can help. I use an ED 120 BT by Binoptic, and a Lomo 80 BT, also by Binoptic. At higher mags I have to adjust the mirrors a little bit to get perfect merging...

But there are surely some experts out... 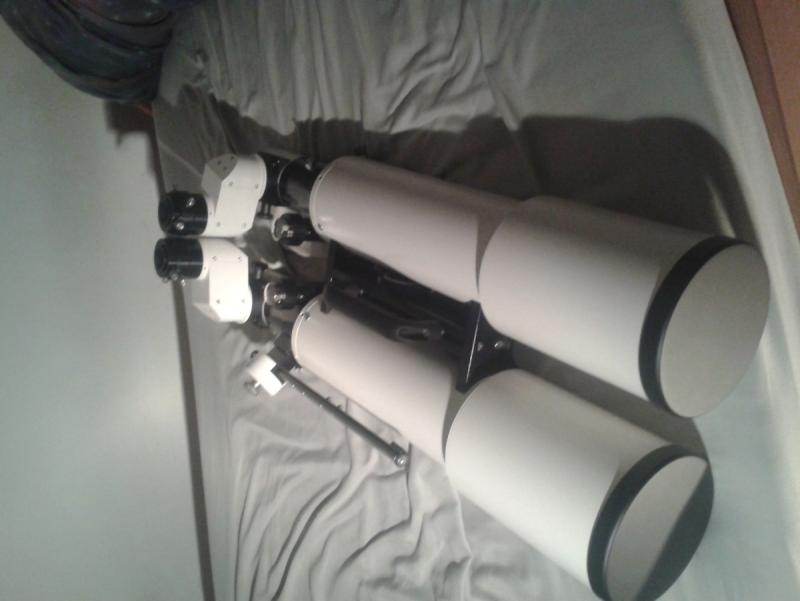 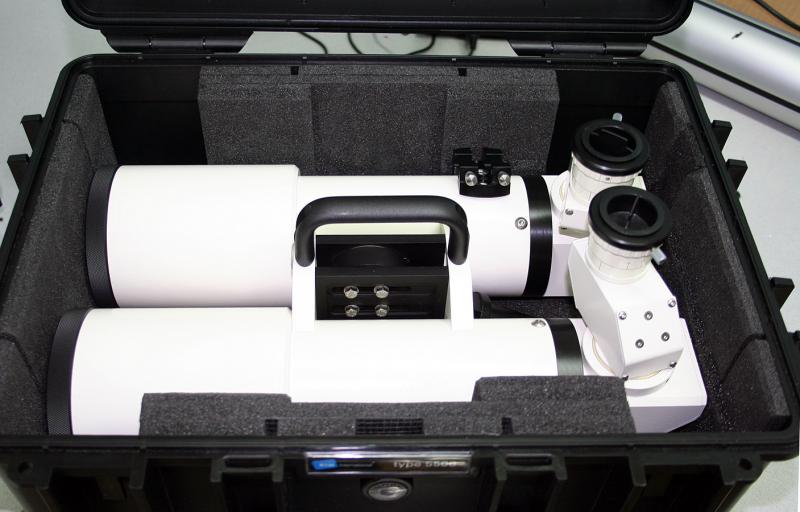 Discussed many times.....physical differences in people being able to achieve comfortable binocular vision.

Some people just cannot use binoculars......

I myself had a "lazy eye"; I trained myself by using an eye patch over the dominate eye and "forcing" the weak eye to take over.

The whole eye/mind chain (visual field) is an amazing process that those blessed with no issues take for granted.

Where are the adjustment screws? Are they on the first, second or third mirror or some combination? I can't tell from the pictures. After you adjust the mirrors to merge at high mags is the field of view identical in each eyepiece? For instance if you have a star centered in one eyepiece is it centered in the other? Thanks for the information.

Interesting. I'd be willing to give it a try. I'm considering an eye patch anyway to allow me to leave my unused eye open when observing mono. I sometimes leave it open anyway, I find having both eyes open much more relaxing.

Not while observing....used eyepatch during normal daytime.

The result is often, but not always, an apparent field stop that looks like the old TV rendition of someone looking through binoculars, a figure 8 on its side, sometimes wider, sometimes narrower. It works but if there is a way to improve my optical train I'm all ears.

Be sure you have set the interpupillary distance (ipd) correctly, I know this from my own experience with my APM 100 ED APO binocular telescope when it was (on one evening) quite difficult to merge the two images at high magnification, ipd was moved...

Sorry for the confusing post. I just meant I could use the eye patch for double duty. First as a training aid as you intended during normal daylight activities. Second I find it more comfortable to leave both eyes open even when observing mono. I either put my hand over my open non observing eye or use a back shirt over my head as a shroud like the old time photographers. An eye patch might be cooler here in Florida in the summertime. ;-)

Thanks for the suggestion. I'll try moving the IPD a bit each way to test the result. As I'm using inexpensive eyepieces I think the IPD setting is almost dictated to me. At high magnifications the resulting exit pupil is often 1mm or less. If the IPD is even slightly off I get kidney beaning or blackouts. ;-)

Here is the process I currently use is to determine best IPD. I'm new and very open to correction if there is a better way.

2) Look through eyepieces and close right eye while keeping my face as relaxed as possible.

3) Evaluate the view in left eye.

4) Move my head as required to see the full circle of the field stop and to make the FOV as bright as possible, no graying, no blackouts, no kidney beaning.

5) Being careful not to move my head I close the left eye while trying to remain relaxed and check the view for the right eye.

Typically one of the views is not ideal. By moving your head left and right (and sometimes up and down) to correct the non ideal view you can determine which way IPD needs to be adjusted to provide the best view to both eyes.

Brent, the first Mirror will be adjusted. The horizontal tilting allows to correct the two eyes` slight misallignment and to create two identical images. The vertical tilting is needed, when I use higher mags. In the ED 120 I go up to the N7, around 130x...