Some great seeing here since the Sahara Heat Plume we had back in late June.  Plus some fair to good transparency: the anticipated associated dust surprisingly pretty low-level.........

A goodly number of clear nights along with all that, but diverting busy days – so little time for posting some nice views......but here a simpler/plainer one from this morning’s early rise.....

Recent apparitions I could not fully convince myself that the duskiness in the NPR was an actual NPC.  Which, due to the increasingly tilting globe, we might expect to see as an increasingly more circular ellipse.  Previous apparitions looking too limb-hugging for the respective globe-tilts for it to be to be an actual cap perhaps; even given the difficulties on such a small disk. This a.m. I became convinced of a lighter tone twixt the limb shading and a more surely elliptical duskiness very suggestive of being the actual NPC.  Even so certainly too diffuse to match of that of Saturn, even allowing for Uranus’ small disk.  With a possibly somewhat less dusky diffuseness surrounding.

A suspected lighter part further ‘south’; in what I figure is a NTZ is marked [intensity] ‘2?’. The suspected NPC ‘fringe’ is marked ‘3?’.

Looks like some fine – tho’ hot – weather coming week........time to replace/renew the observatory (shed!) roof I guess.  All the recent years of repair, starting to look like a patchwork quilt! 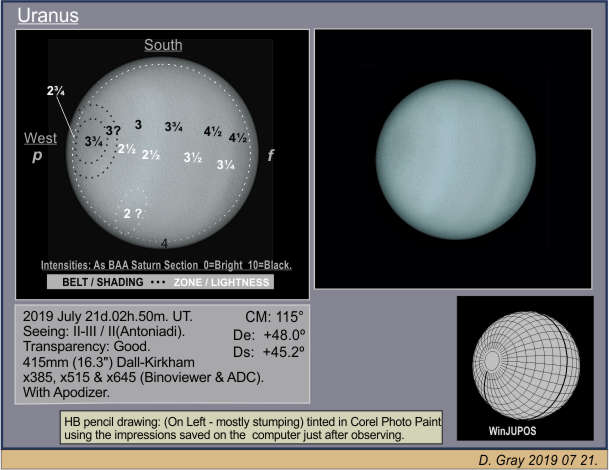 Very fine sketching of planet 7. The detail you pick up is always impressive.

That is some subtle shading--nicely rendered!

Looking at your sketches it's always a nice gift !

Not only the return of Uranus, but first off heading out that morning was catching sight of the Pleiades

in the east climbing well clear of the fence.  A lighter dawn sky already creeping after; but it all heralds

the nearing end of all-night twilight at this northern ‘outpost’.......

Neptune and Moon were hoped for that morning but some stubborn cloud never cleared those.

A really good sketch of Uranus, the details are very subtle as you would see by the scope.

just saw your data about uranus got on last 21st july.

The main topic consists in the presence of this cap, darker than the planet disk background.

This is not something appearing as an elusive feature. This is.

You know the opinions about this.

It should be interresting that observers using only a red filter centrered on the 619nm wavelength perform images with.

Personnally, I reported such also last opposition and issued the data on the jpn alpo site.

May I suggest you do on your own data at jpn alpo.

During this time there’s been some good planetary views, but little time to post any of it.

Just last night was superb (for the altitude!) with Jupiter & Saturn and was hoping to delay bedtime to get the outer giants also,

but then cloud. Maybe just as well as a lot to do today; but determined to post the J&S stuff here later today or tomorrow........

Thanks a lot David for your response.

I did a look this morning at uranus and reported with difficulty this cap area darker than the whole capping.

However this was performed with a 154mm classical cassegrain.

Data will be issued at the jpn alpo site.

I will try nextly with the 254mm  for a confirmation.

At hubble site, images performed on last february showed a clear cap, but british body showed on the period a picture showing a dark feature on the cap.

This is depending on the wavelength of investigation. 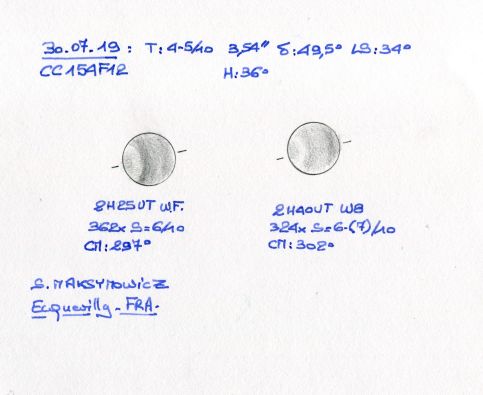 Thanks a lot Tom for your words.

However, David must be congratulated very much more for his data, being the more detailed view of this planet of uranus at present.

Showed a good and improving disk this a.m.; transparency also gradually improving.  Even with the light-loss of binovu & apodizer I could still pick out Titania & Oberon, and that for some while during the increasing light of dawn (sunrise ~04:30); Ariel was suspected.  A yellowish 11th mag star was about 20” north of Titania.

More persuaded now about polar features.  At start of session thought to see a lighter area on the presumed NTZ at the rotationally leading/disappearing-limb side.  That seems near longitude 25º-35º; and roughly checking my July 21 view that seems similarly located (WinJUPOS).  A lot of uncertainty at this point....still getting my eye in with the planet...... 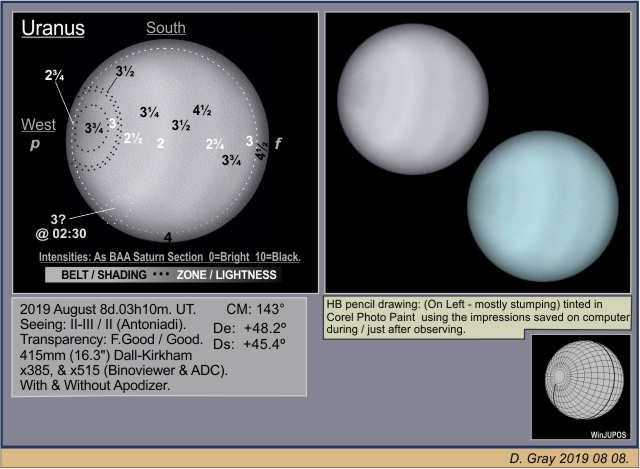 The double ring was captured also through the 254 newtonian 25% CO with optical acuracy present on.

Now regarding the patch on the clear band this may something on discusion, from my opinion a brightening staying on those CM values.

I didn't use an adc, prefering the yellow filter use for improving the contrasts, that was significantly under 400x magnification and 40° planet elevation.

But this patch is more than suspected from my opinion and observations.