Well, conditions were very good early this morning allowing me to observe the Apollo 11 landing site in detail and make a sketch of it and the surrounding lunar features on Day 18.9 of this cycle.

What a difference a day made.  I started out at 98x and quickly moved through 230x to 326x and a steady view.  The trio of astronaut craters were visible immediately as were the Cat's Paw and the other two craters that lie near the spot where the Eagle landed.  The Cat's Paw was the least well-defined of the three which made sense since it's shallower than the other two.

In the sketch, Sabine is smaller than Ritter.  On charts they appear to be the same size but to my eye Sabine appeared smaller--it may have been the way the sunlight and shadows were playing on it (or maybe I just screwed up).  I couldn't get the mare to look quite right either--not the way Frank, Randolph, Cindy, and others can.  Otherwise, I'm pretty happy with it.

Lordy, lunar sketching is hard!  This one took two and a half hours at the eyepiece.  I only wanted to give up twice.

I used white and gray Conte' crayons and pastel pencils, a white Derwent Graphtint watercolor pencil, and a black charcoal pencil on black Artagain paper.  I'm going to have to get one of those white charcoal pencils that Randolph uses to make the brights brighter.  I took a picture with my camera and didn't do anything else to it except crop it, resize it, and flip it left-right.

Note that the cardinal directions are selenocentric--not celestial.  That's the convention used on the Moon since 1961 (put in place by the dreaded IAU).

@ Frank--thanks for the kind thoughts about my sciatica--it stayed at bay for most of this session. 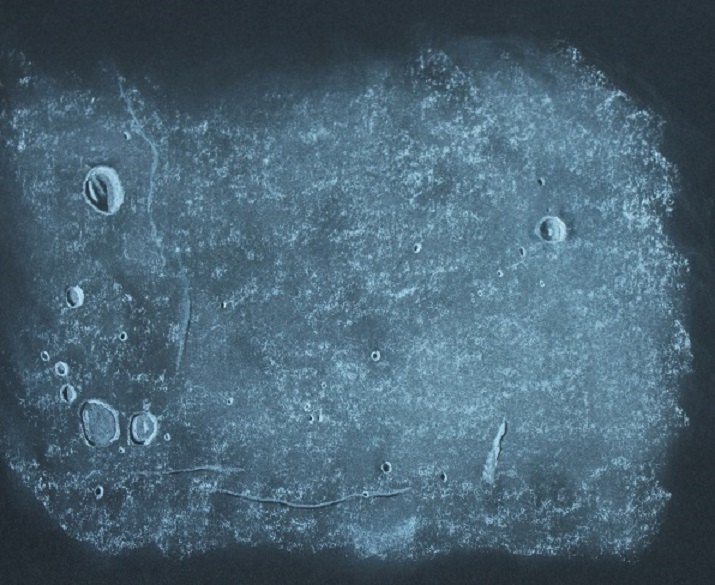 And the annotated version: 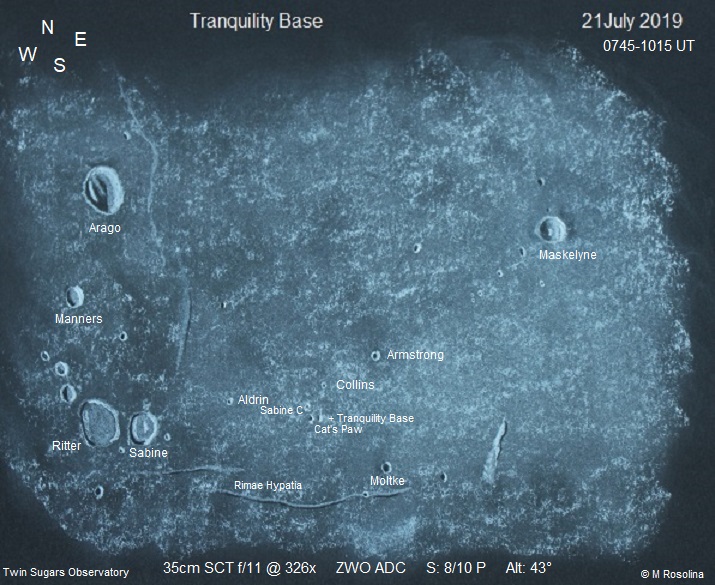 Beautiful sketching.  I agree with you;  you can be too early with the waning gibbous Moon trying to see Cat's Paw crater.

It needs some sort of shadow to stand out. I like your sketch and the texture too. It took me many months of trial and error to get the white pastels to work on black paper the way I wanted it to look.

I like white charcoal too. I don't use it too often but it works well for bright mountain peaks and crater rims.

You are almost as old as I am so you probably remember when craters Armstrong, Aldrin and Collins were named : Sabine E, B and D.

Wow, the Eagle has landed yet again, nice work, well worth the effort you put in

Thanks, Frank--you're very kind.  I think I need to layer more pastel on the paper to get that smooth mare look--more experimenting needed.  I need a better eraser, too.

I realized soon after I began the sketch that I was drawing too small--you really need to go big with pastels.

The angle of the Sun is huge when seeing lunar features, isn't it?  Also, since I was moving so slowly, I was lucky that Tranquility Base was so far from the terminator.

I was reminded about Sabine E, B, and D when reviewing Apollo 11 images and documentation.  Remember, people my age usually have CRS.

Viewer, thank you.  The Apollo 11 mission and personnel were awesome--it was my honor to do the sketch.

Thanks for the likes, everyone!

Super job Michael! A lot of so small details, your scope is so good !

Very good sketch of Evening at Tranquility Base (On July 21st, 2019)

Thanks, Michel.  Yes, I think my scope is pretty good and I used a good quality eyepiece but also it was the seeing.  The super hot, super humid weather that a large part of the US has been experiencing provided some of the best seeing I've ever had around here.

Thank you very much, Dave and thanks, Tom.  And thanks, likers!

I like your sketch very much Special ED.  All these beautiful craters.

This is a beautiful lunar landscape, you have had a lot of work here, I congratulate you.

Many many small craters ,very good moon sketch. I like it very much .The labeling is great.

N3p, Roberto, and Markus--thank you all very much for your kind words.

The scale in my drawing is ~200km by 200 km/120 miles by 120 miles and a fair number of small craters (i.e., larger than 4.8 km/3 miles) were visible with the good seeing, so I felt like I needed to include them in the drawing (even though I was getting tired).

I studied this area for over two hours the night before (but didn't make a sketch due to conditions) so add that to the sketch time and you have almost 5 hours of study and sketching.  No wonder lunar sketching is so hard!

Michael, you only wanted to give up TWICE?

I will sometimes throw away 3 pieces of paper before I feel like I am getting the hang of it!  This is terrific work and the rimae and craters so nicely done. I also like the floor texture.

Thanks, Cindy--that's a fine compliment coming from you.