I caught sight somewhere on here recently of some speculation about Jupiter’s moons and how they turn to bright disks passing over the planet’s dusky limb regions.  The speculation being that the adjacent black sky being a strong factor in the effect.  Not so....in fact black sky is more contrast-affecting the limbs to look lighter than they actually are.   But our visual systems ‘know’ otherwise and that is demonstrated with the effect against the sunset-sky on the date reported here. No contrast-aiding black sky; having also seen that ingress/egress-effect in a mid-day sky a couple of times.  What is also apparent with those limb/satellite events is that the limbs are actually a good deal darker than even the NEB......!

Galileans: The start of the session was the classic near-sunset very steady sky......becoming very steady for about 40 minutes, then more jittery as the temperature noticeably drops.

It was during that tremulous air that the satellites where fitfully showing much better defined disks with good snatches of –albeit faint – detail.  Seen that effect a number times this and last apparition; so decided to see what was detectable. Seemingly due to good number of seeing cells larger than the disks of those moons; perhaps manifesting with an average frequency of half to one second.

Other times I’ve experienced similar I also gave attention to Jupiter itself where confining  my more than usual attention to such as those small SST-ovals allowed some localized rendering even though overall the planet might seem a mess and confounding the less practiced.  Not talking here about what we do anyway to deal with seeing vagaries; but here we confine to the desired localized object disregarding the rest.....unless the seeing settles more!

Saturn: after the Galileans the seeing was settling to a lot less tremulous and possibly my best view this apparition.  Again I caught a light seeming oval nestled twixt EB & NEB(S); a different longitude (f. end) CM I 330º one in May being CMI 190º (p. end).  There may be at least three around the planet in that EZ(N) latitude not sure till I can check my records more fully.

NPC:  not that I’ve ever distinctly defined, more inferred, the visually difficult Hexagon shape but this has all but escaped me recent apparitions; however this occasion there was a ‘flatness’ to it with a darker intensification that suggested seeing one of the vertices on the leading edge.

All in all yet another good night in the lower sky as the ADC + Apodizer played their part as before.....Dave. 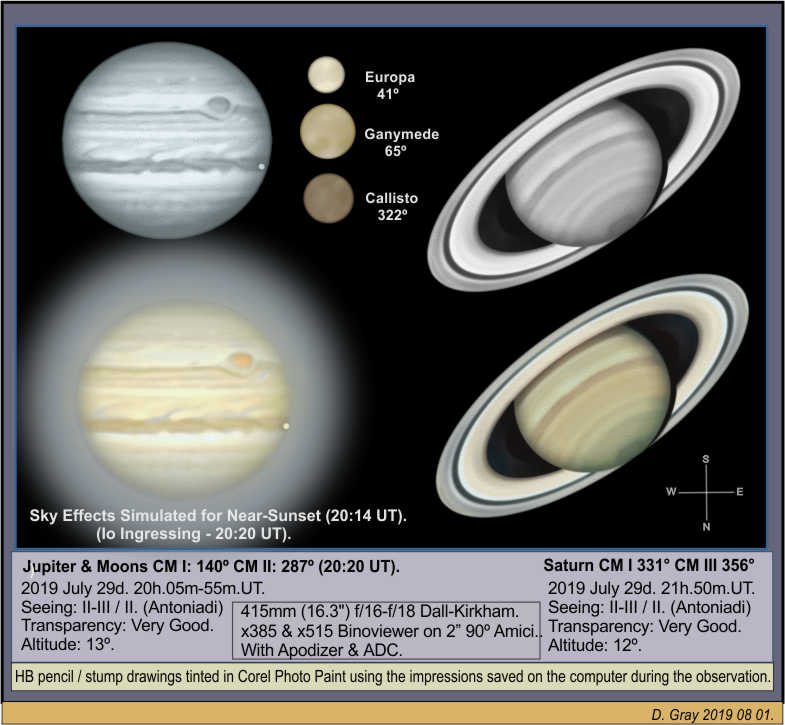 Spotted a scaling error with the satellites.......now corrected.

These sketches are really good, it seems captured with a camera.

Very well rendered observations of Jupiter and its moons and the Ringed World.  Your eye combined with your technique is truly extraordinary.  Your experience paired with your excellent telescope really shines.  It's a pleasure to see your drawings.

Impressive David, with regards to the Sky conditions also.

Since my first posting those observations here we have endured days of thundery showers; even so

what clear skies were had the seeing has been fairly consistently very good – transparency less obliging tho’........

All that rain: the observatory/shed roof replacement, cut to size, still awaits some dry days for final affixing.

It's always a joy to see your work!

Giving myself some respite from the DIY work coming days and doing something (undecided); more therapeutic

and maybe posting some of it later today.

Something sort of landscape-themed: perhaps might be in the vein of what you enjoy and do so well.

The new camera is proving great taking faithful shots ('scans') of pastels and that is what I plan set to right away.

All that with an eye on the - so far - forecasted clear skies tonight.

Stunning observations and renderings as usual.

When you do the moons I'm always interested especially in Callisto.  The others as well of course - but those low contrast markings on the dimmer moon pique my curiosity . Everything else is amazing. The olive tones in Saturn are a fine mix with the browns.  And Enckes at only The12° altitude!!!  The beach sand EZ is great on Jove. I've only gotten lousy seeing this summer so it's a quick muddle at best with the C90, the 8 needing a new spider assembly.  I could see the fluttering contrasts with the 90 but too fast and soft the Pickering.  Rather sad too - isn't this the most interesting the EZ has been in a while?  Your Jupiter is more rich than I could draw - when the details fill in like this it's like having buckfever at the Eyepiece!

That you got Europa shadings is compelling.  This tiny moon way out there is (I THINK) the sole best chance for life in our Solar System besides earth.  The global subsurface ocean heated by the unsettled core disturbed by Jupiter's pull - I'm believing at the LEAST has bacteria and protozoa.  Possibly even shrimp like we have at our thermal vents at the bottom of the sea. So yes, those pale threshold markings take us one step closer to this good life canidate.

Mars, I'm frustrated that those resources aren't going to Europa!