The August 2019 Challenge is now open. The target is IC 5070 The Pelican Nebula. To reduce the number of stickies, please submit your entry to this thread.

To increase participation over such a diverse group, the winner will be selected by random drawing. Please feel free to start a thread requesting guidance on your entry prior to submitting it, the whole purpose of this challenge is to learn and compare on a common target. Entries must be submitted by midnight eastern time on August 31, and I will try to announce the winner early in September.

The sky cleared just after midnight so I went out for a picture of the Pelican Nebula.  This picture is taken with an ASI183MM-Pro using a 8" f/2.8 power-newt on a CEM60 mount, guided.  47x2' H-alpha for luminance and red,  15x4' OIII  for Green and blue for  2 hours 34 minutes integration.  Stacked in DSS.  Processed in Star Tools and Gimp.

In keeping with the spirit of things.

This is my first shot at trying to get a real image of anything.  Found out after the fact I kind of did things wrong, hench no color.  But hey it is IC 5070.

Still looking for a mentor. 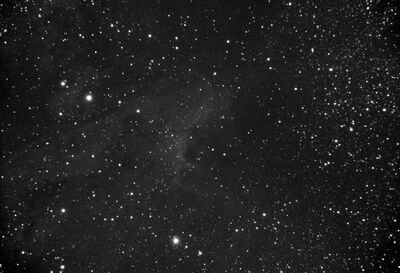 If you must laugh, lets have a beer and laugh together

Here's a crop of the Pelican and North American Nebula region I took earlier this year. 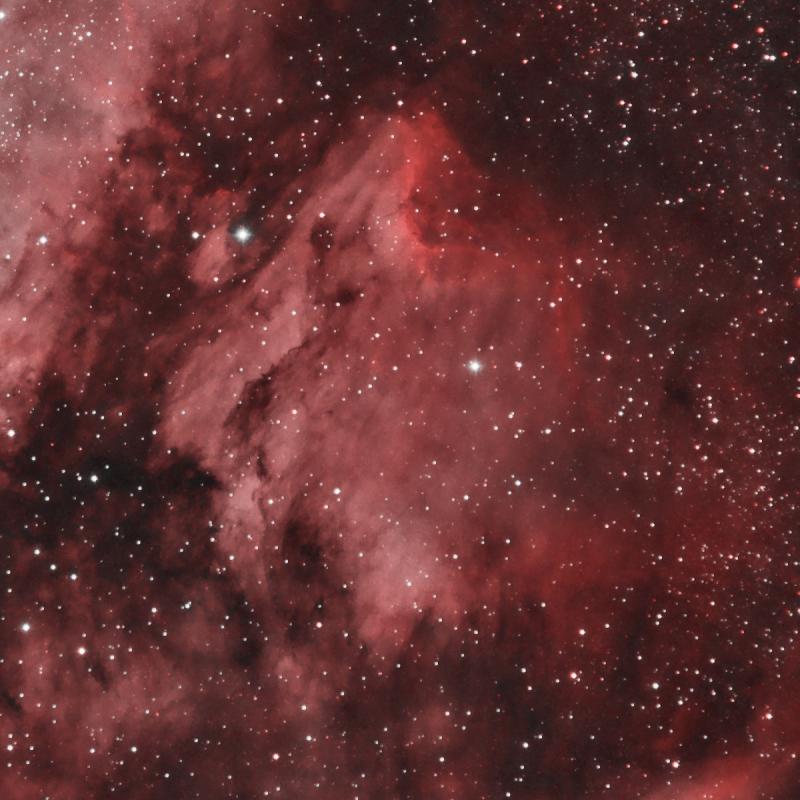 Here is my attempt at this target. The night was very warm (80-85 F avg temp) and the moon was half lit, though quite far from target. So I was surprised to get a reasonable image in just over 2 hours of time. 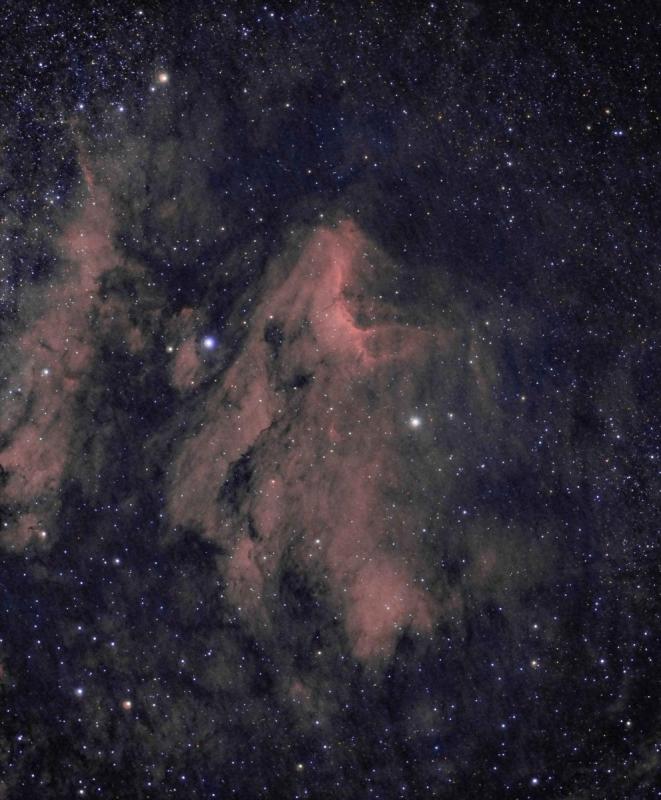 Outside temprature : Very warm between 80 and 85 F (typical S. Texas in summer),

The length of each sub was basically limited by skyglow (LP!!), so I had to take as many subs as I could before the target went into the tall trees in my backyard. Here is a link to a higher resolution image posted on my Flickr album. Hope to see many better images of this target ..... Anil

ASI071 One Shot Color Camera. About 4 hours of subs (no flats) using my TV127is. Processing was entirely done in Pixinsight except for applying a minimum filter in Photoshop because I don't know how to do that in Pixinsight.

This was taken last Saturday, August 10, 2019. It was partially cloudy and I was struggling to stay awake and almost gave up on imaging that night but clear sky chart said it was supposed to be clear later that night so I opened the dome and left the camera looping images until the clouds were not in sight anymore. I fired sequence generator pro, saw the first 5 min sub come in and passed out, woke up around 4:00 am with some data stored, images still in progress. I was not perfectly focused so I didn't think I was going to get an image at all but since it was just the second time testing this combo equipment I didn't even get upset, just aborted my sequence and fine tuned focus for the next imaging session. I was pleasantly surprised when I processed the image and saw that it didn't look bad so I kept working on it.

We had a clear night last night, so I decided to shoot the Pelican Nebula for the first time.

This was a short 4.6 hour integration shot in my Skywatcher MN190 telescope and ASI183MM Pro astro camera. 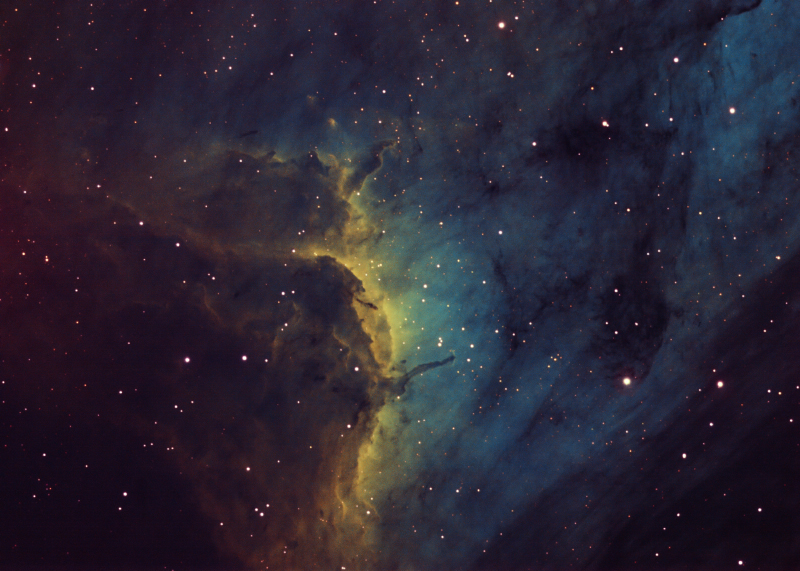 This is my first try at imaging IC5070.  Taken over 5 nights from 8/7 through 8/12.  Capture with SGP, processed using PixInsight.

El Toro staring at 56Cyg in the Pelican nebula, IC5070 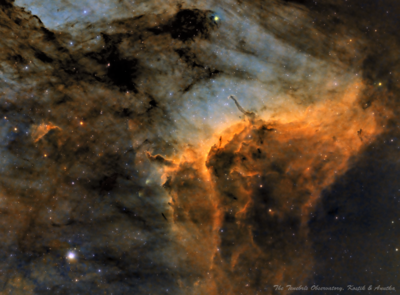 I dislike pelicans so here is my Rabbit nebula.....

Here is my 10 Hrs integration of Pelican Nebula I took on Aug the first week of Aug an finished on Aug 10.

Of course FLAT, DARKS have been added to calibrate light frames. 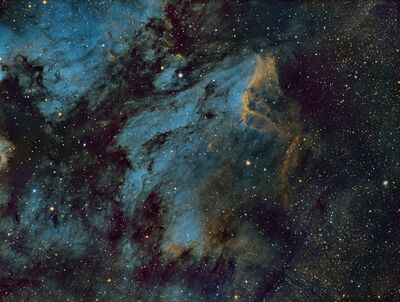 Here's my attempt at the Pelican Nebula with an OSC camera. The skies cleared long enough the last two nights (Aug 19 and 20 2019) to enable collection of 3h 8m of data. 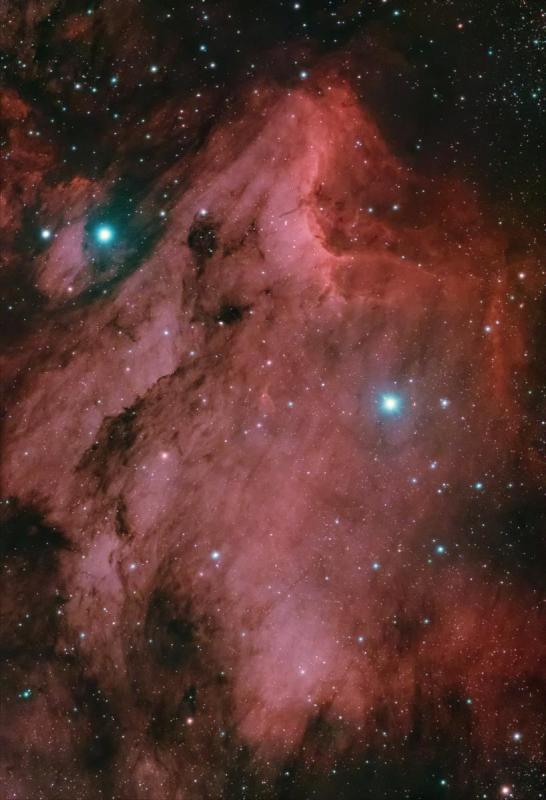 I imaged IC5070 on 8/19 and 8/20/2019, the only chance I have had so far. Moonlight hurt the quality, but have to take what I can get. Also had issues with guiding giving me football shaped stars. PHD2 at first said most likely a faulty cable, which I replaced. Then it said possibly a cable snag, so I checked all cables and moved one that I thought may have been a problem. After that the message was possible mechanical problem with the mount. Mount is less than 6 months old (sigh). Also on second night after meridian flip the guide camera was not picking up any stars, even though the framing was the same. After multiple adjustments I was able to get something to guide from. Anyone know the lifespan of the Orion SSAG? 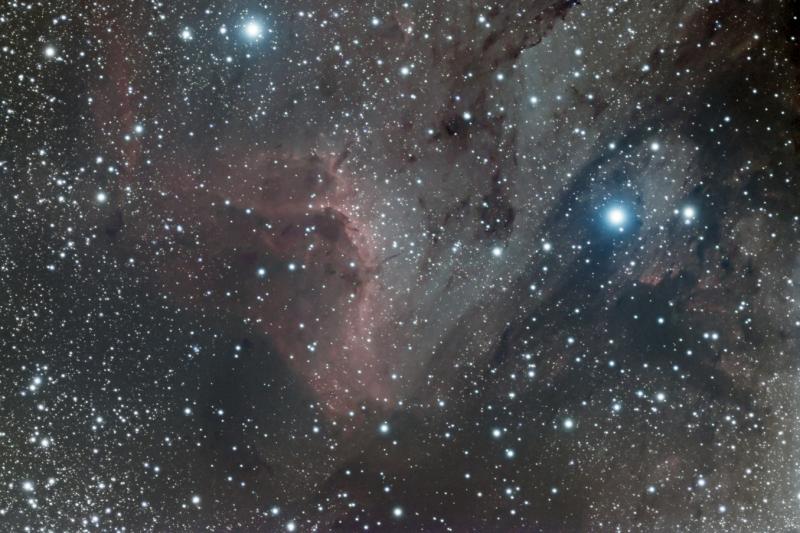 Here is my wide angle view of the Pelican Nebula, shot last night. I only got about an hour of data but I think it still turned out pretty good. 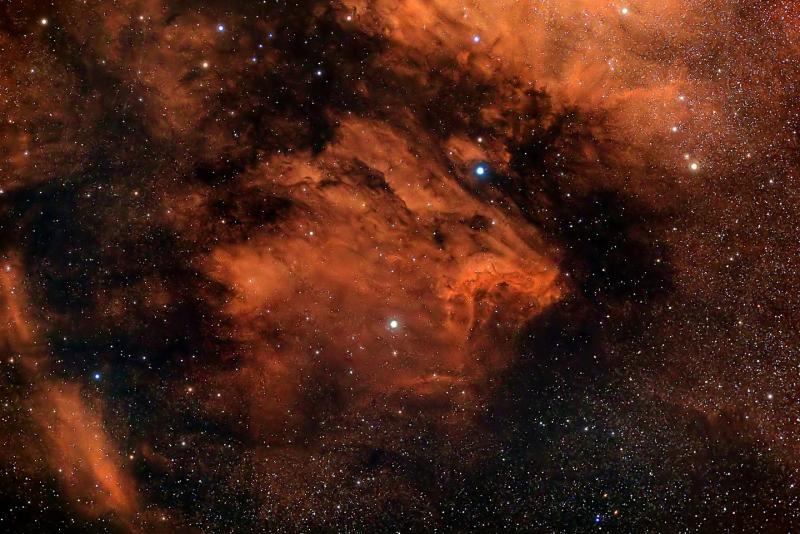 here my contribution and my first SHO combination image ever done.

Captured in during this August in the UAE, Razeen desert.

Captured last weekend. This is my first atempt. I hope you like it 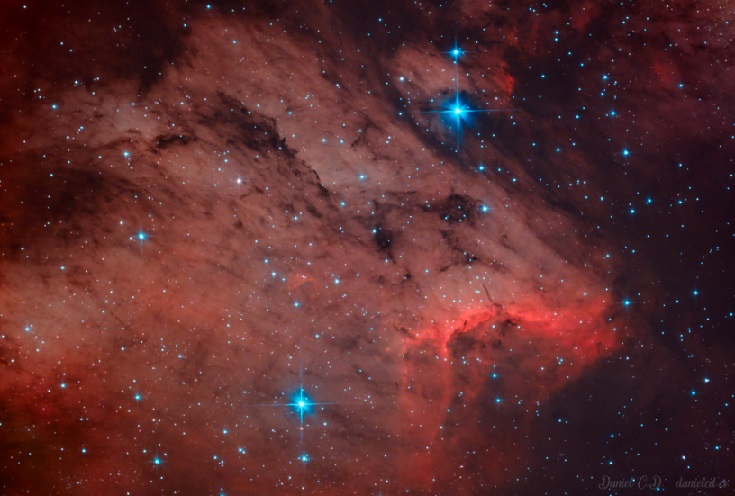 Here is my attempt at the Pelican in H alpha taken from my Bortle 8 suburban backyard.  Minimal processing in PI.  RGB star field was added to H alpha image.

Some intermediate contribution, I don't really have enough time to properly process the data I have so far, but as deadline rushes in I'll show what I have: 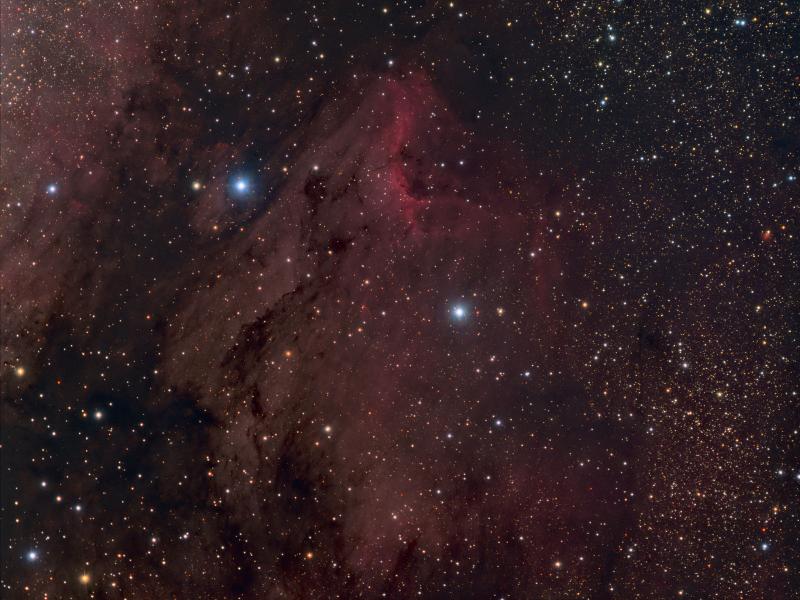 Hi everyone.  I usually post on the EAA forum, but they are not doing "Objects of the Month" anymore.  I think there is some significant overlap between EAA and traditional imaging as the software and processors become more powerful and things can be done in real time that used to only be able to be done in post processing.  My images aren't intended to be prize winning since I'm trying to get a decent image in a short amount of time. 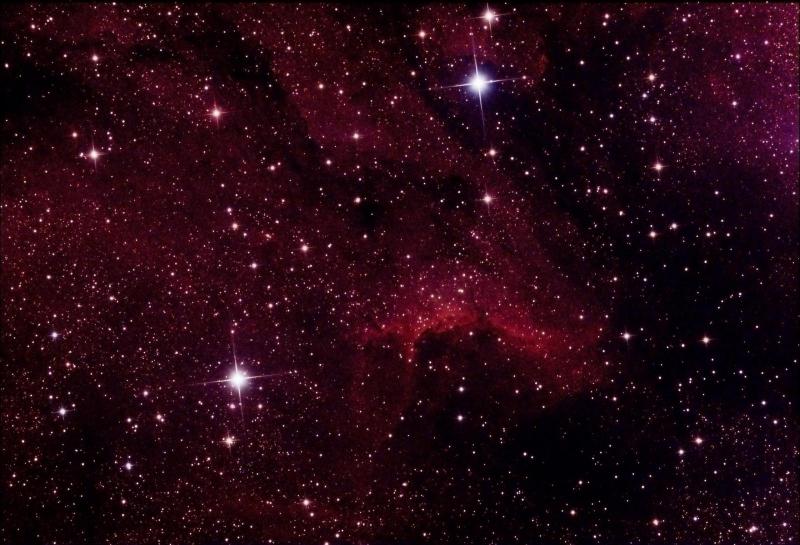 Ok, first off, I'm amazed at the variety of image interpretations so far.  Very creative crew out there.

Second, the field of view of my telescope is a bit narrow for an object this size, so this is a bit zoomed in compared to the rest.  It's basically the Pelican's upper body.  I didn't realize the poor framing during the imaging, as it is too dark an image to see anything in the individual subs on the camera.  So, I was imaging on faith that the plate solve using the guide scope was close enough for the imaging scope.  Seemed to work, though I would frame the head region if I were to do it over.

The image was processed differently than what I've done in the past.  Instead of using Deep Sky Stacker, I used Sequator.  It's not nearly as full featured / optioned as DSS, but Sequator appears to work perfectly on my Linux PC under Wine.  It's also much faster, very clean, very easy to use.  The stack here took about 25 minutes; a similar stack in DSS 4.1.1 took 10 hours.  That said, there is a new version of DSS 4.2 that is known to be a lot faster, but I haven't tried it as yet.  And there's still the Linux/wine issue.

Sequator, for some reason, seemed to produce a stack with smaller stars, and less walking / pattern noise than DSS.  Instead of being blobby, the noise looks more stringy, almost creating an embroidery sort of pattern.  Sequator doesn't seem to have a place for Dark-Flats, so they weren't used.  My guess is that this raised the black level, so the blobs don't show.  No idea how they do the pixel math.  I'm still playing with the settings, but so far, it looks like a tool worth exercising a bit more.  Not sure if it can be made to handle LRGB, however, but this is from my DSLR.

Remaining processing was done in StarTools, beginning with the Contrast tool instead of Develop, due to the high dark level.  Seemed to handle it well.

Stacked in Sequator, Processed in StarTools 1.3