Shioli crater in the lunar nomenclature

The IAU has added the name of Shioli crater to the lunar nomenclature. Coming in at 0.27 km in diameter, its coordinates of 13.33S, 25.23E puts it on the eastern floor sector of the crater Cyrillus.

What was the previous designation of the Shioli crater?

Maybe it had none.

I think you're right, Aubrey, in assuming that the crater didn't previously have a name...it looks like a relatively fresh impact crater too.

I can never see why the IAU, at times, set out in naming a crater, but then make it near impossible to see (from Earth, if not from orbiting satellites, too). At least, if a crater is to be named, then why not give it to some crater diameter more substantial in size - there are enough of them up there that deserve such recognition.

Here is the IAU link, and it looks like its title's origin is that of a Japanese female name (there's mention here of an actress, Shioli Kutsana, who appeared in 'Deadpool 2', but I haven't inquired as to if it is named in her honour).

Btw, the crater looks like it impacted more on the ejecta deposits from Theophilus (Erathosthenian in age - 3.15 to 1.1 byo) that now lie on Cyrillus's northeastern floor. 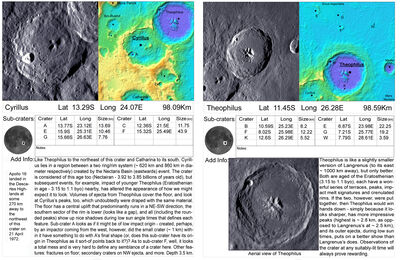