I recently acquired an example of this variant.  It did need love, but I wanted to explore this fast focus model that's more subtle and integrated than the original with the giant knob, special cam system, and floor plate on which the field model and focusing box mount.

This one is elegantly internal, and replaces the focusing rod with a diagonally-toothed rack.  The protruding rack is covered by a "top hat" can on the rear of the control box, and the focusing knob has less than one rotation, attached with a flanged sleeve at the right panel of the control box. This was apparently offered 1987-88.  Unlike the earlier "big-wheel" fast focus (1972-82) this could be used on a duplex mount and was even offered as an option on new Standard models (though that would be a rarity!)

The trick is friction.  In a horizontal orientation as would be most common for fast-focus terrestrial viewing, the internal springs push the mirror forward.  Racking back (close focus) is against the main mirror spring, and forward (distant) is with it.  With the normal rotating focus knob and a finely helically-threaded focus shaft this is unnoticeable.  With the original fast focus it's also unnoticeable, because the cam doing the work bears the brunt of that spring force.  But in this application it's only friction that resists the push of the main mirror spring.  That means that in one direction the user turns the knob against the friction minus spring effect, and in the other friction plus spring effect.  This means a big difference in user knob torque when focusing in or out.  It's not difficult or clumsy, it's just not quite "slick."

To a collector, and perhaps to the right birder or picture window tripod user, this may be the best possible focusing system for a Questar, especially for guests.  (In the gun world, this is the equivalent of the "girlfriend machine gun" the suppressed MP-5SD that neither hurts the ears nor the shoulder).

The scope appeared to need both a mirror and corrector recoat.  So I had a full take-down plus a new focus mechanism take-down.  The focus mechanism added some novelty.  Somehow, it turned out that the mirror cleaned up just fine and only the corrector needs a recoat, so my full takedown of the focusing mechanism served no necessity other than the learning experience. 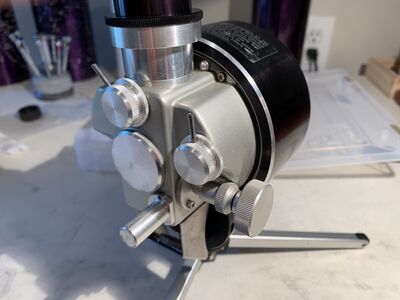 The pinion gear is on a shaft connected to the larger knob on the end.  Blessedly, there is a flat ground on the shaft for the knob set screw. 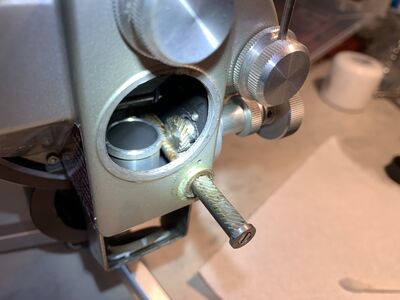 There is a washer stop on the end of the shaft secured with a flat head screw.  This ensures that the shaft and mirror can't slide forward with the thimble catastrophically coming off the spindle.  Not shown is a set screw in the rack rod that redundantly prevents the shaft from going too far forward through the base plate- this can be driven in fully to let the rod go forward for removal, but control box removal is needed for access.  Without this set screw, mirror removal could be done without removing the control box. 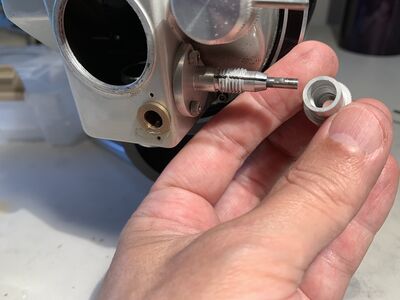 The inner knob is the friction/brake/tensioner.  There's a small plastic washer between it and the bigger knob.  The tensioner operates a tapered collet that grips the shaft to a controllable amount. 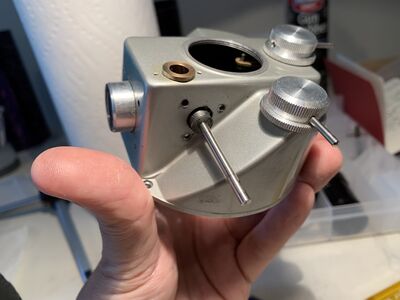 The pinion has a rear cylindrical boss that is held to control its position.  The control box opening is oversized. 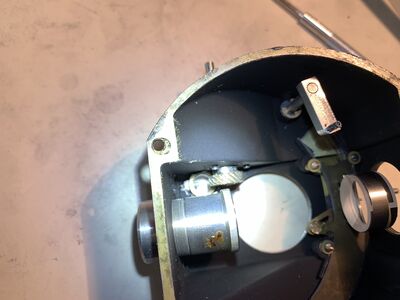 Small pins in the control box brass bushing prevent the rack rod (with its lower groove) from rotating.  The pinion is pinned to the shaft in a way that did not invite an attemt to remove.  The finder baffle tube blocks removal of the pinion and shaft, so I opted to let it remain. 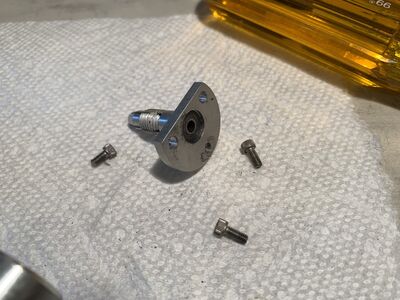 The focuser flange has a recess in its lower surface that receives the pinion boss.
If this were designed as a new system and not for adapting readily to existing control boxes, it would be nice to move the pinion and knob farther forward, to reduce or eliminate the focus shaft protrusion.