Now that I've had a couple of days to look over my processing results, I need to comment on a few things:

Thank you for your attention, and I hope you enjoy the image.  As usual, your comments and constructive criticism and suggestions are always welcome!  I'll copy my fuller description below and also link the higher resolution images. 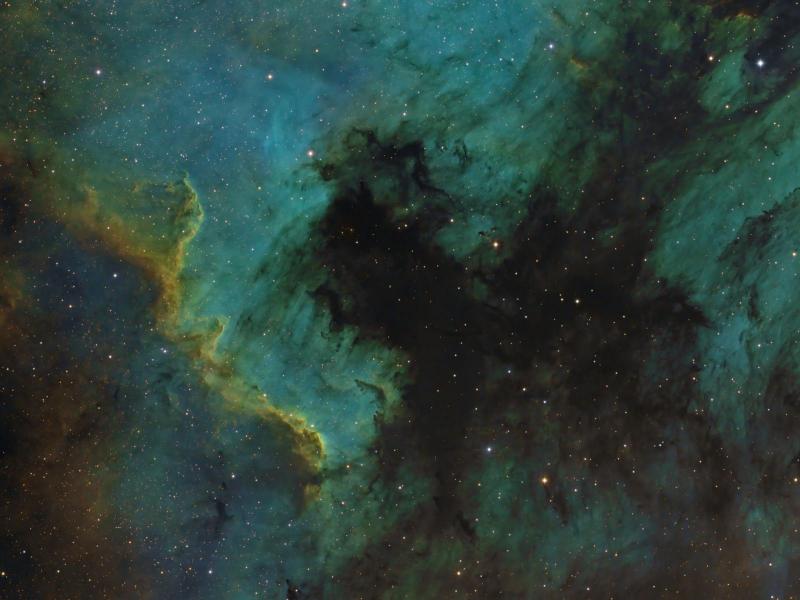 This is the central portion of the North American Nebula, NGC 7000 or Caldwell 20, highlighting the Cygnus Wall in the SHO palette.

NGC 7000 is a large nebula complex in Cygnus near Deneb.  This section I have imaged shows the Cygnus Wall, a region of star formation.  It somewhat resembles Mexico and Central America, hence the name North American Nebula, although that shape may be harder to see here.

The distance to NGC 7000 is not precisely known, nor is the star responsible for illuminating the nebula.  If it is nearby Deneb, then the distance would be on the order of 1,800 ly with size about 100 ly.

I have imaged this in NB using the SHO palette.  I have come to enjoy keeping more green in my SHO images as this tends to help discern regions of highest OIII density vs. mixed regions as seen here.  It's a matter of taste, of course.

I hope you enjoy this image.  In the future I would very much like to image with a shorter FL camera lens, perhaps on the order of 300mm or smaller, but first I need to purchase such a lens.  Recently I confirmed that my cheap, terrestrial zoom lens, which does extend to 300mm FL, is grossly inadequate for astroimaging.  Something for me to look forward to!

P.S.  Interestingly, on the AstroBin site it looks like my annotated version is shown when you pass your mouse cursor over the original (final) version on the main page.  At least this is the behavior that I am seeing right now.  I hope that action remains for you as well.  Also take a look at the inverted images as they really highlight the Cygnus Wall quite well, giving it an almost embossed look.

You've got a pretty nice looking image there and since you asked for "comments and constructive criticism and suggestions", I'll give you a few comments.

1)  There's nothing wrong with leaving the green cast as it is, but I think that you'll get more impact if you dial it back.  I'd probably start with SNR at least 80% on the green channel and experiment to find an appealing setting.  When it comes to green, I often find that less is more.

2)  I'd also be inclined to remove the purple/violet but de-greening may make that a non-issue.  The other option is to rebalance purple more towards blue.

3)  The overall look is dark and brooding--and that's appealing for a lot of folks; but, to my eye, the composition is flat and nothing stands out.  Color, contrast and detail are your best tools to provide depth.  Black is black and you are limited with what you can do in those regions, so I'd suggest punching up the yellow/orange regions with increased brightness, contrast and sharpness (where you've got enough SNR.  That's the most interesting structure in this region so don't leave it hiding in the background.

4)  The way you have it framed emphasizes the dark nebula and to my eye it looks as if the emission nebula is hiding out in the corner behind everything.  If it were me, I'd experiment with different crops to make the emission nebula more the center of attention once you bring that region forward with more brightness and contrast.  Framing can make a big difference in how an image comes across.

As I said, it's a good image, but I think that with a little more work you can take it to the next level.  (BTW, I reprocessed my image of the same region about 5 times (starting from scratch) before I reached at point where I thought it was just about good enough.)

I'm glad to see that you are getting some good imaging done.  I finally fixed my scope but since then, it seems to rain every night out at DSW so I'm still getting nothing.

Thanks for the comments, John, all very valid ones.  I was looking at it again this morning and concluded the same as you that it was still too green, dark  and "brooding" as you say.  I was hoping for more contrast in the "black" areas, but that didn't come out.  I'll revisit this one again once the dreary and "brooding" Fall blows in and I have lots of cloudy nights during which to experiment.


Also tagged with one or more of these keywords: astrophotography, ccd, dso, imaging, refractor