This was a good night with the 235mm cassegrain under average good images.
Period was just before the moisture deposition where after the image quality was degrading.
470 and 392x magnification was in in use during.
Banding pattern indeed with the polar cap a little darker than the whole clear hemisphere part.
Main thing was the capture of the brightening in the temperate band clearer than the others. Please refer to the sketches.
This could be a site for spot occurence (any brightening is not obligatory followed by a spot: an hypothesis to investigate.
I am waiting for fixed images with the 235 and 254mm apertures for a deeper record.

Some other reports are issued at http://alpo-j.asahik...test/Uranus.htm

Thanks for the read. 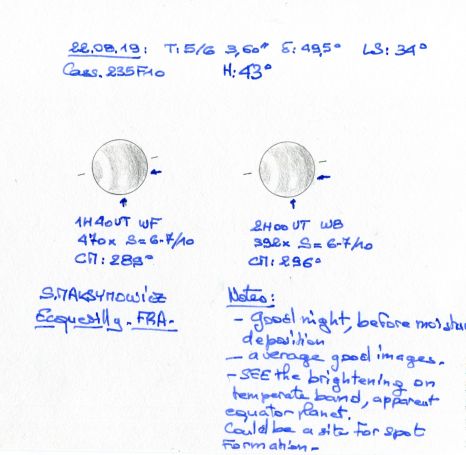 Well done as are all your recent sketches over at ALPO Japan.

Thanks Tom, Frank for your kind words, also gents for their likes.

I did something this morning with the 150mm refractor F10, images were only average but the report below was proceeded anyway.

Weather is becoming very hot here sothat the observations would be on stand-by now. 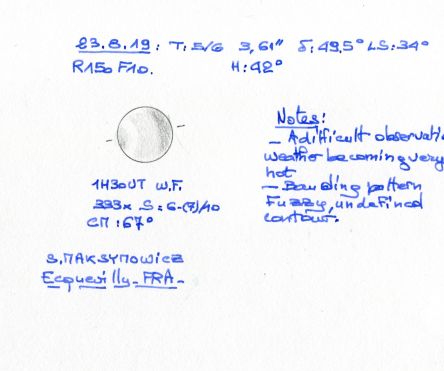 Thank you to share your Uranus sketches with us Stanislas-Jean

Thanks a lot Michel.

Wow. Nice to see how the globe progresses from drawing to drawing.

Thanks Pete for your words.
The main topic is concerning the brightening That may be later a spot.
Indeed an hypothesis that must be verified on investigation by observations.
Nobody knows.
Stanislas Jean

This was an average good night for observation of uranus with calm moments through the 235mm cassegrain on 31st august.
470 and 412x magnifications were used with profit with a period of worst seeing that helps me to draw the patterns collected at the eyepieces and filter.

At 2H00UT time, the seeing was at its best allowing me to draw uranus:
a fuzzy polar cap that seemed to be circled by a darker ring
bordered by a brighter band relatively
then the temperate band, where at limb a darker section of the ring on the band was highligted
then a thin equatorial bordering
then a dark hemisphere band.

At 2H25UT the seeing was degraded relatively, magnification reduced with the use of the W8 filter, helped me to recover the initial observation except the dark section in the temperate band.

At 2H15UT, a degraded period occured with 5-6/10 images only. The sketch is given for comparison: a clear polar cap unfeatured, then the temperate band then the dark band on the other hemisphere. This pattern recalled what it was captured with a smaller aperture, 5-6". Most of the the first level features were washed by the seeing sometimes present.

Difficult to say more about, except the fact that the overall contrast levels observed were at a lower status than the status noted on july. 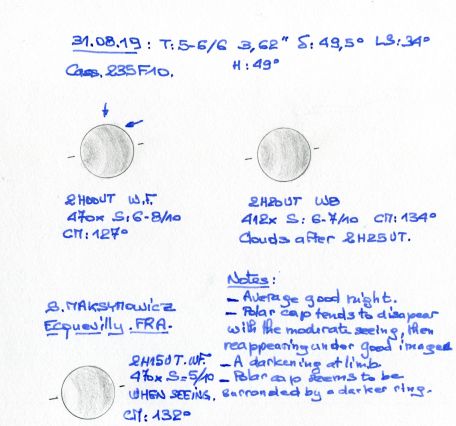 Very happy to show this picked up from the jpn alpo site:

Congratulations to Mr Rodriguez from Spain.

Here is a report of uranus performed this morning the 8th september with the 235mm cassegrain.Images were average to good on short periods.

What can be highlighted:

- a brightening noted at the limb in temperate band,

- a darker pole  and a clear ring that seems to be filled also with degrading grey tone area as drawn,

- a polar cap that seems to be surrounded by a dark collar: this needs a confirmation with better images and with the 254mm use. However quite possible to be here. 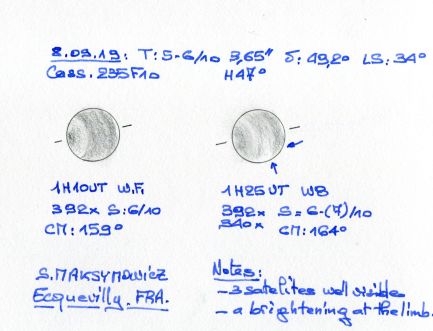