I'm looking to observe a lunar crater about 150km in diameter, with a peak ring feature. Can anyone point me in the right direction? Thanks!

Download the Virtual Moon Atlas, freeware. Pythagoras looks close to what you are looking for, at 129km.

Peak-ring features are usually associated with larger type impacts, where the dynamics produce extraordinary effects on the lunar terrain. The central peak is, essentially, dissolved in to the impact ejecta, but a 'ripple-like' (ring-like) effect also results. Think looking at Orientale - the ultimate 'Ring' effect. They are other impact, ring-like effects - the possible mons associated to the Imbrium basin. 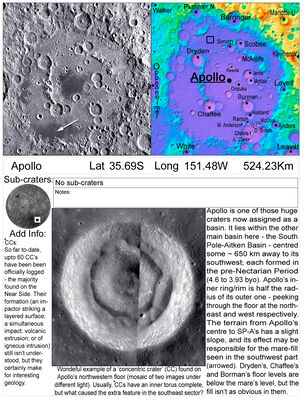 My take on the concentric craters is that the inner torus is caused by even slumping of the crater wall.

This slumping was especially noted on the minor planet Ceres by the orbiting spacecraft Dawn. The surface is friable and homogenous with likely entrained ice under weak gravity.

The peak ring is an outer feature?

Yes, Bill...the CCs are still a puzzle as to how they form, but your slumping hypothesis is just as good as any others out there, I suppose. Personally, I fancy the rebounding of layers hypothesis, where several layers of lava accumulated over time, and then as the impactor struck, each layer responded (rebounded) differently. I like the Marth CC, the Hesiodus A CC and the one on Humboldt's floor.

No, the peak ring is an inner feature, for example, in the Apollo image above (it crosses the letter P in the word Apollo), one peak ring is seen, but you can get occasions where two or three peak rings occur, too. There are quite a lot of peak ring features on the Moon, but the lot of them really are associated to the basins, so finding craters under 150 km in diameter with peak rings is rare. Btw, we have peak ring impacts on the Earth, too: for example, in Canada, while this one is on Mercury.

@John Moore indeed, CCs are mysterious. Many are smallish (7-10 mile range) whether on Ceres or the Moon. It could be that the impactor energy/ material impacted/ subsurface conditions all conspire to reflect some of the energy back to the crater excavation to create the ring. Just doing some arm-waving here. We won't know til get to the site and do subsurface investigations.

The latest published findings on concentric craters favours a magmatic intrusion model, where lava intrudes the base of a small crater, raises the floor to produce the shallow profile observed and produces the bulges we see as the torus. This sounds very plausible, especially when you consider that CC's are found in the same places that Floor Fractured Craters are found, around the edges of the mare, and that these craters are almost certainly the result of large scale magmatic intrusions. But if you look at CC's in detail you would be hard pushed to find any evidence of volcanism, and the only obvious example is a small patch of pyroclastic material on the torus of the crater Firmicus C.

The rim collapse model mentioned above however can account for many features seen in CC's and to get an idea of why this might happen, have a look the craters Humboldt and Lavoisier. Both of these have small CC's with younger but comparably sized craters immediately nearby. In both cases the CC's  are older than their neighbours, and are cut by the fractures that criss cross the floors of the larger craters. These fractures formed when the floors of Humboldt and Lavoisier were pushed upwards by large magma intrusions entering the crater floor from below. As the fractures cut the CC's it is apparent that the CC's were present before the fractures and therefore uplift occurred. The younger craters however cut the fractures and therefore formed after the fractures had formed and the episode of uplift had probably ceased. The uplift may have de-stabilised the concentric fault system that surrounded the CC causing the entire rim to fail simultaneously and collapse down to form the torus. If you look at Hesiodus A it also seems to have experienced localised uplift and sits on top of a small ENE-WSW trending bulge in the surface to the west of Hesiodus and to the south or Rima Hesiodus.

Quite a few craters can be found with only half a torus on their floor such as the crater Leaky, and if you check the rim height around the crater circumference, it is lower on the side where the torus is – suggesting that in these cases the rim has partially collapsed to produce a partial torus. The concentric fracture system surrounding craters is not really obvious on the moon, but the seismic data images of the Silverpit crater in the North Sea show how extensive this system of cracks can be.

Of course uplift could well be the result of magma being intruded from below, but it might be that  vertical displacement produced by another mechanism such as tectonism could also achieve the same effect of collapsing the rim, or part of it.

Very interesting, Tom...I seem to recall having come across this hypothesis re: volcanism, and I think, also, there was another hypothesis that they may be due to extrusive domes and lava extrusion events.

Btw, and I understand we've slightly gone off topic to the original poster's (known as 39.1N84.5W) above inquiry, as CCs and Peak Ring type craters are entirely different, but for anyone interested in viewing images of the CCs, I put a reference to them way back-in-the-day when the MoonWiki was alive. They are, thankfully, still available HERE (note, as with the changeover of the files and pages to Chuck's US Wiki, some links may not now work.

I'm learning more. But I'd like to hear about peak ring craters.

thanks for chiming in!

I very much recommend the article "The origin of lunar concentric craters", published in ICARUS by David Trang et al. 2016.

The following figure is from the paper.

Back to Peak Rings – there are a couple of good articles that shed some considerable light on these structures and on Chicxulub in particular. The first is 'Peak-ring structure and kinematics from a multi-disciplinary study of the Schrödinger impact basin' by Dave Kring and others and published in October 2016 in the open access journal Nature Communications. They look at the Schrödinger basin and identify a lot of  crustal rock types in the peak rings themselves and no rocks indicative of coming from the mantle. They used a computer model to look at an impact involving a 25km diameter impactor traveling at 15km/sec to produce a basin of roughly Schrödinger size. Their conclusions from the simulation took the form of a model called the Displaced Structural Uplift model, which essentially suggests that during the impact process a larger version of a central peak uplift occurs, rather like the central peak of complex craters such as Copernicus. However, in the case of basins the uplift is so big as a consequence of the impact energy that the uplift is gravitationally unstable and collapses back downwards and outwards, with material from the collapse being pushed out across the crater floor in a structure rather like a nappe – which is where a displaced layer of rock slides along a fault plane over the top of the rocks below. The Matterhorn in the Swiss Alps is the result of a such nappe type displacement where rocks forming the peak have slid over the top of underlying rocks along a nearly horizontal fault plane. The displaced material spreads out and when it meets the inwards moving collapsing transient cavity rim material it rides over the top of it and comes to rest forming the peak ring. Basins are shallow, and the impact does not bring up any mantle rocks, but what you end up with is rocks from the middle and lower crust  lying on top of rocks derived from shallower levels of the inwardly collapsing rim, a reversal in effect of their previous positions. This is a very condensed interpretation of their findings!

The second article is 'The formation of peak rings in large impact craters by Morgan and others published in Science in November 2016 which deals with a borehole drilled through the peak ring of the Chicxulub impact structure. Chicxulub is the only terrestrial impact structure where  geologists are fairly happy to identify a peak ring. Just a reminder - the target location here consisted of about 3kms of Mesozoic sediments beneath which lay (older) crystalline granitic basement rocks. The authors modeled the impact and concluded that during the impact, rocks from as deep as 8 -10kms – which is well into the crystalline basement - ended up in a central uplift. This uplift then collapsed down and outwards, with the displaced material traveling outwards to over-ride material traveling inwards from the collapsing rim, which consisted on Mesozoic sediments from closer to the surface. As result pretty near to that predicted for Schrödinger. The actual borehole revealed that in the peak ring older granitic basement rocks exhibiting all the usual impact related deformations and alterations lay on top of the younger Mesozoic sediments just as predicted in the collapsing central uplift version of events – a fairly convincing indication that peak rings originate from a collapsing central peak.

On the Earth peak rings form in craters ~30km in diameter due to the effect of increased gravity on the impact process, on the Moon the transition to peak rings takes place at  ~227km diameter (The transition from complex crater to peak-ring basin on the Moon: New observations from the Lunar Orbiter Laser Altimeter (LOLA) instrument. Baker et.al, 2010, Icarus 214,). Unfortunately lunar examples of Chicxulub equivalents, with only peak rings and no central peak structures, seem to be best preserved on the far side, with only Grimaldi (but the peak ring is buried), Milne, Planck, Schrödinger and the Schiller–Zucchius basin being near side targets and observable at times of suitable libration.

Sorry for the long winded reply!

Wow. I appreciate the information.