My friend and I are preparing for solar observation of the Mercury transit later this year, and now I'm working on a backup plan. Presently, we both have Equatorial mounts. He has a small 4"-or-so reflector with a broadband solar filter. I have a Lunt LS60. We plan to set up the night before, gain accurate polar alignment, and proceed to image the transit in the morning (I'll figure out the 'where' later! hah)

Our backup plan, however, involves driving at the last minute to find a clear site with view of the sun. This makes it so my Nexstar SE Mount (Alt/AZ) is far easier to set up and accurately track the sun for the duration of the transit.

So, my question -- what sort of adapters/plates/mounts/etc would be required to mount both the 4" reflector and my Lunt LS60 to the Nexstar SE Mount, and is it even worth it (vs a very rough polar align and the GEM mounts). If I need to calculate weight in order to make a useful determination, let me know and I'll get my friend to weigh his equipment (He's imaging with a DSLR, I'll be imaging with an ASI174).

I am also reading about a process that involves dangling a string, determining the angle of the shadow, and knowledge of the Sun's azimuth to obtain polar alignment during daylight, but so far I've only read information and it doesn't quite click yet -- I'll search for videos that explain this concept soon. My guess is we'd get superior imaging if we use the GEM mounts w/ accurate polar alignment, but I'm not sure.

Any advice at all is appreciated! Thanks!

The guess from this non-imager is a rough polar alignment will be fine for imaging the sun during the transit since you'll both me taking millisecond frames.  Not much risk of "trailing" when your exposure is 100 ms or so.

I thought about that, but the "main" issue is wanting to be as hands-off as possible, taking pictures every 30 seconds or so without having to constantly adjust the mount.

Another EQ mount benefit is no field rotation.  Over the 6 hours of the transit Mercury is going to look like it is doing a 90 degree turn  (6 hours*15 degree/hour).

I use an SE for my Lunt 60 on a regular basis. Handles it just fine. I use solar system align and align on the sun itself. You have to toggle that on in the Setup menu.

I'm sure it would handle a 4" reflector as long as it isn't really long. Of course, trying to mount them both on the SE at the same time would be difficult and not advisable.

Oh, thanks, I didn't realize its capacity was only 12lbs! I guess we'll just stick to practicing polar alignment during the day.

Thanks for the guidance!

Hang a plumbob and at the determined time, mark the shadow of the string. True N/S.
I used a tripod.

Hang a plumbob and at the determined time, mark the shadow of the string. True N/S.
I used a tripod.

Good idea, but that won't help in this case. The transit is in the morning.

If you want to use a vertical string at some other time, get a protractor, set an app like stellarium to your present laitiude and longitude, time a minute or so in the future, and read the az and el of the sun. Place the protractor horizontally so that the shadow of the string crosses both the center of the protractor and the the sun's predicted azimuth on the degree scale at about the time you selected (but make sure you're reading the correct set of numbers since most protractors have two sets, increasing from 0 to 180 in opposite directions).

For instance, from where I am in the central US, on Nov 11 at exactly 8 AM CST, the sun will be at azimuth 121° in the southeast, so the shadow will be going northwest, 121° from due south and 59° (180° - 121°) from due north. If you do this correctly, the base of the protractor will be aligned N-S. Practice this a few mornings ahead of time so you can do it quickly, and can also do a reality check to see if you did it correctly. 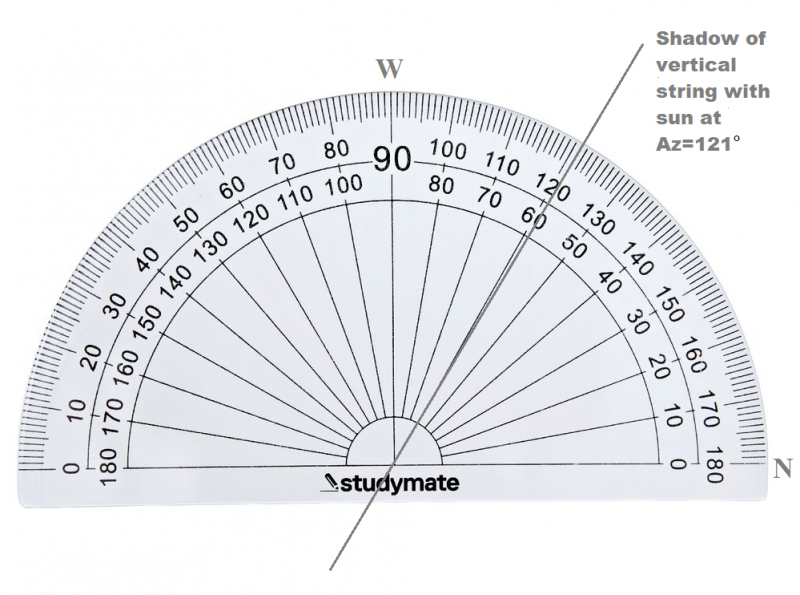 Failing that, find your local magnetic declination and, using a compass, identify a landmark, preferably in the distance (or hammer in a stake), that's close to true north of you (or, I suppose, south would work, too, in a pinch) and use an inclinometer to set the polar axis to your latitude. Your mount and tripod probably have a fair amount of iron in them, so do this without that  equipment or cars too close.

Where are you (in general)?

You don't need to do all that stuff. The SE can align on the sun!!

It will be very difficult to mount two OTAs on a NexStar SE due to the low payload capacity.  Weigh all your equipment (with cameras and accessories, including Solar filters) and make sure it is less than the payload capacity.

You will probably only be able to use one OTA on the SE without overloading it.  However, you don't need a very large aperture (though it helps).  My backup plan is to piggyback a DSLR camera with a 500-mm f/6.3 (500/79) mirror lens (and Baader AstroSolar filter).  I have seen a number of excellent photos of Mercury with this particular setup.  You can do this on a fixed tripod as well as on a tracking mount.  If you are only doing still photos and short video clips, you don't technically need a tracking mount.

You don't need to do all that stuff. The SE can align on the sun!!

The SE alone isn't adequate for what he wants to do, so he's looking for a way to get the eq. reasonably well polar aligned without any stars visible (except the obvious one).

...  My backup plan is to piggyback a DSLR camera with a 500-mm f/6.3 (500/79) mirror lens (and Baader AstroSolar filter).  I have seen a number of excellent photos of Mercury with this particular setup.  You can do this on a fixed tripod as well as on a tracking mount.  If you are only doing still photos and short video clips, you don't technically need a tracking mount.

While a fixed tripod would work to photograph the transit, it doesn't meet this criterion:

... the "main" issue is wanting to be as hands-off as possible, taking pictures every 30 seconds or so without having to constantly adjust the mount.

On the other hand, "going to plan B" often means you have to give something up. Here it is likely to be "hands-off", and will need more attention than would be needed with the well-aligned mount you would have with "Plan A". Still, you may be able to polar align well enough that adjustments are not "constantly" needed.

I've had good luck aligning an AVX by leveling the mount base, adjusting the PA latitude angle using an accurate inclinometer and pointing the PA as close to true north as practical, setting the mount to its index marks as accurately as possible, accurately entering time, date, and location, starting a Solar-System alignment on the sun, then, after it finishes its slew to where it thinks the sun is, adjusting the azimuth knobs to bring the sun as close to centered as possible before using the slew buttons for final centering; this works best when the sun is low in the sky in morning or evening, but will work as described only if your mount allows selecting the sun as an alignment target. Try it!

My recommendation... practice. Starting now! See what daytime polar-alignment techniques are easiest and work most reliably, and which aren't worth messing with.

My advice is if you have to choose between a 100-mm white-light Newtonian and a 60-mm hydrogen-alpha refractor, the larger aperture is going to provide the better view.  I have heard mixed reports that the hydrogen-alpha background might be visually distracting for the Mercury transit, and a white-light filter might produce better photographic results, especially if it has a larger aperture.

If you want a Plan C, use a point-and-shoot camera and image the transit afocally in the Newtonian reflector.  That is my Plan C at least.

Remember to do at least one trial run before the transit to make sure your Plan A, Plan B, and Plan C all work.  A small Newtonian is not going to work with a DSLR camera without a Barlow, and even then it may still not work, so check everything beforehand.

Which do you like better? (they are not my pictures)

I'll vote for my Hydrogen Alpha LS50THa over a StarBlast4.5 with white light filter any day.

Which do you like better? (they are not my pictures)

I'll vote for my Hydrogen Alpha LS50THa over a StarBlast4.5 with white light filter any day.

It's a matter of personal preference of course.  I like the white light better.  I think the main issue is that the white-light filter provides more contrast for a black disc on a white background.  If Mercury had a thick enough atmosphere, you would probably want to image that in white light with the maximum amount of contrast (and aperture) possible.  But since Mercury doesn't have a (significant) atmosphere, it's mostly just a matter of personal aesthetics for imaging the transit in an amateur telescope.  A neutral-density filter however would also allow near-infrared and near-ultraviolet images with a monochrome camera and the proper filters, so you have more wavelengths accessible than in a monochromatic hydrogen-alpha telescope.