Advice on upgrading my telescope

Let me introduce myself. I'm Peter, a 19 year old boy from Belgium who has been passioned with stargazing since the beginning of my yet short life. I've started out with a small telescope kit which was around $50 around the age of 10 (got it from christmas).

At 13 years old, I considered buying a more "serious" scope so I went for the celestron LCM114 computerized telescope which served well for observing the gas giants and the moon, even when the light pollution caused interference. In the present I'm still using this scope but after seeing Saturn and Jupiter, I always wanted to see more like the andromeda galaxy, the whirlpool galaxy (M51) and surely like ever young kid, the orion nebula. It's a pitty that the scope that I own right now isn't capeable of gathering enough light so I can see those objects. So here comes my question to you guys.

Which scopes would you guys recommend upgrading too so I can perform some deepsky observations with the naked eye as well with a camera (astrophotography)?

My budget is lying around $1300, which is in my opinion a decent amount for a new scope.

I would love to hear the advice from you guys

It’s a great time to get into this hobby in a more serious manner.

if possible, find a local astronomy group to link up with.

that will give you a chance to check out other scope types and you can sometimes  find a good deal on a used scope that someone is trying to sell so they can upgrade.

You will definitely find others more than willing to show their systems and that will be invaluable in letting you decide on a next system.

Dag Pieter!
In Belgium you rather need a radiotelescope or a X-ray one. Just remembering the winter months when I was there ...

Your telescope should be able to gather enough light to see these objects! They can be actually seen with binoculars. My advices

As said, try to join a local community of astronomers. You will learn and see more.

Practice more star hoping with what you have. It my give you larger fields, so it's easier. (Andromeda actually needs a very large field!)

If you decide to buy something (why not!), Think about a visual equipment. Photography needs special equipment and higher end mounts, all that costs money. Takes much longer to set up and much longer sessions for a single object. In the time you prepare that and get your first frustrations of the night you can set up and see visually many objects and enjoy the sky a lot (many times sessions are short: work, family, commitments, good weather window...)

A quick set up visual equipment can be used for some planetary photography too. Something like a Celestron nexstar 6 or 8SE (or similar brands with goto) can please you a lot. The tube can be used in the future with a GEM the day you decide to tackle photography more seriously. For visual stay with an alt-az mount.

I went recently with a Celestron evolution 8"hd. I couldn't be happier. I also bought second hand a 80mm ED refractor for larger fields, it's also awesome. Planets are smaller with the refractor, but the high quality of each mm allows high power.

Another advise is that you account in your plan a budget for some basic accessories and good eyepieces. A good, comprehensive book is "The backyard astronomer". Slightly outdated regarding equipment, but not much and very useful in general.

Last one; look for second hand, even better if it's local

take a look at this site for the sky and telescope magazine.

It will give you a list of registered astronomy groups by country.

I agree on finding a club. Our club here lends out equipment of all types for a month or two at a time. I would shoot for an 8” Nextstar. It would likely have to be used. But for DSO 8” would be really helpful. If you are technically inclined then the equatorial mount, VX. Or the Evolution. I got the evolution first for visual observing. The Evolution is simple, light weight and uncomplicated. The VX is an equatorial so there are more pieces and a bit more complicated. Both are computerized. That would be my choice.

Finding a club is a great idea. Our club loans telescopes, and many of us are older folks with too many telescopes, so you can often find used telescopes for very good prices. There are many sites to read reviews, scoperevies.com is one of my favorites.

For visual observing a dobsonian telescope is a great choice. For photography a small refractor on an equatorial mount may be the best choice. I paid the taxes and fees to import a TS80 f/6 triplet from Teleskop Express of Munich. I'll attach a picture of M42 I made with this scope.

It would be a compromise choice and it would be heavy and large and complicated, but a 6 or 8 inch SCT on an AVX mount might do what you want. If you can find a club they can perhaps help you find a good used one in your price range. 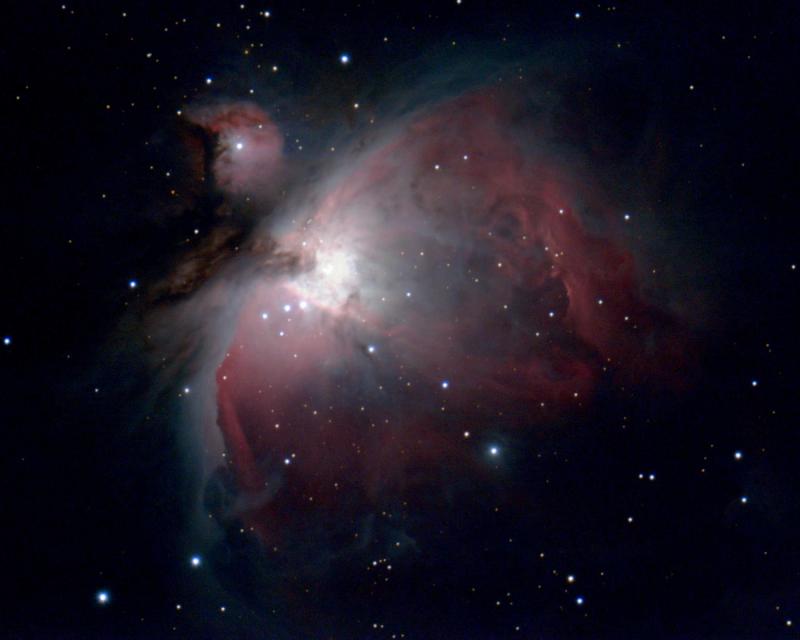