The September 2019 Challenge is now open. The target is IC 1805 The Heart Nebula, this can also include the Soul Nebula or any part of either. It up to you how wide or how narrow you want to image on this target.  To reduce the number of stickies, please submit your entry to this thread.

To increase participation over such a diverse group, the winner will be selected by random drawing. Please feel free to start a thread requesting guidance on your entry prior to submitting it, the whole purpose of this challenge is to learn and compare on a common target. Entries must be submitted by midnight eastern time on September 30, and I will try to announce the winner early in October. 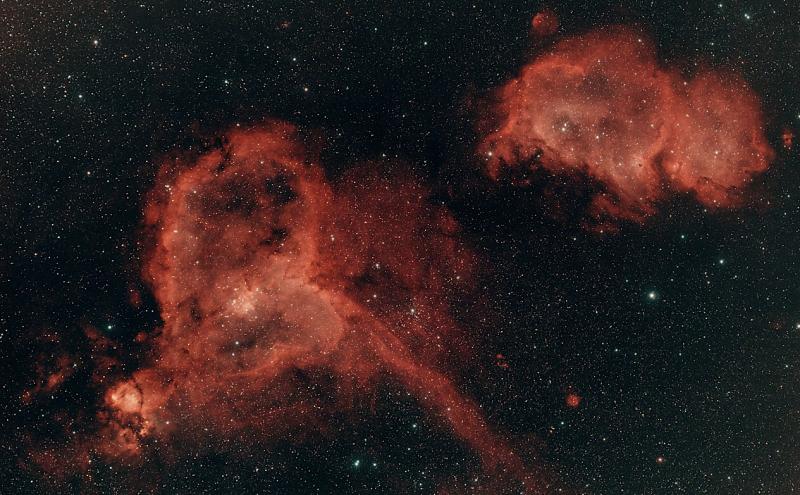 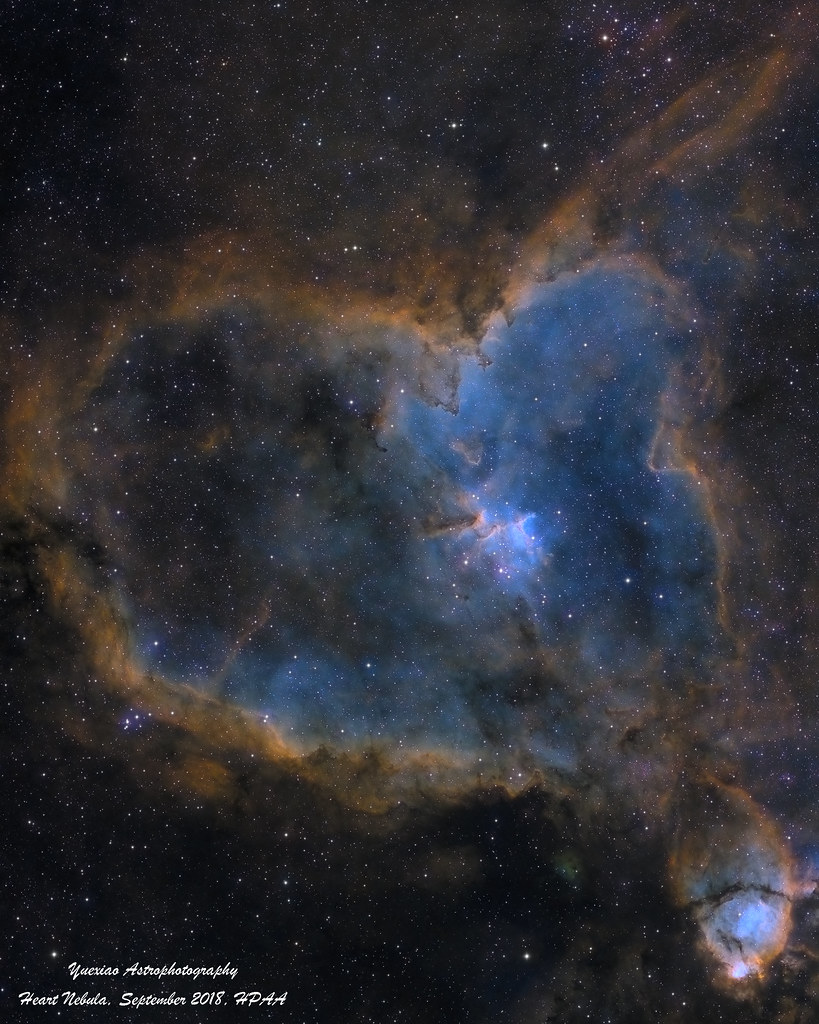 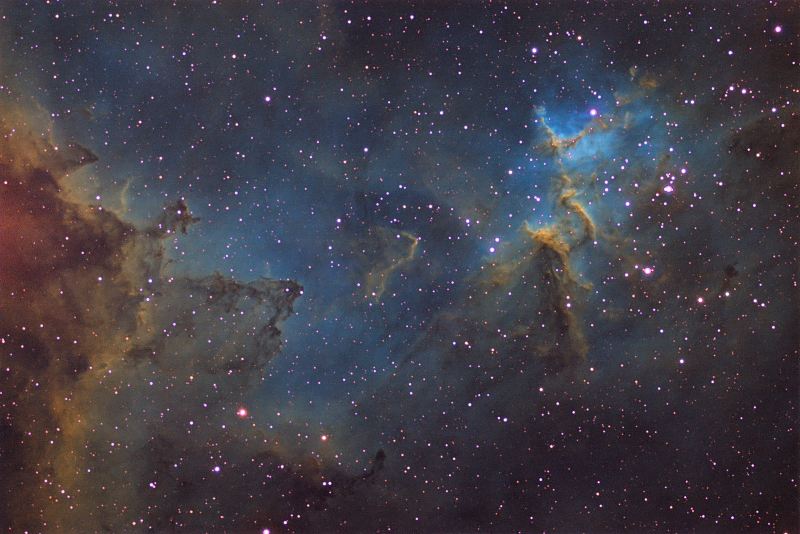 I spent most of last month trying to get an image for the August Challenge, and finally got a halfway decent image the day after the winner was announced lol!

SO...  I am prematurely tossing this one in the ring.  It is my third ever image.  I shot it a couple nights ago, and it was my first successful night with 10 minute subs.  My auto focuser is "gone" as I await my new Starlight assy, so I had to try and hit focus and leave it there for the night.

It would appear my setup is not wide enough for this subject. I think I will try my first mosaic to see if I can pull it off.

Processing:  I did my first PI integration.  I found a tutorial (in German) that got me through integrating the RGB and then the narrowband.  I KNOW my colors are off, the background is crap (too dark) and it seems that my flats and darks were ignored as I have both vignetting and amp glow in the result.

I am going to post this in one of the regular forums to see if I can learn the proper way to post process this image.  In the meantime, here it is!

May I suggest a small trick.
- Invert the image
-Use SCNR to remove all green
-Invert back to normal
-Observe the difference

Here is my rendition of the Heart nebula (IC1805), widefield with Fishhead nebula (IC 1795) in natural colors: 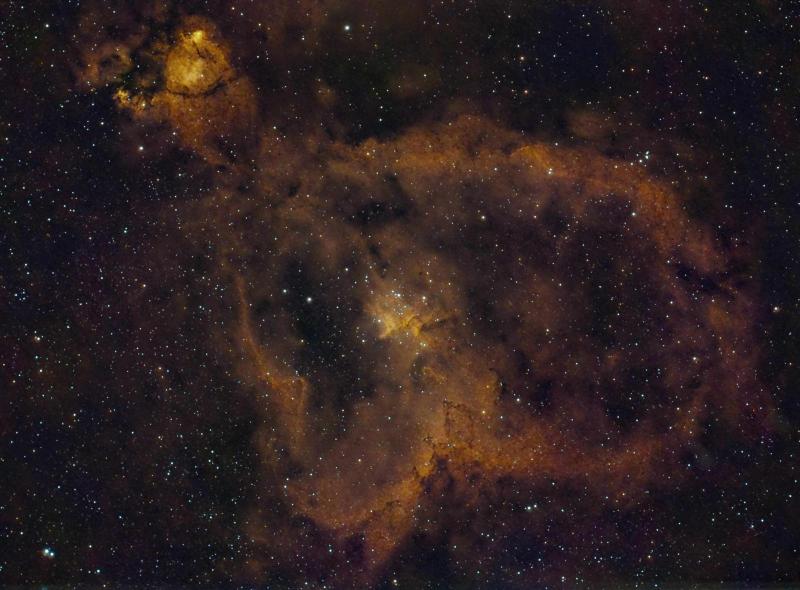 Location : My backyard in S. Texas,

The image was processed using APP (Astro Pixel Processor) and StarTools with normal RGB processing workflow. That gives me the natural color palette. The red is dominant because of strong HA emissions, which has been slightly toned down in saturation to help the central star cluster Melotte 15 to show. So, the image lacks the "pop" that a false color Hubble palette might give. Nevertheless, I was happy to get good results. Hope you guys enjoy it too ..... Anil

I decided to try the Hubble palette this time around.  I still have a long way to go in planning and technique, and building a mosaic is a bit beyond me at this point so my image is limited in extent and the camera rotation probably could have been better.  The images where taken from my backyard on August 31st, September 1-4, and 7-9.  I used Astronomik 6 nm HA, SII, and OIII filters to produce 360 images,120 images per filter, 90 seconds per exposure, 9 hours total exposure time. Equipment: ASI1600MM Pro; modified GSO 10" f4 Newtonian; G11T mount, 70mm Astromania Guidescope with ASI290MM.  Captured using SGP/PHD2, processed in PixInsight, conversion to jpg using Photoshop. 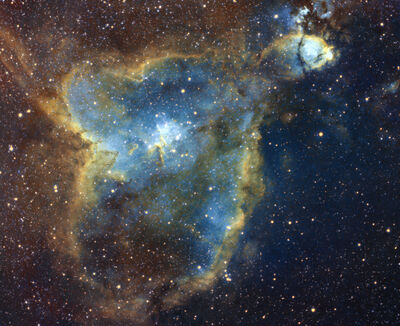 For a change, here's my entry.  I had first intended a mosaic, but with my gear that would have had to be at least a 3x2, in RGB 18 different frames (and at least 100 subs for each...).  Might still do that, but not before end September :o

120 45s frames for each color, taken unguided with random 10" dithers every 3 frames.

Had some issues with the color - not sure if that is the lens or the new filters.  Guess one should always only change one thing at a time.... 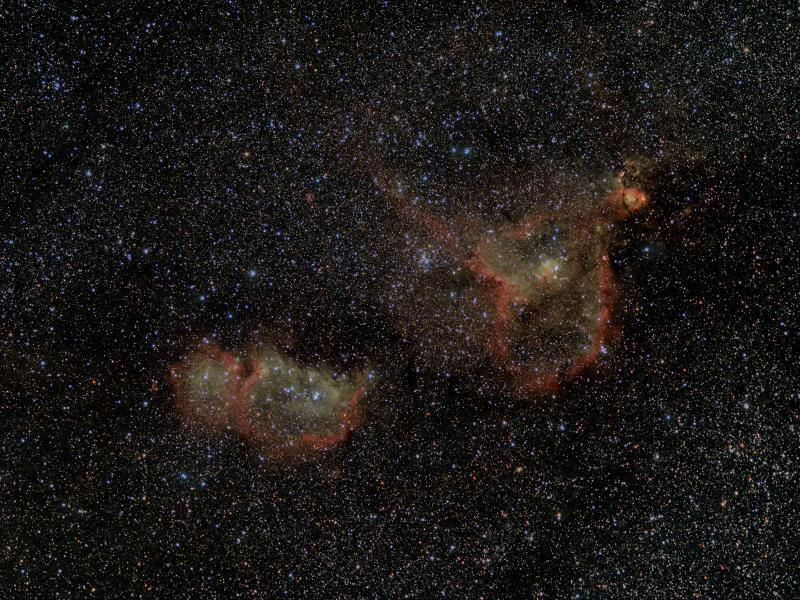 The Heart Nebula in “bicolour” with IDAS NB1 filter.

This was taken over two nights for a total of 3h 8m. I used an IDAS NB1 filter which has two bands centred around the Ha and OIII signals. The Ha band is 20nm wide and the OIII band is 32nm wide, so not really a narrowband bicolour image.

The stars were controlled using Starnet++  and combining the starless image with the original image. 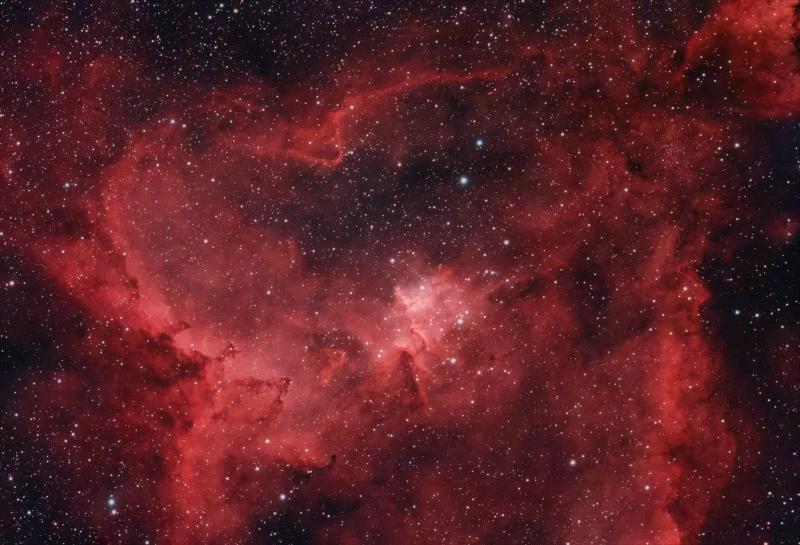 This is a challenge and a half to process due to the star field. I need an l-enhance to give it a good go. 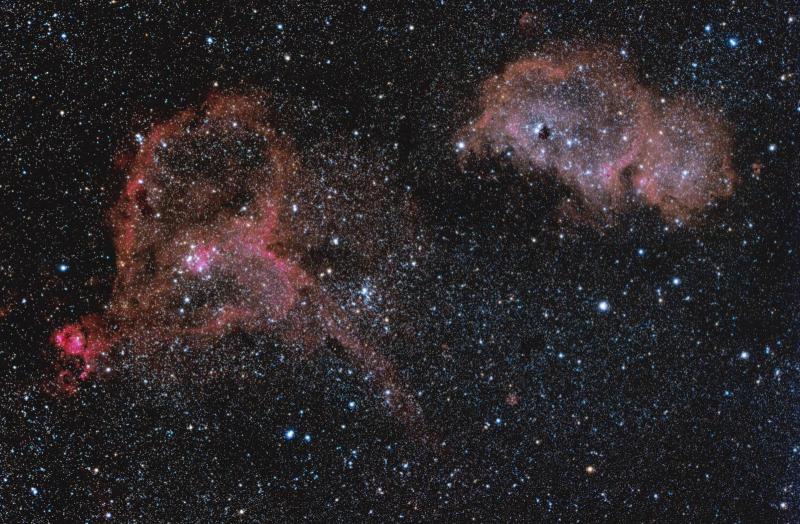 Ok, so this target isn't exactly ideal for my imaging train, nor local weather alignment with the Moon's cycle.  But, here's what I got.

This is focused on Melotte 15, the central open cluster within the Heart Nebula, cropped only to get rid of stacking and alignment artifacts.  First Moonless opportunity to image was during a Star Party on 9/21 under clear Bortle 4 skies.  As the crowd started to thin, I fired up the autoguider, threw on the camera and grabbed about 26 minutes of 20 second subs before having to pack up.  No time for darks, and with the disassembly required for travel, couldn't get flats the next day either.  Stacked what I had in Sequator, using darks from last month.  Not bad - actually saw some of the nebula's glow - but it of course needed more time.  Then the weather turned.

Three days later was a short window in the cloud cover, so I grabbed another hundred subs and a set of darks from home (Bortle 5/6), and flats the next day.  The auto guiding system failed (tentatively traced to a bad USB cable connection), so I just ran unguided and without a plate-solved alignment (plate solving uses the guide camera).  Manually weeded out the worst of the result and stacked the rest (24 minutes worth) in DSS.  Looked similar to the earlier session, though with more walking noise (typical with DSS over Sequator).  I expect this isn't the best idea, but I then took the two stacks and mushed them together in Sequator because it's really quick and both stacks were of similar integration time.  Processed the result in StarTools.

Details on astrobin, but summary is 45 2 mins subs. 80mm ES Carbon Fiber APO, ASI1600MC and guided with the ASIAir and processed in PixInsight. 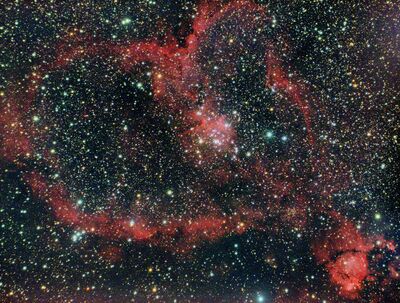 I'm south of the equator, so this one is very low on my horizon. Atmospheric crud and LP made this a tough target. I'm glad I managed to get something. 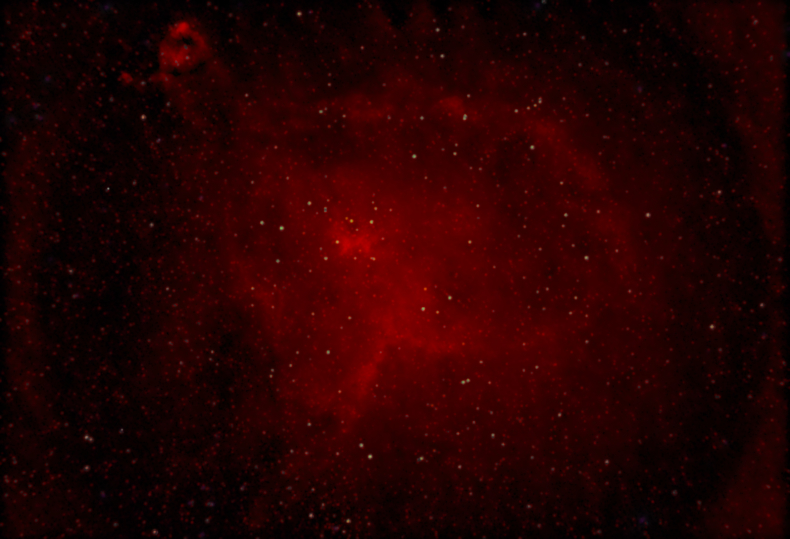 Shot this last night, just getting in under the wire! 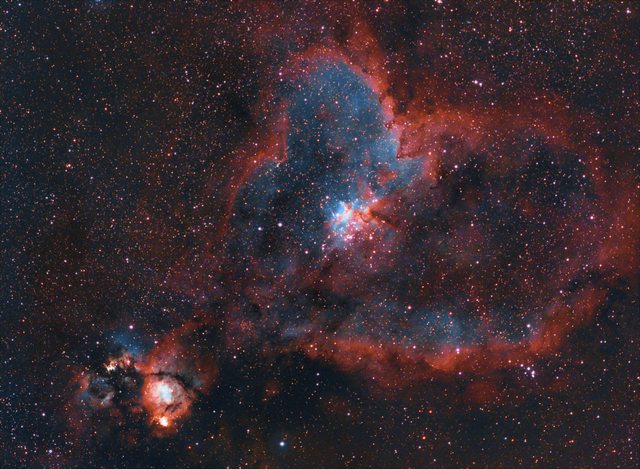 And the winner for this month is syxbach post #3! Congrats! A really wonderful image with great colors.

I will post next months target as soon as syxbach lets me know what the target is.

October's Imaging Challenge is up! The target is NGC 281 The Pacman Nebula!