This coming Wednesday, Sept 4th the sunrise terminator will have a colongitude of 22*E at 0h UT. The Tranquilitatus craters Aldrin, Armstrong and Collins will be very visible close to the terminator.

And the domes in the Mare will have low incidence sunlight, so take a look. 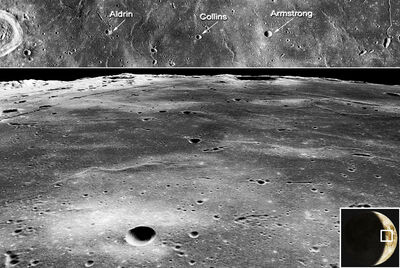 Nice! That Tranquillity Base neighborhood looks rougher than they possibly thought.

Your bottom image looks westward, in the order of Armstrong-Collins-Aldrin?

Good notice Bill.  Just for clarity, the phase with the morning terminator at 22E will occur at 00:00UT on September 5, but this corresponds to evening viewing on September 4 for many people here on the forum, as you note.  In addition to the Sea of Tranquility, the other notable aspect of the Moon at this time is that there is a strong libration to the east and south.  On Sept. 5 at 00:00UT, the libration will be 7.9E and -4.9S (geocentric values).  This will make a good time to view features on the eastern limb, such as Mare Marginis, Smythii, and Australe.  Mare Humboldtianum will also be visible to the north, although not in its entirely because the southernly libration is not as optimal for this region.  Features near the South Pole will also be favorably positioned, somewhat similar to that seen in my post from last year, although with a slightly weaker southernly libration, and an 18 degree difference in colongitude.  The only thing working against observers situated north of the tropics is that at this time of year, the Moon approaches First Quarter at a low declination (-16 degrees on Sept. 5), so it will not reach very high elevations above the horizon (reverse is true for southern hemisphere observers!).  But if skies are clear, it's definitely worth a look.