After seeing the extended faint ring around M57 and finding the inspiring website, http://www.deepsky-v...ojekte/Halo.htm, I decided to go for M27. I tried for a couple of average nights but it was only after a night of fantastic 21.85 skies that I was able to see the hairy projections popping out of the bright arcs and the outer shells clearly with an OIII filter at relatively low power. There is also beautiful glowing Milky Way variability in the background. 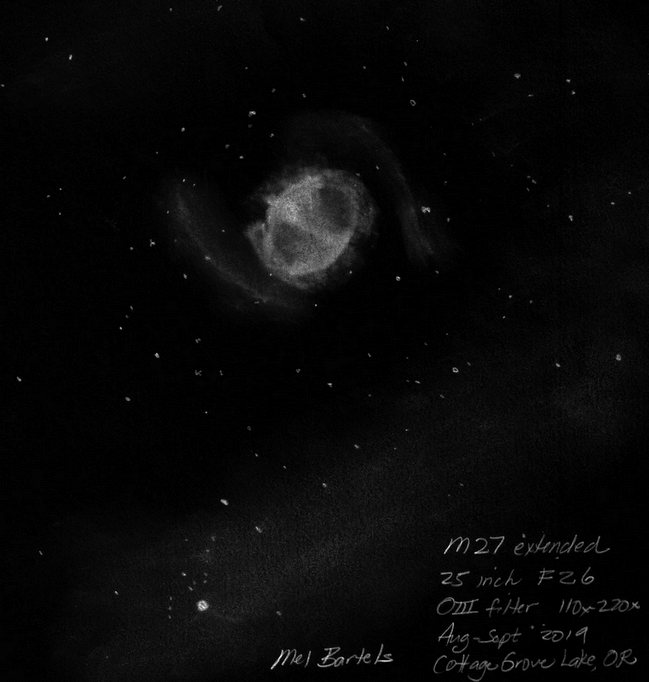 Mel, another great impression of what can be seen with experienced eyes and rich field telescope. Do you go to Cottage Grove Lake because of dark skies or short travel time - maybe both? Likely there are darker skies with longer travel times on secondary roads. Do you post your drawings in a gallery or website somewhere?

Russ, I live on a hillside overlooking the lake. The dark sky advantage to my home is that there is nothing to the west/east and most importantly south of me. On the best of nights I can get to 21.8 skies. Because I can 'just step outside' I have easy access to good sky conditions whenever the sky gods grant it. Mel Bartels

And my drawings are here: https://www.bbastrod...m/drawings.html

Very nice sketch Mel with the extra milky way in the same FOV.

And my drawings are here: https://www.bbastrod...m/drawings.html

Thanks, Mel. Those are most interesting drawings. No doubt your eye/brain combo has learned a lot in gaining the skills displayed. I'm just beginning to understand how much more a person who sketches what is seen really must observe, and not just a quick glance. Concentrating on what is seen so that you can assemble a drawing demands focusing one's perceptive powers to see relationships, colors and diffuse elements.

As yet my only drawings have been of star clusters. So that only requires placing stars where they are seen and deciding how big to  make the dot. Hopefully later I can learn the skills needed for nebulous subjects.

I really enjoyed reading your take on the progression of techniques for visual compared to photographic observations.

I for one would definitely give up the high-tech inventions in exchange for dark skies. This would be especially tempting if I had a greater degree of youthful flexibility, eyesight and stamina. But one modern phenomenon I really enjoy is Cloudy Nights, which has helped me escape from my "silo". Still 99% of the time when I'm under stars, I'm alone except for wildlife or neighborhood cats. While many friends express a desire to look through the telescope, most aren't able to join in for various reasons. It's not something I can make definite plans for an observing party. All too often here on the Oregon coast, after sunset the wind brings fog off the ocean from the northwest. So it's a last minute invitation - "can you come over, it looks like it's going to remain clear tonight".

Another hindrance is we are all so busy with other activities, such as family responsibilities. Special events in the night sky often happen at inconvenient times. The Gemini meteor shower happens in late Fall, when Pacific NW weather doesn't usually cooperate. Yet 2 years ago I finally observed the year's best meteors over two full nights - quite spectacular. Yes, it was inconvenient to stay up all night for two  nights in a row. This was especially challenging since I had to drive 1-1/2 hours to my dark site. More often now I observe from home and make the best of conditions. At least I can see the Summer Milky Way overhead on a clear night. Others have it much worse for light pollution. Still I often force myself to observe on the only clear night in weeks, even if I'm inconveniently tired from the daytime activities.

Mel, I hadn't planned on such a rambling reply. But one another subject comes to mind. Have you ever considered arranging for commercial versions of your rich field telescopes? It must take many hours just for the mirror. But seeing the results you are enjoying with sub-f/3 mirrors, perhaps there would be enough interest warrant a small production run or even special order one-offs. I see you have employed smaller RFTs which could be of interest to some visual observers. Realistically though such an endeavor wouldn't be a big money-maker for the producer. Also it would leave less energy available for more enjoyable activities like sketching IFNs. But it was just a thought.

I hope you continue to enjoy success in observing and sketching celestial objects seldom seen by others.

I've come to see that visual observing particularly sketching is more similar to image processing (addictive and interesting in its own right) than I had realized.

By selecting for telescope, eyepiece, filter, skies, and by honing observation skills through sketching and the process of sketching (worth a whole chapter if not book in itself), we 'process' the image to tell a story (emphasizing faint outer reaches or brilliant cores or star patterns or colors) just like digital imagers process their data with a narrative in mind (ex: narrowband imaging to bring out types of clouds).

For example, I just did a quick search of M27 sketches on CN in the past couple of years. Beautiful sketches and uniquely individual sketches where each one is telling the story of the observer and telescope and eyepiece and filter and sky conditions and what the observer chose to concentrate on.

Wow, very nice sketch.  It definitely makes me want to revisit this object and give it another go