As I was imaging the moon last night,  the Sydney to Brisbane peak hour was on and all but one was just missing by a hair.

The moon rose just enough to get the last aircraft.

Afocal of screenshot. Should be flying from right to left.

Howw far away from the scope was the jet?  Great shot!

Howw far away from the scope was the jet?  Great shot!

I was using SharpCap quickcapture, theASI174 was at 162fps so I was only getting

Good demo of having something terrestrial and Lunar both in focus!!!!!!!

It's an unusual, but great shot, however, having it flipped in the vertical for my northern hemispheric view, I couldn't help re-orientating it (I hope you won't mind my manipulating it) to show how it might look from such a perspective (we are, obviously, looking at the 'under-jet' of it). 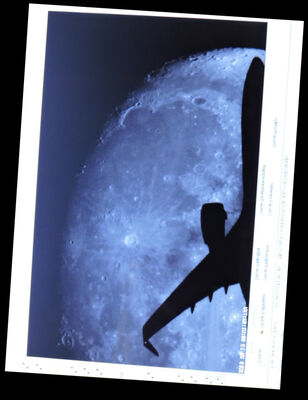 That's a really great image!  I'm interested to know if you have determined which flight this was, and where you got your distance value of 8km?  Looking at the flights from Sydney to Brisbane that landed after 8:00pm local time, I found this list from the website Flightaware.  Whether your plane is on this list would depend on whether it was actually one of the Sydney to Brisbane flights of course.

The arrival times listed above aren't accurate, but after clicking on the individual flights I could get more detailed info, including time stamped GPS data in approximately 30s increments for the duration of each flight.  Very interesting.

Anyway, using the Earth-Moon distance at the time of your image, we can calibrate the image scale as you presented above at about 2.25"/px by making some measurements of known lunar features near the sub-Earth point.  The plane can then be sized, although there is considerable inaccuracy in deciding where to measure and because of perspective distortion.  I don't know whether this is an Airbus A320 or 737-800, despite looking at some images, but you probably know better than me.  Anyway, I reasoned that the diameter of the engine cowling would be fairly free from distortion, and this value is about 2.44m for the 737-800, and very similar for the Airbus.  Doing the trigonometry then places the aircraft at about 5200m line of sight and the altitude at about 5000m (since the Moon was high in the sky, these values are similar) but with some significant room for error.  This would be an altitude of a bit over 16,000 feet.

Looking at the flight data, nothing matches perfectly unfortunately, probably due to some errors in my estimates, as well as perhaps inaccuracies in the GPS data on that free website (altitude is often fairly inaccurate).  But the closest match was Virgin Australia #977, which was located at the indicated position below at the time your image was taken (within a few seconds), and at that time had a reported altitude of 12,225 feet (34% error from my estimate, but errors from measurement as well as GPS altitude would compound).  I don't know if this makes any sense based on your location or not.  There are a couple of other flights possibilities, although those aircraft were located about 80km further south at the time your image was taken, so that might make sense if you were imaging farther away.  Those aircraft were about 25,000 feet altitude, though, so that would mean my estimates were off by about 50% in the other direction, but I suppose that's possible.  That altitude would agree with your estimate of 8km distance line of sight however, but would require you to have been imaging from a considerable distance to the south in the map above.  And the aircraft would have been over the land, not the water, which would be a good piece of information to clear things up.

And of course, maybe the aircraft isn't even on my list if it's a different flight route!  And flight #977 could be crossed off the list if the aircraft in your image is not a 737-800, but I'm not confident on making that call.  But I'd be interested to hear if you have more information.  Once again, nice image! 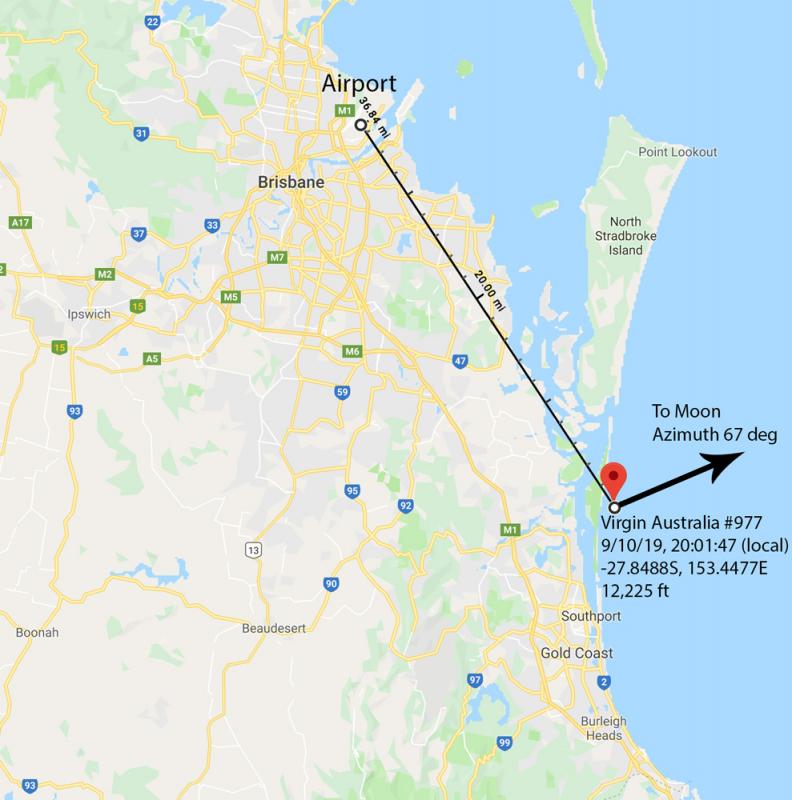 Edit: As shown in the post below, I made an error reading the time stamp in the image.  This changes the list of possible flights, but other parts of the analysis remain valid (albeit for the wrong time) so I'm leaving the post as written above.  This will make sense after reading the posts below.

I also fly this area and I know that flight path.

I also fly this area and I know that flight path.

That makes perfect sense!  Thanks.  Somehow I missed the +10UT time aspect.  So, do you know the aircraft type?  Since the image can be scaled accurately by the Moon, the line of sight distance to the aircraft would be determined only by the physical dimensions of something that could be measured accurately from your image.  I had assumed it was a 737, but I could very easily be wrong there.  My estimate of 5200m distance to the plane is based solely on the image measurement, and so that would not change with the time error (but would still be subject to other errors in the measurement itself).  What would change, however, is the estimated altitude of the aircraft, because at the correct time the Moon was much lower, at only 48 degrees or so above the local horizon, and due east.  This would put the aircraft at about 3864m, or 12,677 feet, and a ground track several km inland from the coast.  This seems like a reasonable profile for aircraft approaching Brisbane from Sydney along your region of the coast, based upon looking at similar flights.  Unfortunately, I don't have a set of flight data to check against, because the free websites only store a day or two of history.  In any event, thanks for sharing the nice image!

It's an unusual, but great shot, however, having it flipped in the vertical for my northern hemispheric view, I couldn't help re-orientating it (I hope you won't mind my manipulating it) to show how it might look from such a perspective (we are, obviously, looking at the 'under-jet' of it).

>>> John Moore: Craters of the Near Side Moon (662 images of craters discussed, over 5000 additional sub-names referenced, latitudes/longitudes sizes included).

Say, nice book. Just ordered it. I don't look at the Moon a whole bunch, but when I do the very first thing I want to know is, "What's THAT crater??", and I never have a good enough book or map.

Many thanks, Bob...hopefully it proves useful (it's a heavy tome, so don't drop it

Just by chance I needed another counterweight too! Perfect! I'll hang it on a rope like the old phone books.