Is bigger ACTUALLY all that much better? Upgrade from a 10” SCT to a 16” Dobsonian worth it?

55 replies to this topic

I think the simulator in the OP is very realistic for 250 mm vs. 400 mm (object - M51, no eyepiece chosen for the "detailed" step - just the first-page dialog). Actually both images are more like what you can pull out with prolonged study rather than what immediately jumps out of the eyepiece, which too is praise for the simulator. To my mind the simulated images show a huge difference. If to yours it's not so, that's what you will have to go with. I would never contend that the title question has a universal answer, apart from the perception of the specific observer. I haven't had a 10, but I am interpolating between 7 and 12 (LX200 both), which I used a lot, and compare it with my old 16 Dob.

Wow, Ivan!  You must observe under a ton of light pollution.

Here is a sketch from the owner of an 8" which isn't too far from what you can see with 8".

It will take a dark sky, though.

As for what I'd expect in a dark sky with 16", though, it would look like this:

Don, you must be looking at the simulator image with bright light shining on a dim screen. Or some other technical mishap. I meant views under something like mag 21.6 from square arcsecond (some might call it "Bortle 2"). Since OP said "quite dark". The sketches you linked are, of course, representative of 8 and 16 inches, with the former showing a bit less than the simulator shows me when set to 250 mm.

Here are the images I see.

The first is how the 8" simulator appears on my screen. (I dimly see the cores and nothing else)

The 2nd is after I adjusted contrast greatly (over 400% brighter).

That simulator, as it "works" on my laptop, is very inaccurate when compared to my visual views in my actual night sky.

For example, this is M31 and family as observed with a 1-inch aperture: 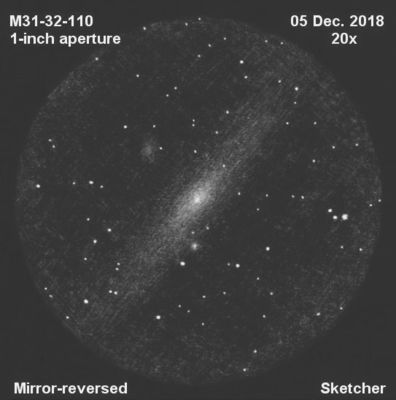 The simulator, as it works on my laptop, doesn't show as much of the outer reaches of M31 -- not even when significantly more aperture is dialed in.

I took a look at M31 and M51 tonight with 20x80 binoculars.  M31 stretched beyond the edges of the 3-degree binocular field , a truly majestic sight!  M110 was quite large and obvious.  The extended glow from the (unresolved) arms of M51 made M51 appear much larger than just the core region that primarily shows in the simulator.  Due to seeing light from M51's spiral arms, NGC 5195 appeared close enough to M51 to be a part of M51 -- as seen with the binoculars -- a view quite different from the two widely separated cores (with mostly empty space in between) that I see in the simulation.

Of course, the difficulty might be due more to the differences in different display screens than it is due to the simulator; but regardless, for me and my laptop, the simulator does not provide a very accurate simulation for the views I can see in my actual sky.

Another possibility is that the simulation is for a more light-polluted sky than what some of us enjoy.

The bottom line is that there are many variables that go into what a person will see of any given object under their actual night skies.  Aperture is only one of those variables; and it's not always the one of the greatest significance.

I went from a 10" to a 16" and it was amazing (and wound up acquiring a 12 later). 16" of aperture will not disappoint compared with 10. One thing though-- it is much more difficult to produce a 16" mirror with a good figure, compared with an 8-12" mirror. The mass produced mirrors in the 8-12" range seem to be consistently good. My 16" mass produced mirror is pretty decent, but I'm going to need to play around with an aperture mask since the figure on mine seems to have a pretty bad turned down edge/overcorrection, which is hurting my scopes resolving power and contrast. If my suspicions are correct, I'll lose some aperture, but get a decent improvement in performance at high magnification. I partially expected this with a large mass produced mirror and even if i needed to lose an inch of aperture, it is still gathering loads more light.

Another comparison, my 12" f/5 mirror seems to have a better figure than my 16" f/4.5 mirror and may be able to hit higher magnifications-- my 12" displays similar, clear, concentric diffraction patterns for inside and outside focus when star testing, whereas the 16" has a very "hairy" extrafocal diffraction pattern, but clear intrafocal.... even though both mirrors are same thickness and are under the same environmental and seeing conditions when ran side by side, the 16" performs a bit worse under high magnification.   When it comes to strict planetary viewing, my 12" with good figure is competitive with my 16" with meh figure.

Hopefully the only aberration in my 16" is a TDE and an aperture mask improves it...once that is done, the 16" masked down to 15" (effectively turning it from f4.5 to f/5) should be a stronger performer.   For lower power non-planetary views on the other hand, the 16" blows the 12" out of the water.


Also tagged with one or more of these keywords: cassegrain, catadioptric, dob, reflector, SCT