I've recently started having problems with maintaining collimation on both sides of the meridian with my C11 EDGEHD and set out to recollimate as I have a number of times in the past.   This time I don't seem to be getting the collimation results I expect, even staying on one side of the meridian.   I start pretty far out of focus and get the secondary shadow centered and then get very close to focus to finish collimation.   The problem is that when I get very close to focus the light doesn't collapse to a point but appears to flare out to the side at my best collimation attempts with the star centered in the FOV.  I used meta guide to capture the picture close to focus below. 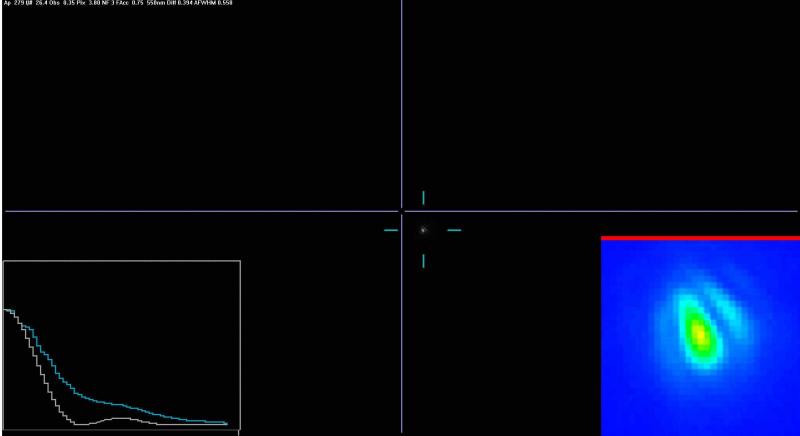 Am I right that something isn't right with the collimation and can you point me to whether this is just that I haven't sufficiently collimated it or is something askew that's preventing good collimation?

Thanks for any help with this.

That is a nice result - and the good news is that it looks exactly like atmospheric dispersion as captured and simulated here:

When using MG for collimation it's important to use a star that is very high up - and preferably a red or IR filter.  This is because MG will capture details of the star shape that look like coma - but in fact are the way the star actually appears as distorted by the atmosphere due to dispersion.  Coma has a very different diffraction pattern even though it is similarly elongated.

So my guess is you are using white light and a star lowish in the sky.  If that isn't the case then we can consider other things - but that sure looks like dispersion - and you can go crazy trying to collimate it out - because it won't.  It's supposed to look like that - in white light anyway.

The amusing thing is that visual observers always report seeing nice round Airy patterns no matter where they look in the sky.  But when you actually capture the data objectively so it can be shown to others - a different picture emerges.

I took the picture a few weeks ago and don't remember whether it is from a star near zenith or a low one - I was alternating between both low and high stars that night.   I was definitely using my Lum filter and not IR or red.  Given your input I will attempt again making sure I am collimating on a high star with a red filter and see what I get.


Also tagged with one or more of these keywords: collimation