Last night I was trying to grab some narrowband data. After slewing around (see what I did there) for a while I finally decided to start grabbing data on the Witches Broom. But my 10 min subs came out with some wonky oblong stars. The guiding looked really good last night and was sub-pixel guiding...

I've never had this issue crop up before now. I have had to move my mount between front and backyards a couple of times in recent days, but I doubled checked this morning and everything is tightened down well. I'm using a piggy backed guidescope a 60mm Stellavue with my ES127ed that has a flattener reducer on it giving me a final Focal Length of 667mm on the main scope.

Any suggestions on recovery of this data? Any suggestions as to what the issue with my data could be (as I said it would appear to be a hardware issue for me, but I'm not sure).

I have done 5 and 10 min subs in the past with this setup without the issue which is why I’m thinking I must have had something new hardware wise creep-in but I won’t rule out any possibilities. 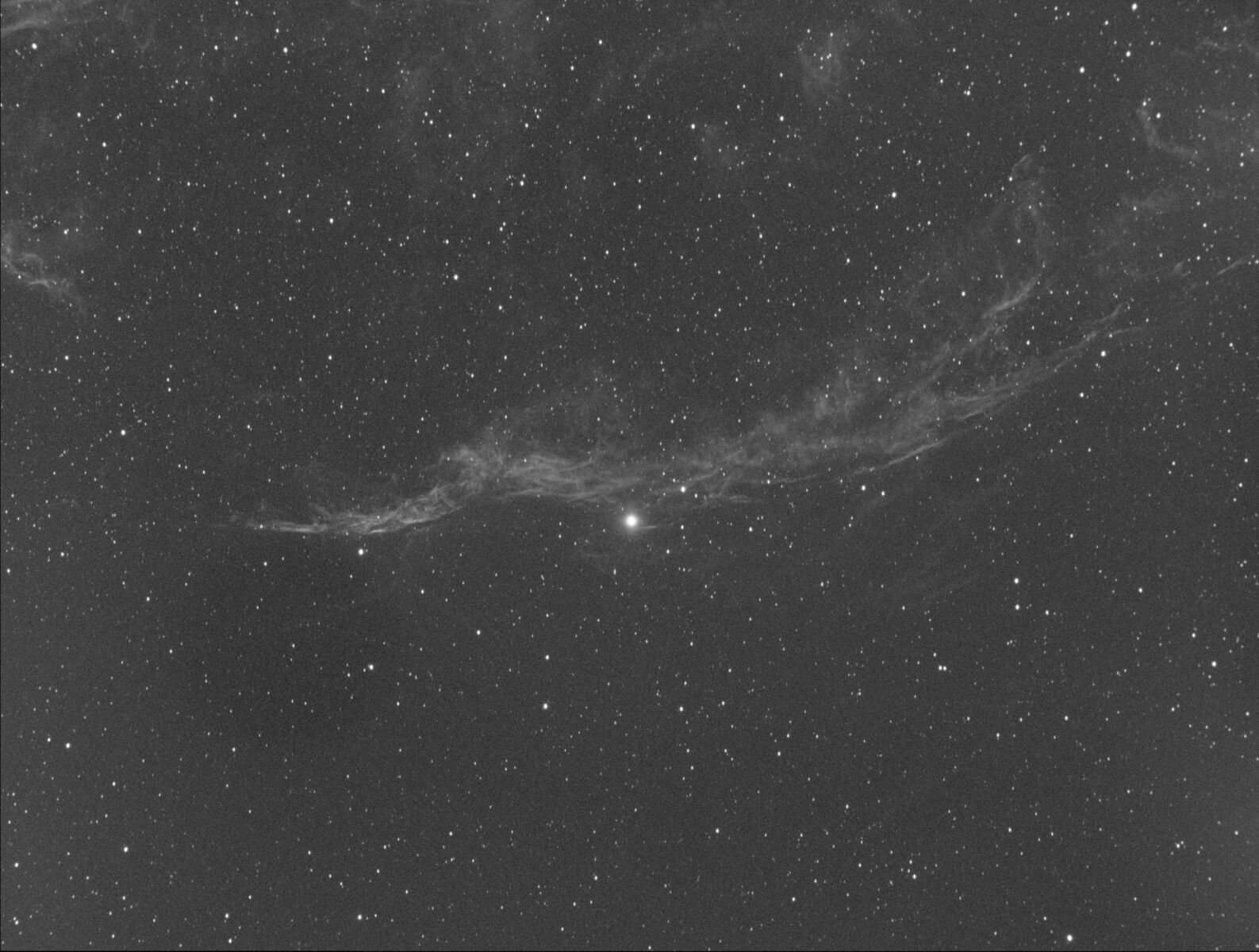 Good guiding  + oblong stars = flexure.  Guaranteed, every time.  All you have to do is figure out what is flexing and in which direction.

Flexure is the likeliest cause.  If this were wind, the guiding would have degraded.  Usually with flexure you also see a gradual drift of the image where the DSO moves slowly across the frame.  If you have a program that gives stacking offsets, you can see the drift there also in a consistent pattern of increasing or decreasing offsets.

How is your guide scope attached?  A one point connection would be more likely to produce flexure.   Are your cables secured near the imaging camera and the guide camera?  Changes in cable weight can cause flexure.  Check all the guide camera connectors also.

There are programs, like Star Tools, that will globally round stars using a star mask.  In Star Tools the "Repair" button is used after tracking is shut off.

Can you show us an image of your setup? It would help to verify the flexure. Sometimes the setup is fine but the wires hanging/catching and such are causing the the flexture.

definitely flexure if the guiding looked good. You could load subs into DSS and register to see the amount over time but that doesn't fix the issue.

I know this kind of 'issue' can be fixed in something like PhotoShop fairly easily. It usually entails selecting the stars, duplicating the layer, and using a darken blending mode. You can nudge the layer to fix. with your data, it would be up or down.

Is 600s a typical exposure for you? Wondering if this is a new thing or you just noticed it because you went with longer exposures. This is the reason why I went to OAGs and never looked back.

OK, I will be the contrarian here. While differential flexure is the most common cause for oblong stars when guiding looks perfect, it is not the only possible cause.

It can also be the result of polar alignment error. If the mount is not well polar aligned and you are guiding perfectly on the guide star, you may experience field rotation during your imaging session resulting in oblong stars.

There is a very simple test to determine whether you are dealing with differential flexure or field rotation due to polar alignment error. Try this with your data:

This is one of the quickest ways to debug the two most common causes of oblong stars when guiding looks very good.

First, thank you all for responding.

Gipht - My guide scope is attached via the Stellavue finder ring, with the wedge type foot on the bottom, this is screwed onto my Moonlight focuser.  There is only 1 screw to hold it, I could try swapping to the squeared off foot instead of the wedge type foot, the moonlight has two screws to hold that style.

Also I did do something new with my cables.  Before I had been letting all the cables be realatively loose, I would route them through the best I could and use from velcro tape but for the most part the wires were everywhere.  I just recently purchsed a set of "gear ties" and I started to "bundle" all the wires up and route them down the "middle" of the mount (I have an Orion Atlas so I route the cables between the two scope retention screws).  Maybe I've tied up the cables too much?

scadvice - I'll try and upload something soon, but I don't have anything recent, it will be an older picture.

Dan - I will try the advice here about stacking to see if it was indeed flexture.  Mostly I'm hoping that this data can be recovered because I don't get to image as much as I used to.  I had been doing mostly 120 and 300 before.  I have pulled off a few 600s in the past so I thought I might be able to make this my new narrowband standard.  I have been considering the ZWO AOG, with my ZWO 290m-mini I think it would work pretty well.

Well john, interestingly enough the non-aligned stacks came back with what I would call a "triplet" effect.  Where the stars kind of rotated around a point as you suggest.

This actually causes me more questions than answers though, as I use a polemaster for polar alignment and that night I got pretty well "spot on", at least I thought I did.

I'm going to have to experiment...   I'll run through the polemaster routine, then I'm going to try drift alignment and see what kind of error I'm seeing after I use the polemaster.   Either that or maybe I forgot to lock down one of the adjustments or something...  Lots more to check now.

I am not sure I understand but that doesn't sound like field rotation. Your description seems to indicate that each star seems to rotate around a point near each star. That is not what you are looking for and sounds more like the results of dithering. The effect of field rotation will be small straight lines that are not parallel to one another in all parts of the frame.

Would it be possible for you to crop a tiny section of the unaligned stack and show us at full scale?

Here is a classic example of field rotation as reveal by an unaligned stack of images from my data collection from 2008. 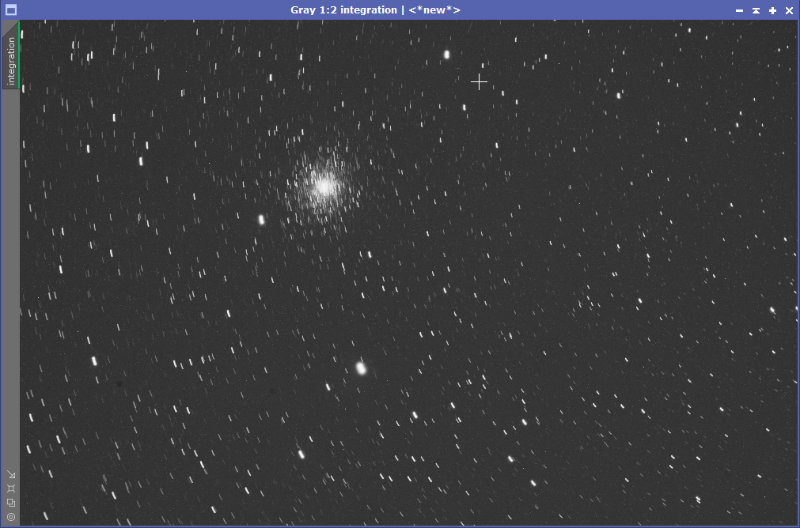 Note how all the little streaked stars seem to rotate around a point in the upper right portion of the frame. That is where the guide star was located.

Figured maybe the best way was to grab a screen capture from pixinsight at 1:1

The stars are "tripled" and that pattern repeats through the image.

This represents a combination of 4xHa, 1xOiii, and 1xSii  all at 600sec

I actually had dithering turned off for this run (I'm using Prism and was taking these subs manually while I was doing some other things).

What does your first frame look like compared to your last frame? Do they overlap evenly around the frame, and are different only by the amount of dithering?

OR is the first at some diagonal angle compared to the last?

Alex - I'd call it a diagonal angle I guess.  I'm using pixinsight to overlay the "youngest" on the "oldest" (first taken, last taken) and I guess I would describe it as a "left/right" shift?   Basically everything shifted over

So I'm guessing the egg-shaped stars have to be some kind of flex going on,   the "false dithering" is something else I have to figure out (could have been from me messing with stuff that night, shooting manually instead of letting the program do it)

You can round the stars some in processing.  In PI, MorphologicalTransformation is a possibility.

Using a finder shoe is asking for flexure problems.  The cure is to mount the guidescope in two rings, attached to the main scope over some distance.  Triangulation is very effective for increasing stability.  A few examples here, scroll down.

The more I think about it the more I'm leaning toward getting an OAG.  I read that the 290mono mini I use as a guide cam works really well in these setups.  I also change out my flatenner/reducer for just a flatenner depending on targets causing my focal length to change (667 to 957).