Using an Old Tablet and Webcam as a Finder

I'm sure many others have thought of what's described below, but I've been out of telescope stuff for many years, I'm new to this forum and haven't seen it yet.  Maybe this will be an appropriate contribution in return for the wonderful help I've received here.

When aiming a scope, there's nothing I like better than getting behind it and lining it up on the target.   I've used Telrad type finders and green lasers, but nothing beats what I came up with this week.  I hooked up an old webcam to an old Android tablet and mounted them on my scope.  The webcam is in a simple mount with three spring-loaded screws with thumb nuts for adjustment. For the tablet, I found a screen overlay that puts a red bullseye smack in the middle.  The tablet is mounted just above the focuser.   I just have get behind the scope once to point it at the desired object, then when take my seat at the eyepiece, that object is somewhere on the screen.  I just move the scope until the object is in the bullseye.  The ring around the bullseye is serendipitously about the same field of view as the eyepiece at 300-350 power.

The first image below is a result of aiming my camera into the eyepiece simply to capture the field of view, NOT to take a photograph of Jupiter and its moons.

The second image was taken immediately after the first, so it shows where Jupiter appears in the bullseye.  You can just barely see the targeting red dot in the middle of the bullseye.  Jupiter is not superimposed on it because Jupiter is not centered in the eyepiece.  So you can see just how much give there is.

The third photo shows how the tablet and webcam are mounted on the scope. The webcam is in the light colored wood frame at the top of the screen just over the tablet. Just visible is one of the adjustment screw-springs.

The tablet is a Dell Venue 8, but any cheap and generic Android tablet will do. The USB camera app is USB Camera by 沈垚 / ShenYao China.  The bullseye is Screen Overlays by Andrea Bresolin.

I highly recommend disabling wifi before running such apps, otherwise you'll likely see ads.   Or pay $5.49 for the pro version of USB Camera.

The webcam is a Microsoft Lifecam 3000 with the lens removed and replaced with a longer lens more appropriate for high power use.

An excellent example of the concept of "seemingly obsolete technology will always be at least as useful as it started out to be", assuming you can keep it working.

Jupiter seems to be the only thing on the screen. What magnitude can it go down to?

Jupiter seems to be the only thing on the screen. What magnitude can it go down to?

I've wondered the same thing.  This session was photographed close to downtown in a metro with a population of 2,000,000, so you can imagine the light pollution. Right now I'm interested in planetary photography such that dark skies are not as much a requirement.

Having said that, I was using what I had on hand.   I've not needed to try another camera for this project,  but for an ulrelated security project, I bought this USB camera, which has a much larger and more sensitive sensor than most (.001 lux!) and makes the deepest twilight look like full daytime.  Plus, it accepts M12 lenses that can be cheaply bought on Amazon, so the field of vision can be widely varied.  I feel certain it would perform well for this purpose in a deep sky environment.  https://www.amazon.c...customerReviews

I see that the model I bought with a housing is out of stock now, but the manufacturer sells the boards (spinelelectronics.com).  Amazon has this, https://www.amazon.c...ctronics&sr=1-3 which is probably what I'd buy now if I wanted to use an ultra low light camera.  It comes with a 2.8-12 mm lens, yielding 85 - 25 degree FOV (width).

Planets/bright stars should be easy find with your approach but you might find it difficult using the webcam to find DSOs due to the lack of long exposure controls. I use a security webcam like yours as a guidecam and it maxes out at 0.5 sec exposure.

There have been discussions in the past on using low light security webcams for EAA with live stacking using sharpcap. Some people have been reasonably successful, but the two main issues have been,

2. Inability to get RAW images out of the webcam (live stacking works better with RAW).

I used an action cam (replaced the lens) and platesolving to act as an accurate finder for deep sky objects described below. It allows upto 8 second exposures and can be hacked to get RAW, but the connection is over wifi (therefore slower than usb)

Back in 2003 I did the "SC1 (Steve Chambers 1) mod to a webcam that was popular among people on the Yahoo QCUIAG site (still active, but they long ago moved on to better hardware). Iirc it would take up to 30 sec exposures with the mod.  Attached it to an Orion 80mm refractor for guide scope, and also used it with a Powermate on the main scope to stack hundreds of 30 sec exposures.  These days I expect you can buy much better equipment from manufacturers.  For me the main advantage would be in locating DSOs. For that you would likely have to mount the webcam on a small refractor and stack exposures with a short delay.  I haven't kept up with this.

The ultra low light camera (.001 lux) is demonstrated below.   This is the one I bought for security from spinelelectronics.com.  I just connected it to the tablet, and it displayed stars as dim as 4.5 magnitude. I was under a streetlight and it was on autoexposure, so I expect it can do better.

I couldn't take a screenshot while operating the camera, too much fiddling to be able to keep the USB plugged in, which, I've discovered is a hazard with this setup.  I'm looking into a wireless solution to reduce wear and tear on that tiny USB connector.

Anyway, I used my phone to take the shots of the screen.  Magnitudes are labeled.  This was all handheld, so pardon the quality.   Above the photos is a screenshot of the star chart app for comparison. 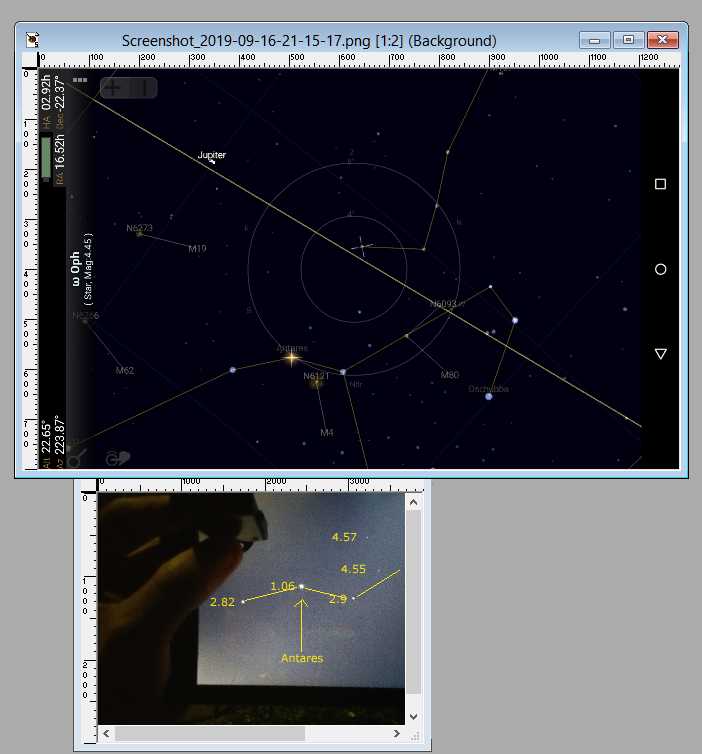 The ultra low light camera (.001 lux) is demonstrated below.   This is the one I bought for security from spinelelectronics.com.  I just connected it to the tablet, and it displayed stars as dim as 4.5 magnitude. I was under a streetlight and it was on autoexposure, so I expect it can do better.

It depends on what you want to do with it.  Mag 4.5 might be good enough if you want a RDF/Telrad like experience. A longer (2-3 second) exposure, if the camera and software support it, even with a  small M12 lens should get you to Mag 7 stars in LP skies. With platesolving this will let you identify sections of the sky where you cannot see any stars with naked eyes.