Note to Moderator: please leave this post in "Equipment." It is part of a series that I wish to be kept together. Thx.

OK, you've been using your 8" Dob for awhile and it's been really cool. For example, you can star-hop to objects, you enjoy the ever-changing disk of Jupiter, and some of the DSOs are really interesting (although others seem too faint). Nonetheless, star-hopping at Bortle 7 is a pain and ... gee ... don't you wish you didn't have to nudge ... nudge ... nudge to keep Saturn in the field? Now what?

All joy to you, you are now ready for a more capable scope. That might be a big Dob to blast through some of that light pollution ... hey ... you've used them at the club but live in an apartment and don't own a truck. Or you might really like the wide fields and crisp stars of club members' refractors but ... DSOs seem so, well, weak with the smallish apertures you can afford. Not to worry, I'll cover these types shortly but this post is about catadioptric telescopes--specifically Schmidt Cassegrains and Gregory-Maksutovs--and one may be just right for you.

Let's put the optics quality shibboleth to bed right now. Maybe you've read Suiter's book "Star Testing Astronomical Telescopes" or you have read complaints about "mush boxes" (i.e., Meade and Celestron SCTs) in some of these forums? First, the bad news. Everything Suiter wrote is true. You know, about the unavoidability of higher order spherical aberration, the need for precisely figured optics,  lowered contrast due to the large central obstruction, the drop in the MTF curves, etc.? Yep, it is nearly physically impossible to produce a SCT or short-tube Mak that will compete with a well-collimated 1/8 wave or better peak-to-valley (at 0.63 um) Newtonian or (expensive) ED/APO refractor of the same aperture and you are highly unlikely to find a mass market Cat (Celestron and Meade, for example) that meets this goal. But wait, the good news is this: it won't matter hardly at all except perhaps for the Moon, Jupiter, and Saturn, and once in awhile (near opposition) Mars. Even then, the views through a well-made SCT or Mak can be very good indeed (as Suiter suggests, my 8" yields roughly equivalent contrast to my very, very good 5" ED refractor) and perhaps not distinguishable from truly fine (and expensive) optics given average seeing! I am in my mid-sixties and recently purchased my first Cat to help me through my upcoming dotage. Mind you, I can still easily carry the 67 lb tube of my optically exquisite 10" Newt outside and lift it onto its GEM but ... maybe this isn't too smart anymore? Also, nothing discourages travel to a dark sight like disassembling my nice Newt and then securing all the pieces into the trunk and two of the four seats of my car. Anyway the Celestron EdgeHD 8" was on sale together with an AVX mount, and I bought one. The optics are quite good. Perfect? No, but very good, better that 1/4 wave wavefront error P-V at 0.55um. I bought one because I've star tested a number of SCTs manufactured after 2000 and found them all to be at least 1/3 wave (IBID) or better. Quality control has really improved since the bad old days of Comet Halley. I've looked through C-14s, C-11s, C-8s, and a variety of Meade scopes as well. All were/are adequate to quite decent optically. Both SCTs and, especially, Maks are long focal length telescopes. They will do well on the planets and smaller DSOs. The largest clusters (e.g., the Pleiades, the Andromeda Nebula) won't fit in the field of view.

The Cat, you see, is the perfect Jack-of-all-trades but perfect master of none. Its optics are very good but rarely superlative. Celestron and Meade mounts have improved dramatically over the years, and I invite you to read Rod Mollise's excellent history (links on this forum). Bottom line: both Celestron and Meade now offer "go-to" mounts that absolutely will place the object of your heart's desire into a low-power field of view. You are now experienced enough to set it up properly, too, hooray! A universe of DSOs, double stars, outer planets and asteroids, etc. awaits, even at Bortle 7-8! Cats are the most compact type of telescope for a given aperture and therefore the most portable. They are just the ticket for someone with storage space issues or who wishes to comfortably drive to a dark observing site in a modest-size car. Other advantages include availability of every accessory imaginable, comfortable viewing from an observing chair, and stable collimation (relative to most Newtonians, anyway). The corrector plate will dew up but this is fixable with a dew shield/heater. Also, in sizes larger than 8", cool down time to thermally stabilize the optics can take up to several hours, especially for large (>6") and therefore thermally massive Maks.

Now for a digression: I believe the 8"-11" SCTs and mounts manufactured by Meade and Celestron represent the finest value propositions in telescopes today. I can hardly believe, given the complexity of the optics and sophistication of the mount, say an 8" EdgeHD with a nice "goto" mount can be had for under $2K (on sale). Celestron created an entire market when its 8" appeared in the late 1970s. Crudely mounted on a fork equatorial and with optics variable in quality (to say the least), these sold like hotcakes for around $800; i.e., about $5000 in today's currency. Today's product is optically more consistent and mechanically in a different and better dimension (and yes, I have lots of time with the original C-8s) and it sells for 2/5 the price!

I'm going to warn you about "astrophotography." Sure, feel free to try imagery of Jupiter, Saturn and the Moon. I recommend having a look at Damian Peach's website to see what a pro-am can do. However, all Cats are long-focus telescopes and require extreme mount stability. It is about the MOUNT, got it? And the mount that came with your Cat telescope is probably too light for serious long-exposure astrophotography with it. That said, you can certainly unmount a modern SCT and in its place try a short-focus (50-100mm, depending upon the mount) high quality refractor of lighter weight and shorter focal length. Read the many posts about this in the "Beginning Imagery" forum. Oh, and you really should learn from experience here to help your way up the learning curve quickly. Local astronomy club members can help, and the imagery forum posts recommend several excellent books.

SCT or Mak? That depends .... While not exactly featuring wide fields of view, the focal lengths of SCTs are typically around f/10 and so shorter than a Mak--f/15-f/20--of equivalent aperture. Go with the SCT--the better all-around choice--if you want to observe the larger DSOs visually or are interested in astrophotography of DSOs. The Mak might be a better choice for the Moon and planets specialists given its slightly smaller central obscuration, particularly if you are interested in sizes of 6" aperture or smaller. Indeed the 6" and smaller aperture designs of both Meade and Celestron are very portable for their aperture and may suit your need for a "grab-and-go" telescope. Be aware, though, that the smaller aperture will limit visible brightness of DSOs, especially from light-polluted skies.

There are other brands besides Celestron and Meade. Takahashi once made a fine Cat built to the highest specifications and with a price to match. The 3.5" Questar, a Gregory-Mak design, is still available new after least fifty years in production and offers generally very high quality at a high price, although based on reading these forums evidently an optical lemon slipped through once in awhile. Used Questars of 7" and 12" apertures rarely hit the used market and are very high in price. So too for the Astro-Physics 10" Mak. The Russian maker Intes manufactured 6" Maks for a number of years, and these are well-regarded but not without minor warts (read the forums here).

Insofar as actual brands, some swear by Meade and others Celestron. You can find myriad discussions of both in these forums. Try both out at your local astronomy club (yes, that is a theme!) and see which you like. Personally, I like Celestron a bit better. I think Celestron's SCT optics are a bit more consistently acceptable in sizes of 8" and larger. Also, Meade and Celestron offer slightly different emphases on mounts, so do your research before deciding.

After fifty years of amateur and professional observing, and also designing and building space-based telescopes, I personally would choose an 8"-11" SCT (depending upon your trade of aperture vs portability) if I could have only one telescope. But, as you will read dear reader, that is not the case, to be continued....

I own a Mak, and agree with your assessment of them.

One should mention the fact that the Orion Apex 127mm Mak is essentially identical to the Celestron NexStar 127mm Mak, since both are manufactured by Synta: 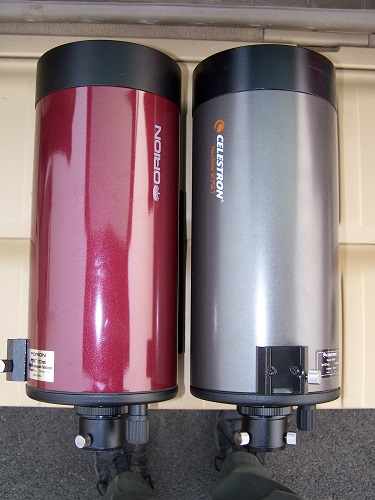 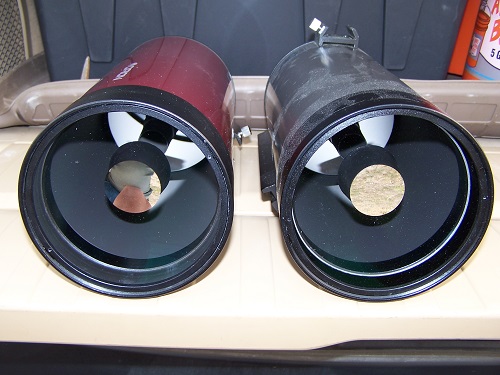 What I don't like about Maks is that they tend to weigh substantially more than the equivalent size SCT.

I can't remember the last time I took out the Bosma 150 Rumak.

Admittedly, the C90 Mak is a pup compared to any of these.

IMO, if you're moving to a cat to have goto, get an SCT. You want the goto for deep sky and the Maksutov doesn't have a large enough field for many objects. Even the SCT is a bit limited in this regard, but a Maksutov is much worse.

I would also add that it generally makes a lot more sense to get that SCT on an equatorial mount (since it can carry the apochromat you'll probably want next) than a fork.

I agree, except I avoid GEM's.  I've been using them off and on since the early '70's.  My first telescope was on a pedestal GEM.  I don't like their uncomfortable movements and extra weight.  I like a decent alt-az on a tripod for refractors and Cats.

Nice write up! And it doesn't even scratch the flexibility of the EdgeHD system with a Barlow, .7x reducer, and Fastar/Hyperstar.