Could large diffraction spikes be because the "dot" on the primary is too big?

In my case, the mirror is 110mm, f/6 or so I would say and I am using the triangular reflective "dot" supplied by Astro systems.

When looking at Jupiter it looks like the diffraction spikes are larger. They tend to distract - perhaps blur? I did recently add them.

How large would a "dot" need to be to interfere?

The dot is hidden by the shadow of the secondary so it would have to be larger than the secondary mirror.  That is very unlikely If I am remembering correctly, this is a Tal scope.

When you say large spikes, do you mean wide spikes?  Each point of light produces a diffraction spike, the image is the sum of the spikes so Jupiter does not produce spikes but rather bands that are the width of Jupiter.  Diffraction reduces contrast in proportion to the area so the spiders contribute a small amount, the secondary itself more.

The triangle is always in the shadow cone of the secondary for the on-axis object, so it will not cause diffraction there.

The diffraction spikes (from your spider) are "larger" because every part of Jupiter produces one, so they are exactly one Jupiter wide ;-). And the parts that are outside Jupiter distract but do not blur; the part in Jupiter does blur but the energy contributed is fairly small and the contrast change really tiny -- you see them outside of Jupiter mainly because Jupiter is very, very, very bright compared to the background. The secondary's diffraction has a lot more effect, and concentrated closer to the source (which is bad -- you'd rather see it throw energy far from the source, as in the spider diffraction, outside of the Jupiter you're trying to observe).

Thanks for your kind help, the spider on this unit is fairly thick and could be contributing to the spikes.
It's good to know it isn't the dot.
Probably noticeable due to the extraordinary brightness of the target.

If you have any screws, boltheads, nuts, the focuser drawtube, or anything else poking into the light path, you’ll get extra diffraction spikes in addition to the diffraction caused by the spider. Even the clips sometimes used to hold the primary mirror can cause spikes.

I have to get to the bottom of this.

Before, there were no diffraction spikes.

Here's what got done:

Mirror was raised 28mm to allow modern eyepieces to be used without a focal reducer.

An Astro systems triangular 'dot' was added to the center of the mirror to ease collimation - this is new.  Even though it is smaller than the secondary - I still have my doubts...

Picture of the triangular 'dot' I mean 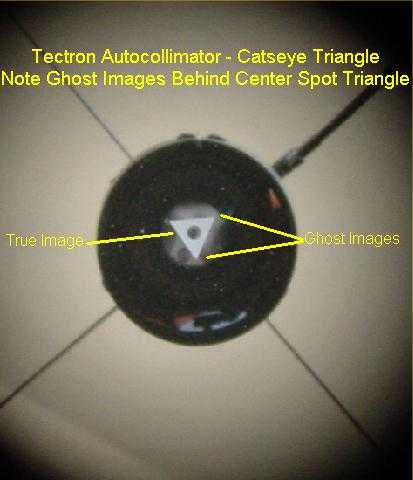 Stability of the mirror was improved with a small slice of card in the side, which rises above the mirror (I left it like that to easily remove it).  Is that it?  perhaps..

Baffling (it was fine - so that's not it)

Everything else is stock.

Could raising the mirror (which makes the scope faster, and closer to the spider) have undermined the fine soviet engineering that went into this scope?

One final thought - it could be, that when the mirror was raised, it moved closer to one of the walls.

It shouldn't of course - but let's face it, it is being raised 28mm.

When that happens, could it be that the side of the tube itself is in the light path - causing the spikes?

I have to get to the bottom of this.

Before, there were no diffraction spikes.

As far as I can see, the triangle is hidden behind the secondary shadow.  I am right on this?

Are there 3 spikes or 4 spikes?

Moving the primary mirror closer to the spider doesn’t make it any faster.
The triangle you mention looks bright/shiny.
Like others, I doubt it’s causing a problem, but if you suspect it might, paint it flat black.
I DO wonder why, in the image you posted, one of your spider vanes looks so much fatter than the other 3. Is this just an illusion? If it’s turned a bit, and presents a larger projected area to the light path, it will cause a lot more diffraction.

If you're seeing 4 diffraction spikes--that's the spider.

If you're seeing three, I doubt that it's the triangular center marker, unless it's bigger than the secondary mirror. (I know that the image you provided in post #6 is not from your scope.)

Moving up the mirror 2.8cm reduces the effective length of the tube, so it changes the original f/7.3 slightly I would have thought.
The picture is just showing the “dot” type.
There are four diffraction spikes, and with Jupiter, 4 bands.
The brighter it is, the brighter the diffraction spikes?
I do have a theory - I baffled the tube and also use modern high transmission eyepieces. That would I imagine increase the brightness of the objects and might explain why I now see diffraction bands when before I didn’t, right?
I don’t think it would be a pinched primary, it is very even and the stars are pin pricks.

Moving the mirror doesn't change the mirror.  You could take it out of the tube, but it still would be f/7.3.

If you’re seeing 4 diffraction spikes, then they are likely due to the secondary support vanes.
IF you have an optical surface that is unusually dirty this can exaggerate the appearance of the diffraction spikes. So make sure you don’t have a film of grease or dust on a mirror or lens.

The ‘speed’, or f/ratio, of a mirror is its focal length divided by its diameter. This is a fixed quantity and is independent of how the mirror is mounted.

The mirrors are clean, though the secondary may need replacement as it has some corrosion around the sides.

It doesn’t solve the mystery of why the bands are so evident now - and not before..

I really appreciate the input.

As pointed out above, two of the bands will be more conspicuous because now you have a twisted vane. They should all four appear as thin as possible in the primary reflection, as seen from the focuser.

As pointed out above, two of the bands will be more conspicuous because now you have a twisted vane. They should all four appear as thin as possible in the primary reflection, as seen from the focuser.

Which one is twisted? I tried punching up the exposure and shadow detail (post #14), but I couldn't see anything obvious.

(I don't see any baffles either, although the front part of the tube interior appears to be flocked.)

I am wondering whether the secondary is truly positioned correctly.

perhaps if it is off center, that could explain unnaturally strong diffraction?

if it’s not Centers right, could it consider the vanes twisted when they are in fact straight?

Which one is twisted? I tried punching up the exposure and shadow detail (post #14), but I couldn't see anything obvious.

Gotta look _from the focuser_. Or is the picture in post #6 not your scope?

Gotta look _from the focuser_. Or is the picture in post #6 not your scope?

I am wondering whether the secondary is truly positioned correctly.

perhaps if it is off center, that could explain unnaturally strong diffraction?

if it’s not Centers right, could it consider the vanes twisted when they are in fact straight?

If you're getting four diffraction spikes at 90-degree intervals, it's the spider.

I notice in your images that your spider has some pretty beefy hardware inside the tube assembly near the tube wall.

It's possible that this wider hardware is no longer baffled after moving the primary mirror closer to the secondary mirror. And that could be the source of your "stronger" diffraction.

You could verify this by making a round cardboard baffle (find some black construction paper) that covers the wider hardware and see if the diffraction is reduced.

Excellent - something to try - I will update when I know more.

I have noticed the secondary is too low, so I have raised it, and centered it.

I don’t know if that’s it, but it probably doesn’t help.

I have also made a bit of a shield made of light absorbing material (same as the baffling) as an experiment to diffuse the diffraction bands.

The utter randomness is supposed to diffuse it.

It diffuses it but increases the energy, so it's counterproductive for detail on the planet.