Clouds didn't part until after midnight last night so I only got one target, but it was a good one, the planetary nebula IC 418 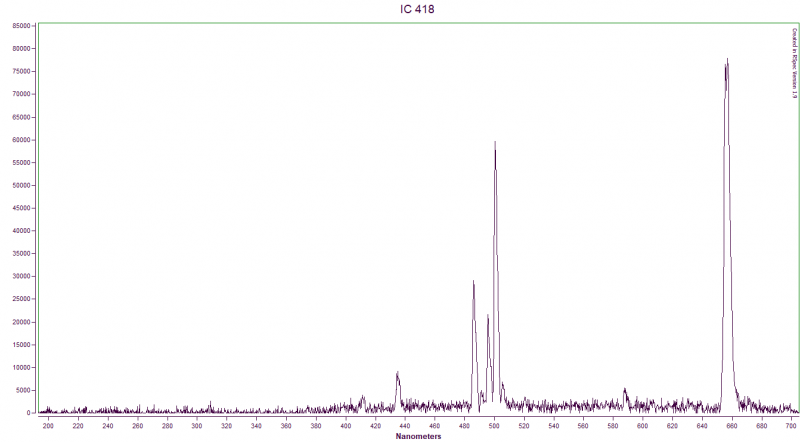 The intensity of the [NII] line at 658.4 nm is pretty big in this planetary nebula. I can't fully resolve this line from Hα at 656.3 nm, but the hump on the right side of the Hα peak probably is the [N II] line. 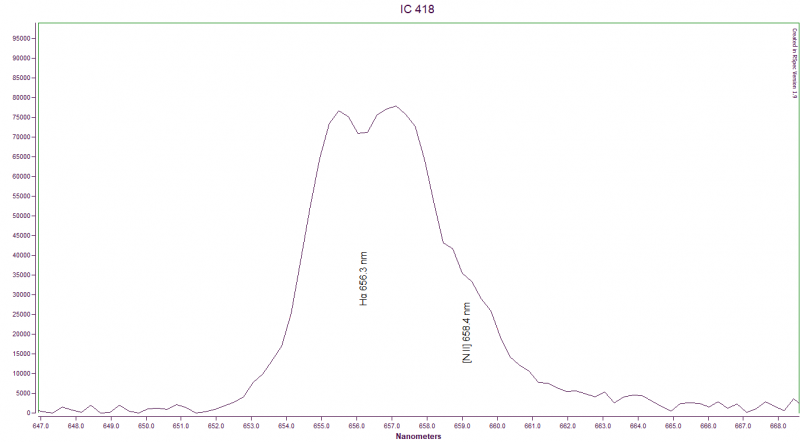 The double peaked Hα is due to the structure of the nebula. If you look at images of the nebula, the limbs are much brighter than the center and the two peaks correspond to the two limbs.
IC 418
I was able to resolve quite a few [O III] lines. 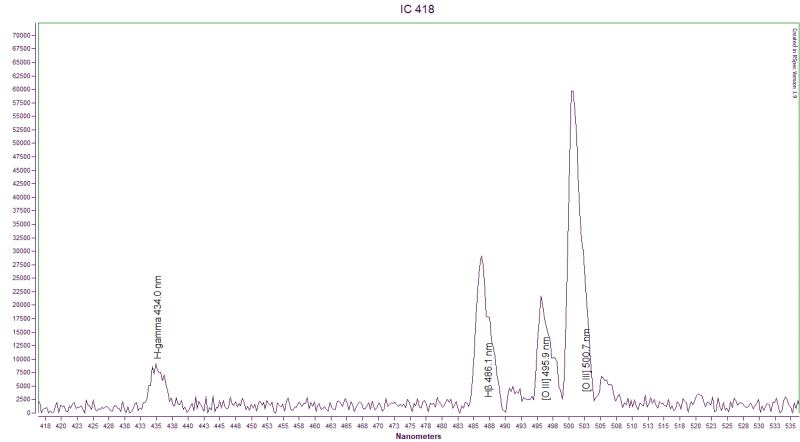 Really neat that you could resolve the lines that are necessary to calculate the excitation class with the SA-100. Beautiful observational astrophysics! I think the line at 436 nm is rather H gamma and the small bumps at 587 nm and 410 nm are He I and H delta, respectively.

Really neat that you could resolve the lines that are necessary to calculate the excitation class with the SA-100. Beautiful observational astrophysics! I think the line at 436 nm is rather H gamma and the small bumps at 587 nm and 410 nm are He I and H delta, respectively.

Thanks. Glad to see that someone is paying attention.

Clouds didn't part until after midnight last night so I only got one target, but it was a good one, the planetary nebula IC 418

Small and bright planetary nebula are indeed good objects for the SA-100 and I will put IC 418 on my list (although it is quite low in the sky at my location). Gurzadyan (the"inventor" of the excitation class concept) reports a value of 1.85=(N1+N2)Hß for IC 418 (http://adsabs.harvar...Ap&SS.181...73G). Experimental details were not given, but the data was probably corrected for interstellar extinction.

A good resource for finding small and bright planetray nebula, whichI consult quite often is "Planetary Nebula and how to observe them" by Martin Griffiths:

you can see  the spectra here

and some discussions on this on the ARAS forum

I've never looked very hard, but double stars as a target for amateur spectroscopists doesn't seem to come up that often.
Double stars are beautiful in their own right, but I have also found them very rewarding for lessons about human vision, optics, astrophysics, stellar classification, stellar evolution, star clusters, galactic structure and now spectroscopy.

The Washington Double Star Catalog says that the primary is B9.5V and the secondary is A0V and that parallax and proper motion suggest that the pair is gravitationally bound. As main sequence stars, it makes sense that the brighter is bigger and hotter.

However, Simbad says the primary is A1V and the secondary is A0V.

Sky Safari is pretty emphatic that the pair are unrelated, separated by 20 light years.

I have the grating so far back that I can't see the zero order spectrum (in this case the pair of stars). Here's a platesolved image to show the relative positions. Fainter secondary is up and the brighter primary is below. Some field stars are labeled (that are over one degree away). 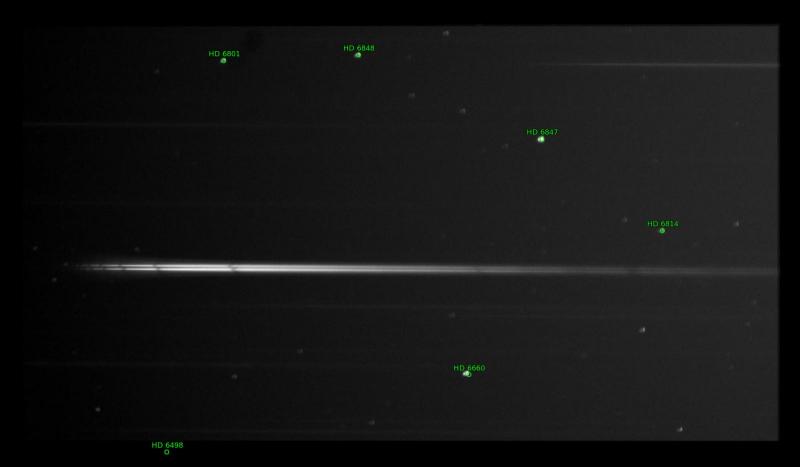 The separation was sufficient for me to get two relatively uncontaminated spectra.
The primary with an A2V reference (because I didn't have an A1V reference): 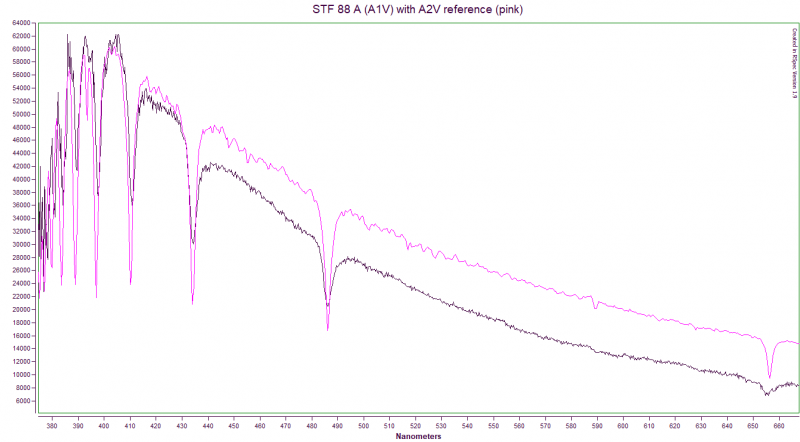 The secondary with an A0V reference: 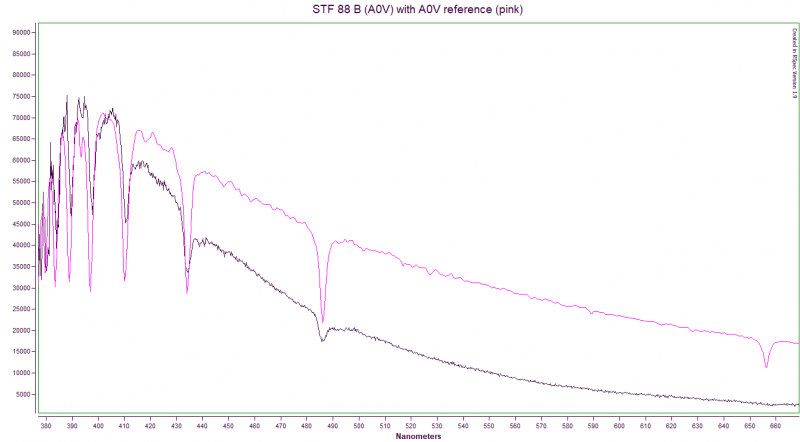 Then both the primary and secondary rectified so that the continuum had a value of 1: 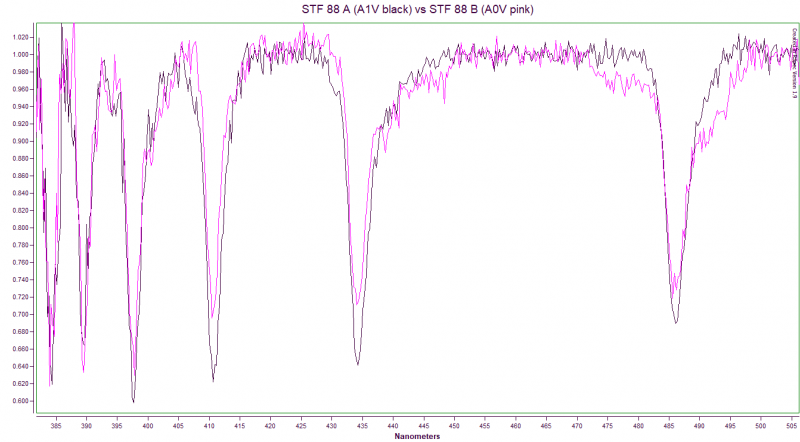 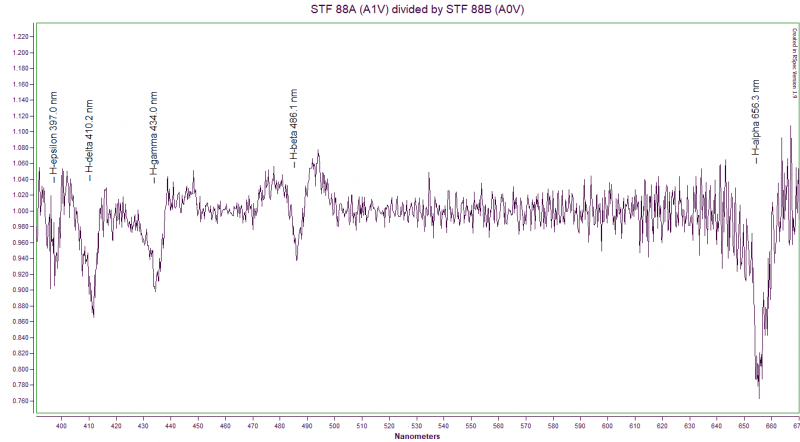 So this seems consistent with Simbad that the primary is cooler than the secondary. But if the two were a pair of main sequence stars at roughly the same distance then the cooler primary should also be dimmer. Is the primary actually much closer, thus making it brighter? Is the primary evolving off the main sequence and brightening? Are the two physically related?

Interesting questions, but I'm glad the Star Analyzer 100 was able to show me that the brighter star is actually the cooler spectral type.

What is the basis of the 20lyr distance difference in sky safari?  A quick calculation of the distances and uncertainties based the modern parallax measurements suggests that the measured parallaxes are not accurate enough to say whether or not they could be gravitationally bound. (The uncertainties appear large enough to allow them to be)

At this distance, a separation of 29 arcsec would equate to ~2500AU, potentially close enough to be gravitationally bound depending on where they are in their orbit

Dear Robin,
I don’t know where the information for Sky Safari comes from.

By the way, from where do you get your Gaia distance information? I’ve been using this catalog, but maybe there’s a better way:
http://vizier.u-stra...rce=I/347&-to=3

I used to think that people had a good handle on the absolute magnitude of a star if they knew the spectral type and luminosity class, but maybe that still leaves a lot of uncertainty.

I’m going to continue observing closely matched double stars. I’d like to know what confidence I can have that the Star Analyzer can identify the hotter and cooler companion.

Yes there are other dimensions to stellar  classification that can affect the luminosity, for example metallicity, eg

Having said that, if these two stars are in a common system I would have thought the extinction and  metallicity is likely to be similar.

and noticed that the Gaia value for A had a rather high uncertainty (actually higher than Hipparcos), which perhaps explains why they quoted Hipparcos for A so it seems the parallax data is not good enough to determine if they are close enough to interract or not. (Perhaps sky safari is using Gaia for both which gives a difference in parallax equivalent to  ~25 lyr but without considering the uncertainties)

And just to add to the confusion entering 74Psc into Skiff's catalogue,

reveals some overlap  between the spectral types given for the two stars in the literature.

So much is inexact in astronomy that there is room for debate about a lot of it !

30 Arietis AB also known as STFA 5, may or may not be a physical system.

Stelle Doppie says that it is, but the GAIA data that I looked at seemed to suggest that they might be separated by at least 40,000 AU. Regardless, they don't seem too far apart.

Because the stars are relatively close to Earth and close to each other differential effects of IS extinction are likely to be quiet small, I think.

Here is an image of the spectra. They look quite similar.

My results are consistent with F5V, but it would be bold to say that I have proved that. 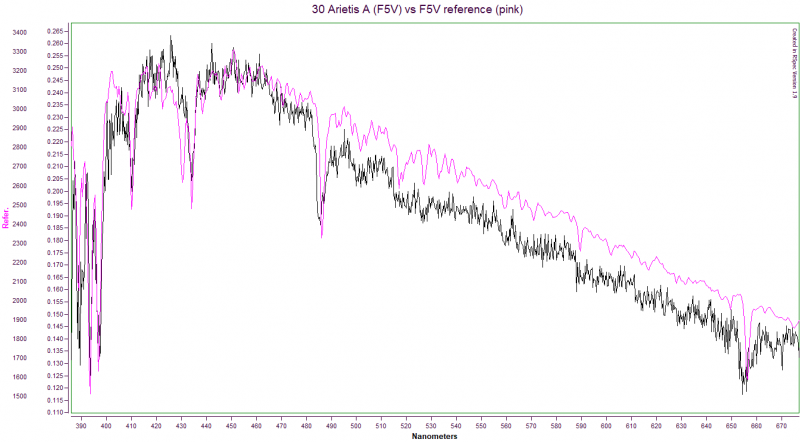 The secondary has been classified as F6V and F7V. My results are also consistent with that. 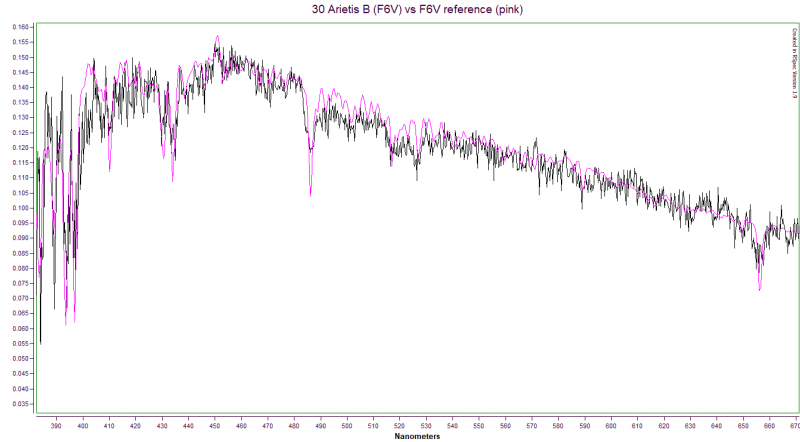 But what I am interested in testing is how confidently I can compare the two. Here is the comparison of the rectified spectrum. Based on the Balmer lines it is clear to me that the secondary is the cooler star, even though the spectral types are so close. The H-beta and H-delta are deeper in the F5V primary as would be expected because it is hotter and more of the hydrogen atoms have an electron in the higher 2nd energy level, allowing these Balmer absorptions.

This is encouraging. I have some other examples I'll post later.

As Robin has pointed out there is more that goes into spectral classification than just temperature.

I found this a very interesting article, unfortunately I think it is behind a paywall.

Basically, by judicious choice of a few spectral lines that have different sensitivities to temperature, surface gravity, metallicity and microturbulence, one could determine many basic stellar parameters.

Here are some more comparisons of nearby wide double stars.

Chi Ceti and EZ Ceti are nearby F and G type stars. Because EZ Ceti is two magnitudes fainter the S/N is much worse. In the future I will have to compensate by acquiring many more images for the fainter star.

Later I will also fully explore the possibility of distinguishing luminosity classes with the star analyzer, but I think that Chi Ceti (HD 11171) is better classified as F0V rather than F2III 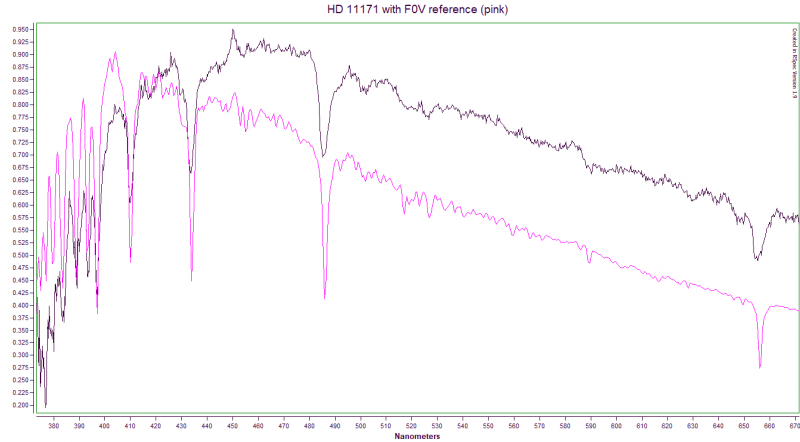 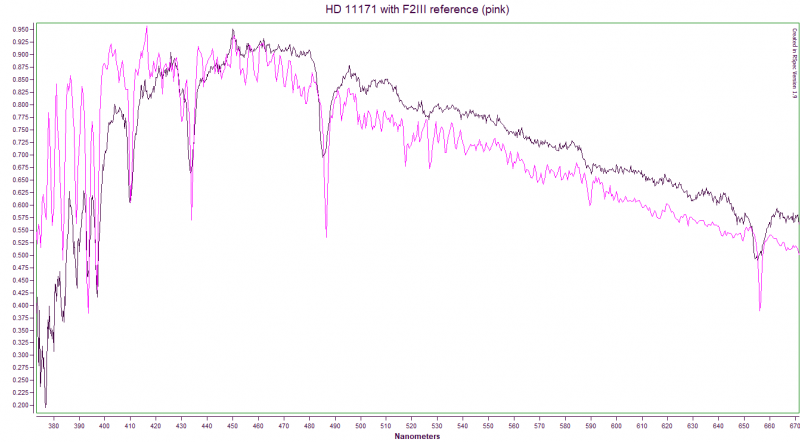 The S/N isn't great for EZ Ceti, but still consistent with G3V. 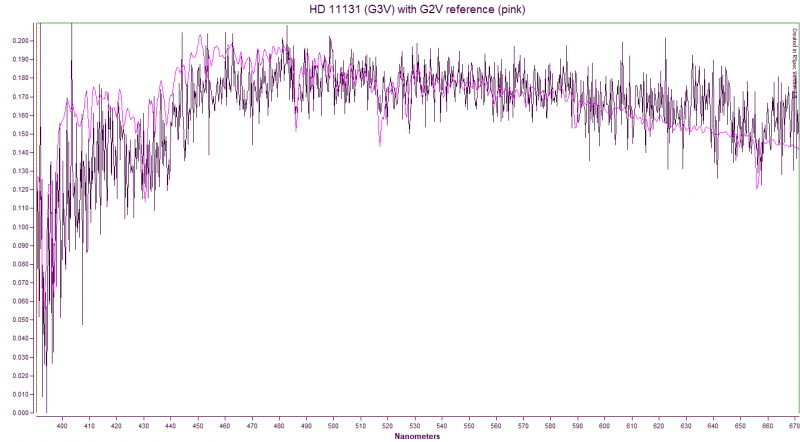 When I compare the two rectified spectra, no surprise that EZ Ceti is cooler, with shallower Balmer absorptions. 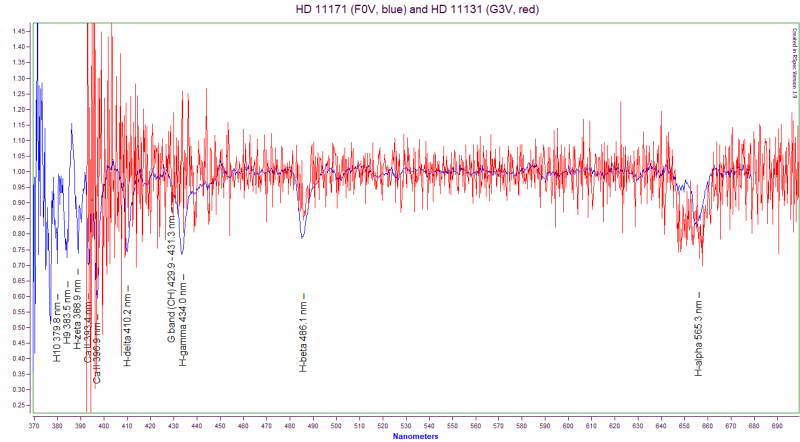 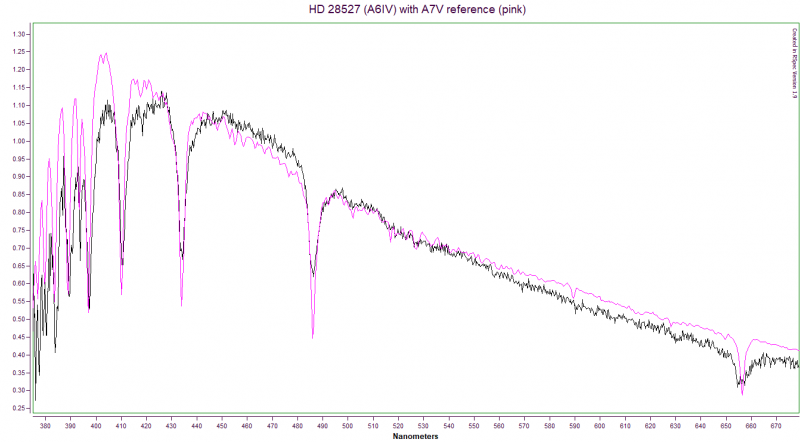 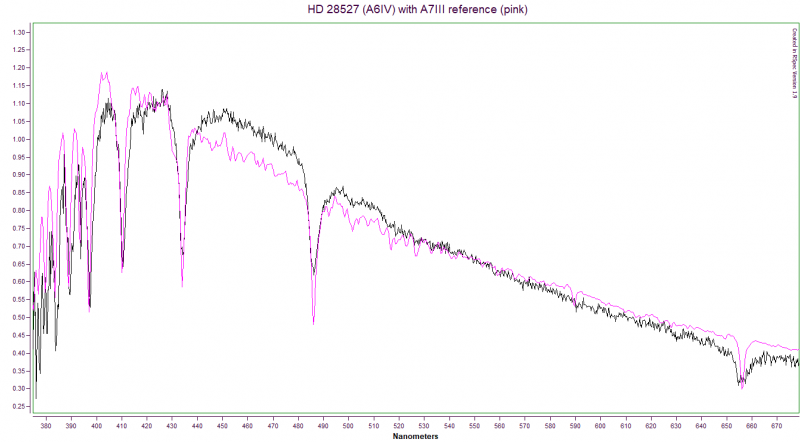 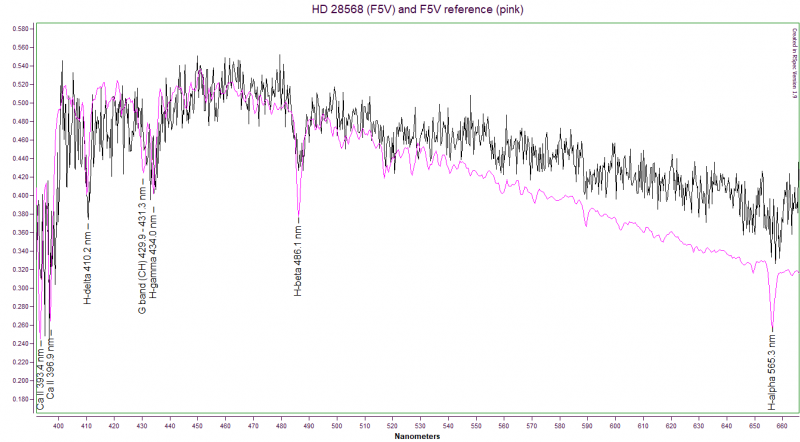 Obviously with such a large difference in classification it is obvious which is the hotter star. 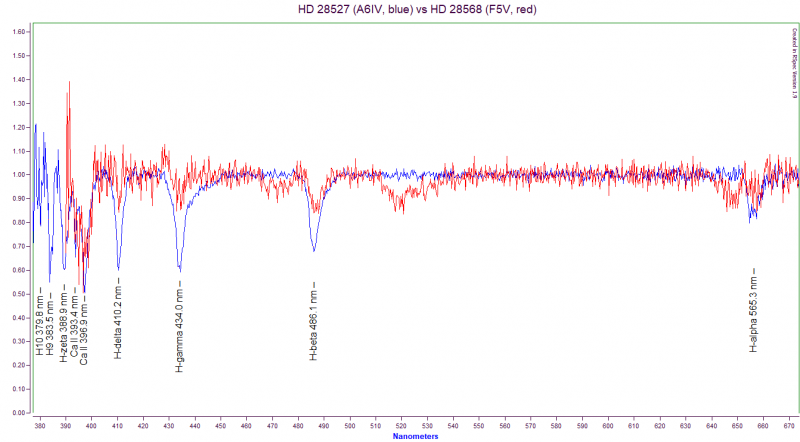 Here's a comparison of Alpha Camelopardalis taken with the Grab-n-Go system and with the Alpy.

With the Alpy 600, the lines across the spectrum are much narrower especially the C III and Hα lines, which are on the red end. 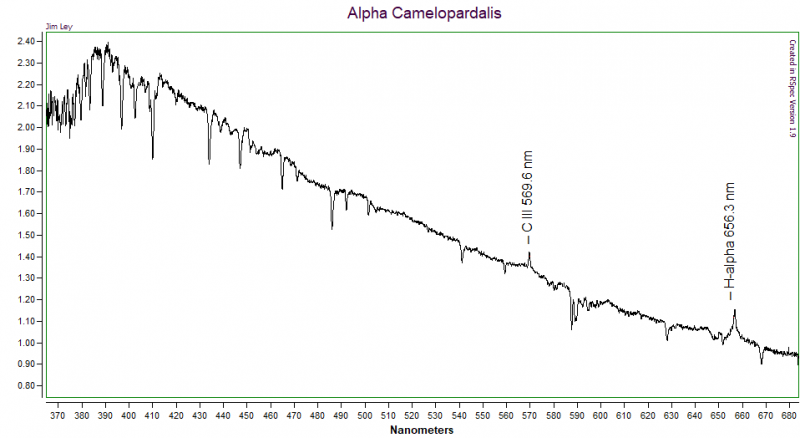 With the Star Analyzer without the wedge prism those lines are greatly wider. So much so that when I took this spectrum I missed the C III line which is unmistakable with the Alpy. 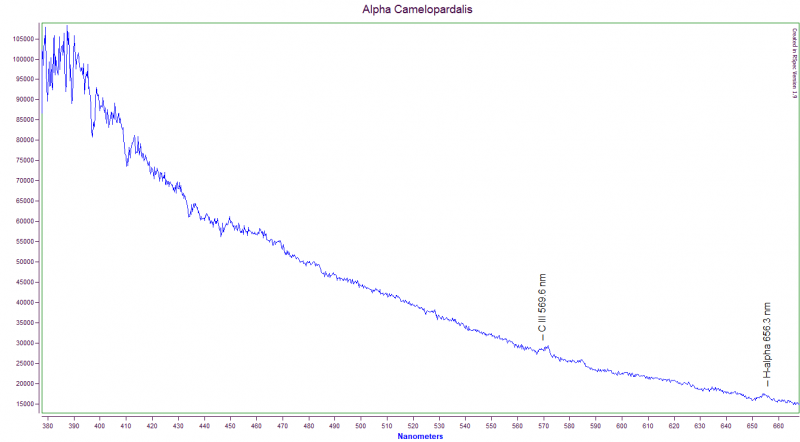 I'm glad I have both systems. When I don't have time for the Alpy, I can always get a few spectra with the Grab-and-Go system.

I'm glad I have both systems. When I don't have time for the Alpy, I can always get a few spectra with the Grab-and-Go system.

Inspired by the grab and go concept, I have "upgraded" my MiniTrack system with a SA-100 as objective grating:

First light test object was the carbon star W Orionis. 20 frames at 20 sec were obtained during a short clear sky period and were stacked:

This spectrum compares well to the spectrum of the carbon star RY Dra from the BAA-database (R=430) which also shows silicon dicarbide (SiC2) bands  (https://britastro.or...ment=&plot=Plot).

Indeed, good to have a system that is installed and set up rapidly for unstable weather conditions.