NGC 891 is an edge on galaxy Andromeda 30 million light years away. One of my favorite galaxies. It looks like it's coming right at you.

I am wondering if binning my asi294 2x2 would help with my resolution? What would I be giving up if I did use binning? 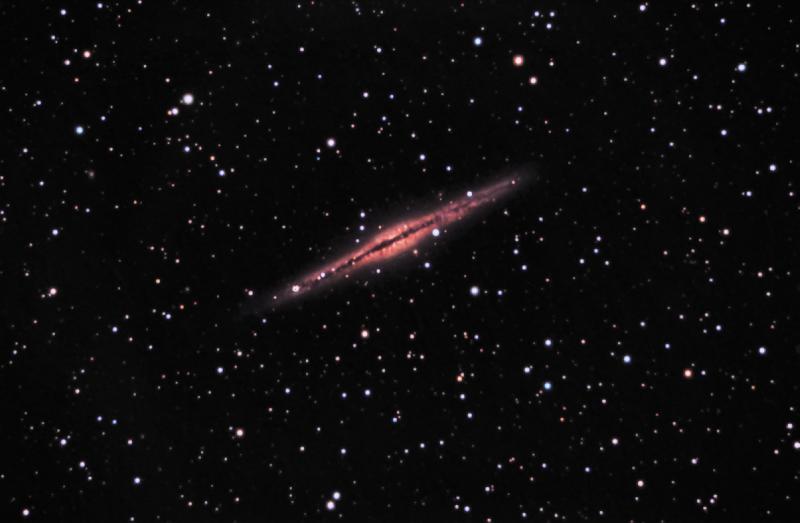 As far as I understand it, binning decreases resolution...

I thought I read that binning could help compensate for my typically poor seeing conditions. Thanks for the clarification.

As far as I know, there is no single reason for binning with CMOS. There is a reason to do it in case of CCD - reduce contribution of read noise, but even that is questionable.

So there really isn't any situation where binning would be beneficial for cmos sensors. I'm glad I asked before going through the trouble of making a 2x2 bin dark library. Thanks for the replies.

Most current CMOS sensors have low enough read noise that you get little benefit from on-chip binning vs doing it in post production.  The only exceptions might be SII or OIII narrow band imaging where signals are so weak that even a few electrons of read noise matter.

With CCD chips, read noise is often high enough that binning will help.  Honestly, though, for most objects you are better off just increasing sub exposure time until shot noise swamps read noise.  Unless you have super dark skies it doesn’t require very length exposures for read noise to stop being the dominant factor.  Again, narrow band might be the exception.

In any event, binning never increases resolution.  It only decreases it.  It can sometimes help with noise, as described above, but it never helps with resolution.

avarakin:  "As far as I know, there is no single reason for binning with CMOS".

I am very familiar with CCD binning, where it increases pixel size, decreases resolution, and increases dynamic range.  I was intrigued when the QHY600 BSI CMOS camera hyped binning, and the dramatically increased full well, but there didn't seem to be any on-chip way for the sensor to do that short of making four successive reads, at which the read noise/dynamic range argument goes out the window.  And that is exactly what they do.  So at that point, I was with you; CMOS binning is useless (except for reducing the image data that has to be downloaded).

But I got involved in a discussion in this forum on etendue recently.  At the time, imaging etendue (extending the formal optical calculation to include a QE factor) was defined as:

I and others pointed out a simple alternate arrangement that is perhaps better suited to AP comparisons:

I edited the OP's very helpful spreadsheet to add the rearranged version, here:

And here is his thread:

Imaging Etendue is a way to assess how quickly photoelectrons accumulate, in other words, it's the system's imaging speed, allowing comparisons on how quickly extended objects such as nebula can be imaged.

Modern and especially BSI CMOS sensors can have read noise that is five to ten times lower than CCDs, so the added read noise of three extra reads (for 2 x 2 binning) isn't especially material.  However, that larger pixel will accumulate photoelectrons at 4X the rate of unbinned pixels.  I'm pretty sure that this increases imaging etendue, and makes the system faster at imaging extended objects.  And this would be the case even if the "binning" was performed in post-processing.

Am I right, or am I missing something?